Nature is perfectly imperfect, and it is constantly evolving and adapting. The parts that are beneficial remain, while the parts that are not will be discarded or adapted to the changing conditions on the planet. Nature, through constant tinkering, has found some truly unique design solutions, from the trunk of an elephant to the spiny nature of a cactus. Even ant hills are designed in a way that allows cool air to circulate in and out, providing a comfortable home for the ants.

So, the world’s smartest designers and engineers have based many of our man-made technologies on nature’s designs. Believe it or not, there is a whole field of biology that deals with mimicking strategies found in nature to invent and develop technology. This specialization is known as biomimicry, which literally means “the imitation of life”.

Together, let’s learn about some tips mankind has picked up from nature’s elegant solutions.

The humpback whale is an incredibly large and magnificent creature. For something the size of a school bus, weighing around 40 tons, it swims remarkably well. The agility and precision with which it cuts through the water is simply genius engineering. Its ability to do this is primarily due to the bumpy tubercles on its fins.

The tubercles allow the whale to cut through the water with speed and grace by reducing the drag and resistance that the whale feels while swimming through the ocean. These tubercles have inspired the design of more stable airplanes, windmills, and submarines. Oddly enough, Dr. Frank Fish discovered these projections and their beneficial effects. He later founded a company called Whalepower, which produced more efficient wind turbine blades that featured similar projections.

While working out, I like to wear sports clothes, those made of breathable material that doesn’t hold your sweat. Stomatex®, a company that designs such sports clothes, developed a fascinating material that has pores resembling plant stomata. Just like how plant stomata are responsible for gas exchange in plants, the pores in the fabric allow for better ventilation, making the fabric more breathable. 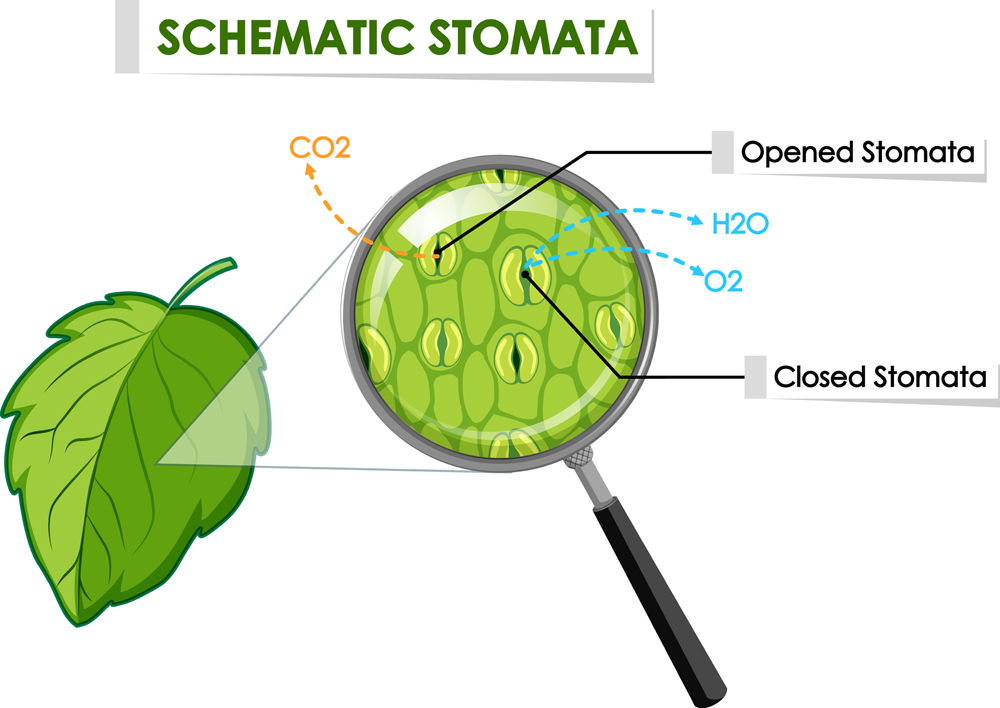 Stomata are found in the upper layers of plant leaves and stems. (Photo Credit : BlueRingMedia/Shutterstock)

The trapped vapor molecules that arise when our sweat dries can escape through the pores, making space for cooler and drier air to enter. This technology allows our skin to stay free from perspiration and maintains a more comfortable skin temperature over long periods of time. 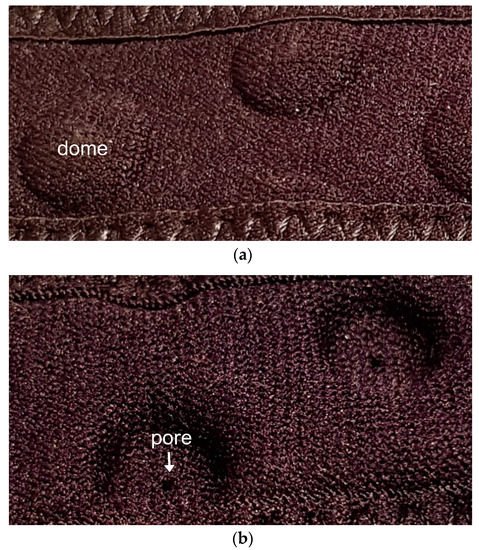 An up-close image of the Stomatex pores. (Photo Credit : mdpi.com)

This isn’t the first instance where nature has been involved in our fashion. A swimsuit called the Fastskin suit by Speedo has scale-like structures that sharks possess on their skin. These scale-like structures help reduce friction while swimming and aid in mimicking the hydrodynamics of a shark’s movement. However, one problem with this suit is that it’s really tight! It takes about 20 minutes for a swimmer to put it on and must be cut off in order to remove it.

Velcro®, a common fastener for clothes and wallets, consists of two thin strips of plastic sheets. One sheet has tiny hooks on it, and the other has tiny hoops. George de Mestral, Velcro’s inventor, was inspired to design this material after noticing how plant seeds were able to hook securely to a dog’s fur.

The kingfisher and the bullet train

Japenese bullet trains are famous for their speed and ingenuity, but they didn’t start out this way. The original design of the train unfortunately created a deafening boom as it zoomed by at an astounding 300 km/h, disturbing the surrounding residents and wildlife.

The solution came from an unexpected place – the kingfisher’s beak. One of the train’s engineers, an avid birdwatcher, saw a kingfisher dive into the water, creating a very small splash while doing so. It was able to do this because of its large head and narrow beak. Inspired by the aerodynamic shape of the bird’s beak, the engineers decided to apply it to the train’s design. The pointy front of the bullet train allows the train go extremely fast (300 km/h) with minimal air resistance, and thus creates no noise.

The pointy end of the bullet train is copied from the structure of the kingfisher bird’s beak (Photo Credit : HTU/gui jun peng/Shutterstock)

The sticky feet of geckos

There is a product design technique known as the biology-to-design approach. It starts by identifying a technological problem and then searching to see how nature has solved it. Once scientists figure out the secret to nature’s solution, they try to replicate it artificially. NASA’s space robots are a perfect example of this.


NASA developed robots that have a certain material on their little feet with teeny tiny hairs that help them stick to a surface. This material allows the robots to adhere to the spaceship while making repairs in outer space.

This invention came from observing the gravity-defying way that geckos walk on walls. Geckos tend to stick to the surfaces they walk on with the help of similar sticky toe pads. 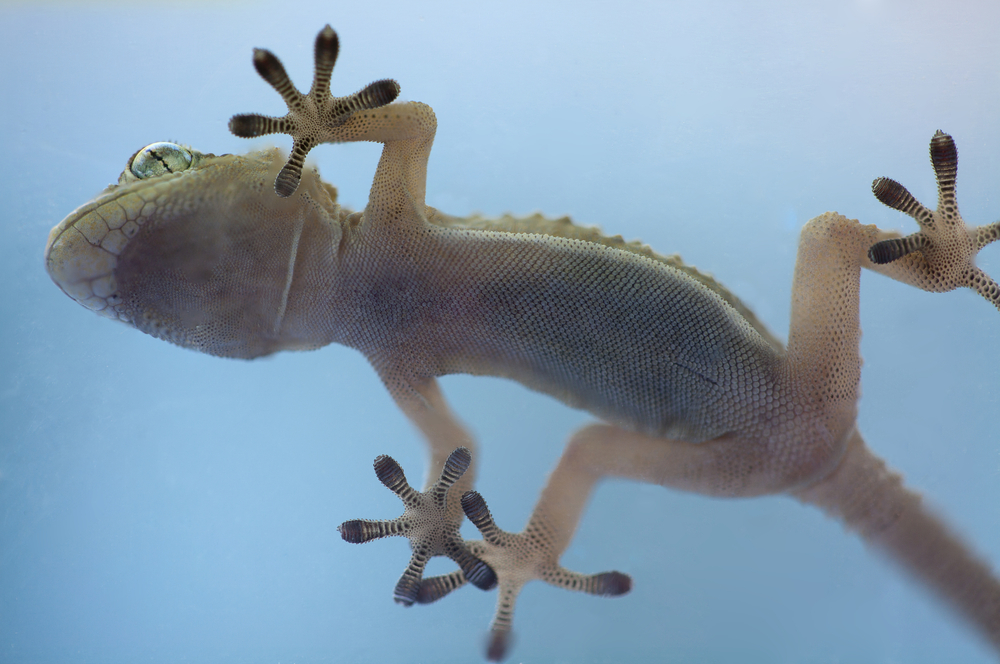 The adhesive limbs of a gecko allow it to smoothly walk up walls. (Photo Credit : Papa Bravo/Shutterstock)

The proboscis of mosquitoes inspired the design of needles

Mosquitoes are the absolute worst! These disease-causing bloodsuckers stick their proboscis smoothly into our skin to suck out our blood, often before we even realize it’s happening! A proboscis is a sharp needle-like appendage on the mosquito that is used to pierce the skin. We rarely feel a mosquito “bite” us, which is the nifty part. The proboscis has two jagged parts, known as maxillas, which make it easier for the mosquito to insert it inside a host’s skin.

One study demonstrated the use of a specially designed injection needle that was similar to a mosquito’s proboscis. The needle is a combination of a few microneedles that are jagged like the maxillas, which improve the ease of insertion. These less painful and less invasive needles can be used for drug delivery or in lancets used by diabetics on a regular basis.

Biomimicry is incredibly useful, as it allows us to learn from nature’s 3.8 billion years of experience in expert design solutions. Everything that nature designs provides maximum returns with minimal effort and resources.

However, it is important to understand that nature is patient and didn’t force these results. If mankind could find more ways to copy nature’s actions, we wouldn’t have resource crunches and pollution problems. For example, consider the amount of effort that goes into making artificial pollinators (robotic bees), yet they still aren’t as good as real bees!

According to biomimicry practitioner Denise DeLuca, people should look at nature as a source of inspiration, rather than a source of raw materials.


In my opinion, the biggest takeaway for product designers and engineers should be the way that nature designs eco-friendly sustainable solutions. Mother Nature may not be perfect, but she does come up with clever and beautiful ways for life to continue without exploitation, resource waste, or pollutant byproducts.