The presiding theory as to why flamingos stand on one leg is because that position allows their joints to lock in a stable position without any muscle exertion, giving them more balance than when standing on two legs. This physical adaptation is believed to be tied to its choice of habitat and social behaviors.

If you have ever driven past a salt pool near the coast in Africa, parts of Mexico, South America, the Middle East or India, there is a good chance that you spied a “pat” of flamingos strutting and bobbing and puttering around, their vibrant pink feathers standing out starkly against the landscape. At first glance, there are plenty of strange things that stand out with these birds—their unusually long legs, their vibrant color, and their manic behavior in groups, swinging their beaks back and forth as though gossiping with their neighbors.

However, it doesn’t take long before you notice the most peculiar part—many of them will be standing on one leg, sometimes for hours at a time… even when they sleep! As we have found so many times here on ScienceABC, almost everything in the natural world can be explained, or at least theorized over, so… why do flamingos stand on one leg? 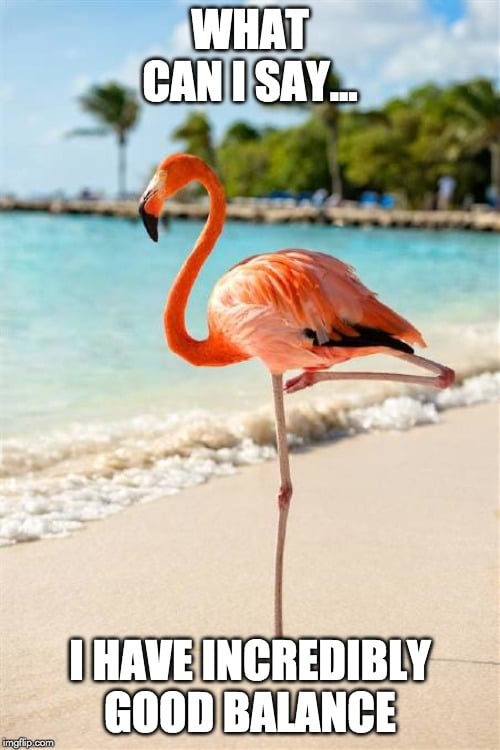 For anyone who is unfamiliar with flamingos, they are large birds who congregate in large flocks around the world, and are recognizable by their hooked bills, pink/salmon color, their unique habitat preferences, and their social nature. They spend much of their time standing in shallow sources of water, often highly acidic or caustic waters, such as salt pools, soda lakes and high-saline lagoons. While this might sound like torture for humans who moisturize and get scalded when their bath is too hot, flamingos can drink near-boiling freshwater from geysers and springs, and have very little competition from other species, nor many predators who would brave those waters. Furthermore, the tough, leathery skin on their legs protects them from damage in the toxin-rich waters.

Flamingos will dip their heads underwater and filter out small crustaceans and algae through their bills. There are six species of flamingos, and they tend to be varying shades of pink/salmon/red, due to the slight differences in their seafood diet. All flamingos enjoy shrimp, which is rich in carotenoid pigments, thus giving their feathers a pinkish hue, but shrimp is not always on the menu, and the flamingo’s adaptations allow it to eat well even in harsh conditions. 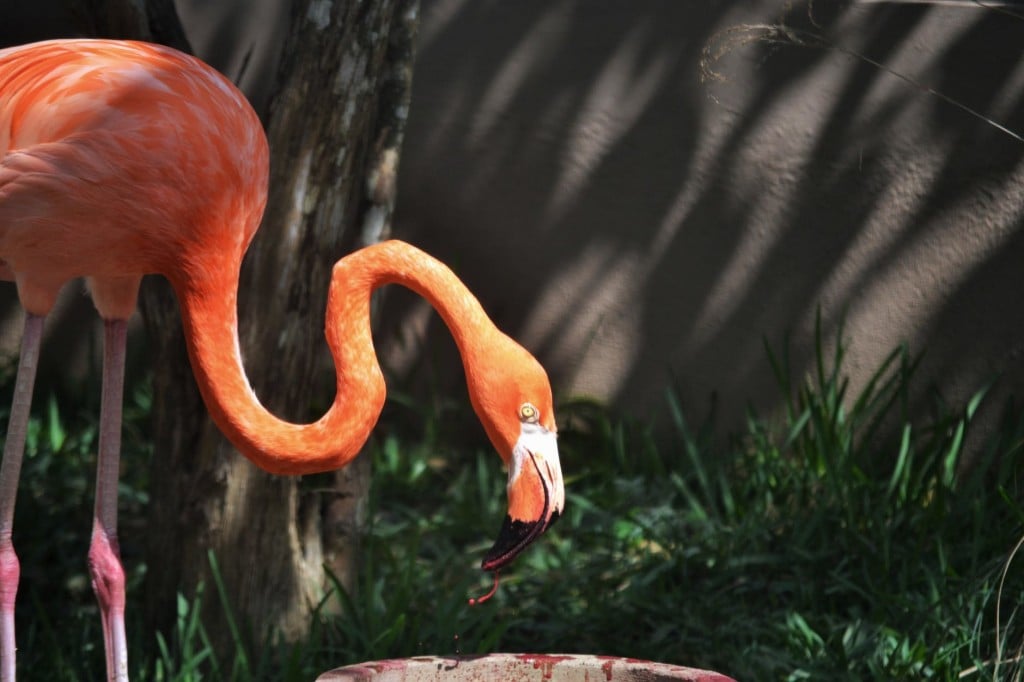 Whether flamingos are eating, breeding, socializing or sleeping, they tend to be found in the water, or in flight to their next communal gathering place. These unusual adaptations and behaviors, and their choice of habitat, are all clearly interconnected, making flamingos a strange avian type, but one that can be understood. The danger, of course, is that since flamingo’s have adapted so specifically to an extreme environment, adapting to anything new will take time, which they may not have. Increased mining activities, climate change effects and commercial fishing can threaten the feeding grounds and ecosystems that these birds depend on, so despite their numbers being in the millions, their highly specific breeding and feeding grounds put them at risk.

How And Why Do Flamingos Stand On One Leg?

Over the years, there have been many ideas proposed as to why they would choose to alternate legs so often, rather than standing firm like humans do. Some experts suggested that it was a way of resting the muscles in one leg at a time, or perhaps as a way of conserving heat by bringing the leg closer to the body.

Given all that we now know about the flamingo habitat and behavior, perhaps the answer of why they stand on one leg becomes easier to understand, but an anatomical breakthrough in the past decade also helps. Researchers from the Georgia Institute of Technology recently found that the structure of the bones and joints supporting a flamingo’s legs are slightly counterintuitive; they are less stable when both are in use. When a flamingo lifts one leg, its body weight is able to shift forward and balance perfectly on the locked leg beneath the body. The study found that it actually requires less effort to stand on one leg than it does to stand on two, making this the preferred position when a flamingo isn’t walking around, socializing or changing its feeding location. This is simply an easier stance for the flamingo to be stable, safe, and smart with its energy expenditure.

Like various other creatures, such as sharks, dolphins, other aquatic mammals and birds that migrate long distances, flamingos can allow half their brain to fall asleep—a phenomenon called unihemispheric slow-wave sleep. Therefore, a flamingo can actually sleep while standing on one leg, while the portion of the brain controlling the raised leg rests. When the bird wants to give the other half of its brain a break, it can simply switch legs and settle comfortably back on its low-effort stand! 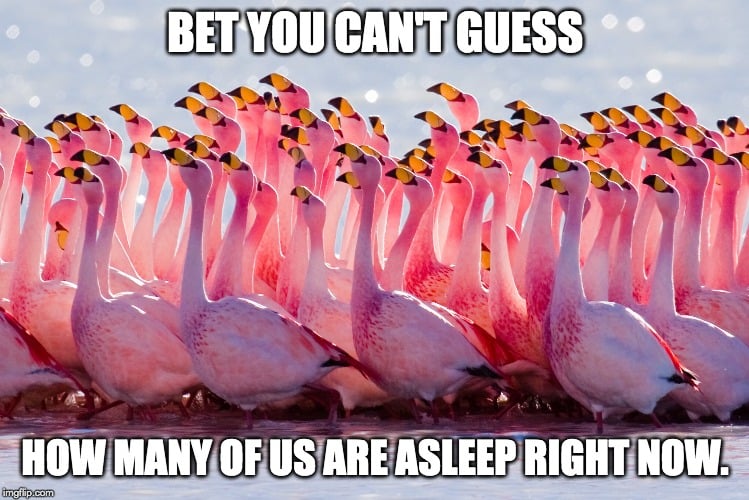 Also Read: Why Are Flamingos Pink?

Now, there is also the question of why flamingos developed this ability, given that they are generally non-migratory birds. There are a few proposed reasons for this; being able to sleep while standing up amidst your flock is much safer than finding a place on land to settle down, where a predator could make an easy meal of the bright-pink bird. Additionally, given the toxicity and high salinity of the waters in which they stand, predators are less likely to take a dip for a meal. It is also important to note that while a flamingo’s legs are covered in protective scales, that isn’t true of its whole body. The surrounding land of salt pools and salt marshes may also have quite acidic sand or soil, which may be unpleasant to sit or sleep on. Their tough leg skin and well-balanced sleeping style allowed them to use their unique environment to their advantage.

As with so many interesting adaptations, this brings up a question of “what came the first, the chicken or the egg?” Did flamingos develop scaly legs so they could survive in acidic environments away from competition, and did they develop the habit of standing on one leg because they had unihemispheric sleep patterns, or because their bones evolved in a way that made it more efficient to stand on one leg than two? Whatever the answers to these questions, and whatever evolutionary order their adaptations came in, flamingos remain some of the most fascinating and eye-catching creatures in the world!