A few years ago, I was taking a walk along the beach near my home. Exams were just around the corner, and after locking myself inside my room for days, I had stepped out for some much-needed fresh air. As I walked, I noticed that various types of fish had washed up on the shore. They were of all shapes and sizes—small, long, thin, and fat. Some were already half-eaten, while others lay on the sand, fully intact.

I was so engrossed in the fish that I had walked all the way to the neighboring fishermen’s village, and had seen dozens of fish strewn along the shoreline. As I was turning back to head home, something caught my eye. At first, it looked like a white balloon that someone had inflated and left in the sand, but as I moved closer, I saw that it was actually a fish!

The fish had tiny lips, but looked like it had filled its face and entire body with air! It was the size of my palm and had a smooth, white belly. It didn’t have normal scales like most of the other fish I had seen. Instead, it had prickly structures all over its body. Fascinated, I rushed home to do some research, which is when I learned for the very first time about the pufferfish.

How to live without a heart or a brain - Lessons from a Jellyfish
If you wish to buy/license this video, please write to us at admin@scienceabc.com.
﻿

What Is A Pufferfish?

Pufferfish are fish that belong to the Tetraodontidae family, a group that comprises over 200 different species of pufferfish. These fish typically have four large teeth fused to their mouth, which allows them to crush their prey, and also enables them to eat a wide variety of prey. Interestingly, this is how their scientific name, Tetraodontidae, came about. 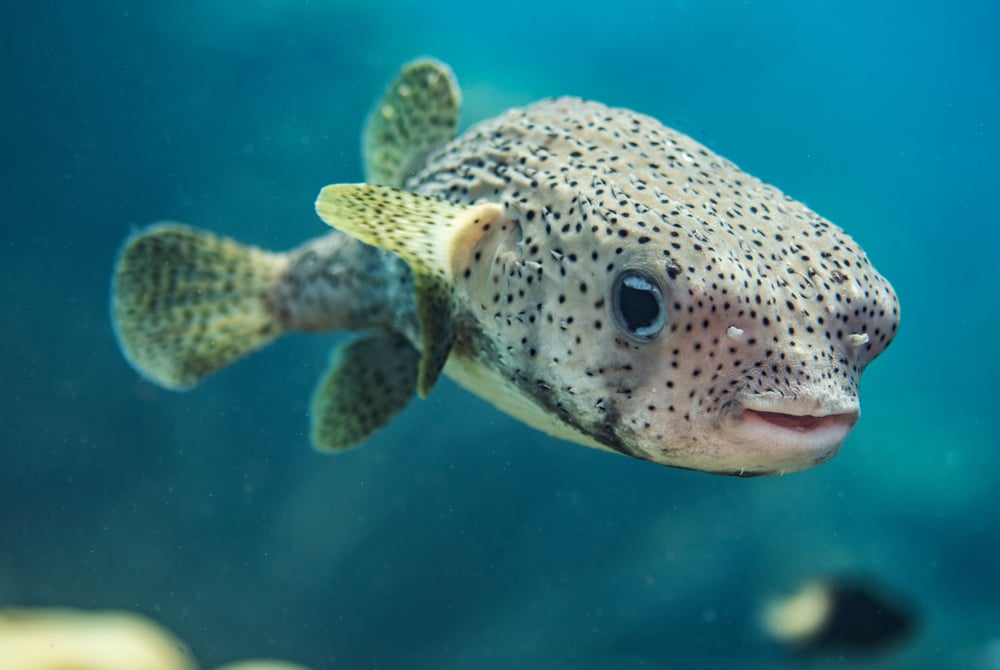 They may look cute, but trust me, you do not want to touch one! (Photo Credit : J.T. Lewis/Shutterstock)

One usually finds these species in marine habitats, especially in tropical and temperate oceans (e.g., the Indian, Pacific, and Atlantic). However, they can also be observed in freshwater or brackish habitats. These types of fish are small, but can grow up to 3 feet in size. They usually operate alone or in small groups, and prey on algae and small invertebrates, including clams, shellfish and mussels.

When you look at any pufferfish species, you will immediately notice that they don’t have the typical scales most fish possess. Instead, you will find that they have tough and prickly skin. They also have thin spines that remain hidden until the fish puffs up, which comes in handy if they’re caught by predators.

What Superpowers Do Pufferfish Have? 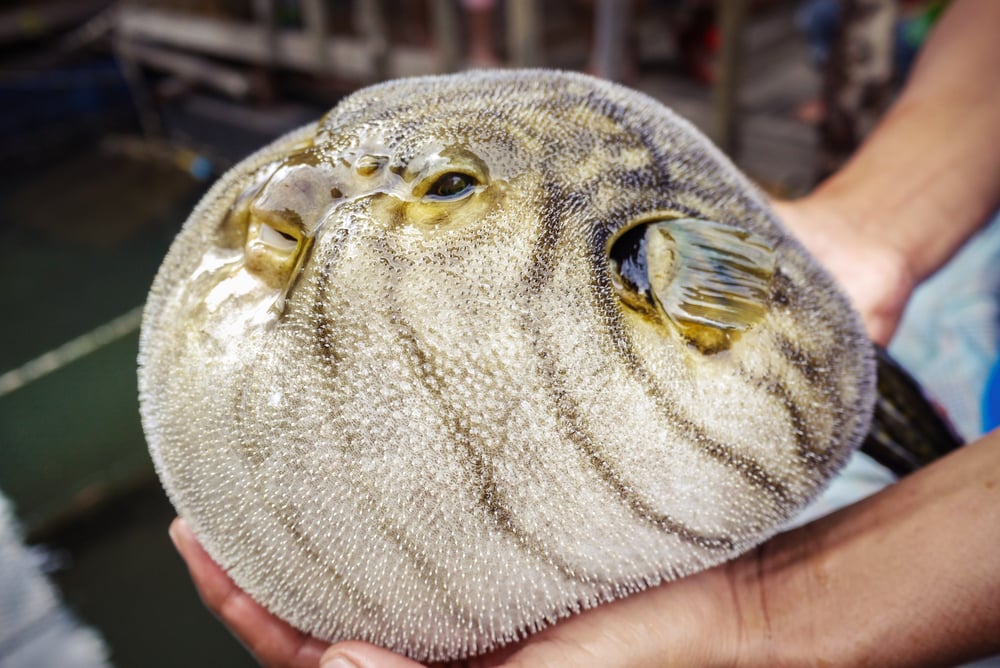 All pufferfish species have an innate ability to inflate themselves like balloons when threatened, disturbed, or to avoid predators. Because they cannot outrun most predators, they inflate themselves to make it harder for the predator to attach or swallow them. When a pufferfish feels threatened or encounters a predator, it fills its elastic stomach with large quantities of water or air until it has fully inflated like a balloon. Obviously, this is how these fish get their name—because of their ability to “puff” up! 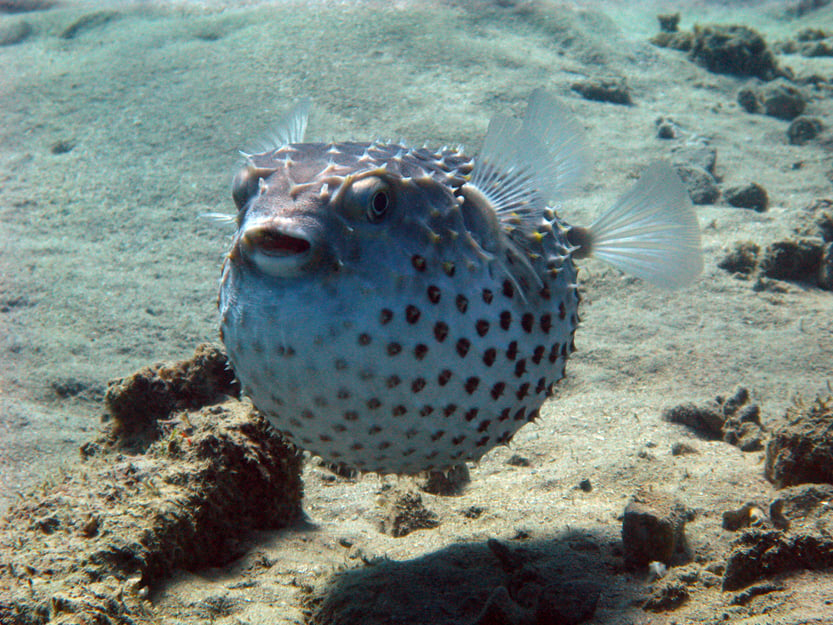 One can see the spikes on a pufferfish when it is fully inflated. (Photo Credit : Jan Finsterbusch/Shutterstock)

Even if a predator catches them before they inflate, pufferfish can still pack a punch by choking the predator, or worse, by poisoning it. Pufferfish are highly toxic, which is their second natural defense. Most species of pufferfish contain a toxic substance known as tetrodotoxin, which is lethal to predators. This substance is not produced by the fish on its own, but is instead synthesized by bacteria such as Pseudomonas and Actinomyces, which are found in pufferfish habitats.

Now here is something that will blow your mind. Despite their toxicity, dolphins intentionally nibble on pufferfish to get high! Yes, you read that right! Recently, when a group of naturalists were filming dolphin pods, they noticed peculiar behavior among the youngsters. The young dolphins would carefully tear into pufferfish to make it release its toxin. They would then pass on the meat to other members of the pod after chewing it gently. The dolphins had figured out a way to make the fish release a small amount of toxin, just enough to put the dolphins in a trance-like and “altered” state, yet not kill them!

Pufferfish As Food And Toxicity In Humans

If you thought pufferfish were only poisonous to other fish, you thought wrong. Pufferfish are considered delicacies in some parts of the world, but they are extremely poisonous to humans unless cleaned properly by a professional.  Pufferfish poisoning occurs after humans ingest parts of the fish that contain tetrodotoxin. This toxin is primarily found in the ovaries and testes, liver, intestines, and skin. If proper care is not taken while cleaning the fish, the toxin can also spread to the flesh.

Tetrodotoxin is a neurotoxin, and far deadlier than cyanide. The toxin blocks the sodium channels in the neurons, which restricts the proper functioning of nerves in the body. When the nerves are damaged, the muscles lose their ability to control muscle movement, triggering suffocation and even heart failure. Unfortunately, there is no antidote for pufferfish poisoning. The only treatment is to wait until the body excretes the toxin naturally from its system.

In the past, there have been many cases reported of pufferfish poisoning among humans. In fact, the earliest record is that of Captain Cook! It is said that Captain Cook and his crew fell ill after consuming the liver of a pufferfish while sailing across the Pacific Ocean in 1774. 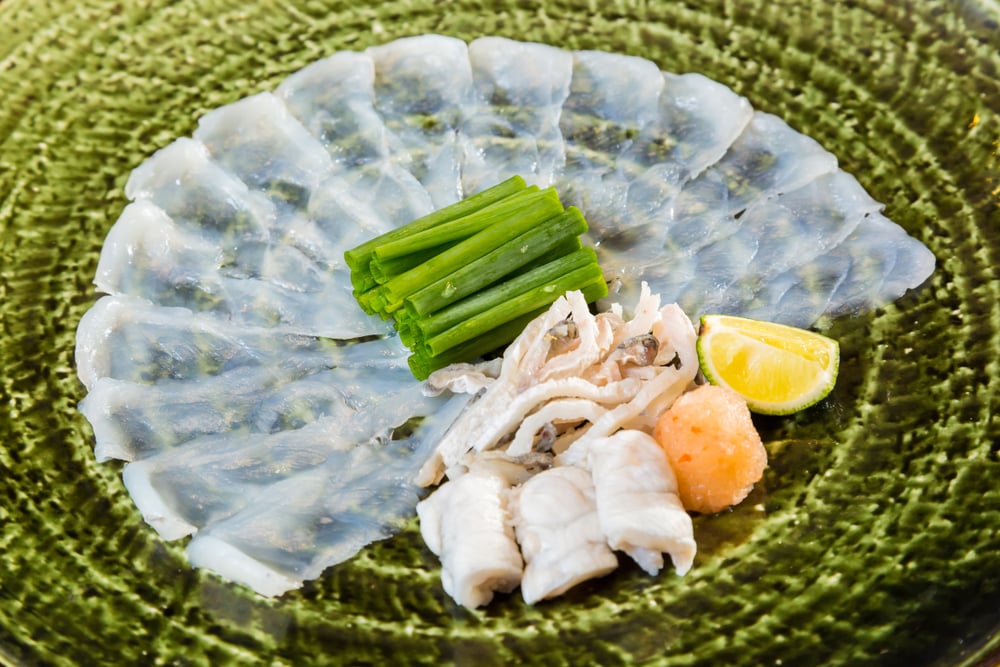 Today, most cases are reported in Japan, where pufferfish are considered a delicacy. Pufferfish are commonly known as “Fugu” in the region, and their meat is filleted and served in a variety of dishes. In the past, thousands of Japanese citizens lost their lives after ingesting fugu meat. Between 1886 and 1963, 6386 cases of fugu poisoning were registered in the region, of which 59% resulted in death. However, with increased awareness and stricter regulations, Japan has decimated the number of deaths. Today, fugu is only prepared by highly trained and licensed chefs who know that a single wrong cut could lead to the death of their customer.

What Are Some Common Pufferfish Species?

The Sharp-nose puffer is a small fish with a pointed snout and a protruding set of lower and upper teeth. It is dark brown and has distinct blue-green fluorescent markings around the eyes. The sharp-nose puffer is one of the smaller known pufferfish species and is found in the warm and clear waters of the Caribbean. It is also found in coral reef habitats, and is a very popular ornamental species. A pufferfish puffs up while being attacked by another conspecific. (Photo Credit : valda butterworth/Shutterstock) Pufferfish come in all shapes and sizes. (Photo Credit : slowmotiongli/Shutterstock)

The green-spotted pufferfish is a small fish with a pear-shaped body covered in minute spines. It is mainly found in Asian countries, such as India, Bangladesh and Myanmar. This pufferfish is carnivorous, and its sharp beak allows it to easily feed on crustaceans and shellfish. It is very peaceful, but becomes more aggressive as it grows older. 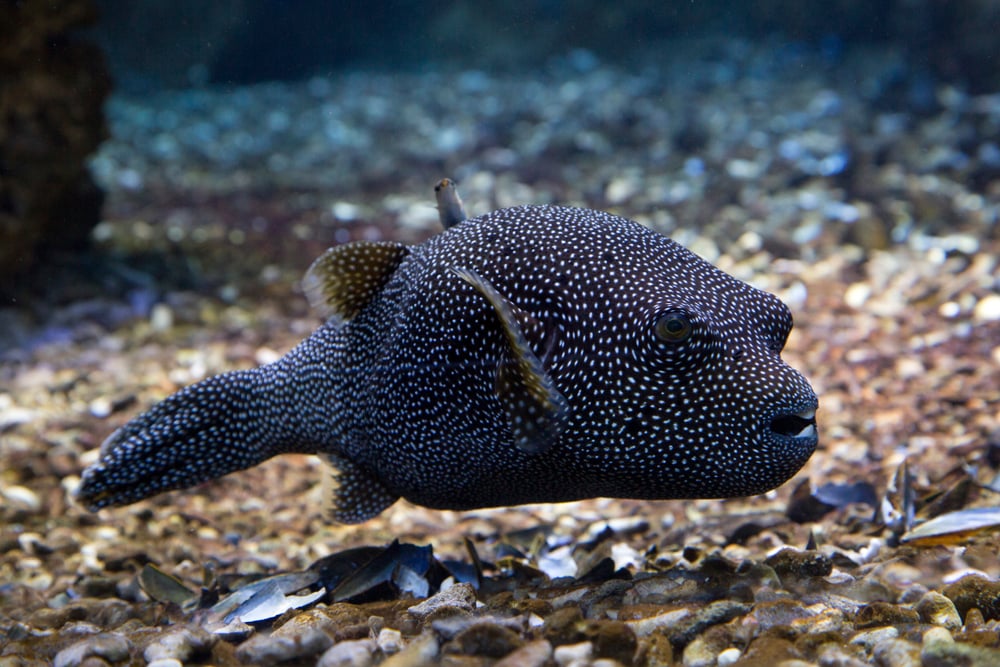 They may look very elegant now, but wait until a predator threatens them! (Photo Credit : Podolnaya Elena/Shutterstock)

The Guinea-fowl puffer is larger than the sharp-nose and green-spotted pufferfishes. This variety is found in tropical waters, such as the Indian and Pacific oceans, as well as coral reef habitats. This pufferfish is polka-dotted—black with small white spots—along with beak-like teeth and powerful jaws. It gets its name because of its resemblance to guinea fowl birds. This species forages on invertebrates and prefers feeding on sponges and soft corals. Like most pufferfish, it is a clumsy and slow swimmer that can easily be caught by predators. It is sought after and displayed in many aquariums across the world as an ornamental fish.

To conclude, the next time you’re walking on the beach, keep your curiosity in check and refrain from touching anything that looks like a balloon… it may just be a pufferfish! 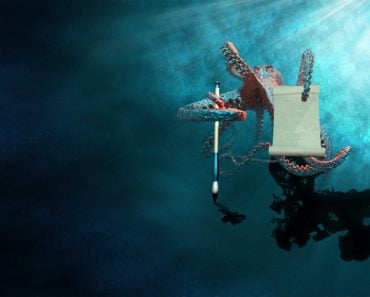