Mouthbrooding is a parental strategy that involves some species of fishes keeping their eggs or newly hatched fry (a stage where they can feed themselves), in their mouths. Mouthbrooding has been observed in more than 53 genera of fishes.

There is a popular notion that life will do anything to survive and reproduce. Mammals like us actively protect their offspring in animal communities; birds lay their eggs and sit on them until they hatch, whereas some reptiles abandon their abundant young to fend for themselves. Fish also care about their kids, so much so that some go way beyond coddling and caressing.

There’s one group of fish that excels in the art of child care—the mouthbrooders. They starve for weeks, conceal their appearance in various ways, and the males even shoot their sperm right into the mouths of their mates. All this and more, just so their young can have the best chance at survival.

If only there was a Parents of the Year award in the fish world! 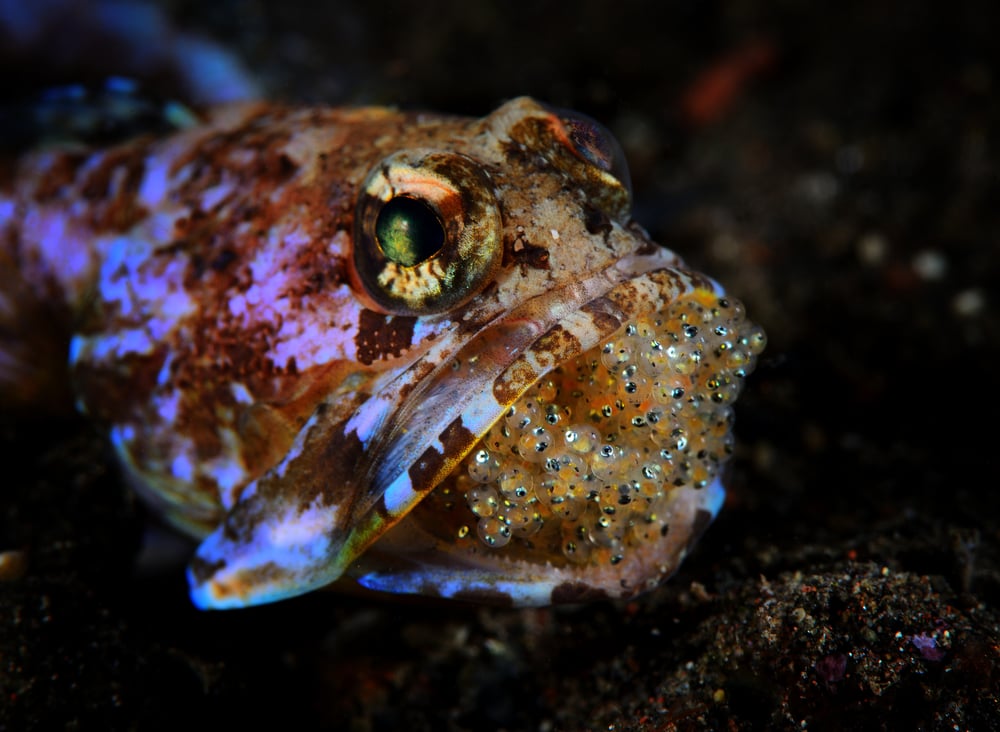 The male jawfish holds the fertilized eggs in his mouth for the entire period of their maturation (Photo Credit : Shpatak/Shutterstock)

Mouthbrooding is a parental strategy that involves some species of fish keeping their eggs or newly hatched fry (a stage where they can feed themselves), in—you guessed it—their mouths. This isn’t some anomaly in a single species of fish either. Mouthbrooding has been observed in more than 53 genera of fishes. Each species follows a type, and depending on if it’s the father, mother or both who nurture the eggs in their mouth, it is referred to as paternal, maternal or biparental mouthbrooding.

The Not-so-easy Life Of A Mouthbrooder

Can you imagine eating with your mouth full? Neither can mouthbrooders. Whilst they wait for their eggs to incubate (nurture and develop), the mouthbrooding fish cut off their ties with food, as there’s hardly any space in the mouth cavity to grab a bite. This fast can last for as long as two weeks, depending on the species.

Studies have shown that this deprivation of food can lead to some physiological changes in the bodies of mouthbrooders, including a decrease in the size of their ovaries, and lower levels of reproductive hormones like androgen and oestrogen.

There’s both saltwater and freshwater fish that follow this unusual method of overprotective care, including pikeheads, cichlids, jewfishes, catfish, cardinalfish and gouramis. 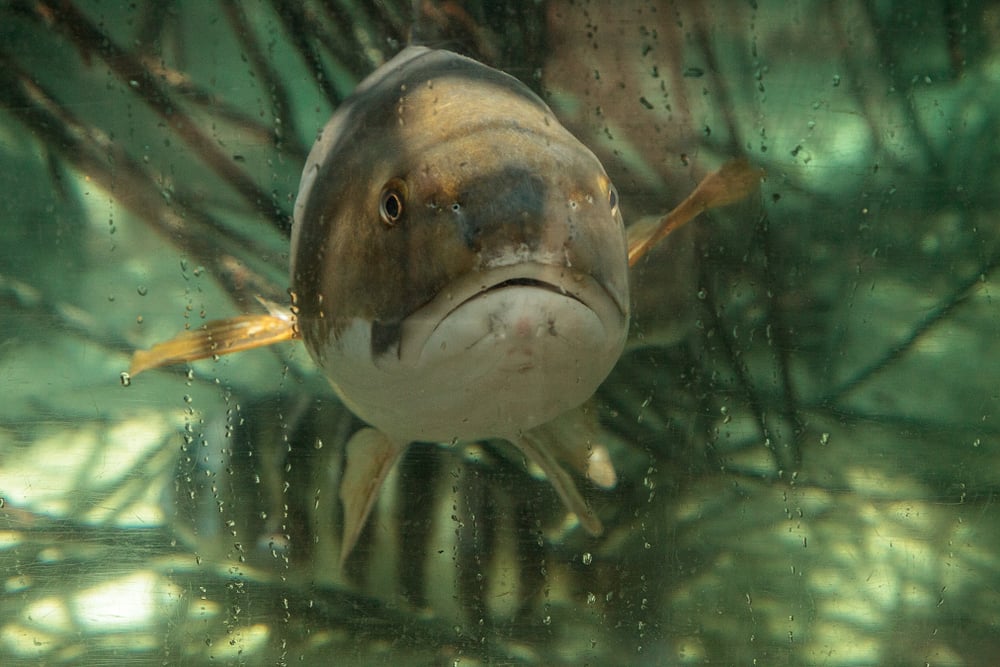 The males of this species keep the fertilized eggs in their mouths for an astounding 80 days! The ordeal does not end there, for the juvenile fry don’t leave the safe haven—their father’s mouth—for a couple more weeks.

The ‘jawfish’ stands true to its name, with its large prominent jaws. 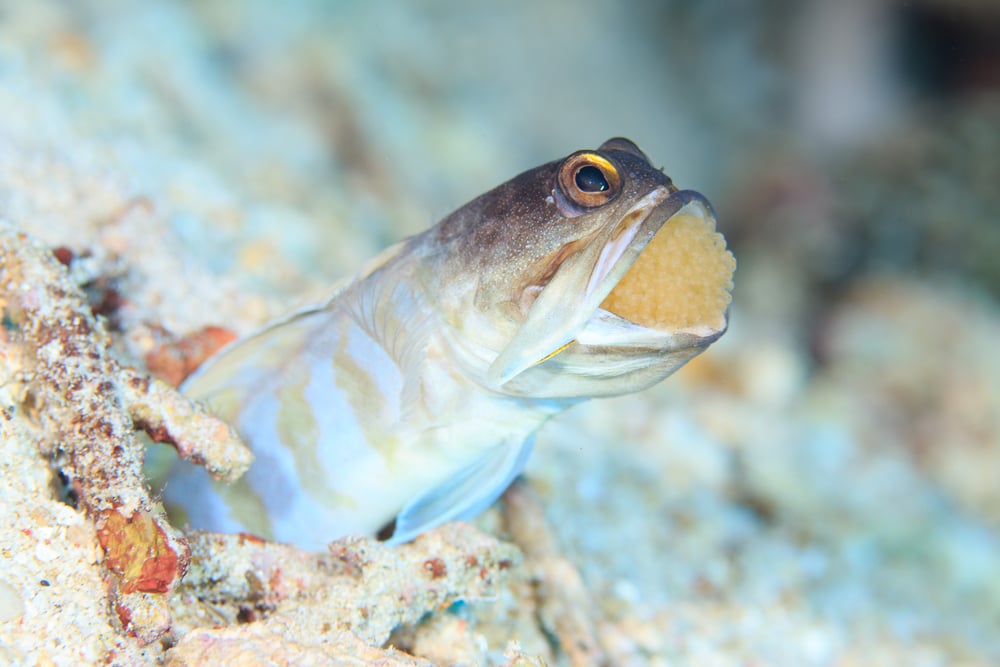 The male jawfish will spread his fins and arch his back in an attempt to attract a female jawfish, directing her to his burrow, where she lays her eggs. Seizing the opportunity, the male will then fertilize the eggs and scoop the lot in his mouth.

However, unlike the other paternal mouthbrooders, the yellowhead is keen on taking lunch breaks. He “spits” these eggs in his burrow temporarily and comes back with a full belly.

He also opens his mouth and rotates his eggs with the intention of giving the eggs a wash and fairly distributed access to oxygen.

Pikeheads are micro-predators that resemble little floating twigs on the water’s surface. That said, their tiny size is not to be mistaken for harmlessness, as they often make vicious attacks on their prey by engulfing them. 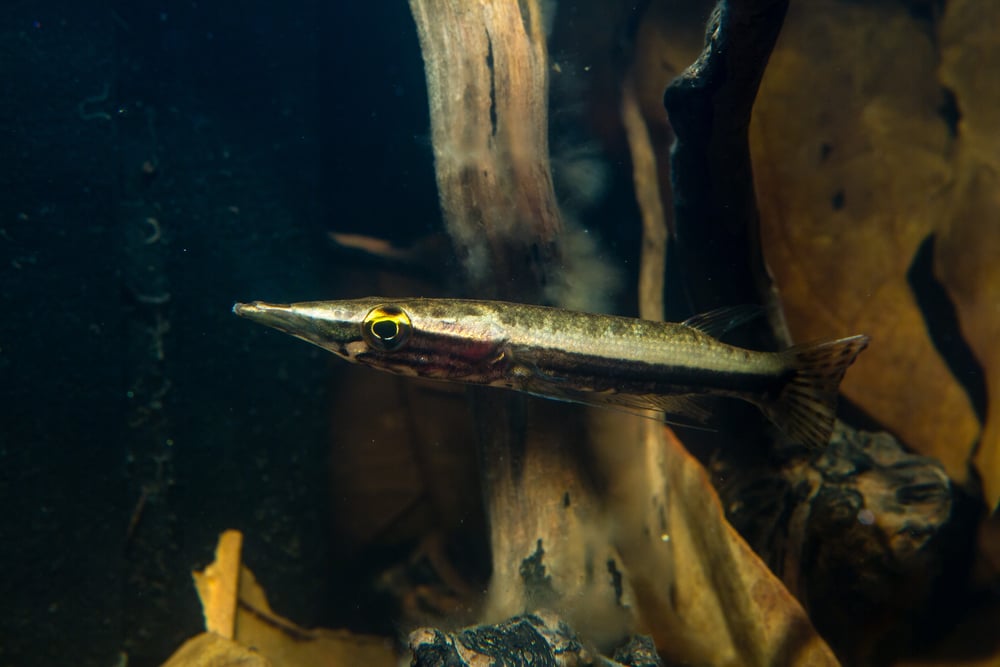 When a pair of pikeheads are ready to spawn, the female does her little dance number with flaring gills. If impressed, the colors of the male become intensified along its throat and flanks. The pair then select a site to spawn. The female releases her white eggs and the male instantly fertilizes them. Then, as you’d expect a mouthbrooder to do, the male picks up the eggs and puts them in his mouth. Meanwhile, the female watches on. Incubation lasts for about 30 days, and the male abstains from food during this period.

The female is the mouthbrooder in this case.

A female cichlid lays her eggs on a rock or a secluded little niche, but unlike male mouthbrooders, the female tends to scoop up her unfertilized eggs. Once she finds a suitable mate, the female will then open her mouth and allow the male to spray his sperm in her mouth cavity. The sperm will then fertilize her eggs while they’re in her mouth. This marks the end of their courtship, while ensuring that the eggs face no vulnerability with respect to their susceptibility to open-ocean predators.

The males can also get creative if their particular species of Cichlid is sexually dimorphic (the male and female can be easily distinguished). 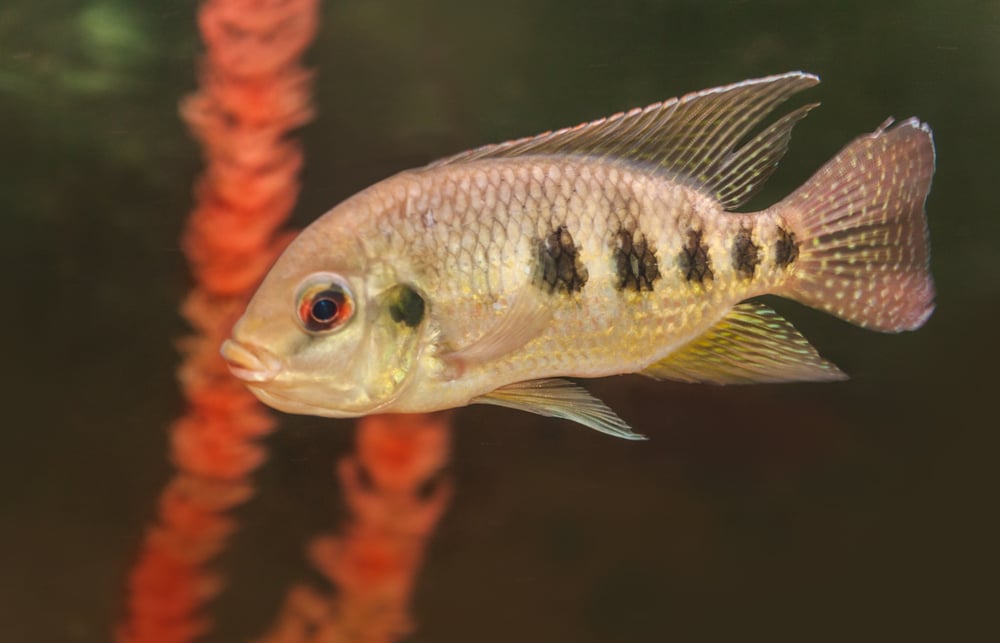 The young fry, once hatched, will consume their own yolk for three weeks. They will then remain in their mother’s mouth for an additional few days, feeding on whatever she feeds on.

The Cons Of Orally Brooding Young

With a mouthful of eggs, some offspring are bound to be swallowed. In fact, if the female is holding eggs that don’t get fertilized, she swallows them on purpose. Some Cardinalfish turn into cannibals, even feeding on some of their fertilized young. Whether they have a little oopsie, or get desperately hungry, is still a mystery.

Mouthbrooding is a high-risk, high-reward situation, much like putting all your proverbial eggs in one basket. If the parent is attacked, all of its young also get killed.

Brood parasitism is another concern for mouthbrooders, much like birds that drop their eggs in another bird’s nest, leaving it to protect their young, while freeing themselves from parenthood using egg mimicry. 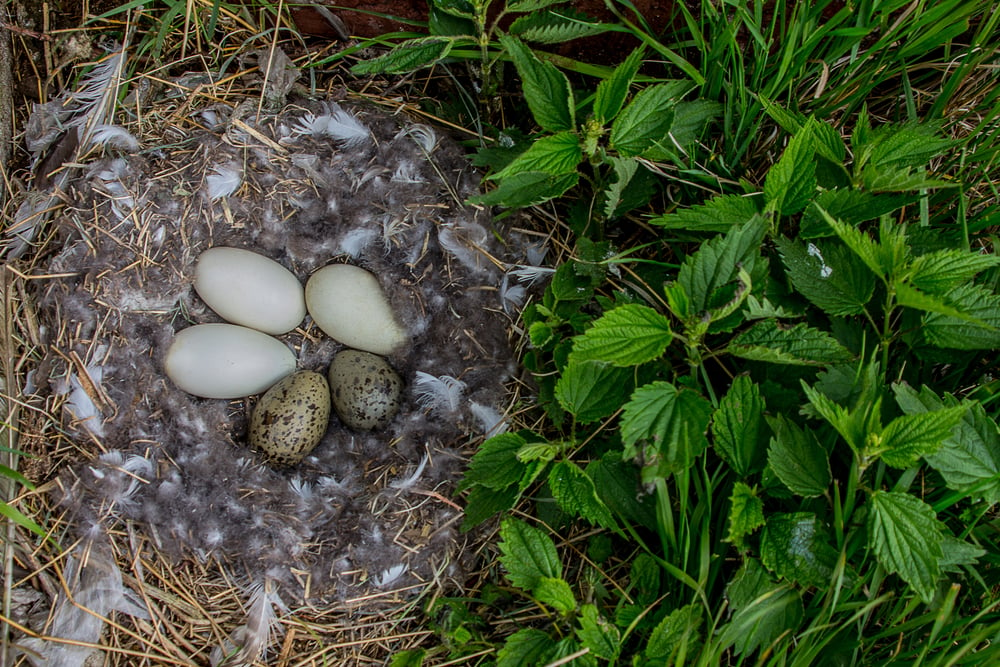 A parasite fish, like a cuckoo catfish, uses the same technique. It sneaks its own eggs into the clutch of a brooder’s eggs, and takes away the brooder’s own eggs to feast on. Mistaking these eggs as its own, the brooder will tend to the catfish’s young. It’s both trick and treat for the catfish!

Fish may have resorted to this method due to fear of predation, lack of nest sites or habitat invasion. Like the Mandarinfish, many species lay their batch of eggs (usually hundreds at a time) in vulnerable spots, susceptible to many predators that can sniff out these hiding places. Mouthbrooders would rather not gamble with the lives of their offspring.

Another reason for mouthbrooding includes sexual selection. This means that some traits of an individual give it better odds at finding its mate. You may compare this trait of mouthbrooders to the attractive and melodious-sounding males of the avian world, which give them a better chance at grabbing the attention of a female.

Mouthbrooding is a weird, albeit impressive way that some fish use to coddle their young. They incubate the fertilized eggs in their mouth until a healthy fry is hatched. Carrying all that precious cargo, mouthbrooders literally bear the full weight of their family.

So, if you ever go scuba diving and want to observe these odd mouthbrooding fishes, look for mumpy-mouths or swollen cheeks, as those should be a dead giveaways of that parents’ breathtaking responsibility!