“Human beings are the most intelligent creatures in the world.”

This is a sentiment that we’ve certainly all heard in the past, but is it actually true?

While I like to believe that, every now and then I find reasons that make a pretty strong argument against that assumption. In general, humans are considered to be the smartest living things, (as far as we know), but there are also some animals that are much smarter than you ever imagined. They may even give the less intelligent members of the human race a run for their money!

Furthermore, these are not creatures from some far-off land; these are animals that you would recognize immediately!

No surprises here, given that apes are so closely related to human beings.

Apes are the single-most intelligent species known to us. In the 1960s, while studying primates in Tanzania, the revered primatologist Jane Goodall, discovered apes using twigs to catch ants. This tool use led to a flurry to study the primate brains. Chimpanzees, in particular, have been subject to a great deal of medical and psychological research over the years. Besides using tools, scientists have found that apes can solve complex problems, display amazing decision-making powers, and employ all sorts of techniques to find and store food in the wild. In the 1950s, a British television show had a star chimp, Congo would be featured doing artwork. Congo’s artwork was bought by the art superstars likes of Picasso and Miro.

Samuel Pepys noted when he first met a chimp,“I do believe that it already understands much English,” he continued, “and I am of the mind it might be taught to speak or make signs.” Not only can chimps be taught to communicate to an extent in our human language, but researchers have also found that apes naturally have their own form of complex and sophisticated sign language to communicate amongst themselves.

Tool-use, language and art are big signifiers of intelligence. But the story doesn’t stop there. The plethora of primate research has found that chimps have excellent memory. They can recall tasks shown to them 24 hours prior and some have photographic memory. Further, female chimpanzees have been found to map out different routes in order to pick the best one to travel by. If the Earth was ever going to be taken over by animals (as imagined in the movie Rise of the Planet of the Apes), then there is no doubt that apes would be the leaders of that revolution.

Rats are naturally intelligent creatures that have managed to survive and thrive in a human population that despises them for centuries. To us they might be rogue rodents that are dirty beasts scuttling around alleys and gutters but they are smart. You know this if you’ve ever set up rat traps and failed. Do I know you from somewhere?

Rodents are smart animals. Though their brains aren’t as complex as the primate brain(us, humans, included), there are some similarities that make rodents a perfect model for research. An average rat brain weighs around 2 grams, which is quite high in terms of the brain size/body mass ratio.

They also have unusually strong cognitive abilities; they can navigate to areas where food is stored simply through their sense of smell and direction. With proper training, rats can even perform certain tasks and tricks, and especially enjoy a good game of hide and seek.

Although a rat’s vision is relatively poor, this is compensated for by their extraordinary memory. Rats are very social too; they easily socialize with fellow rats – but not so much with humans.
Their ability to solve problems and tasks given to them makes them a psychologist’s best friend. In Africa, the rat’s sense of smell and direction have been put to use by training them to detect land mines and explosives. Go figure!

This omnipresent bird may seem sinister to some, but they happen to have exceptional minds. You might think that they’re bird-brained, but they are actually far from that.

Crows and the family of Corvids which include ravens, magpies, jackdaws and rooks are some of the smartest animals. Crows especially, being so close to human life, have shown an incredible capacity to adapt, sometimes in ingenious ways.

Crows have been found to place nuts on the road so their tough shells can be broken open by passing vehicles. This BBC video shows how well crows can learn and integrate new information to solve problems. A recent paper found that New Caledonian crows use a very specific plant twig to make hooked tools.

Crows have been found to remember faces and hold grudges against the people they don’t like. In a study published in 2011, researchers noticed that not only do crows remember faces, they let other crows know about a “dangerous” human, as the paper’s title puts it.

What’s more interesting is that crows even know to wait for the red light of traffic signals to retrieve the nuts! (Source) In some ways, crows observe traffic laws better than us! Crows, like rats, also have a very good memory. They have been found to remember human faces and even hold grudges against certain humans who have treated them poorly in the past.

It’s difficult not to be endlessly impressed by these gentle giants, even more so because of their undeniably brilliant brains! Having a phenomenal memory is one of the most well-known characteristics of elephants. It is often said that these long-trunked pachyderms never forget anything! While there may be some truth in that, a long-term memory is not the only thing that makes them so smart. Elephants are highly social animals that carefully coordinate amongst themselves to navigate in forests. Recent studies on elephants have shown that they can also differentiate between several human languages. They can guess a person’s gender and age, as well as ascertain whether they are a threat, simply by listening to their voice! Elephants raised or kept in captivity have shown an inclination for certain art forms, such as painting. They can easily differentiate between colors and seem to have a moderate understanding of shape and aesthetics. They also display inclinations to certain kinds of music. If you had to guess, what genre of music do you think an elephant might like?

No discussion about the intelligence of animals would be complete without mentioning dolphins!

Dolphins are odontocete cetaceans part of the Delphinidae family. These small toothed whales are the smartest animals in the sea. Their encephalization quotient which is the ratio of the observed brain mass to the predicted brain mass is second only to humans. What this simply means is that dolphins have a big brain. 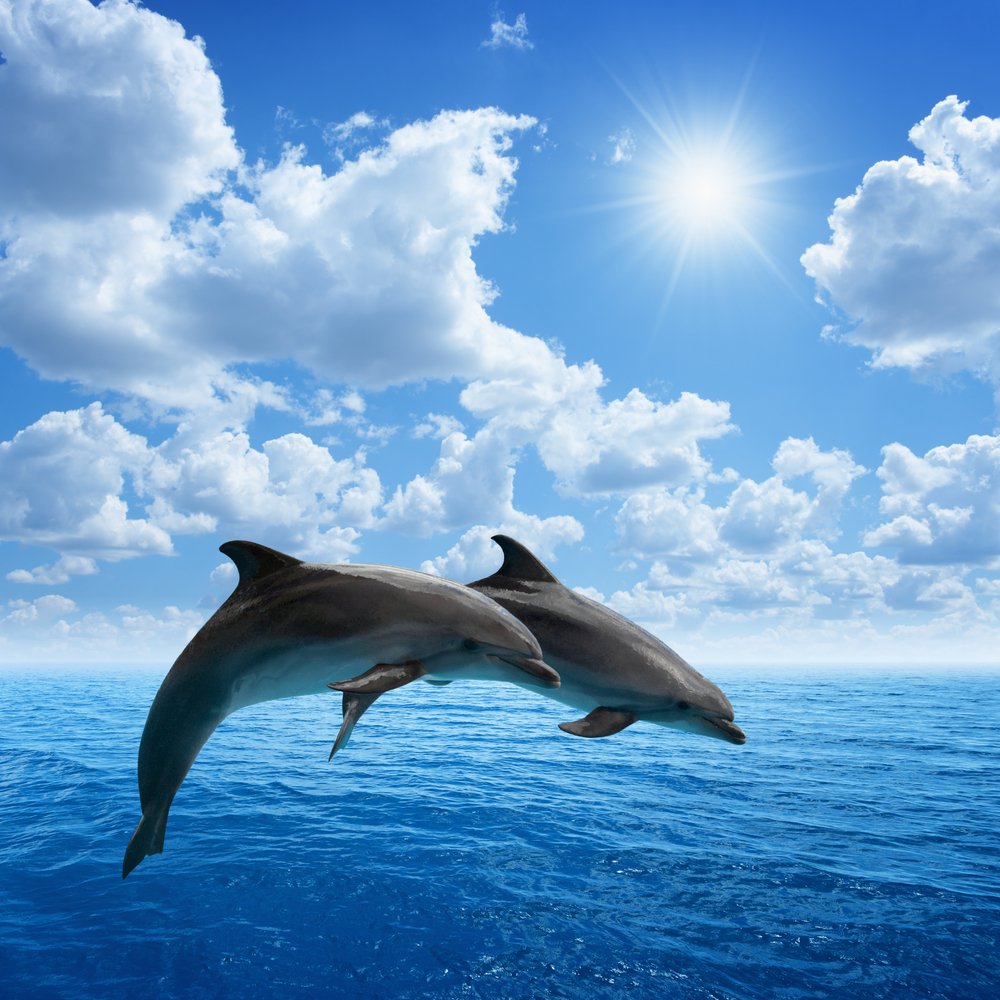 Dolphins use this big brain in an interesting way. For one, they are surprisingly human-like and active when it comes to enjoying life. They have been found to take part in games (like playing catch) underwater with other dolphins and fish as a form of entertainment. Here is a video of dolphins playing catch using a puffer fish.

They are also very creative thinkers, which is shown by the many creative ways they have of hunting for and catching food at sea. They form complex hunting routines that require intellectual sophistication to plan and execute. Some of their hunting routines might put human executives in corporate companies to shame.

Dolphins, like humans, are also able to learn from their past experiences. They use a sophisticated language to communicate amongst themselves and are highly coordinated in social settings. They have also been seen to imitate each other in order to entertain, commonly entertaining human observers by performing wonderful jumps in the air. Of all the animals in the wild, it seems like dolphins know how to really have fun!

Squirrels are great planners, which is a particularly human trait. However, to survive long winters, squirrels plan ahead and stash their food in places where it can be retrieved without much difficulty, but that are also out of sight. Squirrels are quite cunning, as well, and are remarkably good at hiding if they sense that they’re being watched by predators. They’re pretty damn good at protecting themselves too. Squirrels in California have even been found to cover themselves with the smell of rattlesnakes to keep potential predators at bay.

One final thing that squirrels also have that trumps human abilities is their agility. Their ability to scurry up trees and around predators and obstacles is something that would definitely come in handy for us!

When humans study intelligence, we often look at it through our lens. We consider the ability to practice art, use tools, and understand human language are things smart beings can do. But individual species of animals are uniquely suited to their environment and their surroundings. These animals might be very smart as per human standards, but there is, I believe, a whole world of animal cognition that we have yet to unravel. The crows being intelligent in spite of not having a neocortex, or the squirrels being able to remember the exact location of their dispersed food is evidence that there might be more to how we qualify and quantify smarts.

Maybe if we open that Pandora’s box we might realize that Homo Sapiens aren’t all that smart as we think we are.