The process of applying complex designs to objects by immersing them in an aqueous medium containing printed graphics is known as immersion printing.

As an ardent automobile enthusiast, I am always looking for upgrades for my car. Being fond of luxury cars, it was only natural for me to look for parts that had a wooden finish. However, wooden finished parts do not come cheap, and my budget could only be stretched so much before it became impossible for me to afford. 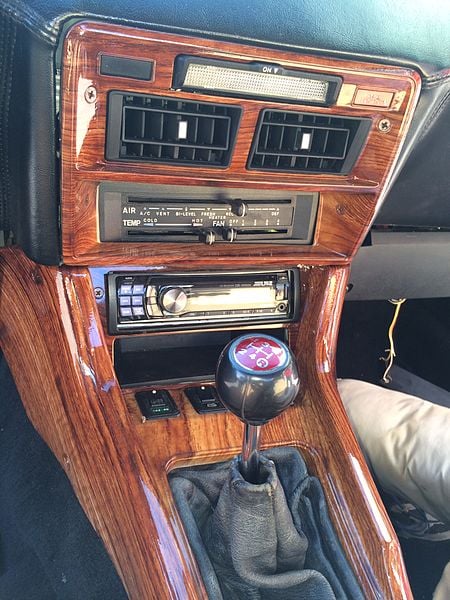 Upon heeding the advice of a friend, I decided to give immersion printing a try and—to my great pleasure—I was able to replicate the desired finish without paying a significant premium. So what exactly is immersion printing? Let’s find out.

How Many Times Can You Fold a Piece of Paper In Half?

What is immersion printing?

The process of applying complex designs on objects by immersing them in an aqueous medium containing the printed graphic is known as immersion printing.

The process involves adhering a film of ink floating in water to the desired surface, also referred to as substrate, by dipping it in water. This process is known by many names, such as water transfer printing, hydrographics and water marbling.

How is immersion printing done? 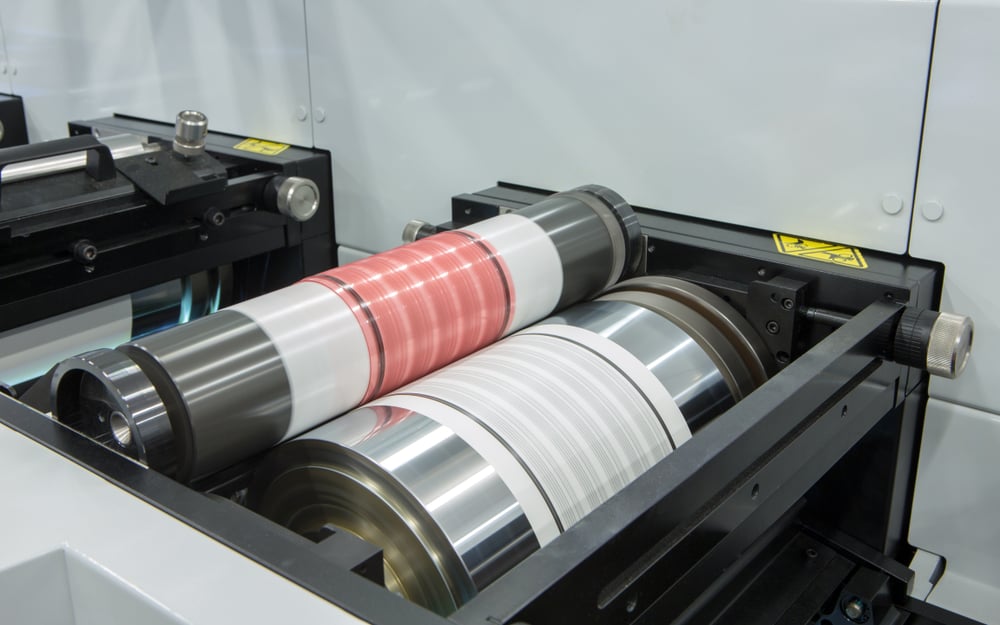 The film is printed on a special polyvinyl alcohol compound using rotary printers. The ink itself contains solvents like glycol, acrylic pigments, resins and bonding agents. The ink is designed to adhere to primer or other proprietary adhesion promoting coatings. 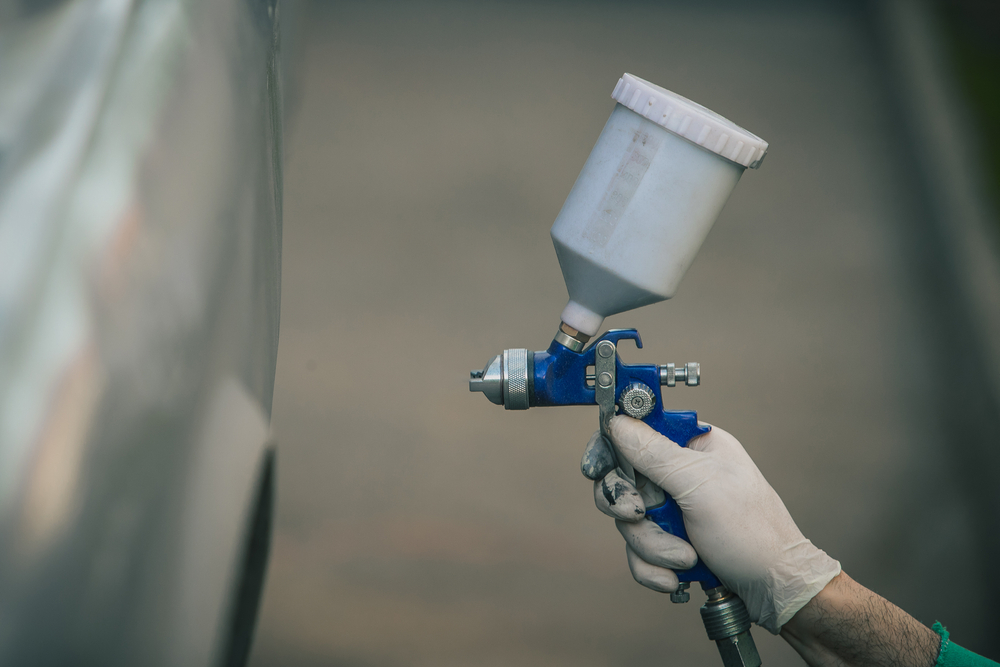 As is the case with any painting process, the substrate is first sanded down to a smooth surface finish with micro-abrasions. After thorough cleaning and de-greasing, it is coated with a primer or adhesion promoter, making it suitable to ‘receive’ the pattern.

The amount of care exercised in this step decides the life of the print. Poorly primed surfaces can cause the graphics to prematurely lift, leading to bubbles and blisters in the final finish. Little can be done to rectify these issues, often resulting in a complete rework. 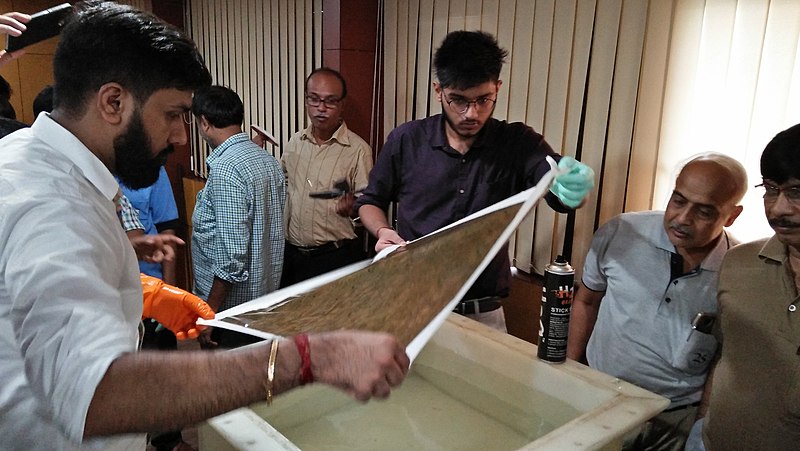 The process of print transfer takes place in a tank of water maintained at around 30°C. The film is carefully laid on to the surface of water with the printed side facing down, ensuring no folds and wrinkles. After the film has been laid it, it is sprayed with an activator. Activators are proprietary chemicals that chiefly contain xylene and an isomer of butanol that serve a two-fold purpose:

Applying an activator is quite critical, in that a poorly activated pattern does not allow the ink to adhere properly to the substrate.

In order to transfer the graphics, the substrate is introduced into the bath of water at an angle. It is then tilted horizontally and slowly lowered into the bath, ensuring even coverage of the surface with the pattern. Once the desired surface has been covered, it is swished around in the bath to eliminate excess ink residue. 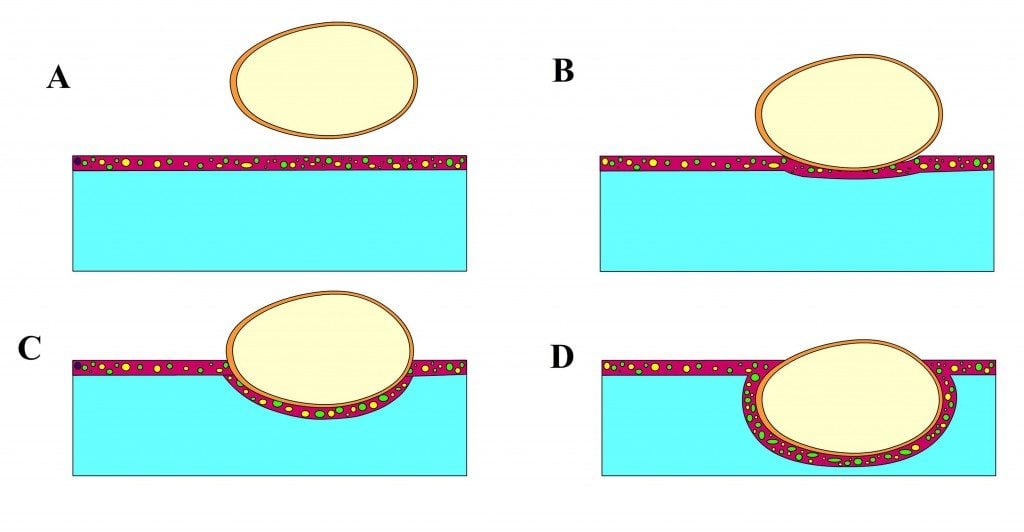 Immersion printing does not cover the substrate entirely

While the ink is engineered to have an irreversible bond with the substrate, it can fail over time due to constant abrasion and exposure to elements. In order to preserve it, the substrate is coated with an acrylic clear coat that can either have a glossy or flat finish. Some clear coats contain UV inhibitors and are specifically applied for objects that are frequently exposed to sunlight.

1. Versatility of substrate materials
2. Complex graphics can be easily printed on contoured surfaces
3. Inexpensive alternative to painting
4. High level of customization available
5. Can be automated for mass-produced items
6. Very durable if applied and maintained properly

1. It is not suitable for very big work pieces
2. When manually done, it requires skilled labor
3. Scope of repair is usually limited
4. It is very difficult to achieve an alignment of design to specific contours of the substrate.

A note on computational immersion printing 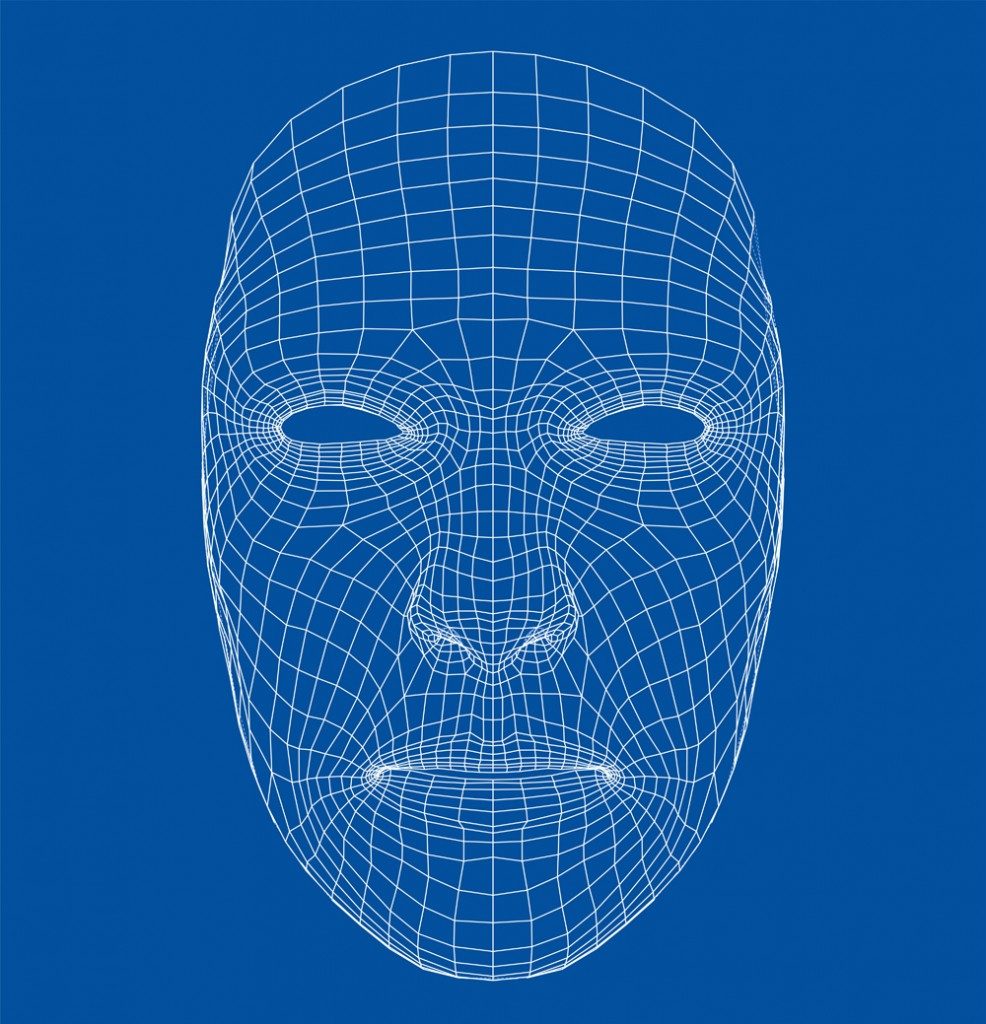 In order to correct this, the object to be printed is first recreated as a 3D shape in computer software. It is mapped with various factors, such as elasticity of the film and ink, and a simulation is run. This simulation determines the most accurate placement of ink on the film while printing it, so that it flexes and gets transferred to the substrate in the most appropriate way.

While most films dissolve in water upon activation, certain films only soften, making it more conducive to conform to the shape of the substrate.

Materials that can be immersion printed

There is virtually no limit to the kinds of finishes that can be achieved using immersion printing. Some commonly used prints include wood finish, carbon-fiber weave, floral prints, and impressions of beloved cartoon and action characters.
Immersion printing can be done on a variety of materials, including plastics, wood, metal, glass and ceramics, such as porcelain.

Immersion printing, however, is very difficult to achieve on items such as rubber and fabric. 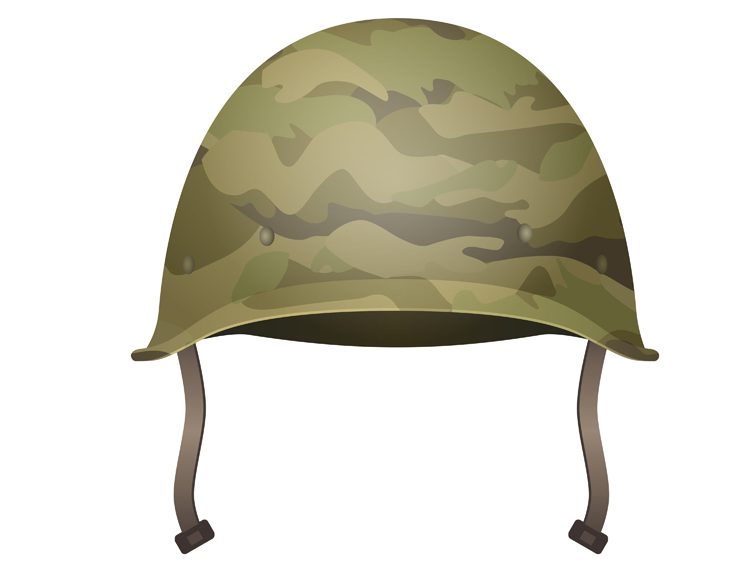 Immersion printing can be used to inexpensively and quickly apply camouflage on various pieces of equipment, such as helmets and the body panels of vehicles and guns. 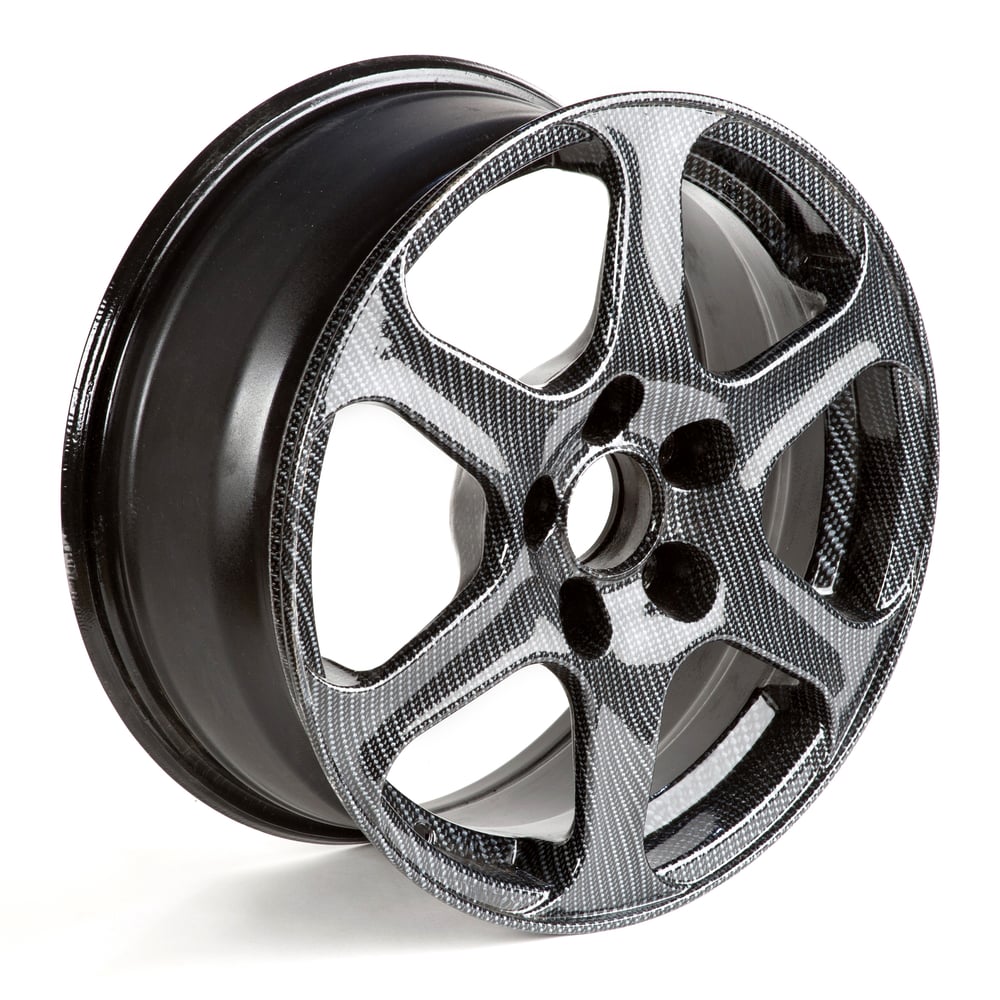 Vehicles can be made to look upscale by replicating the surface finishes of wood grain and carbon fiber, without incurring the expense of using real materials. Immersion printing can also be used to transfer creative graphics on bicycle frames, skateboards and motorcycle helmets, among other things. Immersion printing is also extensively used for imparting exotic finishes to alloy wheel rims. 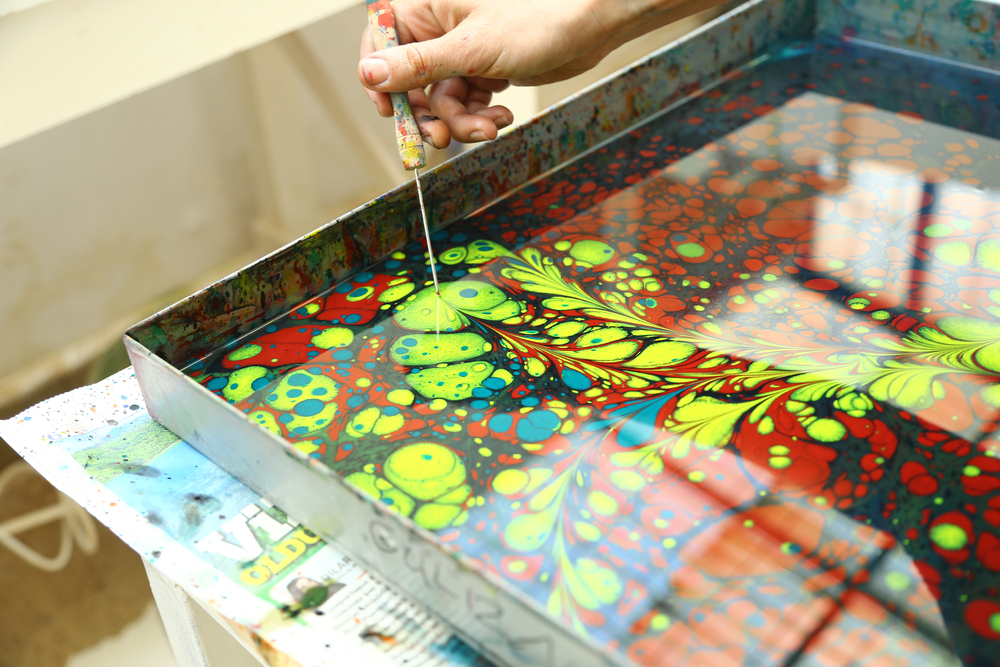 Immersion printing is also widely used for decorating domestic and personal grooming items. It is popular among nail artists, and is used on mobile phone covers, flower vases, door handles and other things with great success. Nail artists use a special type of immersion printing wherein the colors are added directly to the surface of water, rather than through print media. This technique is also known as water marbling.