The human eye reaches its crest of acuity only within a certain realm of dimensions; otherwise, it is terribly myopic. The eye cannot even look past a stretch of pale sand and wet rocks to appreciate a lone, suspended tree in all its splendor and detail, so the neighboring planets are surely out of its poor reach. Similarly, no matter how hard you scrutinize, the eyes are constrained to a particle of sand. They simply aren’t equipped to zoom in any further.

Our limitation is reasonable from an evolutionary perspective. Why spend precious, limited resources developing exemplary vision that would enable us to observe the macro and the microscopic realms, when our standard eyesight suffices for everyday life? Our ancestors didn’t need incredible resolution — the ability to differentiate between two objects – which could have differentiated atoms in a metal, to survive in the African savannah. No, they only required a resolution suitable enough to discern a lion from a bush.

However, to surmount this biological peak, we, out of necessity or sheer curiosity, built tools to extend our reach. Some speculate that it is our capability to build tools to outsmart nature that makes us the most advanced or successful species on the planet. To watch the stars, we built conical telescopes, and to glimpse the concealed menagerie of atoms, we built the microscope. The functions of these two are essentially the same: magnification.

While a telescope makes larger bodies appear smaller, a microscope makes smaller objects appear larger. Both instruments achieve their objectives with the help of lenses that converge and diverge the incident light until it reaches the naked eye, which peeks through the other end. However, our concern here lies only with the microscope. Particularly, it concerns a species of microscopes that don’t distort beams of light, but electrons! It is called an electron microscope (full marks for creativity!).

How Does an Electron Microscope Work? 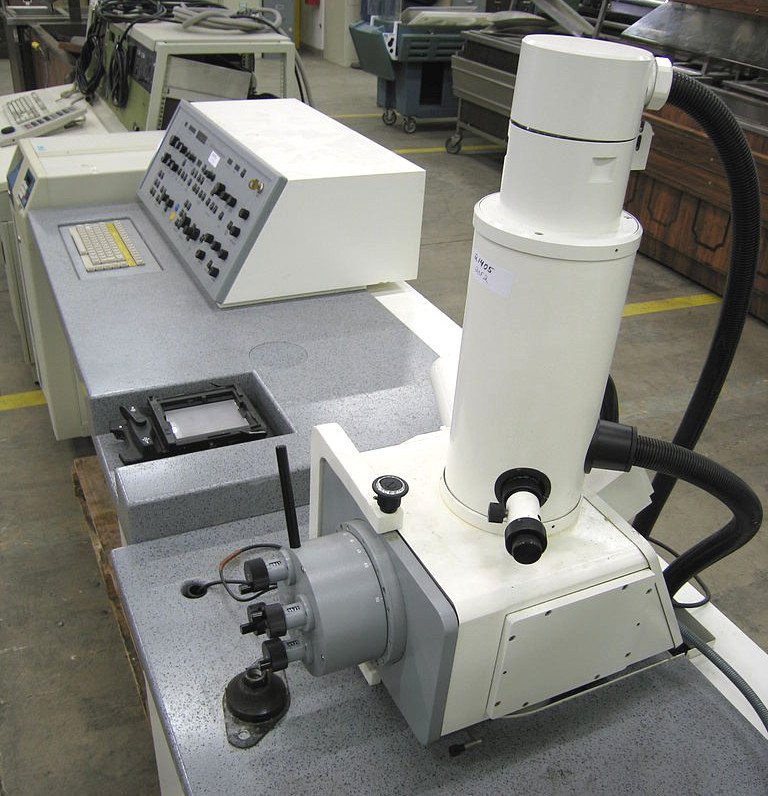 The wavelength of an electron is up to 100,000 times smaller than visible light, a characteristic that makes for excellent resolution. This is because the particles of shorter wavelengths tend to penetrate objects more deeply, thereby providing a view of things beneath the surface – a basketball cannot pass through a slit that is the size of a tennis ball.

The ‘holes’ or more precisely, details, in the image drawn by a basketball are murky, as the basketball never ventured into a meticulous investigation about them; it simply cannot. If a basketball densely engulfed in red paint were to bounce on your floor, it would leave a large red circle behind. Compare this to the detail that a simultaneous bouncing of multiple red-colored tennis balls in the same circle would create.

Owing to its size, a basketball overlooks the finer gaps in between and fills them presumptuously with the same color that surrounds them. This makes for fewer pixels. On the other hand, the tennis ball infiltrates every single slit or gap, thereby generating a more pixelated image. If you were to zoom-in to the less pixelated image, its elements would appear smudged — a canvas of assumptions. Whereas, a more pixelated image would appear sharper and more thoroughly investigated.

The incident electrons themselves are generated by an electron source or gun, such as tungsten, that volubly ejects beams inside the column when the source or gun is powered by thousands of volts. It is imperative that a stark vacuum is sustained in the column because particles in the air or any other medium could collide with electrons and disrupt the instrument’s delicate operation.

Now, because moving electrons are essentially smaller magnets, they can be deflected by larger magnets to either converge or diverge inside the microscope’s column. In an electron microscope, magnets perform the function that optical lenses perform in light microscopes. The highly converged electrons then pelt the surface of the sample under scrutiny. 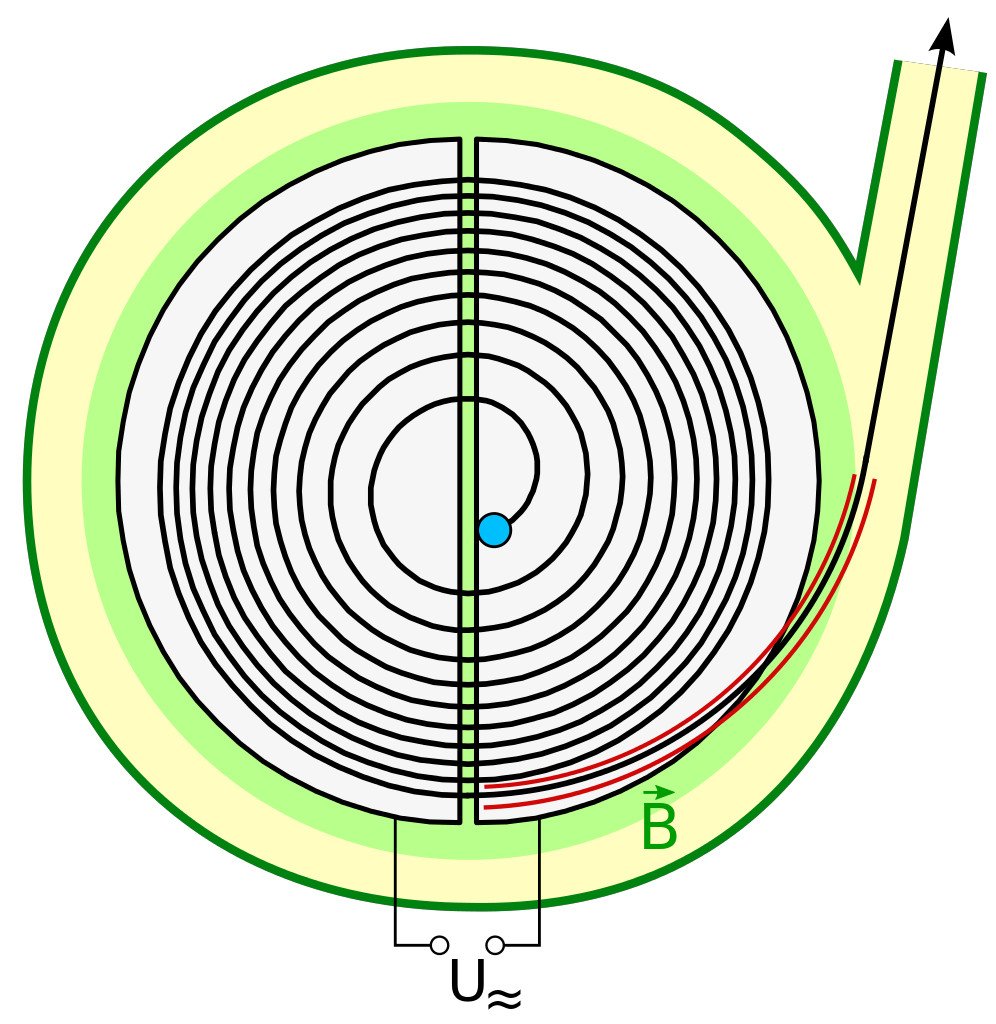 The bending of charged particles by a magnet is the working principle of one of the first particle accelerators, called cyclotrons. The proton is bent by a magnetic field and rapidly swirled in concentric circles until it reaches the outermost circle, at the end of which it is flung outside. (Photo Credit : KlausFoehl / Wikimedia Commons)

The formation of an image depends on the type of electron microscope being deployed. However, in both microscopes, the image is illuminated on a fluorescent screen coated with, say, phosphor reposing at the end of the microscope. The information encoded in the luminance is then relayed to a computer screen for observation or even colorization. Let’s take a look at the two types of electron microscopes.

The two types of electron microscopes are very similar to the two types of light microscopes. The first type is the Transmission Electron Microscope (TEM), whose light correspondent is the compound microscope. The TEM generates a piercing magnification of up to 5,000,000 times. Superlative TEMs are known to even resolve two atoms sitting adjacent to each other! The microscope is therefore used to study deep-lying structures and the individual components of a cell.

The variant is named as such because the two-dimensional black-and-white or grey-scaled image is sculpted by the electrons directly transmitted or, rather, spattered onto the sample. The image is created as a ‘shadow’ cast by the interplay of incident electrons that pass through it and those that are absorbed by dense structures. The darkness of the shadow is a function of an aspect’s density. The incident electrons are technically termed ‘primary’ electrons. 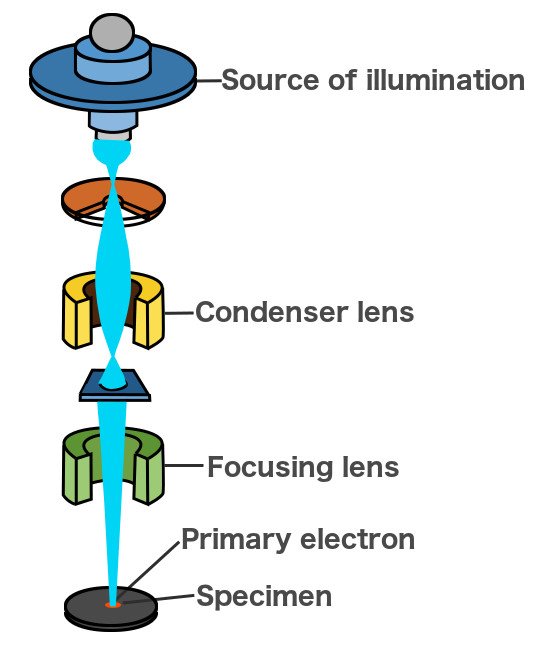 However, regardless of its benefits, TEM also has its disadvantages — the instrument can only study one aspect of a sample at a time; its field of view is grossly limited. What’s more, samples must be extremely thin and must be placed on the pedestal with thorough care and expertise. Even the tiniest of misalignments can gravely distort the image. These constraints can often make the use of TEMs problematic.

These limitations can be overcome by a different type of electron microscope called a Scanning Electron Microscope (SEM). A SEM can magnify samples that are thicker than the ones to which TEMs are accustomed. Their placement, therefore, does not require expertise or tedious prudence. Even better is the fact that the black-and-white images produced by SEMs are three-dimensional!

Furthermore, owing to its wide field of view, a biologist or chemist is endowed with the capability to study the entirety of, say, a cellular structure. The light analogue is the stereomicroscope, which can also generate three-dimensional images by sending light through two optical paths or axes that are offset from each other. The difference in the angle between them translates to a perception of depth. 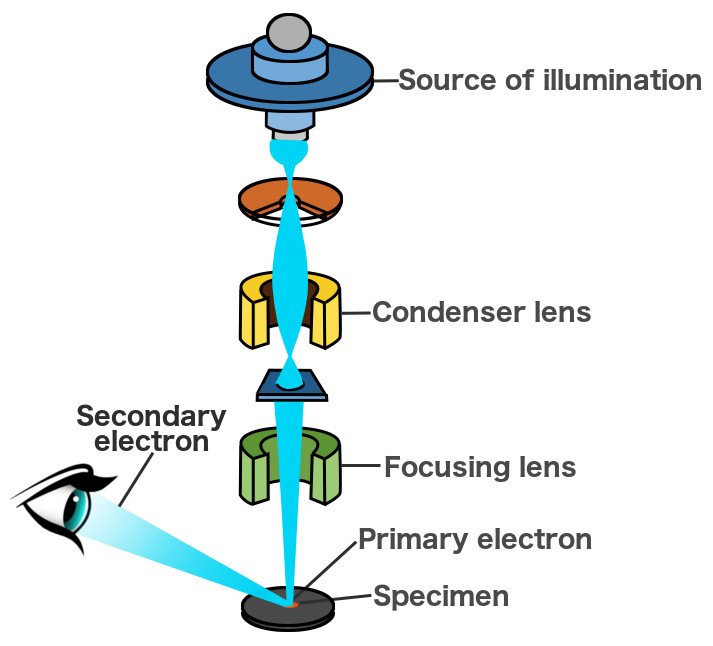 SEMs are primarily used to study surfaces. The primary electrons emanated from the source ‘scan’ the sample’s surface line by line. They excite and knock out the electrons they encounter in their course. The image is then formed by detecting these electrons scattered by the surface. These emitted electrons are known as ‘secondary’ electrons. The surface doesn’t just scatter electrons, but rather a variety of emissions, such as X-rays and even photons. The equipment is equipped with detectors that feed on all of these emissions to draw the magnified image.

However, there is, of course, a catch. All these benefits come at the cost of resolution and, therefore, magnification. It magnifies a surface up to 100,000 times, which is considerably high, but meager compared to a TEM. Of course, this does not necessarily mean that TEMs are better. Each of them is most effective when recruited for a job that best suits their expertise.

In fact, this is true for any microscope — light or electron – particularly when we also consider economic dispositions. If there is one similarity between the two electron microscopes, it is that they are both pretty expensive! 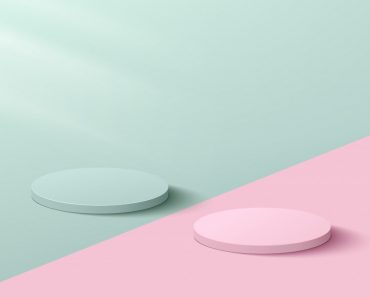 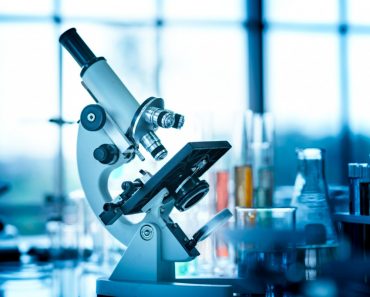