Schlieren imaging is a technique that uses variations in refractive indices to see and photograph airflow.

When you can actually see your breath, you know that the weather is extremely cold, but on a normal day, your breath is as invisible as the rest of the air around you. Could there be a way to capture that breath in a photograph? 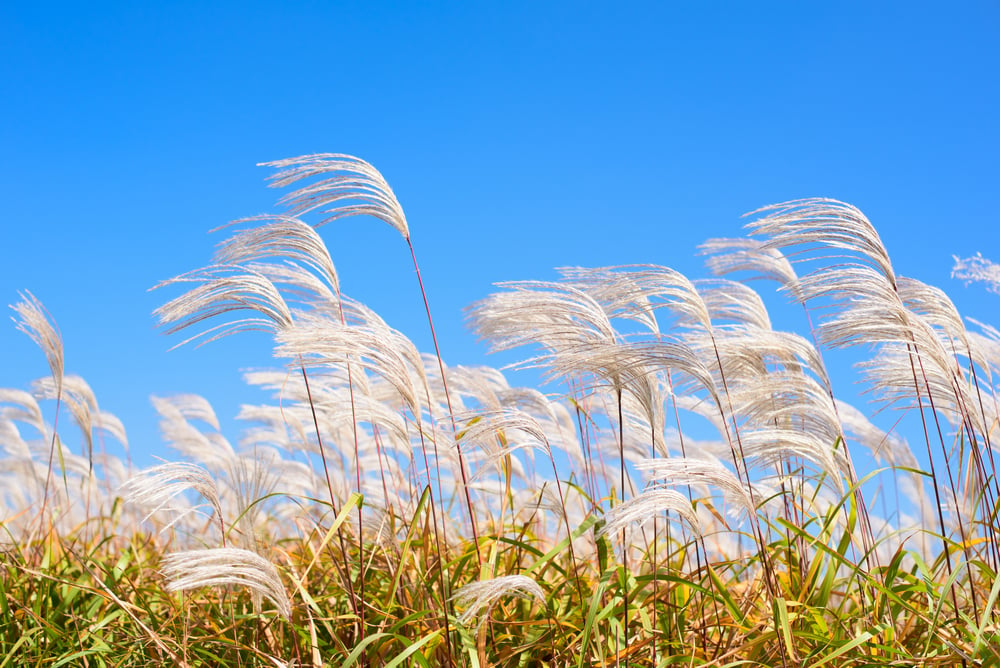 How can you photograph air? (Photo Credit :TippaPatt/Shutterstock)

How can you see and photograph something invisible, like air currents? That is something that has held the interest of scientists studying fluid flow for a long time. Fortunately, a method has indeed been discovered to do exactly that.

What is Schlieren Imaging?

Schlieren imaging is a technique that uses variations in refractive indices in a fluid to visualize fluid flows that are otherwise invisible to the human eye.

This technique is widely used for capturing images of airflow. We can now watch, capture photographs, or capture videos in slow motion, of how air flows and behaves. Schlieren imaging can be used to capture the heat rising off our bodies, the helium escaping from a popped balloon, or the shockwaves from a bullet, just to name a few of the fascinating applications. 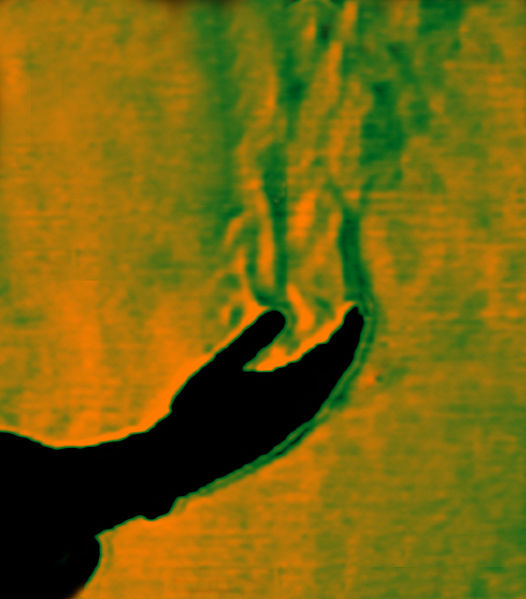 We can even see the heat rising off our hands with Schlieren imaging. (Photo Credit : Gary Settles/Wikimedia commons)

How Schlieren imaging works can be explained via the concept of refractive index. The speed of light changes depending on the medium it is passing through. Light gets refracted or bent when it moves between mediums of different densities. The degree of this bending is the refractive index of a medium. It is the ratio of the velocity of light in a vacuum to the velocity of light in a medium. 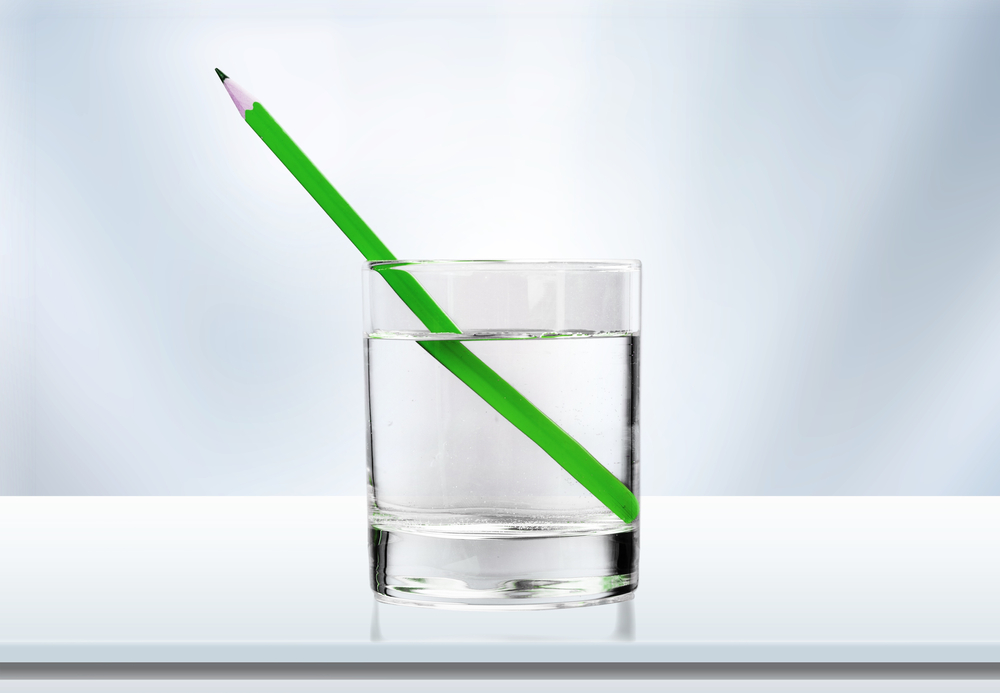 Refraction is why a pencil looks like it’s bent when partially submerged. (Photo Credit : Billion Photos/Shutterstock)

We usually say that the refractive index of air is around 1.0003, but this value varies depending on factors like the temperature, pressure, and composition of air. The Refractive index of hot air, for instance, is less than that of cold air. This is why we might see mirages on the road on hot days. When light passes through a non-homogeneous medium, it undergoes refraction, meaning that it bends slightly to a different path.

These variations in refractive indices in a medium are generally termed “schlieren”, and Schlieren imaging lets us see such variations. With this tool, we can capture and better understand the interactions of an object with the air around it.

With Schlieren imaging, we can see our breath when we exhale. We can observe how a candle flame interacts with the air. We can see the butane pouring out of a lighter, and exactly what happens to the air around it when we ignite it. 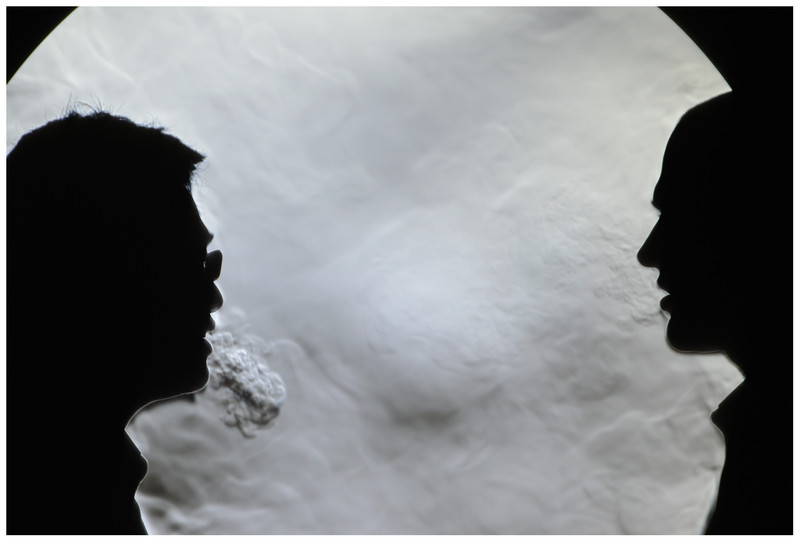 So we can see air, great, but why do we need to see our breath anyway? There are several key applications, but you can watch the video below to observe a particularly interesting one.

Schlieren imaging is used to capture how masks work in controlling the air that we exhale, thus helping to control the spread of the pandemic that has gripped the world in recent years. 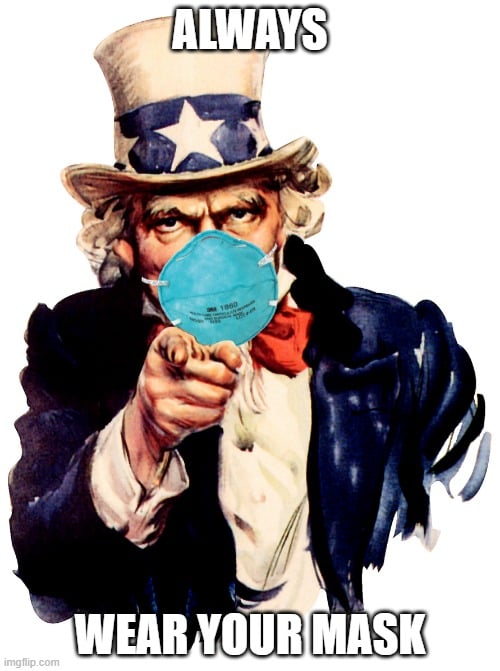 It can be used to capture visuals of shock waves produced in supersonic flows. NASA used Schlieren imaging to capture the shockwaves from its supersonic aircraft. This data will go a long way in the development of future designs for such aircraft. 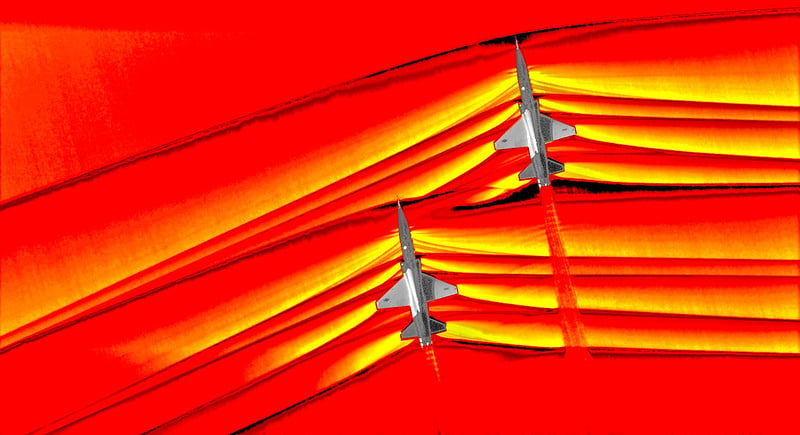 The simplest setup for Schlieren imaging has a light, a mirror, and a camera or a screen.

At one end we have a narrow source of light approximating a point source. The light spreads out, illuminating the object around which we want to observe airflow. The light is then reflected by a concave spherical or parabolic mirror. The reflected rays are then focused onto the focal point of the mirror, where we place a camera. We can place a viewing screen there instead if we’re looking to view images, rather than photograph them.

A thin sharp knife edge is placed in front of the camera, cutting off half of the reflected light. The edge obstructs some of the refracted light, resulting in an image with good contrast. The presence of this knife edge is a defining feature of the Schlieren setup, which differentiates it from a similar technique called shadowgraph imaging.

Alternatively, instead of the edge, we could use a dual-tone color filter, giving us images in color gradients. 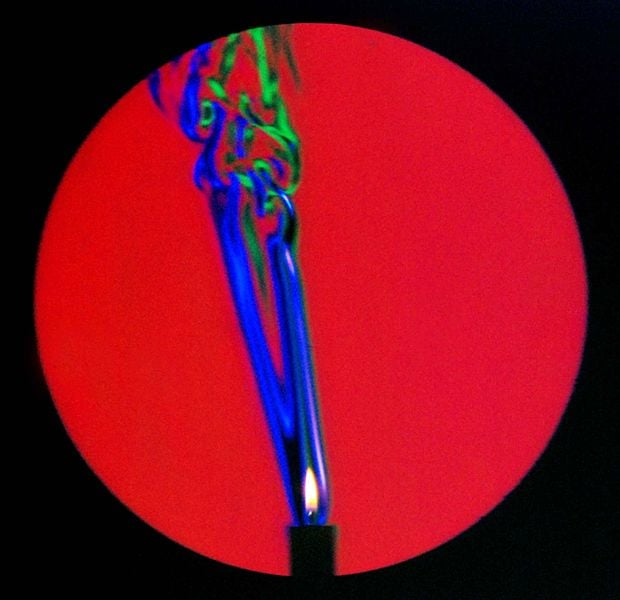 The non-homogeneities in the air—the density variations—mean that some of the light is refracted and some is not. This translates into contrast differences in the picture, giving us a visual.

This setup is called classical Schlieren imaging. A configuration with two mirrors can also be used for better resolution. Lenses are also often used instead of mirrors.

The setup is so simple that you could even try to build one yourself at home! Here’s a video that shows you how!

Another setup for Schlieren imaging is called the focusing Schlieren system. It trades the point source of light for an array of light sources. The image is formed with the help of a cutoff grid. These characteristics also give it the name lens-and-grid Schlieren imaging.

Background-oriented Schlieren imaging is another variation used for larger-scale observation. These come in handy where we can’t exactly put a mirror behind the object, as in the case of the NASA tests of supersonic aircraft we saw above.

With the help of Schlieren imaging, we can now see the invisible. Scientists can use this technique to better understand fluid flow, and we can use it to see how cool a candle flame looks, or better understand how a mask protects us from a deadly virus!