A galvanic or voltaic cell is an electrochemical cell that converts chemical energy into electrical energy. It achieves this by harnessing the energy produced by the redox reactions that occur within the cell. To understand this operation in detail, we must first understand what a redox reaction is.

What is a Redox Reaction?

The word “redox” is short for “reduction-oxidation”. The combinative phrase represents two chemical reactions that occur simultaneously to exchange electrons. The reactant that loses its electrons is said to be oxidized, whereas the reactant that gains these very same electrons is said to be reduced. Note that one causes the other, and it is this causal nature of the reaction that gives the “red-ox” reaction its name.

Here is a simple experiment that illustrates a redox reaction. 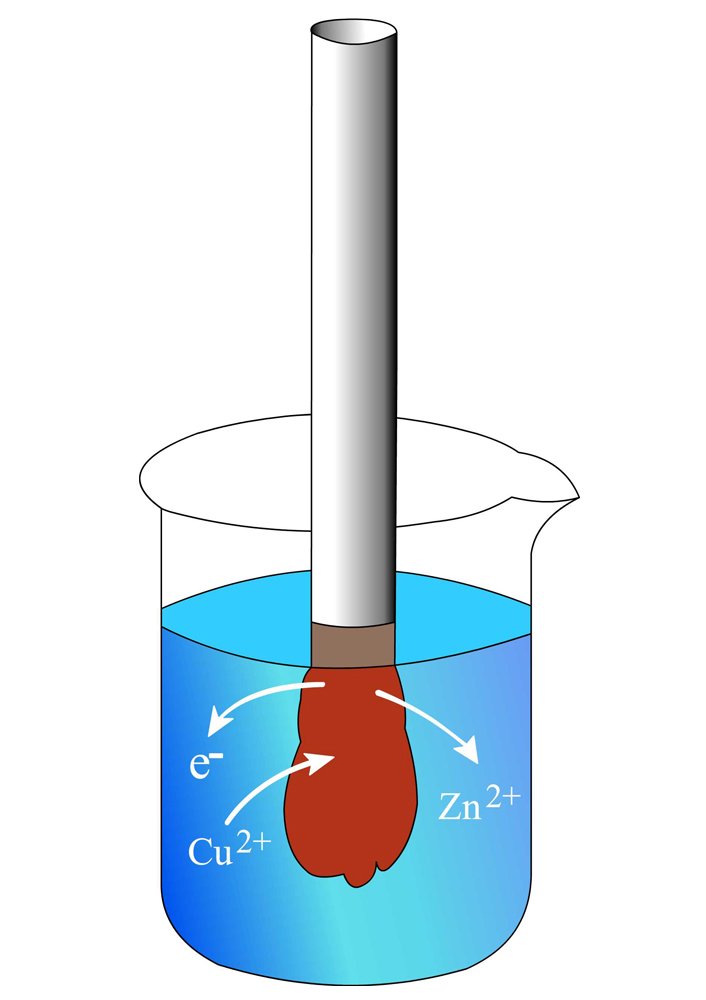 The beaker contains a solution of copper sulfate (CuSo4), in which a strip of zinc is dipped. Copper is more electronegative than zinc, meaning that it exhibits a greater tendency to attract electrons and form negative copper ions. As soon as the strip is dipped into the solution, the copper ions (Cu2+) seize the zinc’s electrons to form copper atoms (Cu), which deposit as a brownish layer on the strip, while the zinc atoms (Zn), now deprived of electrons, become zinc ions (Zn2+), which dissolve into the solution. At the end of the reaction, the strip has become heavier and the solution is replete with zinc.

In the quick reaction between the metals, copper is reduced as it gains electrons, while zinc is oxidized as it loses electrons (remember OIL RIG). Electricity is just the flow of electrons — the electrons exchanged in the reaction can be used to, say, power a bulb, but this cannot be achieved in our beaker, for the electrons in it are carelessly dispersed. To harness them, we must somehow, before they are seized by copper, route every electron in the bulb. This can be achieved with not one, but two beakers.

Now, consider this apparatus, which represents a galvanic cell. 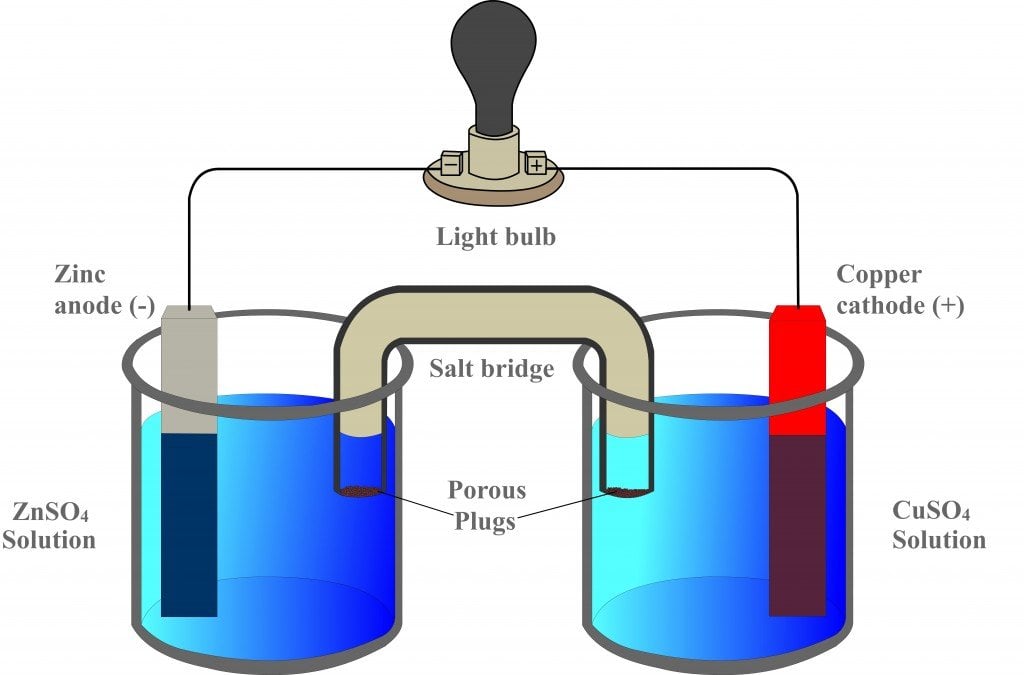 The cell is named “galvanic” after its inventor, the physicist Luigi Galvani. In 1780, Galvani demonstrated that when two different metals are connected to each other at one end, while the other ends are connected by the legs of a frog, the legs contract, indicating the flow of electricity. He called his absurd apparatus “animal circuitry”. However, to challenge Galvani, Alessandro Volta developed the same cell without a single biological component. This was an incredible achievement and, for this reason, “galvanic” and “voltaic” are used synonymously.

Even though their circuits worked, the inventors were incorrect about why they worked. Galvani believed that the frog was responsible, while Volta believed it was the properties of the isolated metals. It was Faraday who was finally correct in realizing that the electric energy was derived from chemical reactions, that the source of voltage was purely chemical. It was Faraday who coined the terms that now form electrical and electronic jargon: the metals he called electrodes – cathode and anode, the solution in which they were dipped he called electrolyte, and the entities involved he called ions – cations and anions. 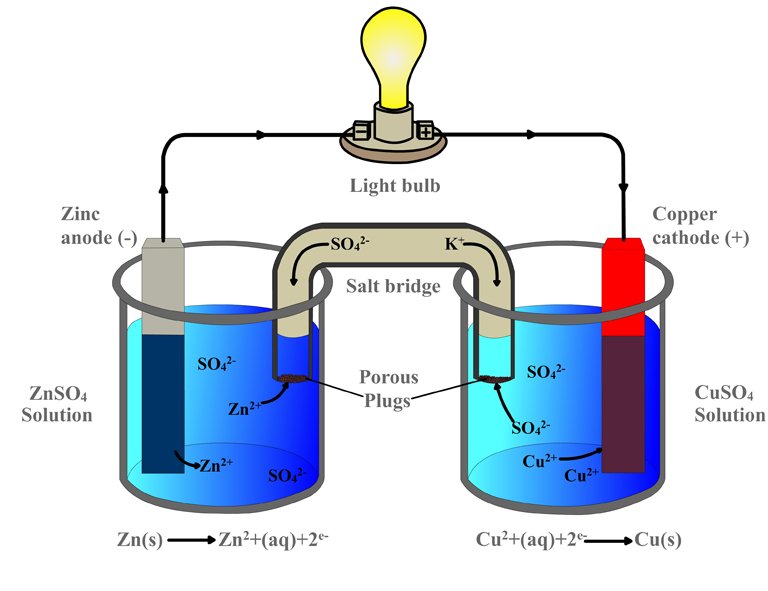 As soon as the zinc and copper electrodes are dipped into their respective sulfate electrolytes, the redox reaction begins: copper begins to lure zinc’s electrons. Just as it occurred in the single beaker experiment, the zinc atoms in the first beaker are oxidized and therefore lose their electrons and become zinc ions, which dissolve into the zinc sulfate solution. The copper ions in the adjacent beaker are reduced as they gain these electrons and become copper atoms, which deposit on the strip. 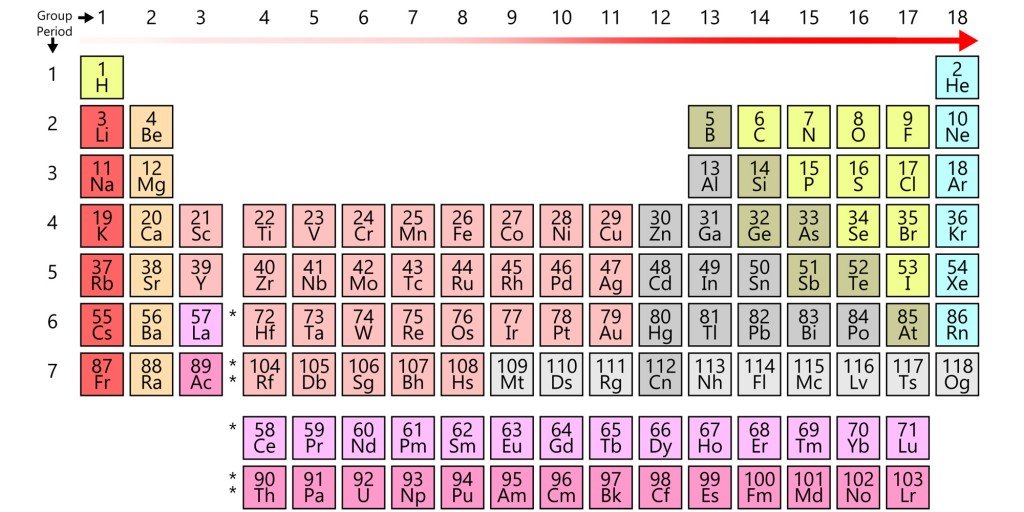 However, the labels conform to the standard convention. The battery’s anode, the zinc strip – and this might confuse the reader – is actually positive, since it is deprived of electrons due to oxidation, while the battery’s cathode, the copper strip, is actually negative, since it is abundant in electrons due to reduction. Zinc is the positive electrode, but the negative terminal, while copper is the negative electrode, but the positive terminal. This distinction is critical.

What is the Salt Bridge?

Even though the electrons are successfully made to flow through the conductor and therefore the bulb, the bulb will not glow, because the circuit is still incomplete. What completes the circuit is the tube in the diagram, whose legs are dipped in both the beakers. This is called a salt bridge. The salt bridge is a porous substance composed of a salt on which electrons cannot travel, but cations and anions can. By forbidding the flow of electrons, it automatically excludes itself from participating or interfering in the process. Its sole purpose is to exchange ions and complete the circuit.

When zinc oxidizes and dissolves into the solution as a zinc cation, the zinc cation traverses the bridge and enters the adjacent beaker. There it forms zinc sulfate by replacing the copper cation, which, mixed with the sulfate anion, before being reduced, formed the copper sulfate solution. Similarly, when the copper cation reduces to form a copper atom, the sulfate anion left behind traverses the bridge and enters the first beaker. There it combines with the oxidized zinc cations to form zinc sulfate. The exchange ensures that the reaction is balanced, or that the circuit is completed. The representation of a galvanic cell or the two beakers connected by a porous salt bridge can be further reduced to this: 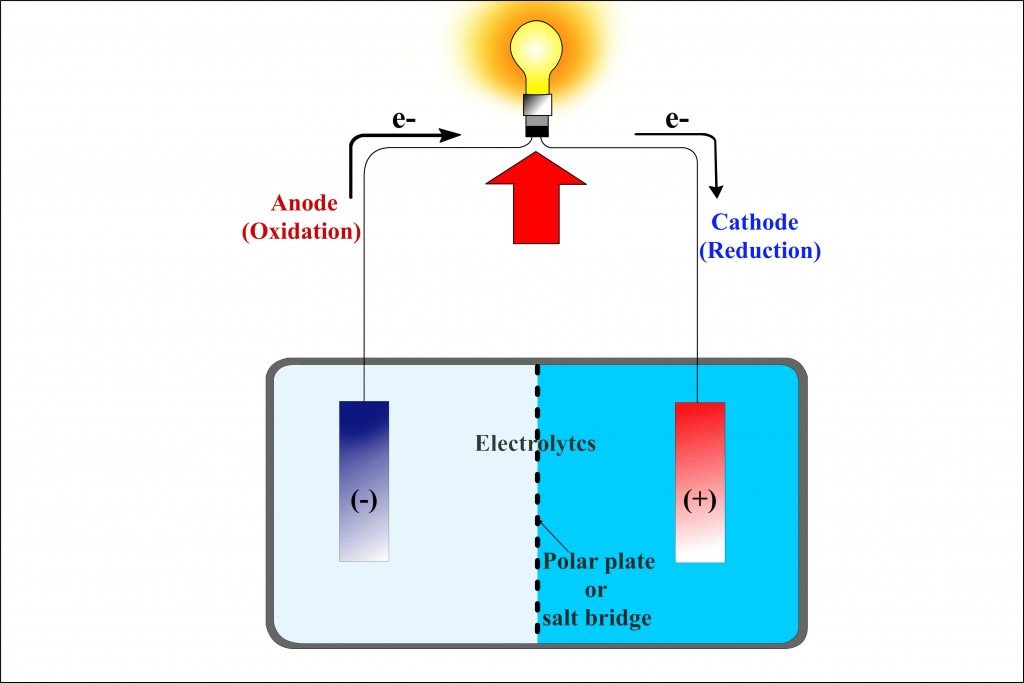 As the reduction and oxidation reactions occur physically separated in two different beakers, each beaker or unit is called a half cell. The nature of the voltage, in virtue of the singular direction of the flow of electrons, is DC. The magnitude of this DC voltage is the arithmetic difference of the voltages in the two half cells. The difference gives a relative measure of the ease of dissolution of the two electrodes into the electrolyte. The voltage is therefore a function of the properties of both the electrodes and the electrolyte. Remember – and it’s worth mentioning again – that the voltage is purely chemical.

The majority of batteries are actually based on lead and lead oxide as anode and cathode, respectively. Even the salt bridge doesn’t necessarily have to be composed of the same salt the metals form. It merely needs to provide the necessary number of cations and anions to balance the reaction. In our example, if it were to be composed of potassium, it would donate two cations of potassium for a single cation of zinc. 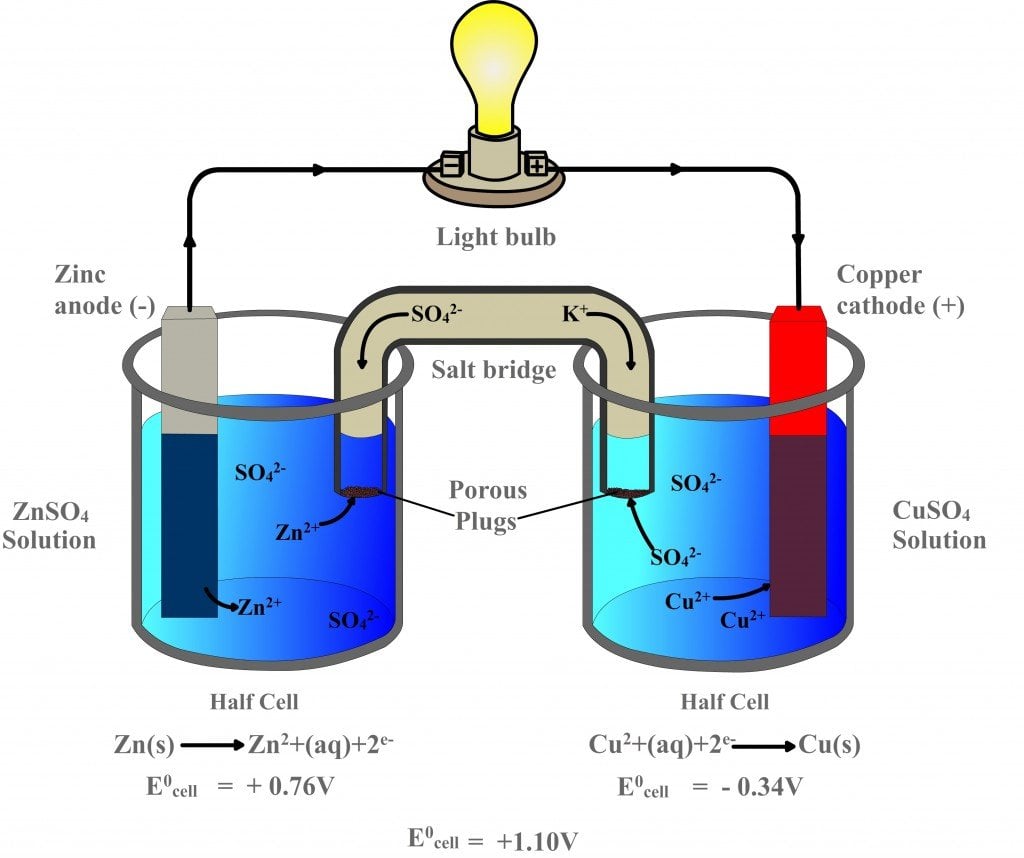 Lastly, once dead, galvanic cells cannot be revived or recharged. This is why one must change the batteries in an alarm clock or remote control from time to time. The kind of electrochemical cell that can be recharged is an electrolytic cell. An electrolytic cell also consists of two beakers filled with electrolytes into which electrodes are dipped, but it achieves the complete inverse of what a galvanic cell does: it converts electrical energy into chemical energy.

The electrodes are connected to an electrical source via an external circuit. However, the potential generated by this source is greater than the potential created by the redox reaction. What’s more, the source is installed in the opposite direction. Therefore, as a result of its greater potential, it overcomes the force of the incoming electrons and forces them to reverse their direction. The electrons then flow from the copper strip to the zinc strip, such that copper is now oxidized, and zinc is reduced. In this way, unlike a galvanic cell, which produces current from a redox reaction, an electrolytic cell uses electric current to drive a redox reaction. Later, the battery can be replaced with a bulb, making the cell galvanic, only fully charged. 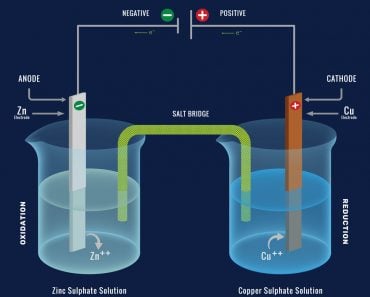 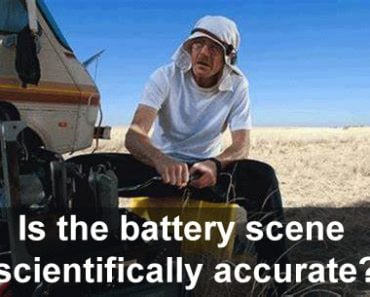