Engine knocking is the pinging sound resulting from premature ignition of the fuel-air mixture, while the octane rating of fuel is the measure of its ability to prevent this undesired knocking sound.

Engine knocks or knocking in car engines is a very common phenomenon and is caused by a variety of reasons. The most common cause is the unnatural or irregular combustion of fuel. Other reasons resulting in a knocking or pinging sound include an incorrect fuel-air mixture, a damaged spark plug, carbon deposits on the cylinder walls or use of low-octane fuel. 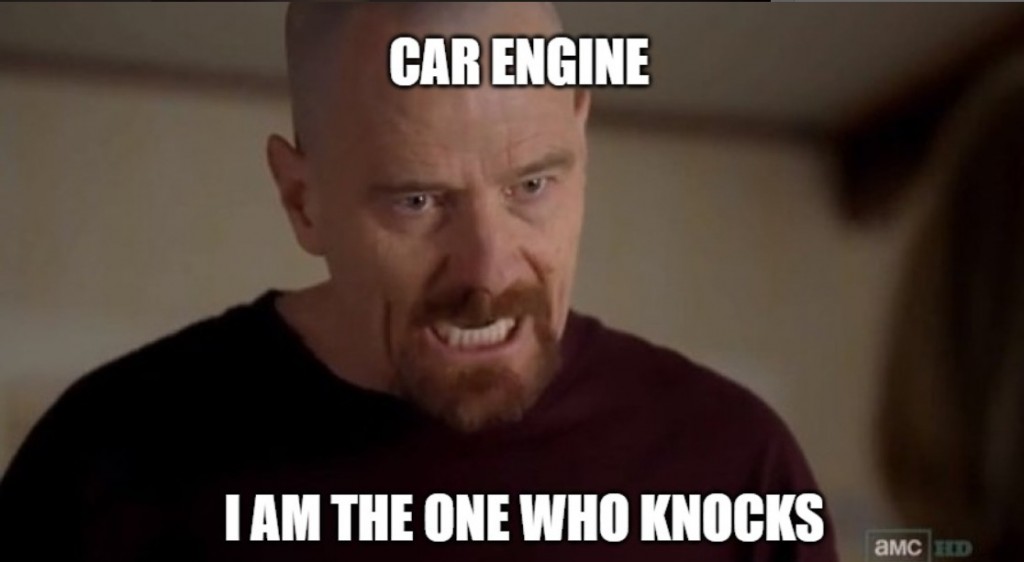 Heisenberg isn’t the only one who knocks; your car engine does too.

To understand why your car engine produces this unusual knocking sound, we will first need to understand how an engine actually works.

How does your car engine work?

The engine in your car is either a petrol engine or a diesel engine. These engines are scientifically known as spark-ignition engines and compression-ignition engines, respectively. These two engines, aside from using different fuels, also have a slightly different operating procedure. The SI engines use a spark plug to trigger the combustion of the air-fuel mixture, whereas CI engines rely on compressing the mixture to a higher degree to prompt natural combustion. SI engines are commonly used in vehicles like cars and motorcycles, whereas heavy vehicles like buses and trucks employ CI engines. Let’s take a detailed look at how spark-ignition engines work using the GIF below.

The working of a spark-ignition engine can be broken down in 4 steps, more accurately referred to as 4 strokes. The 4 strokes are the air intake stroke, compression stroke, power stroke, and exhaust stroke.

In actuality, the working of an engine is not that simple, and there’s a lot that goes on behind the scenes. However, in order to know what causes engine knocking, one only needs to know the basics and what you just read is more than enough. Now, let’s move on to what prompts the knocking sound.

How does knocking occur?

As already mentioned, the irregular ignition of the fuel-air mixture is the primary cause behind the knocking sound in engines. In a properly functioning engine, the mixture combusts when it comes in contact with the flame front created by the spark. The combustion of the mixture is accurately timed with the downward movement of the piston and, consequently, the crankshaft angle.

In an engine prone to knocking, some parts/pockets of the mixture combust even before coming in contact with the flame front (demonstrated in the last illustration).

A certain pocket of the mixture may explode when subjected to a combination of heat and pressure. Engines with higher compression ratios have a higher tendency of preignition and, thus, knocking.

Another reason for knocking is the deposition of carbon on cylinder walls and other components. Carbon deposition leads to a decrease in the overall cylinder volume. As a result, the mixture gets compressed significantly more, eventually inducing knocking. Using a faulty or incompatible spark plug and a low-octane fuel also leads to knocking.

What is the octane rating of a fuel?

Regular knocking damages and, in extreme cases, destroys engine parts. Shock/pressure waves created by abnormal explosions of mixture pockets force engine parts to vibrate like an old Nokia. Knocking may also overheat the spark plug and decay or rupture areas of the combustion chamber. More than anything, knocking causes the inefficient operation of the engine. 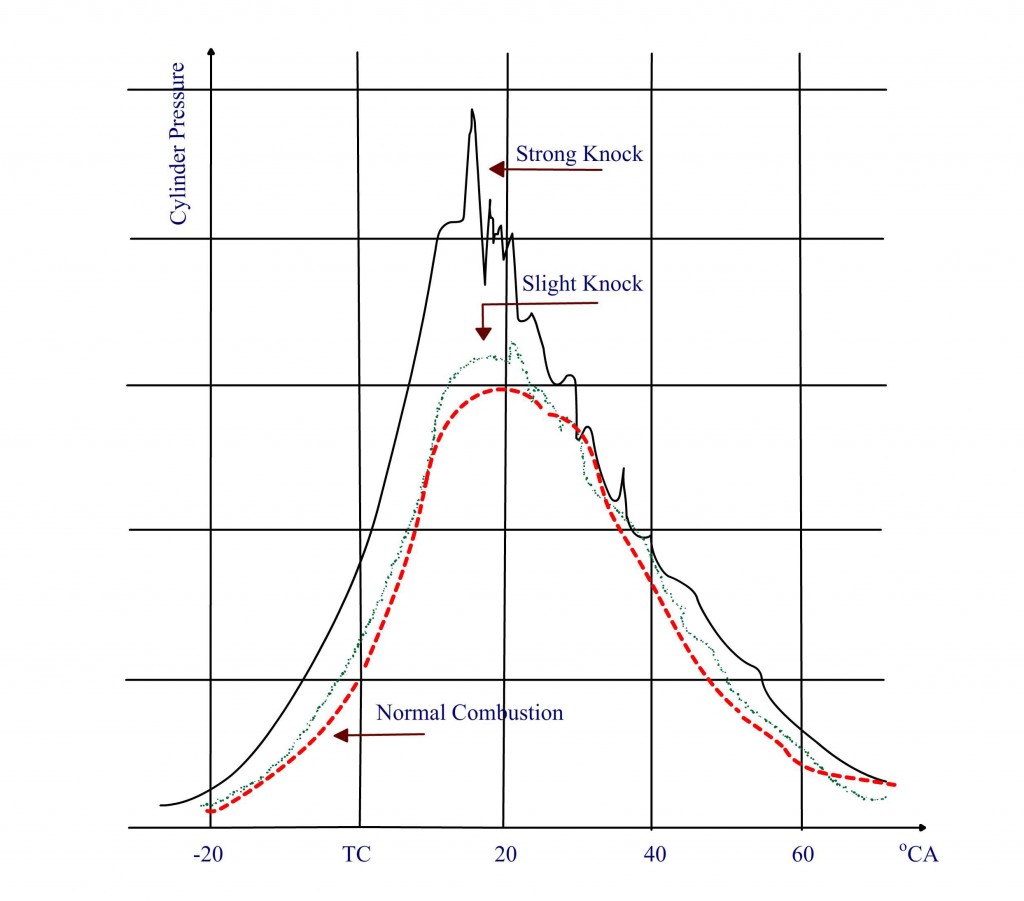 The increased pressure because of knocking can lead to a variety of problems. Damage to engine parts and performance issues being the most critical.

However, the octane rating for fuels is employed only for engines that work on gasoline, i.e., SI engines. Diesel engines, which do not compress the fuel, but rather compress air and then inject fuel, use another rating convention called the cetane number.

A fuel with a high octane rating combusts at high temperatures. Hence, more compression is required for it to ignite by itself.

Therefore, using fuel with a higher octane rating eliminates the possibility of pre-ignition and, thus, knocking.

Apart from using fuel with a high octane rating, knocking can also be prevented by using spark plugs recommended by your car company, creating a slightly richer air-fuel mixture, possessing an engine with a lower compression ratio, etc. Adding a knock control sensor under the hood can further help one monitor this knocking phenomenon.

However, most of these methods are something that a typical consumer can’t exercise by themselves. So, whenever your car starts knocking like Heisenberg, you better call Saul from your nearest garage and get the problem sorted out!