Imagine that you just finished a long day at college and took the metro to get home. Quite conveniently, you connected to the public wifi in order to stream your favorite podcast before realizing that your mobile battery was running quite low—below 15%. You are in a dilemma! Not wanting to pause the podcast, but also wanting to preserve just enough battery to reach home, you turn wifi off and turn mobile data on. Even so, the battery still got drained. In the end, you turn everything off and keep the phone on battery saver. 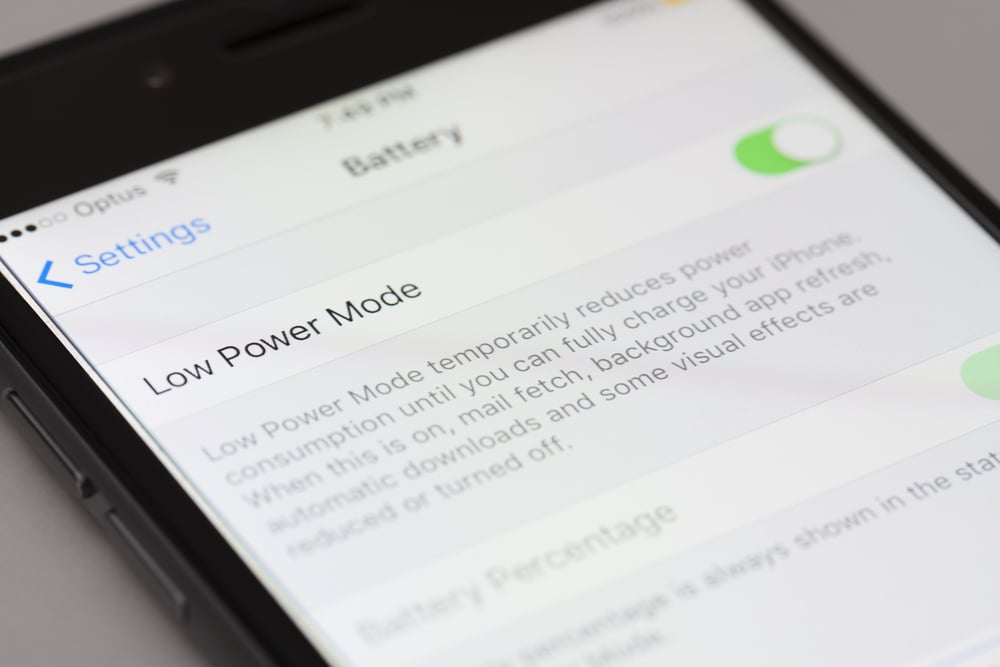 Is there anything else you could have done in this situation? Let’s find out.

Why A Network Connection Drains Battery

Whether a phone uses wifi or cellular data, communication with other devices requires the transmission of data. This transmission involves two processes. The first is the generation and propagation (i.e., sending) of data. The second is the retrieval of data. This is achieved by using a transmitter (to generate data) and a receiver (to retrieve data) antenna.

The transmitter contains a long, thin conductor connected to an alternating current (AC) supply. The electrons start oscillating when AC current flows. Oscillation involves the acceleration and deceleration of electric charges. Accelerating charges produce electromagnetic (EM) waves, which propagate in all directions. Data is transmitted in the form of EM waves.

EM waves propagate in all directions from the antenna. Any receiver within range (Image Credit: pxhere)

The receiver also contains a long, thin conductor. When EM waves strike the antenna, the electrons absorb energy and start oscillating at the same frequency as that of the incident waves. This electronic oscillation creates an AC current in the receiving antenna, which is then converted to a suitable form (sound, video, text, etc.).

Thus, it is evident that energy is used when transmitting and receiving data. This energy is provided by the phone’s battery.

Power output at the receiver antenna drops by the inverse square of the distance from the transmitter. Thus, doubling the distance between the antennas decreases the power output by four times. To ensure that the signal strength doesn’t wane, more power is required at the transmitter, which comes at a cost to the battery.

To establish the disparity of power consumption between GSM and Wi-Fi, some typical usage scenarios were simulated. These scenarios included emailing, downloading random data, and web browsing. The device used was OpenMoko Neo Freerunner. Two other devices, HTC Dream and Google Nexus One were used to validate the initial observations on Freerunner.

Mobile data and Wi-fi were alternately used to perform the aforementioned tasks. The power consumed is measured by multiplying the voltage supplied and the current drawn during that specific task.

The power usage for receiving and reading five emails, and replying to two of them, is as follows:

1.0 KB/s. The former’s higher power consumption over Wi-Fi was explained by the greater power required to process data that is downloaded at a higher throughput.

It is evident that browsing over GSM consumes more power than browsing over Wi-Fi. This is because a background connection to the cellular network is maintained at all times to receive calls and texts. 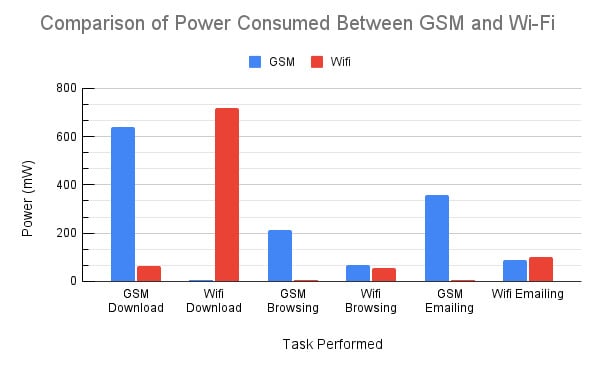 Column plot of power consumed for GSM versus Wi-Fi testing

The energy consumption and energy efficiency of GSM and Wi-Fi to stream videos were compared at different locations inside a university campus. The video was played at three different display qualities. Four locations were considered. The findings were as follow:

Here, QL 1 boasts the highest quality and QL 3 is the lowest quality.

For all quality levels, mobile data consumed more energy than Wi-Fi. The lower the streaming resolution, the greater the disparity. This is because streaming at lower quality requires less energy consumption, but the phone maintains a baseline cellular connection to receive texts and calls, which adds to battery drain. 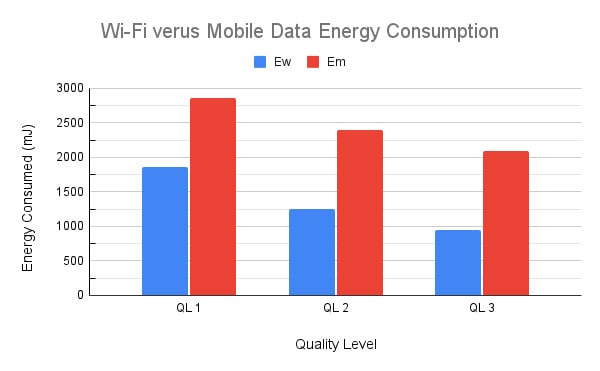 It is evident that mobile data consumes more energy than Wi-Fi in real-life scenarios. This is because a cellular connection must always be maintained for calls and texts. Also, cellular towers are generally very far away, as compared to Wi-Fi routers. In areas with weak cellular coverage, the phone receives a weak signal, which translates to the phone trying even harder to maintain the network connection. This draws even more power.

Also, shifting from one place to another results in the switching of connections from one cellular tower to others. This also contributes to battery drain. On the contrary, Wi-Fi routers are generally no farther than 100 m, which is significantly less than tower-to-phone distances. Since Wi-Fi connections are not mandatory for calls and texts, the energy consumed by Wi-Fi drops nearly to nil when not in use!