Before we get started, watch this scene from the movie Spiderman 3.

Towards the end of the scene, you see that Harry (a friend of Peter Parker, aka Spiderman) is laid on the operating table in a hospital room. The doctor rubs a pair of paddles together, shouts ‘Clear!’ and the doctor zaps him with the paddles.

You may have seen those zapping paddles in many movies or television shows where someone is being brought back from the dead by zapping them with an electric current. Out of everyone who has seen that device being used in movies and TV shows, I wager that more than 70% of the people don’t know what the machine actually does. 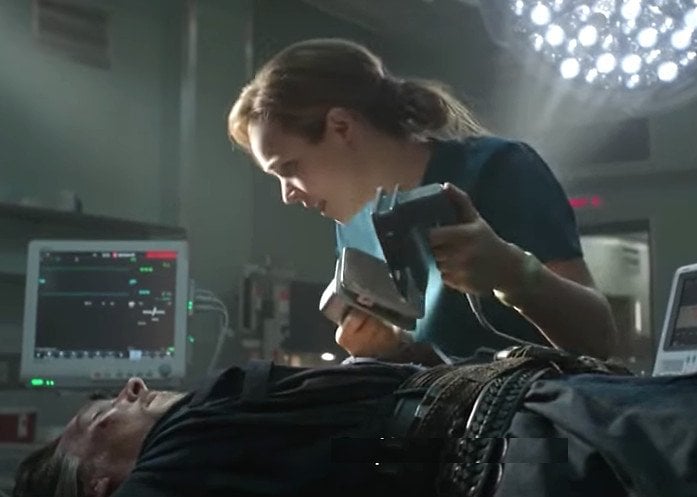 Many would simply say that the device restarts a patient’s heart (which may have stopped beating due to some injury or trauma), thereby bringing the patient back from the dead. This is what popular culture leads you to believe, but I have news for you…. that’s not what those devices – known as defibrillators – actually do.

The human heart relies on small electric currents to contract and pump blood out into the arteries. Have you ever seen an electrocardiogram (ECG) report? It basically measures the electric currents passing through your heart. 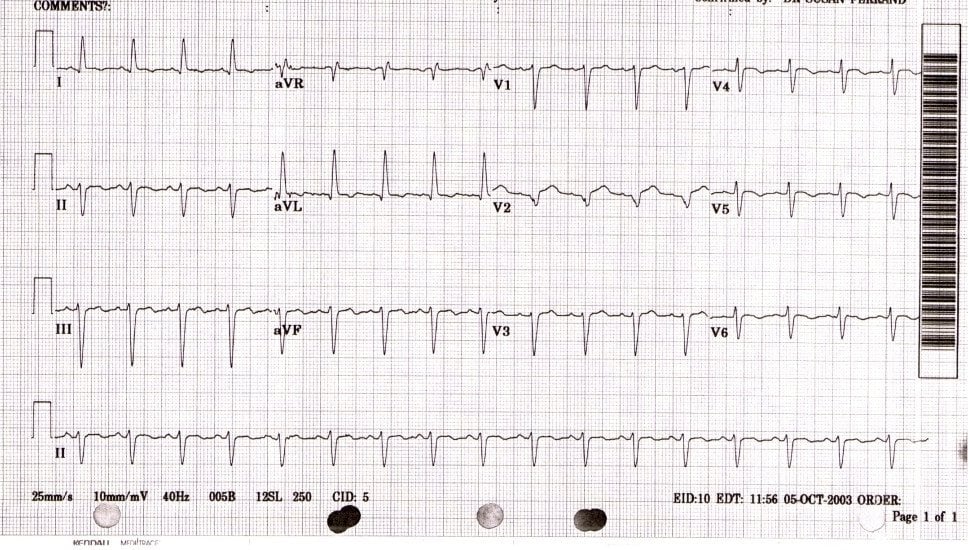 However, when those electric currents go haywire, so does the pumping action of the heart. As a result, the heartbeats become erratic or irregular. This is when a technique called defibrillation is used. 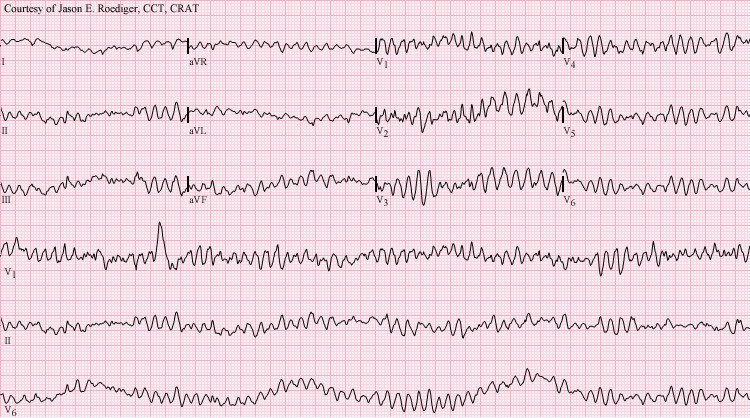 An ECG showing ventricular fibrillation – a condition when the heart quivers, rather than pumps, due to disorganized electrical activity in the ventricles of the heart. (Photo Credit : Jer5150 / Wikimedia Commons)

Defibrillation is carried out with the help of a device called a defibrillator.

A defibrillator is a machine that delivers a controlled amount of electric current (called ‘countershock’ in medical lingo) to the heart. A defibrillator is used when the heartbeat of the patient is erratic, or out of rhythm, if you will.

When a person suffers from cardiac arrest, there are a number of things that could potentially be happening to their heart: they could have a rapid heart rhythm (tachycardia), a disorganized electrical rhythm that doesn’t allow heart muscles to contract (fibrillation), or they could have no electrical current passing through their heart (asystole). In some of these situations, a defibrillator can be used to help the patient.

An automated external defibrillator ready for use. Pads are pre-connected. This model is semi-automatic due to the presence of a shock button. (Photo Credit : Creative Commons Attribution 3.0 Unported / Wikimedia Commons)

How do defibrillators work?

The paddles/stickers of a defibrillator, when attached to a patient’s body, pass a limited amount of electric current and depolarize a large amount of the heart muscle, which subsequently ends the dysrhythmia. In simple terms, a defibrillator stops the heart altogether, contrary to the popular belief that it restarts the heart.

All versions of defibrillators usually consist of two paddles or stickers that are placed on the patient’s body in a very specific position in order to pass the desired amount of current through the patient’s heart. 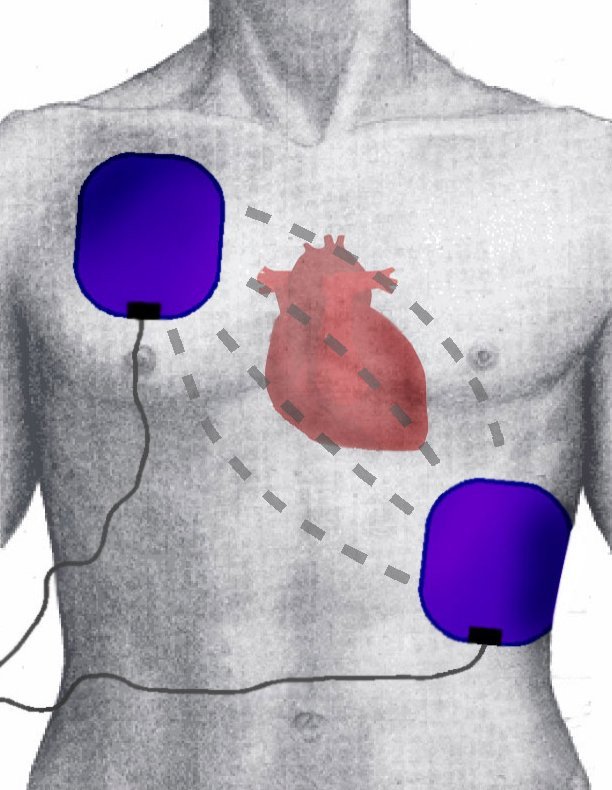 All in all, a defibrillator doesn’t revive a patient by restarting the heart; in fact, it stops the heart completely, thereby ‘resetting’ the heartbeat in a way. The heart then resumes its beating fresh, this time following a rhythmic pattern, provided that everything goes alright. 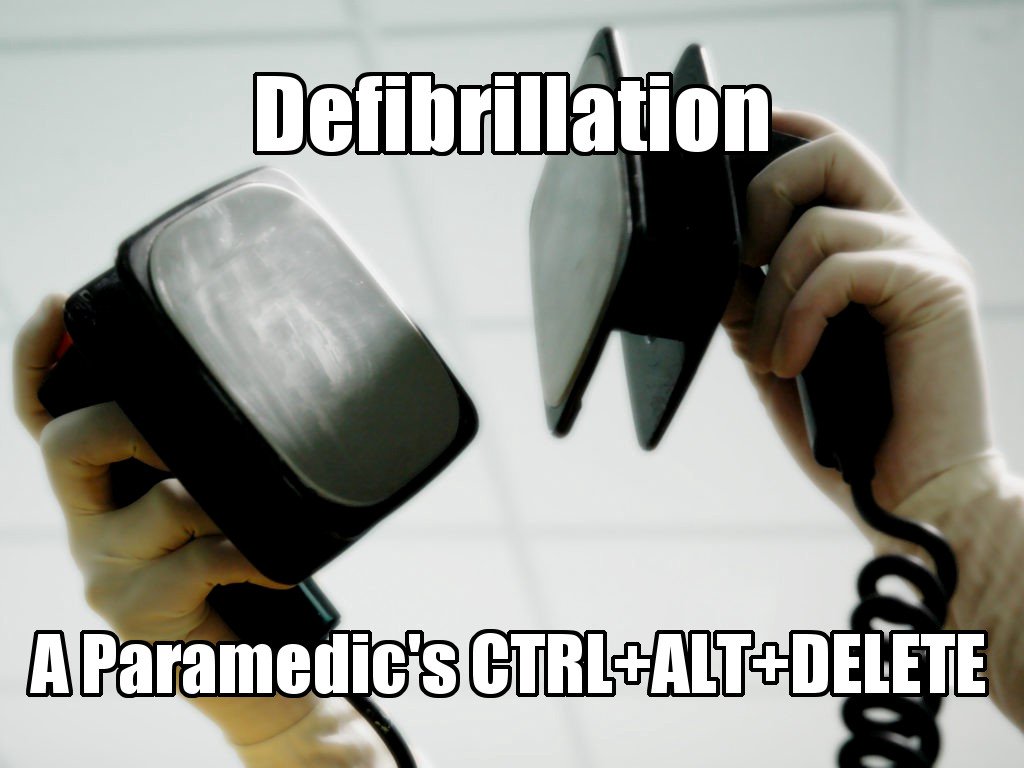 Why do doctors say ‘Clear!’ before using a defibrillator?

Doctors always loudly say ‘Clear!’ before placing the paddles on the patient’s body and passing an electric current through it. Why?

This is because defibrillators pass an electric current through the patient’s body. Thus, if anyone else is touching or has any sort of physical contact with the patient at the time when the doctor administers the shock, they may also get shocked. That’s why a doctor yells ‘Clear!’ just before administering the shock to the patient, so that anyone touching the patient knows to ‘clear away’.