It is not the Voltage that can kill humans, it is the current that kills. Humans have died at as low as 42 volts. Time is also a factor. A current of 0.1 ampere for a mere 2 seconds can be fatal. As Voltage = Current x Resistance the current depends on body resistance. The internal resistance between the ears is only 100 ohms, while it is around 500 ohms when measured from finger to toe.

Electric shocks are often depicted in physical comedies, and the plot proceeds as usual: the comic protagonist accidentally gets to a wire without knowing the high current that flows through it. He receives a fatal shock that leads to a stereotypical shimmy, a charred face and hair that ends up like an umbrella turned inwards by the wind.

The question of why this fatal accident is perceived as humorous is disturbing… interesting, but disturbing. A plausible answer can be found here. However, this discourse is irrelevant at the moment. What worries us is why we are not at all insensitive to electricity and how much of it will actually kill us.

Why Is High Voltage Considered Dangerous?

This is, of course, essential knowledge for safety purposes. On electrical circuit boards and generators, we find cautious messages with the common symbol of danger: a human skull hovering over two crossed bones.

This symbol is accompanied by the rating of this machine, which highlights the high voltage under which it operates and lets you know that you would probably be killed by contact with it. The use of voltage has set a psychological trend in us.

We now believe that 10,000 volts would be more lethal than 100 volts. However, this is only partially true.

Electric shocks can often occur at household voltages of 110 volts or in some cases even at 42 volts!

Of course, more voltage draws more current, but it is not the caliber that kills us, but the bullet it shoots. Whatever the voltage, the true cause of death is the current that is pushed through the body. 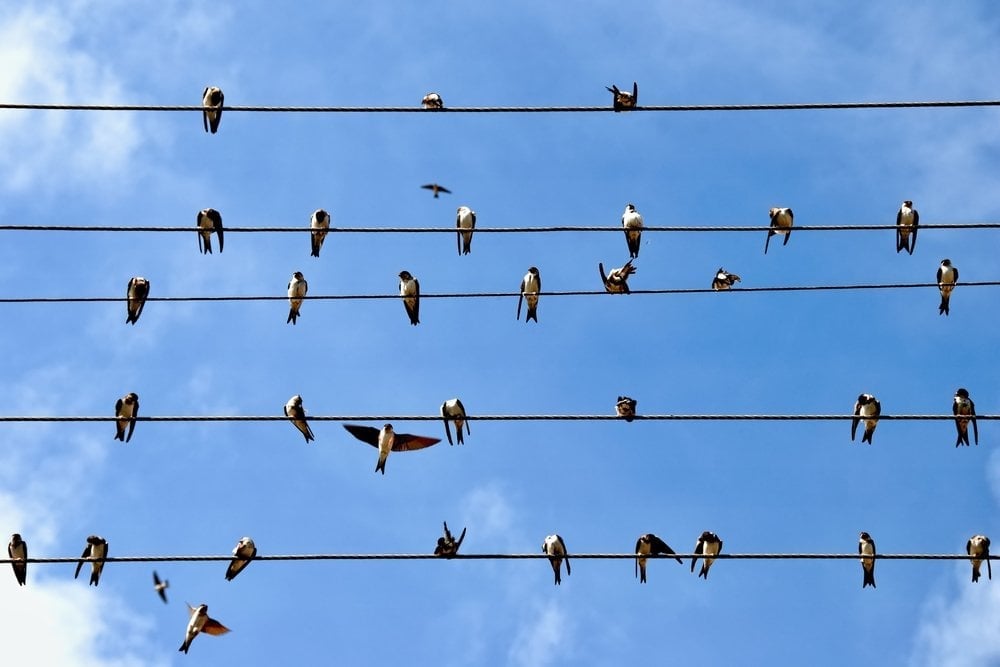 This is the same reason why birds reposing on wires aren’t electrocuted. (Credits: palickam/Shutterstock)

However, we should not completely discard the voltage, because without voltage or potential difference there would be no current at all. Therefore, hanging on a wire would not electrocute you unless you touch the ground. Hanging from the wire forms an equipotential with the wire, whereas touching the ground immediately creates a potential difference, which draws a huge current through the victim.

So how much electricity is going to kill us?

Electric Shock: How Much Electricity Will Kill You?

A current of 10 mA or 0.01 A is a severe shock, but it would not be fatal. As we approach 100 mA or 0.1 A, muscle contractions set in. It is imperative to realize that due to the low resistance of the heart, a current of only 10 mA is sufficient to kill us.

But the current never reaches the heart, since the resistance of our skin is higher and thus completely absorbs this current. If this meager current were to reach the heart in any way, it would almost certainly be fatal. 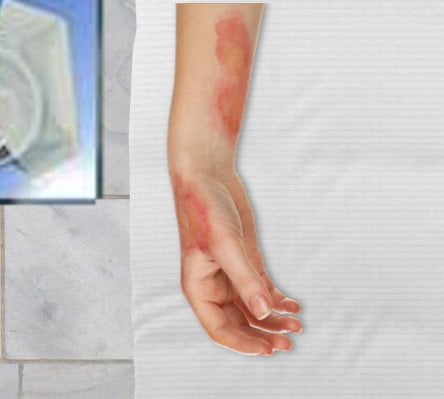 When the current rises above 1000 mA or 1A, muscle contractions increase to such an extent that we cannot release the wire. This tenacity is, ironically, a consequence of muscular paralysis.

At this point, the heart experiences ventricular fibrillation, an uncoordinated, intermittent twitching of the ventricles, which causes ineffective heartbeats that can lead to death unless immediate help is called.

A further increase in the current towards 2000 mA or 2A leads to burns and unconsciousness. Muscle contraction caused by the shock is now so strong that the heart falls into clamps. Exposure to such an amount of current can lead to terrible internal burns, and the clamps can lead to cardiac arrest. Death is possible.

The clamping mechanism, however, is designed to be surprisingly lucrative as it protects the heart from ventricular fibrillation. Chances of survival are slim, but redeemable with immediate medical assistance to the victim. Defibrillators are medical devices used by doctors to save shock-stricken victims.

The effects can be summarized in tabular form as follows: 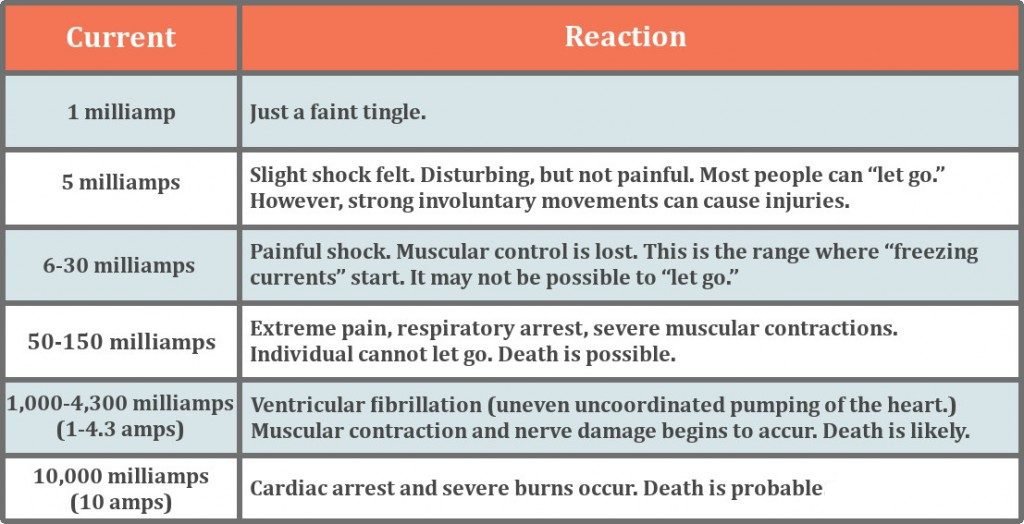 Why Are We Not Insensitive To The Current?

Although a certain voltage is required to allow current to flow, the amount of current flowing into our body depends on how permeable the body is to current or simply its resistance. Resistance to current varies depending on the condition of the skin – whether it is dry or wet. It is estimated at 1000 ohms for wet skin and more than 500,000 ohms for dry skin.

The resistance also varies depending on the point of contact. The internal resistance between the ears is only 100 ohms, while measured from finger to foot it is about 500 ohms. Due to this finite resistance we are not insensitive to current.

Another important factor is time. The extent of the ordeal depends on how long the body is exposed to a certain current. For example, a current of one tenth of an ampere can be fatal for just 2 seconds.

How about answering a few questions about electricity?