There is a subtle difference between a genuine smile resulting from joy and a constructed or “forced” smile for a photograph. It all has to do with the eyes and how our brain goes about making us smile!

We all want to look our best in pictures, and our smiles are a big part of that, but no matter how many times you try to pose or say “cheese”, the resulting smile is somehow not as natural as our real expression of joy (unless you manage a true candid photograph!).

So… why can’t we smile naturally in photographs?

A spontaneous smile vs. a deliberate smile

In 1862, a french neurologist Guillaume Duchenne studied facial expressions and their link to emotions in his work The Mechanism of Human Facial Expression. In this book, he described the basis for what a true smile born of joy looks like. This “authentic” or “spontaneous” smile, also called the Duchenne smile, is a smiling mouth with smiling eyes, as characterized by the crow’s feet wrinkles around the eyes.

There are two major facial muscles responsible for this smile—the zygomatic major, a muscle located in your cheek, and the orbicularis oculi, the muscles around the eyes.

The zygomatic major muscle will pull on the corners of your lip to curve them upwards and the orbicularis oculi muscles will contract, shrinking your eyes and creating the characteristic crow’s feet wrinkles.

When other people encounter this smile, they recognize it as an expression of genuineness; our brains are very good at detecting authentic emotions in facial expressions.

A deliberate smile, the one you conjure for a photograph, doesn’t use all the muscles one would utilize for a natural smile. That’s because the brain creates these two types of smiles in different ways.

Brain circuits for a spontaneous smile and a deliberate smile

To study a smile is no laughing matter, and researchers have found that there are different pathways in the brain for when we smile as a result of genuine and positive emotion (such as happiness) versus when we smile on an external cue.

This type of asymmetry in brain activity is a marker of positive emotions, suggesting that voluntary smiling does not activate brain regions that process emotions, making it a purely motor activity.

However, only a joyful experience, such as winning a game, getting a promotion, or simply hearing a good joke, will create leftward-leading activity in the brain, involving emotional processing in the brain that produces a genuine smile.

However, being told by a photographer to smile in front of a camera will not activate that response! 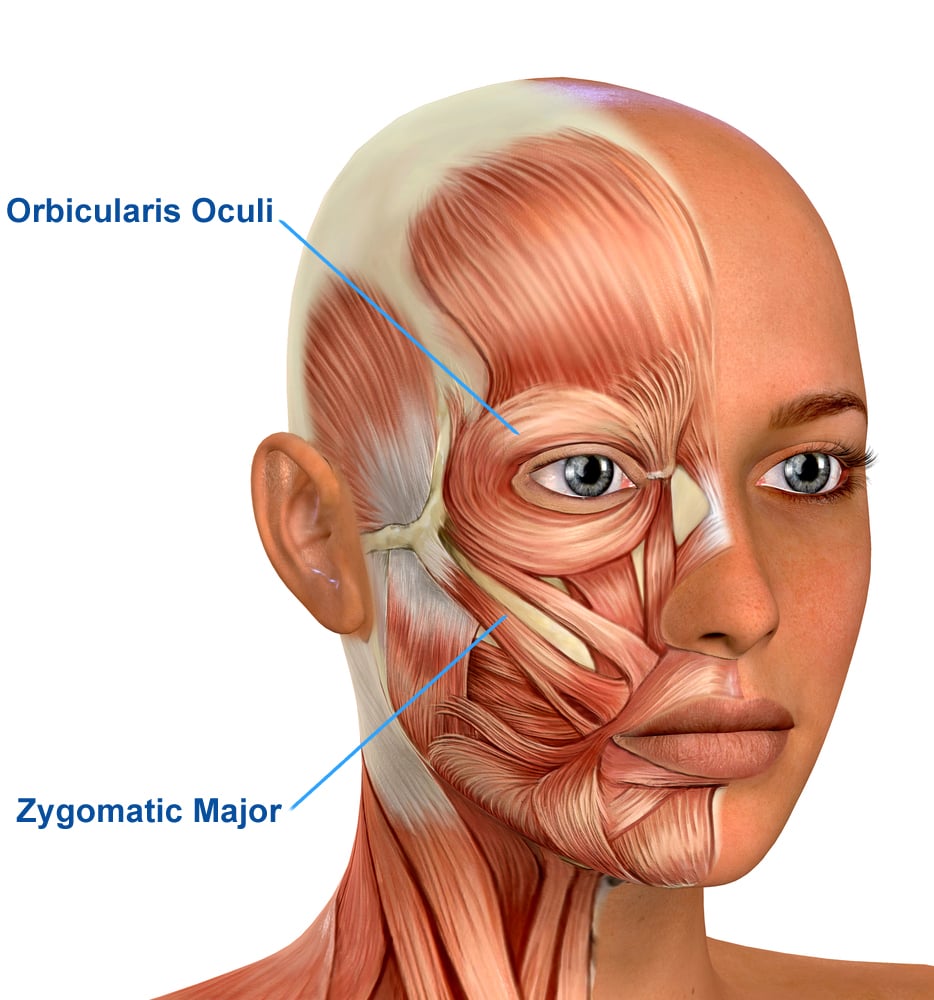 The two muscles of the face involved in smiling (Photo Credit : Derya Draws/Shutterstock)

A voluntary smile will activate a motor pathway that causes those muscles in the face that bring about a smile to contract. You know, or your brain knows, that smiling involves curling the mouth upwards, so those are the muscles the brain activates.

This movement is as deliberate as you consciously moving your finger and hand muscles to strum the guitar. This means that with practice, it can get better.

The Duchenne smile is widely considered the true smile of happiness. Any voluntary or artificial smile would be unable to produce the hallmarks of a true spontaneous smile, especially the crinkling around the eyes. However, that turns out not to be the case. It is possible for some people to mimic a Duchenne smile, either for a photograph or in real life.

You’ve probably seen people do this, including models and actors. They spend hours learning how to control their facial muscles to mimic a variety of emotions; as the myth goes, a seasoned actor can even cry on cue. A convincing attempt at a natural smile? (Photo Credit : stocksnap)

For most of us, this is fantastic news. With a little practice, we could all look radiant and happy in our photographs, even if we’re feeling blue. However, it does raise questions for psychologists and neuroscientists studying the expression of emotion. If the features of a Duchenne smile weren’t a true indicator of joy, what other indicators could we use?

For one, researchers study smiles in real time, as they form. They look at how a smile forms and how much time it takes to form, as well as the intensity of the smile, among other things. Research in that area has thus far found that timing may be a good indicator for what may be a true smile or not.

A true smile was found to last longer after the pleasant stimulus disappeared, while fake smiles disappeared faster. Such discrepancies in displaying emotions could help investigators spot liars and criminals.

The fact that we can imitate Duchenne smiles could give us insight about the function of facial expressions in social situations.

However, you don’t have to worry about that… just get back to practicing your smile in the mirror!

This article was co-written by Dr Sarika Cherodath.