For anyone who has ever taken a wild trip down to Mexico, celebrated a 21st birthday, or embraced their love of exotic alcohol, the strength and potency of tequila is no secret. There are a number of reasons why you always know when you’re taking a shot of tequila. First of all, there is a whole process involved, including licking salt off the back of your hand and biting a lime after downing the shot. It looks (something) like this….

Secondly, tequila is recognizable because of the intense burning sensation that it leaves in your throat! While many people love the invigorating rush of tequila, others can’t stand the thought of that taste!

The important question is…. why does tequila burn so much in the first place?!

Surprisingly enough, the alcohol isn’t the cause!

The Fiery Side of Alcohol

Most people associate tequila with a fiery burn in the throat, but the effect actually happens with all different types of spirits. In fact, the higher the alcohol content, the greater the burning sensation. Even wine can have this effect, although you might not notice it, since most wines are between 10-14%, while spirits range from 35-55%.

The “heat” of alcohol is caused by a few different things, but let’s start with the most dominant part in the process – the VR1 receptors in the throat and mouth. VR1 heat receptors are technically known as transient receptor potential cation channel subfamily V member 1 (TrpV1), and are affected by both capsaicin and ethanol, the primary component of alcohol. These two substances can bind to those receptor sites and cause a response, namely the burning sensation we feel. 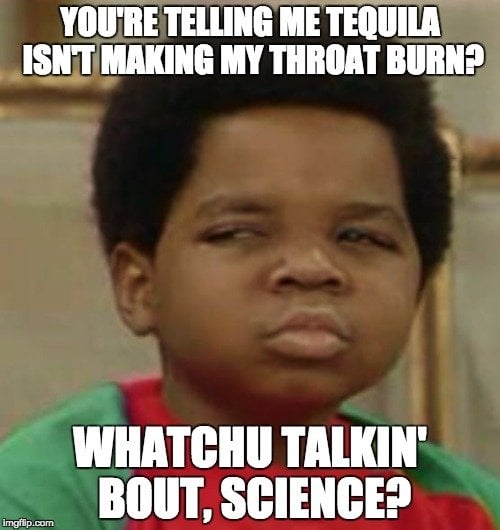 This VR1 receptor has an important function, sensing scalding heat and pain, as a warning system for the body. If you drink hot soup or eat particularly spicy hot sauce, the receptors in your mouth and throat will signal the brain, encouraging you to wait a few minutes on the soup, or drink some water or milk to calm the spiciness. This VR1 receptor has a certain temperature threshold that must be exceeded before the proteins begin to denature, which sends the signal for pain or heat.

More Than Just a Trick

The effect of ethanol on the VR1 receptors isn’t the only factor that makes alcohol burn on the way down. The mucus membrane of the mouth is also quite sensitive to the effects of alcohol, namely its dehydrating qualities. When that mucosa dries up, it can create a burning sensation in the mouth and tongue, causing you to purse your lips, as though you’ve just bit into a lemon. It can also make you crave something to drink to rehydrate your mouth. 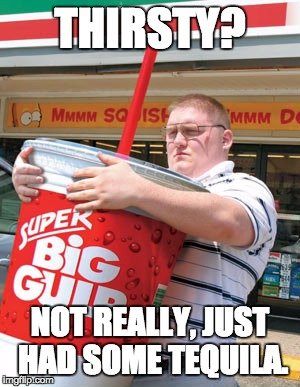 Secondly, alcohol can also cause blood vessels to dilate. After blood vessels dilate, more blood is able to flow through them, causing a warm, rushing sensation in that part of the body. This is why certain alcohols, such as tequila and scotch, can make your gut feel a flush of warmth after downing a shot. However, when excessive amounts of alcohol are consumed, it can cause permanent or long-lasting dilation of the blood vessels, resulting in physical effects, such as spider veins.

Are All Forms of Alcohol Created Equal?

While we know that all forms of alcohol can create some level of “burning” in the mouth, esophagus and stomach, tequila still stands out among them, but not for the reasons you may think. Recent studies on tequila have actually shown that one shot of tequila per day can actually have a number of health benefits!

While slamming back shots of tequila will likely result in a hangover, sipping on high-quality, 100% agave tequila can help with blood-sugar regulation and break down dietary fat faster than other forms of alcohol. This can lead to lower LDL levels in the body, helping to balance overall cholesterol and lessen your risk of atherosclerosis, heart attacks and strokes. This is in addition to relieving inflammation and reducing tension headaches.

Obviously, alcohol should always be consumed in moderation, so doubling the amount you consume will NOT double the beneficial effects. As you probably know, binge-drinking will do far more harm than good.

That being said, if you sincerely enjoy that burning sensation that tequila (or any other alcohol) provides, pace yourself and drink responsibly… you might actually be improving your overall health!