One symptom of rabies is a fear of water. This fear is caused by the patient’s inability to swallow liquids, as the muscles controlling that action may become paralyzed due to the rabies virus.

A rabid dog terrorizes a sleepy town, and the children are ushered inside their homes. Its mouth is open, saliva dripping, teeth bared, muscles tensed and eyes red. Its madness is driving it to bite and tear into anyone that comes near it.

The cause for this behavior is the rabies virus. This small 5 gene, 12 kbp RNA virus causes “insanity” in its victims, all in the effort to enter another host.

Rabies symptoms don’t show up immediately, as there is a window of a month or two called the incubation period. After this, flu-like symptoms appear. There is a tingling sensation near the bite, which can last for a week. The later-stage symptoms are those we commonly associate with rabies—aggression, hyperactivity and hydrophobia. The question is… why and how does the virus do this?

A History Of Rabies

Ancient cultures, like the Greeks and Romans, were well aware of rabies. The Greeks knew it as Lyssa (rage) or hydrophobia (fear of water). The Romans called it rabies, after the Latin word rabere, meaning rage. The Greeks and the Romans didn’t know of any other disease that manifested such madness. 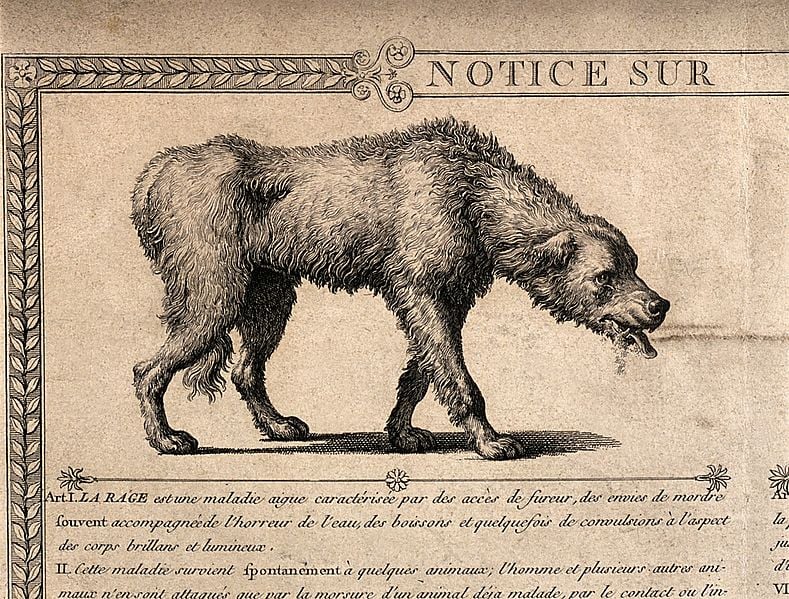 A description of a dog with rabies in an ancient text.  (Photo Credit : Wellcome Images/Wikimedia Commons)

There was no cure or treatment for rabies until Louis Pasteur came onto the scene. Over a series of experiments, Pasteur managed to weaken the virulence of the virus until it was safe enough to function as a vaccine. On July 6th, 1885, Joseph Meister, a 9-year-old boy bitten by a rabid dog, was brought to Pasteur. Since then, getting vaccines for rabies has saved countless lives.

How Does The Rabies Virus Cause Disease?

Like every other virus, rabies uses its host’s cells to make more viruses. It invades the host cells and uses their cellular machinery to replicate. The new viruses break free, tearing the cell open and spreading outwards, infecting more cells.

The symptoms during the initial stages of the disease are flu-like, including fevers, chills and fatigue. By this time, the virus has managed to reach the spinal cord and the brain, at which point it begins to wreak havoc on the brain.

The brain becomes inflamed by encephalitis, as the doctors call it. It infects brain cells, altering the way they work. This affects multiple brain regions, causing the characteristic aggression and rage associated with rabies.

Scientists believe that the rabies virus hijacks certain serotonergic pathways that affect aggression, but the details of this are unclear. The virus also affects certain neurotransmitter receptors called nicotinoid receptors in the brain and muscles, which leads to muscle paralysis. 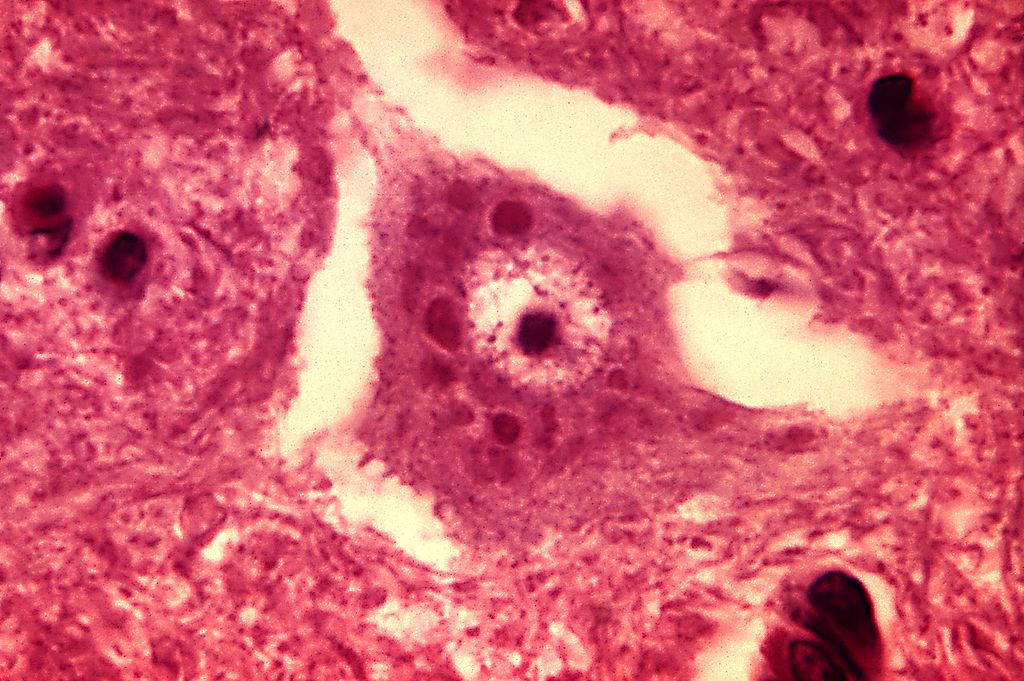 As the patient becomes hyperactive and hydrophobic, they also begin to salivate—a lot.

What does salivation have to do with hydrophobia? Everything.

After reaching the brain, the virus moves to the salivary glands and into the saliva. There they lie in wait to be transmitted to another host. The only problem is getting the saliva-swimming virus into another animal.

The rabies virus is a parasite, so its survival depends on jumping from one host to another. The best way is to either enter directly into a creature’s tissues or to be ingested/inhaled. The rabies virus uses the former method. All of this leads to the introductory scene of the mad dog. The aggression and urge to bite something living is an ingenious form of viral manipulation.

How Does The Rabies Virus Cause A Fear Of Water?

From the virus’ point of view, it is counter-intuitive to swallow. The virus-rich saliva cannot infect another host from inside the first host’s gut. Keeping the mouth flooded with saliva gives the virus the best offensive chances of being passed along. Coupled with aggressive and hyperactive symptoms, the virus will soon end up in another host.

Is There A Cure For The Rabies Virus? 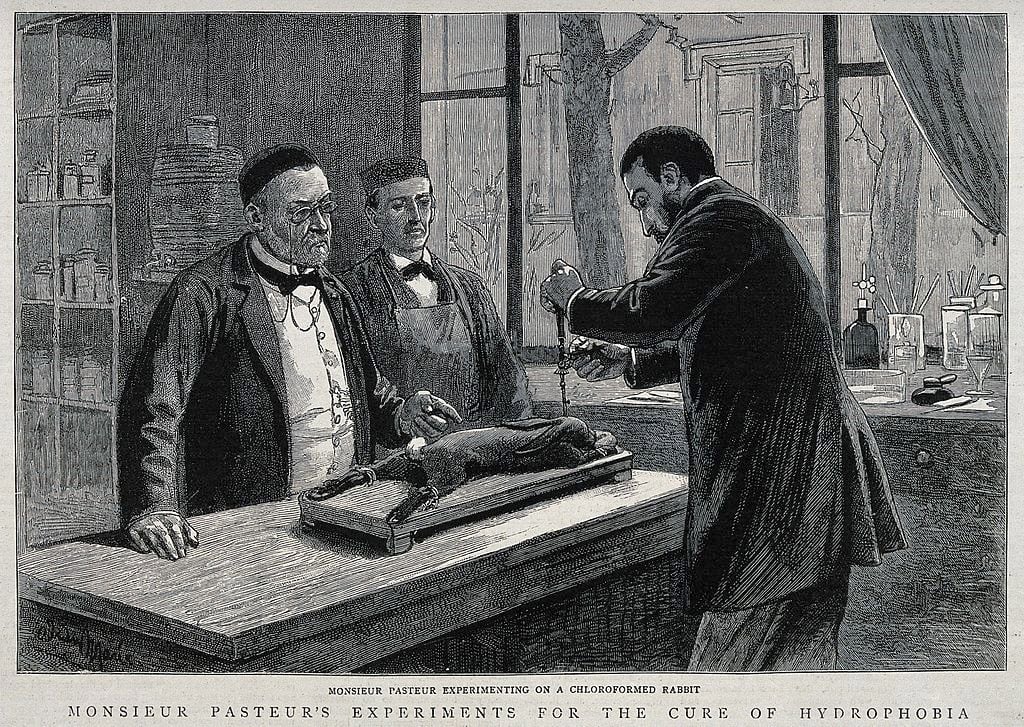 There is a lot we still don’t know about rabies. We know that the virus invades cells and we know that it makes its way to the brain. We also know how the brain looks after an invasion, but the actual “we’ve found the cure” understanding of the disease is still lacking. Which neuronal pathways does it hijack? What proteins does it alter?

A case in 2011 raised even more questions. Rabies was thought to have a 100% mortality rate once the virus reached the brain. In 2011, a high school girl survived rabies without a vaccine. The doctor treating her developed a protocol to try to save her, and it worked! This protocol is now called the Milwaukee protocol, and has reinvigorated curiosity in the treatment and strategy of this disease. Was the treatment truly effective or was she simply infected with a weaker strain of the virus? Such questions don’t have easy answers.