The menses or periods begin in girls between the ages of 11-14. The onset of menstruation is called “menarche” and is a key sign of puberty. Regular menstruation usually stops between 45-55 years of age, beginning a period called “menopause”.

The menstrual cycle does not merely comprise a few days during which women experience bleeding. That duration is just one phase of the whole menstrual cycle. Typically, a menstrual cycle comprises 28 days, but this duration can also vary from woman to woman depending on factors such as genetics, lifestyle, and diet. 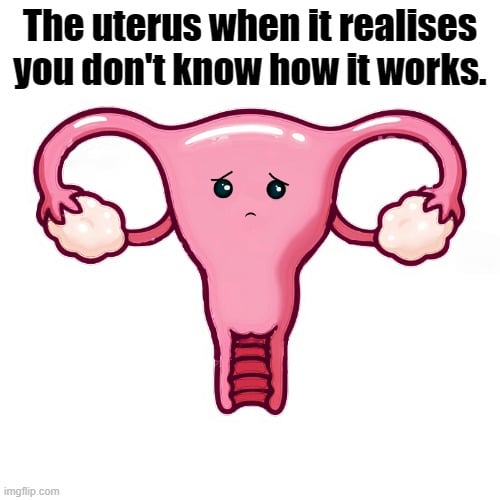 The menstrual cycle primarily involves the uterus and ovaries. The ovaries release an egg into the uterus every month. The uterus is a pear-shaped organ that acts as a cradle for the baby during the nine months it stays inside the mother’s body.

Just as humans sometimes feel “homesick”, the uterus feels “baby-sick”. In fact, the uterus becomes so “baby-sick” that it always prepares itself for a baby… every single month. When it doesn’t receive a baby, it takes down all its preparations, which it throws away. We recognize this releases in the form of menstrual blood. 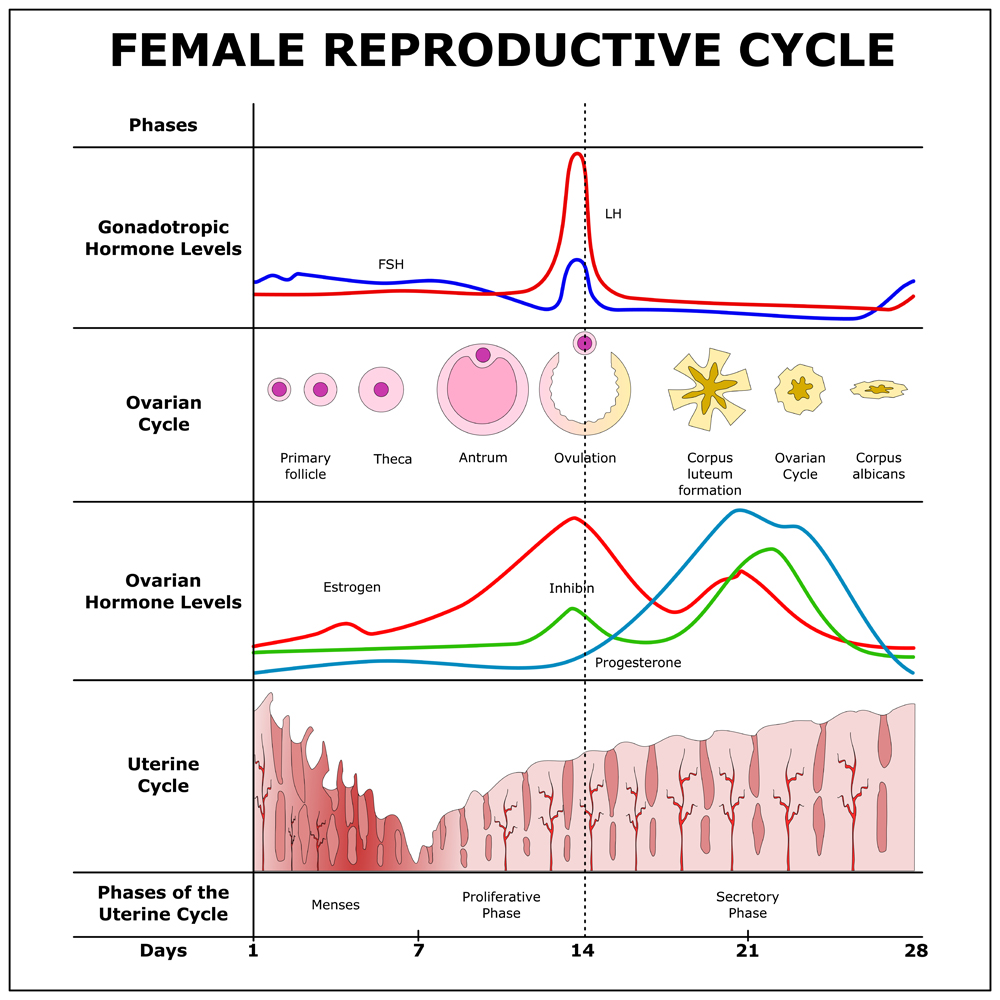 A depiction of hormonal levels during the phases of menstrual cycle. (Photo Credit : ChocoLatePhoto/Shutterstock)

The menstrual phase is usually considered the first phase of the cycle. It is during this phase that menstruation or bleeding occurs.

In preparation for a fetus, the uterus creates a lining called the endometrium composed of lots of soft tissues, cells, and mucus. This lining will provide the required conditions and nutrition for the fertilized egg to grow into a baby over the period of gestation. When it does not receive the baby, it sloughs off its endometrial lining.

Menstrual fluid comprises the removed endometrial tissue, mucus, and blood. It also includes some enzyme secretions and inflammatory exudates. And of course, the unused egg released from the ovary is also included in this menstrual fluid.

All of this is disposed through the vagina to the outside of the body. The vagina is a small canal that leads from the uterus and opens outside the body.

This phase normally lasts between 3-5 days, but can be as short as 2 days for some women or as long as 7 days for others. The amount of blood lost is usually about 30mL, but just like the menstrual cycle duration, the amount also varies from woman to woman. That said, blood loss of more than 80mL is abnormal.

The blood released during this phase isn’t like the blood running in our arteries and veins. This blood is darker in color, thicker in texture, and may also have an odor attached to it.

A common misconception is that menstruation depletes the blood flowing in the circulatory system, but one statistic shows that women on average only lose 60 milliliters (2.7 ounces). 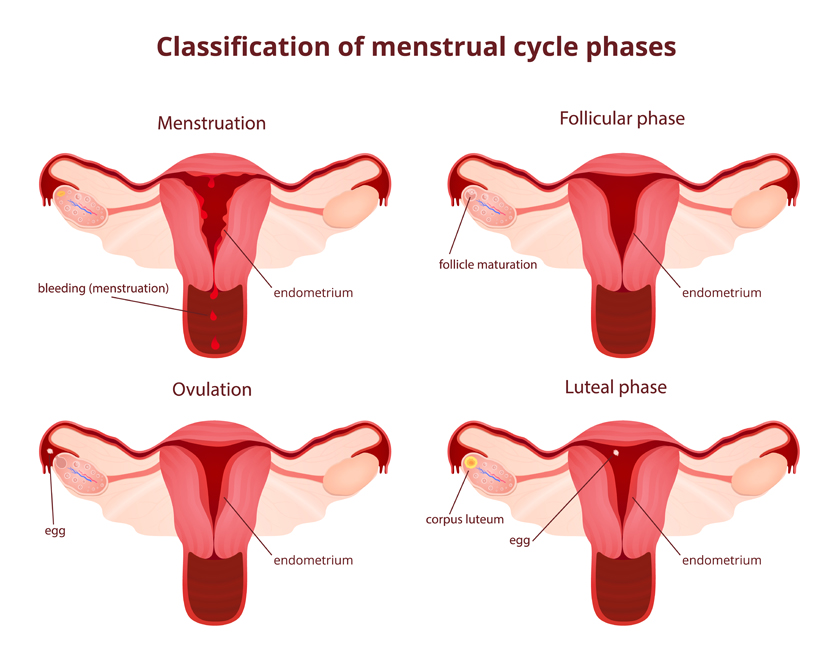 Also, the blood doesn’t just continue dripping incessantly during these few days. It releases at intervals, which is where sanitary pads, tampons, or menstrual cups come to the rescue.

The Follicular or Proliferative Phase

The follicular phase begins on the first day of menstruation. This is why the menstrual phase is sometimes included in this phase.

The follicular phase is also dependent on the follicle-stimulating hormone (FSH). It is under the effect of this hormone that the follicles develop and grow. 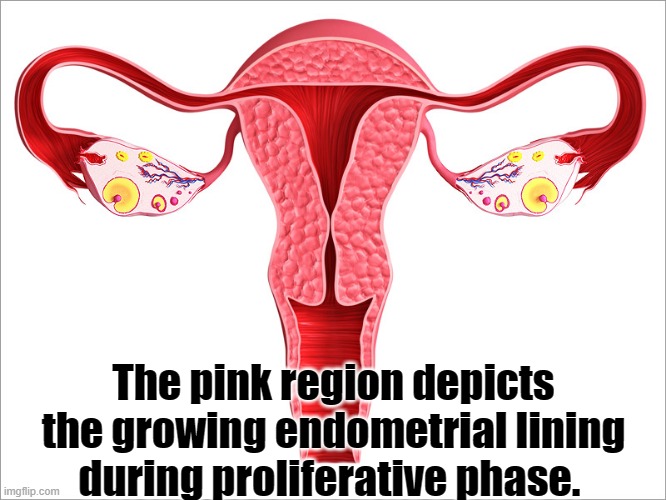 So, these two hormones, estrogen and FSH, continually increase in concentration during the follicular phase.

This is the shortest phase of the menstrual cycle, and lasts between 1-2 days. It more or less begins when the proliferation of the endometrium is complete. This phase is the prime time of the month for conceiving a baby.

A hormone called Luteinising Hormone (LH) is the reason behind the ovulatory phase. Levels of LH and FSH are high, which cause the following changes to occur.

Changes to the cervix and uterus during this phase also make it easier for sperm to survive and travel up to the Fallopian tube, where it could fertilize the egg.

The Luteal or Secretory Phase

This phase is the only phase with a fixed duration of 14 days in almost all women. The phase begins when the ovum has been released by the ovary into the Fallopian tube. The phase derives its name from the “corpus luteum”.

The corpus luteum is simply the leftovers of the Graafian follicle after it has released its egg. The remaining parts of the Graafian follicle then degrade further and transform into a yellow-colored substance. This can be seen in the diagram of the menstrual cycle above. And regarding the name, ‘corpus’ means body and ‘luteum’ means yellow. The Corpus luteum also secretes a hormone called progesterone.

Naturally, right before the menses start, progesterone levels in the body drop. This happens because the corpus luteum—the source of progesterone—deteriorates. After that, the menstrual flow begins, starting the events of the menstrual cycle all over again.

The remaining corpus luteum degrades to corpus albicans and remains in the ovary as a scar or leftover tissue for a few months until the other cells (immune cells of the body) eat it up!