Home
Humans
How Science Shaped The Pantheon Of Rome

What impresses us the most? Well, the list is rather long… surprise parties, diamond jewelry, and Rolex watches, just to name a few. What about buildings? Particularly their design and the way they are built? Have you ever stood in a spectacular building and soaked it all in, wondering how something so stunning could ever be constructed?

Some of the world’s most famous monuments have been  standing strong for the past 4,000 years! Perhaps the most famous and impressive structure in history is the Pantheon of Rome, which was built nearly 2,000 years ago. Whether you’ve visited Rome or not, the Pantheon holds many fascinating secrets that we want to share. 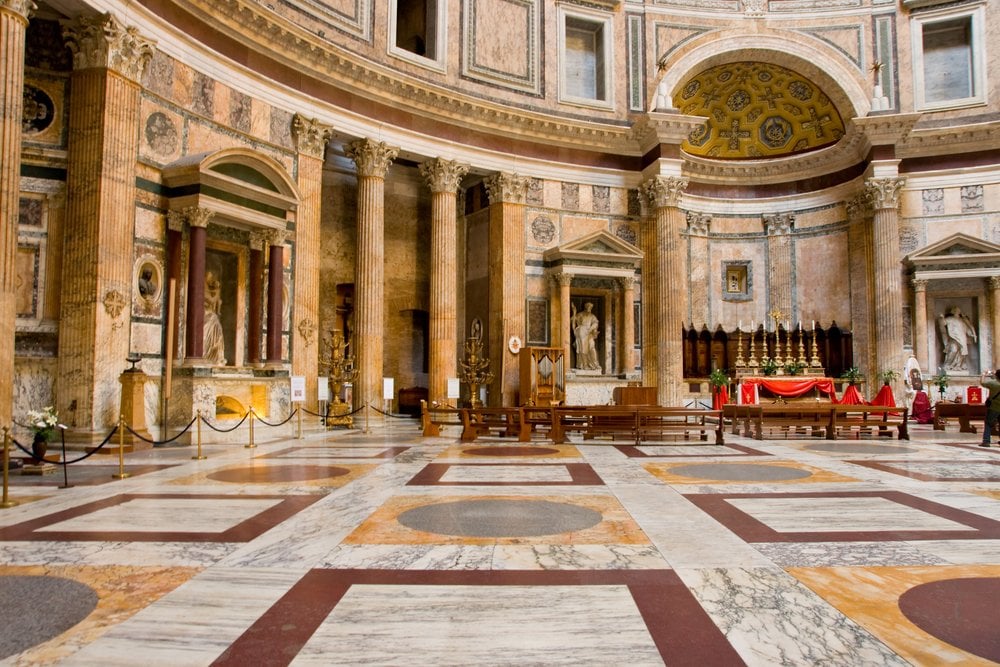 The massive space inside the Pantheon
Credit: byggarn.se/shutershock

Built by  Emperor Hadrian in 120 A.D, the Pantheon is a mesmerizing structure that attracts hundreds of thousands of visitors each and every year.

The Pantheon has a domed roof, but unlike most other buildings with beams or support columns, there is no visible support structure for the huge dome! As soon as you enter the double doors, you see nothing but a vast empty space with walls adorned with statues, as well as graves of past emperors and famous artists of the time.

The word “Pantheon” actually means “To every God”, which may have something to do with the hole in the ceiling.

The dome has a large circular gap in the center called the “oculus” It isn’t covered by glass and is the only source of natural light in the Pantheon. What’s the purpose of this hole? Well, the Romans believed that this opening made them closer to the Gods. The oculus acted as a bridge between heaven and earth, so to speak. 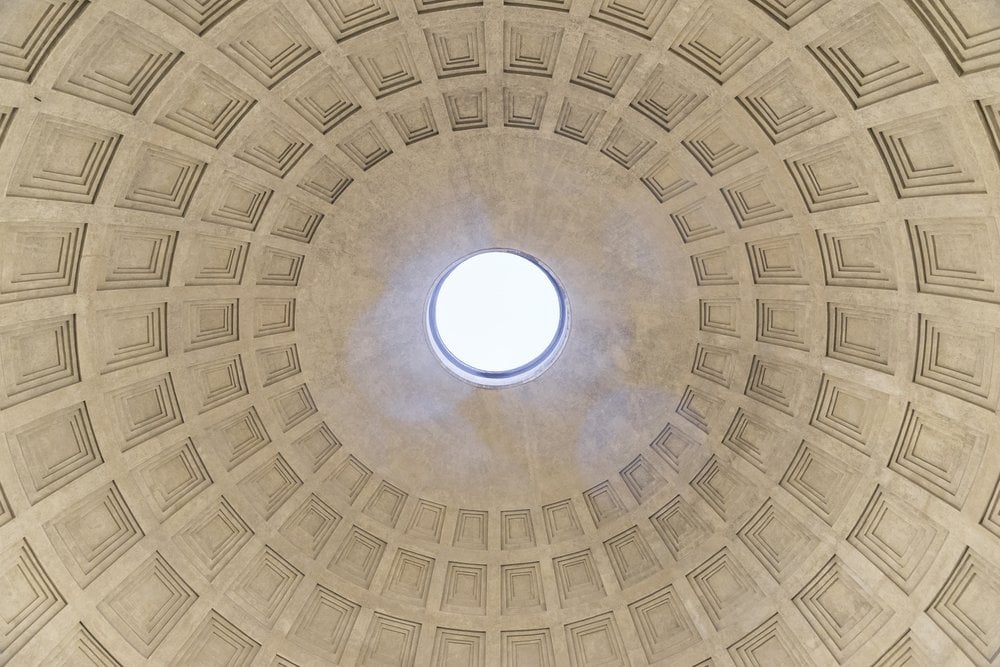 Also, new research suggests that the oculus acts as a sundial. When light enters the hole, it casts a sharp circle of light on the floor and on the walls, which moves as the sun moves. Amazing! 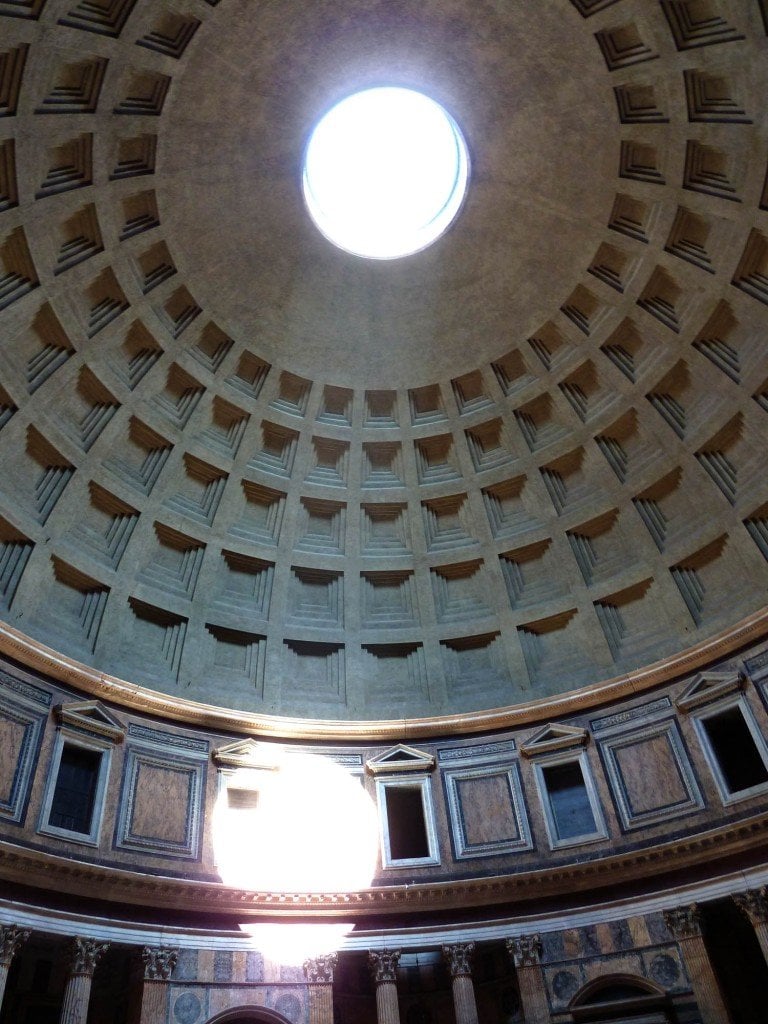 There are some special days where the Pantheon and the oculus put on quite a special show. On April 21st, for example, a light effect can be seen from a metal grill above the doorway around midday that illuminates the outside courtyard. Thousands of years ago, as their Emperor bathed in that golden light on April 21st, those Romans watching him may have felt as if the Gods were shining down on him from heaven.

As it so happens, April 21st was celebrated as the founding day of Rome, so this sort of well-timed design bonus helped to solidify the Emperor’s power and divine grace.

Unlike most ancient structures, the cylindrical hall or drum is designed in such a way that the center of the drum is at an equal distance from both the ceiling and the walls. The drum is large enough to fit a perfect sphere inside of it. The Roman engineers were truly ingenious, particularly since the complex calculations that needed to be made for the Pantheon to stay standing couldn’t be performed by a calculator or tested on some computer simulation program! 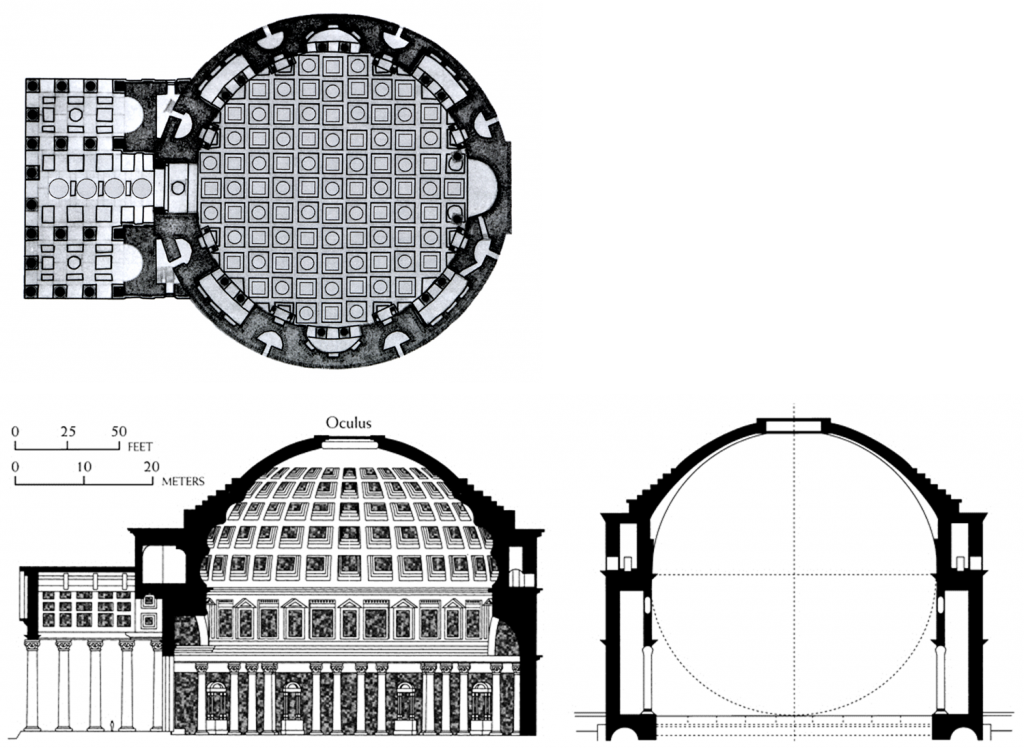 What happens if it rains? Won’t water flood the drum? Not to worry. The floor of the Pantheon is slightly slanted, and there are also holes drilled into the floor and walls that help to drain the drum after any heavy rainfall through the oculus. 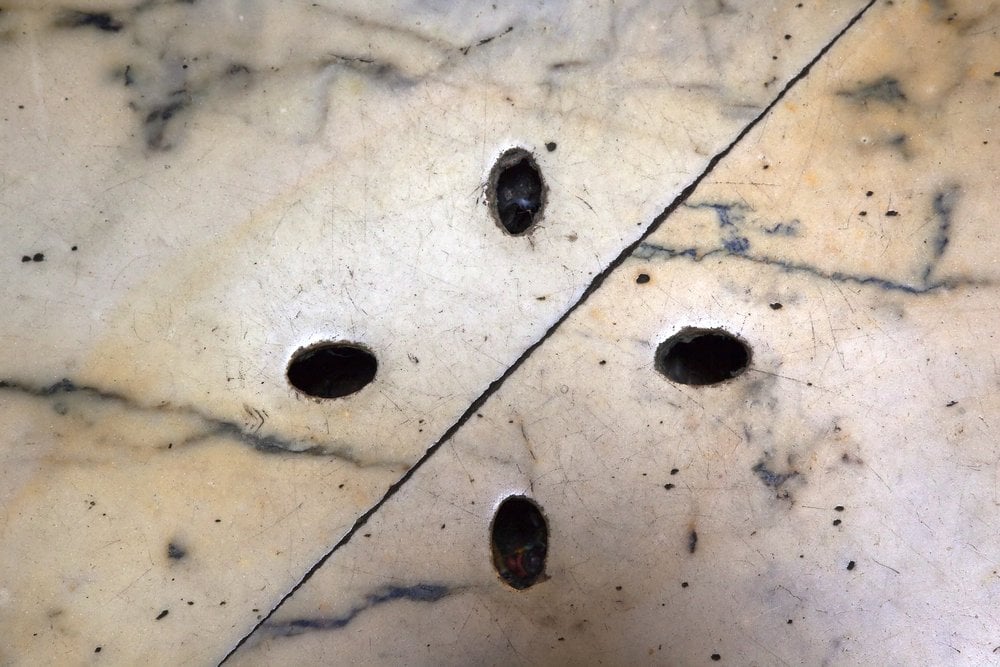 Doesn’t it feel like the top of the dome isn’t in actual contact with the drum? The coffers on the wall create that effect. It almost feels like the dome could rotate! 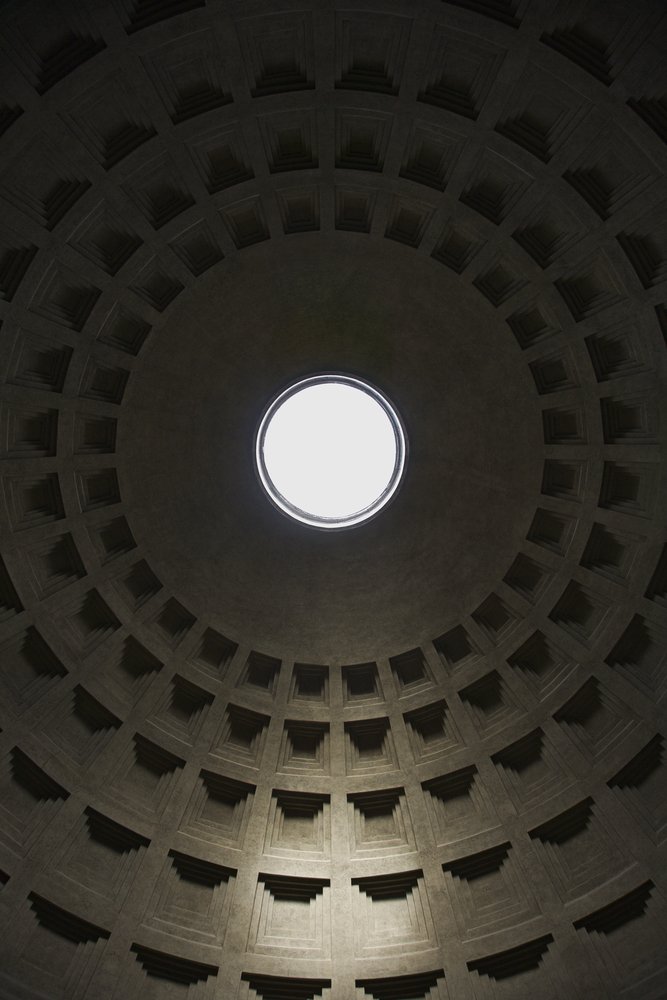 The cement that Romans had was very very weak as compared to the types we use in modern times. The Romans mixed volcanic ash with limestone in the mortar.

However, scientific analysis has shown that the mortar contained clusters of a mineral called stratlingite, which gave the cement impressive durability.  The crystals formed because of the particular mineral mixture and prevented the spread of microscopic cracks from appearing in the completed structure.

Want to know another secret? The dome of the Pantheon looks perfect from the inside, yet looks flattened from the outside! Once again, this isn’t magic, just brilliant Roman engineering, as the picture shows below. 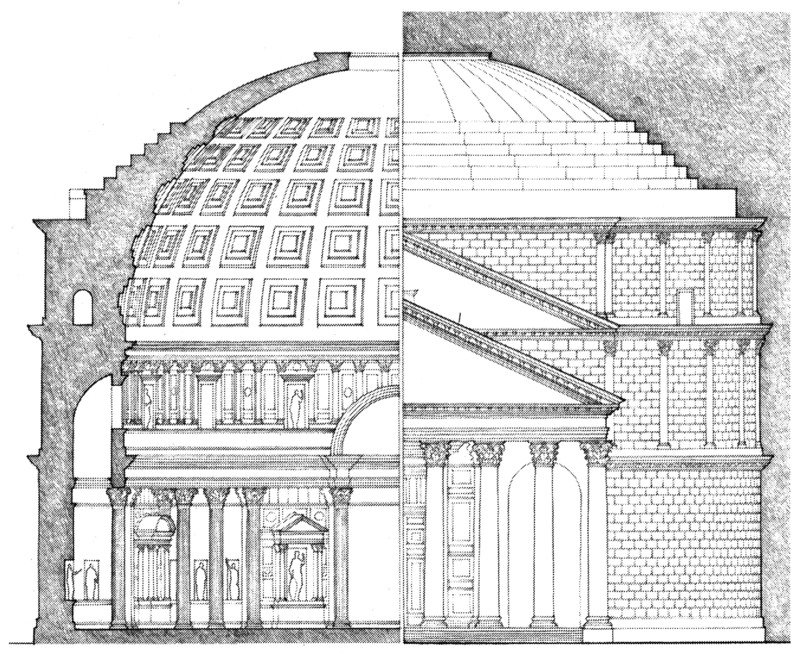 Many structures throughout history have been built based on the inspirational design of the Pantheon, including St. Peter’s Basilica and Palladio la Rotonda in Rome, the George Washington National Gallery, the Guggenheim museum and many others.

The Pantheon is the best preserved monument of the Roman Empire, and its beautiful cap is the largest unreinforced concrete dome in the world!

Now that you know all of this fantastic history, it’s the perfect time to go on a little Roman holiday and witness the wonders of the Pantheon for yourself. Get going!

References
The short URL of the present article is: http://sciabc.us/xpY64
Help us make this article better
Prev Article Next Article
About the Author