Ant-Man can change his size in the MCU. But what do the laws of physics in the real world have to say about that?

The superhero genre pushes us to suspend our disbelief in order to enjoy the science-defying and out-of-this-world moments on the big screen. However, it is still fun to imagine what would happen if those moments that breach the “laws of nature” happened in the real world.

Ant-Man, rider of the great Ant-thony and Ant-thonio, is one such comic character whose actions in the Marvel Universe could give rise to some pretty fascinating outcomes when observed from our reality. Without getting too deep into the scientific accuracies and possibilities, let’s take a look at what would happen if Ant-Man were from our world.

Disclaimer: The following are hypothetical situations based on fundamental laws of science.

Pym particles can expand and shrink things by manipulating the spaces between atoms, without manipulating mass. Let’s assume that this is a fundamental law in the MCU and revisit certain Ant-Man moments in that context.

In the first Ant-Man movie, while training Scott Lang to be the next Ant-Man, Hope van Dyne mentions that a 200-pound man, when shrunk to 1/100 of an inch, can act as a bullet. This happens because the energy packed into a human-sized punch is now squeezed into a very tiny volume.

A very small area is being impacted by a very condensed form of energy, leading to greater damage.

If he goes subatomic, he can probably penetrate the body without even tearing the skin and easily rupture fundamental biomolecules, such as DNA, just like high-energy radioactive rays.

Now, consider that Ant-Man is an isolated system that follows the law of conservation of energy and mass. When he expands with the help of Pym particles, the energy from his punch now gets distributed over a much larger area. Although the punch is coming from the same 200-pound man, the impact would not be as deadly as a punch from an ant-sized Ant-Man.

We also know that denser materials have a higher strength. A 100 kg cinder block that hits something can cause some serious damage, but the same cannot be said if the same 100 kg is in the form of a giant balloon figure. Similarly, as Ant-Man expands into a giant, the density of matter in his body decreases dramatically, thereby reducing his strength. So, if you saw a huge angry Ant-Man charging towards you, don’t worry… he can’t hurl a bus at you or break the wings off an airplane.

An instance that completely ignores the “not messing with the mass” law takes place in Ant-Man and the Wasp. Dr. Pym shrinks down an entire building that contains his lab into a rollable structure that was then moved around in a van. Let’s assume that the building and van are made of a super-strong material that came out of Pym’s lab, but the roads and the surroundings are made up of normal construction materials, right?

All of us are familiar with the feeling of a slight tremor in the ground when a very heavy vehicle passes by; this is known as traffic-induced vibrations. Now, imagine the same feeling, but for a van carrying a 10-story building that weighs tens of thousands of tons over normal roads. This could easily give rise to local seismic activity.

Also, dragging such highly dense matter in a van where the entire mass is supported by only four tires would crumble every part of the road it touched beneath its weight. In other words, there wouldn’t be any sneaking around and hiding from the FBI.

Also Read: Can You Shrink And Grow Like Ant-Man Without Any Real Consequences? 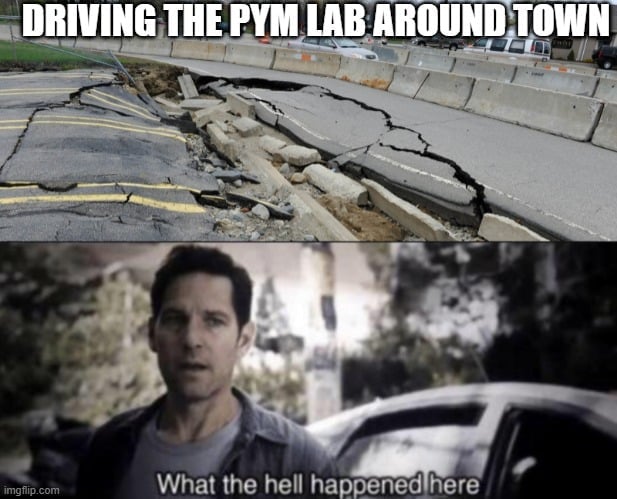 Now, let’s consider (again) that the Pym particles can somehow safely remove and add mass to Ant-Man’s body as he shrinks and grows, without deforming the biological molecules. This is against the Pym particle laws of the MCU, but it’s the only plausible explanation for him being able to kick a bus with his leg and fling half a plane at Iron Man.

If his weight increases with his size, then the square-cube law might create some major problems for Mr. Lang. In Ant-Man and the Wasp, Scott Lang brags that the tallest he has ever been was 65 feet. If we consider him to be a 6-foot-tall man, then his giant version was approximately 10 times bigger than his actual size.

As a result, his total surface area increased by 100 times. This would give him 100 times more strength, as it is commonly believed that there is a direct relationship between the cross-sectional area of a bone or muscle and its strength (scientists are still working on this).

The surface area plays in Ant-Man’s favor, but the volume throws a curveball. As his body grows 10-fold in size, the volume increases by 1000-fold, as does his weight (as established earlier). He might be 100 times stronger, but also 1000 times heavier. His bones would no longer be able to hold his body straight and would turn into powder, being crushed under the weight of his colossally heavy body, turning him into a giant living blob. Ant-Man uses the red Pym particles to shrink to a subatomic size and enter the quantum realm. The only way he can stay alive is if the oxygen he breathes and the DNA that makes him a living being also “go quantum” with him, which is physically impossible (you can read about why here).

By some twist of fate, if he becomes a subatomic particle, these are the things that could happen to him.

Clearly, while the concept of Ant-Man is more than enough to thrill fans and power a franchise, many of the physical feats executed by this size-shifting superhero are simply beyond the realm of our reality!