Blood groups are antigens on the surface of the blood cell. They were discovered by Karl Landsteiner, who discovered the ABO blood group system in 1901, and Rh in 1940.

Famous among the blood types are the A, B, and O types, as well as the Rhesus blood type (negative and positive). Most of us find out what blood group we have either out of curiosity, routine medical check-ups, or through blood donations. However, it seems a bit counterintuitive that humans (and other animals) have minute differences between our blood. What advantage is there in having a different blood group from that of any other Homo sapiens? Additionally, why must our bodies be so hostile to blood groups that don’t match ours?

A History of Blood Types

Humans discovered the existence of blood groups after years of tumultuous scientific journeys. As with all journeys, this one started with a Greek Physician (in the Roman Empire) named Galen. He proposed that blood was made from the food we ate, along with the liver.

This was a good guess for a time with no microscopes, but it was through William Harvey (many centuries later) that blood really began to gain popularity. In 1619, he correctly proposed in his monograph ‘Excertatio Anatomica de Motu Cordis et Sanguinis in Animalia’ (The Anatomical Exercises concerning the Motion of the Heart and Blood in Animals) that blood flows through the body like water flows through the plumbing system in cities—in closed pipes, or vessels.

This revelation led to a flurry of scientists performing experiments on human blood. A particularly popular subject was to study the transfer of blood from one body to another—transfusion. 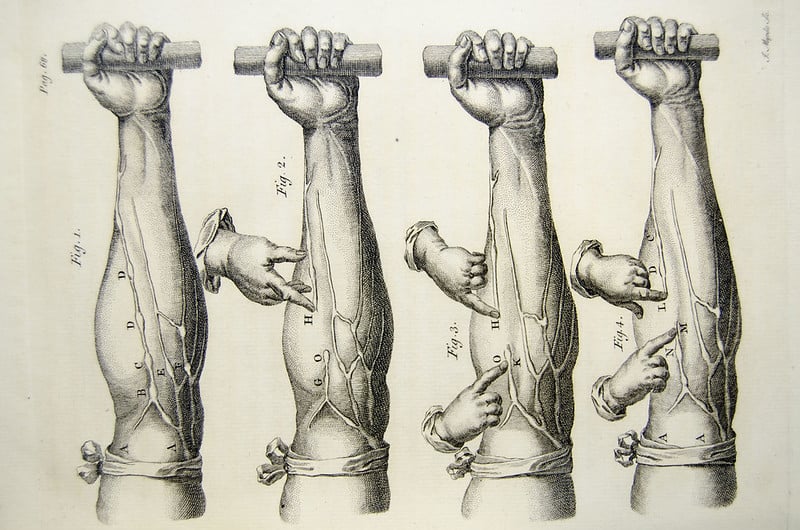 Figure from William Harvey’s The Anatomical Exercises concerning the Motion of the Heart and Blood in Animals. It shows the one-way action of valves in veins. (Photo Credit : Flickr)

Two scientists during the mid-17th century learned the hard way that not all blood is equal. In Britain, physician Richard Lower performed dog-to-dog blood transfusions, and later progressed to transfusing the blood of lambs into humans. Meanwhile, in France, Jean-Baptiste Denis, a member of King Louis XIV’s court, was performing similar transfusions.

Through these experiments, Denis was the first to describe the hemolytic transfusion reaction (to be explained later) that takes place when incompatible blood is mixed. However, the deaths being caused by this line of scientific inquiry were distasteful to the French government at the time, so Monsieur Denis was arrested and France went on to ban performing blood transfusions.

The British government would follow suit soon after, which halted any study into the mysterious nature of blood for another 150 years.

Karl Landsteiner, The discoverer of ABO and Rh factor

Slowly but surely, blood types came back into focus and their mysteries were further unravelled in the early 20th century. The credit for this largely goes to Karl Landsteiner. In 1901, Landsteiner uncovered the ABO system of blood groups.

Landsteiner carried out experiments using six samples of blood, 5 from his colleagues that worked in the same building as he did, along with his own blood. He cross-tested the sera (the clear liquid of blood without the blood cells in it) and the red cells of the blood donors.

He observed that the RBCs did not react with their own serum, but when exposing the serum of one donor with another donor’s RBCs, he noticed that agglutination (the clumping of RBCs) occurred. In this way, he developed the ABO blood group system.

Later, in 1940, Landsteiner and A.S. Weiner discovered another blood group—the Rh system. Rh stands for rhesus, which comes from the name of the monkey in which they discovered this blood group. For these seminal discoveries in the study of blood groups, he went on to win the Nobel Prize.

What Are Blood Groups?

Before we proceed any further, what exactly does A, B, O, and Rh-negative/positive mean in terms of what happens in the body? They are molecules that are on or dangling from the surface of a cell, in this case, the RBCs. Biochemists call the molecules responsible for the ABO blood groups glycoproteins – glyco relating to sugars (carbohydrates) attached to a protein molecule. The immune system recognizes these molecules, so they are called antigens (the A antigen, B antigen, and O antigen).

Everyone has the enzymes that help make the O antigen, but, if you have the A antigen, you have an extra enzyme that adds an N-acetylgalactoseamine (N-acetylgalactoseaminyl transferase) to the end of the sugar chain. In the B antigen, it’s a galactose, whereas ABs have both enzymes and thus have chains with either galactose or NAG.

The Rh factor depends on the presence of the Rh antigen, which is a protein in the cell membrane. Despite what most people think, the Rh factor is not a single factor. The factor that Landsteiner and Weiner discovered was the RhD antigen. Subsequently, more Rh factors were discovered, but the RhD antigen causes the most severe immune reaction and is the one we denote as positive or negative. 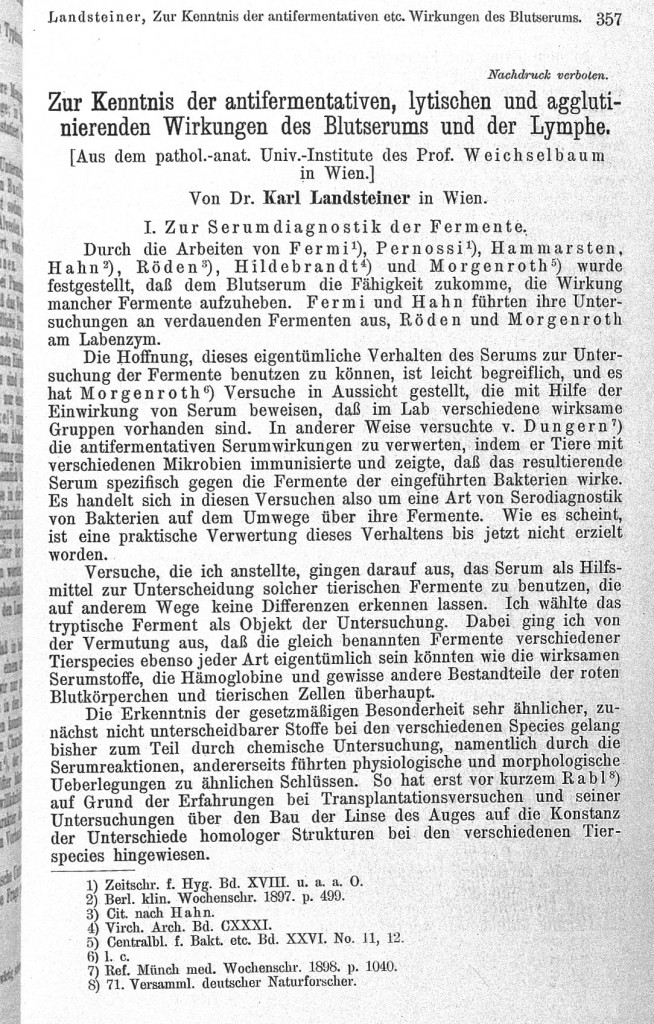 Our immune system recognizes its own blood group and knows not to wage war against it. When a blood antigen is present that your immune system does not recognize as “self”, it causes an immune response. This response can be extremely serious, causing internal blood clotting, kidney failure, shock (not in the emotional sense) and even death.

Contrary to popular belief, our body does not make specific antibodies for non-self antigens. The anti-A (or anti-B) antibodies develop through exposure to similar oligosaccharide chains expressed on the membrane of microbes, on the pollen of plants, bread, etc.

Therefore, when one is exposed to blood that is incompatible with their own, only a few immune cells have antibodies that can target the foreign blood. Upon exposure, the cells proliferate and create more antibodies targeting the antigen. Therefore, the immune reaction of first-time exposure to incompatible blood is not as severe as the second time.

That being said, these two blood groups only scratch the surface of the dozens of other blood groups that science has managed to discover so far.

The Kell blood group system contains many antigens that can induce a potent immune response (after ABO and Rh antigens), although such cases are rare. The clinical significance of the Kell blood group is that it can cause severe hemolytic disease in newborns, resulting in severe fetal anemia.

The Duffy antigen, discovered in 1950, is a glycoprotein (a protein with a small carbohydrate chain attached to it) that is expressed on RBCs, epithelial cells of the alveoli of the lungs, in the collecting tubules of the kidneys, and in endothelial cells.

The Duffy antigens, also called the Fy antigens, are a group of 6 antigens, of which the Fya and Fyb are most commonly studied, as they produce a severe immune response. They act as a receptor for chemokines, as well as for the malaria parasite Plasmodium knowlesi and P. vivax.

In rare cases, there are individuals who lack the presence of the H-antigen in their blood. This ‘Bombay phenotype’ was first observed in Bombay in 1952 by YM Bhende and colleagues. The H-antigen is present on 99.9% of all RBCs in the population, as it is the backbone oligosaccharide chain ending with a fucose sugar, upon which the sugars for the A-antigen or B-antigen are added.

Therefore, its structure is similar to the O-antigen. Since individuals that show the ‘Bombay phenotype’ do not even have an H-antigen, they show the presence of antibodies to the A-antigen, B-antigen, as well as O-antigen. Therefore, when these individuals require blood transfusions, they can only accept blood from a relative or from another individual who lacks the H-antigen.#

The doctor will always confirm your blood group before performing a blood transfusion. The O blood type is called the universal donor because the immune system recognizes it as one of its own, even in another individual. An Rh-negative pregnant woman carrying a child who is Rh-positive could have serious complications. The mother could produce antibodies against the Rh antigen of the child. This leads to the destruction of fetal RBCs, leading to a condition known as erythroblastosis fetalis.

Today, blood groups are a part of our medical identity. We routinely discuss them and they have transcended to define our personal identities. The “B positives” condescendingly tell the rest of us to be more like them (sadly, they don’t realize that a bad sense of humor is an undesirable trait), while the O negatives constantly boast about their altruism!