Essential and irreplaceable organs, such as the eyes and the brain, are subject to a limited amount of preservation from the body’s immune system. This is called their “immune privilege.”

The immune system of the body is the silent superhero of our existence. It shields us from countless foreign particles, the “germs” that we encounter every day. And for those germs that manage to enter the body, the immune system goes into fight mode to eliminate them. The immune system works tirelessly to keep you free of disease.

However, the brain and the eyes actively keep this immune system at bay. With that in mind, how do they remain safe from pathogens? Why don’t our eyes constantly get infected?

The normal immune system and the eye

Our eyes are exposed to a variety of foreign particles every day. Unlike other parts of our body, the eyes are almost constantly exposed to the environment—air filled with dust and bacteria and water swimming with pathogens. Furthermore, how often do you rub your eyes with bacteria-coated fingers. It’s enough to make you sick… right?

The body’s natural response to anything foreign is inflammation and increasing the temperature of that area, but this strategy is bad for the human eye.

The eye is an extension of the brain, and both of these organs are primarily composed of neurons, which have a very limited capability to regenerate. Inflammation of the tissue of the eye will hinder vision, while increased temperature will cause tissue damage. Because the eyes cannot regenerate like other organs, these immune reactions could affect a person’s long-term sight.

What is Immune Privilege?

To protect your vision, the human eye gets “immune privilege,” but what is this exactly? Immune privilege is the privilege or license that the body’s immune system gives to some organs, like the eyes and the brain. It limits the response of the immune system in those immune-privileged organs.

Think of immune privilege as “immunity from the body’s immunity”. 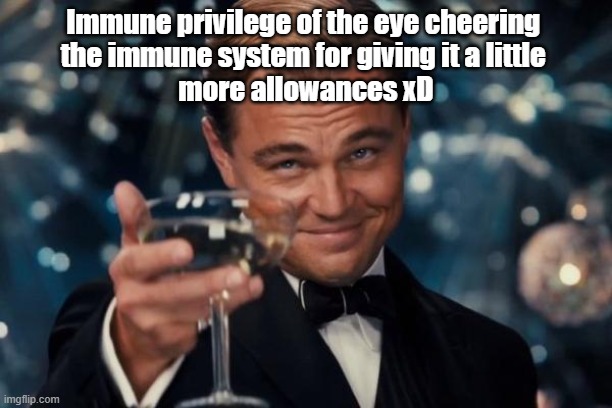 The phenomenon was first discovered by Sir Peter Medawar, who also coined the term. He observed that foreign tissue, when grafted in the eye, was not “rejected” by the body. “Not rejected” here implies that the body’s immune system did not attack the transplanted tissue after identifying it as something foreign. We’ve since discovered other organs that have also immune privilege: the testes, placenta, and fetus.

How does the eye keep the immune system at bay? The blood-eye barrier This barrier acts as a “guard” for the eye. The retina and its blood capillaries form this barrier. The presence of this barrier physically restricts immune cells present in the blood from entering the eye. Lack of direct lymphatic drainage Lymph is a tissue fluid that contains white blood cells (WBCs). The fluid drains into the lymphatic tissue, such as your lymph nodes (tonsils are a lymph node). The eyes, however, are devoid of direct lymphatic drainage. This means that the immune cells do not come in direct contact with the eye, and consequently, do not come into contact with any pathogens. Immunosuppressive molecules Immunosuppressive molecules, as their name implies, are a special type of molecule that limit or suppress the immune response of the body. It’s like the fuse system of our household, which is installed to protect us against our own supply of electricity. Such molecules are abundantly present in the eye, which help in swaying the effect of the body’s immunity away from the eye.

The first two mechanisms initially suggested that the eye becomes ignorant of the presence of foreign antigens. However, the latest research prove that the immune system of the eye does acknowledge the antigen… it simply doesn’t respond as we might expect.

Imagine a white-colored ball floating in a bathtub. If some dye is poured into the surrounding water, it would also color the ball. In the same way, the eye is surrounded by a fluid-like microenvironment that contains soluble immunosuppressive molecules, as mentioned above. Their presence shows its effect on the eye, thus ‘suppressing’ the normal immune response to any foreign particle in the eye. 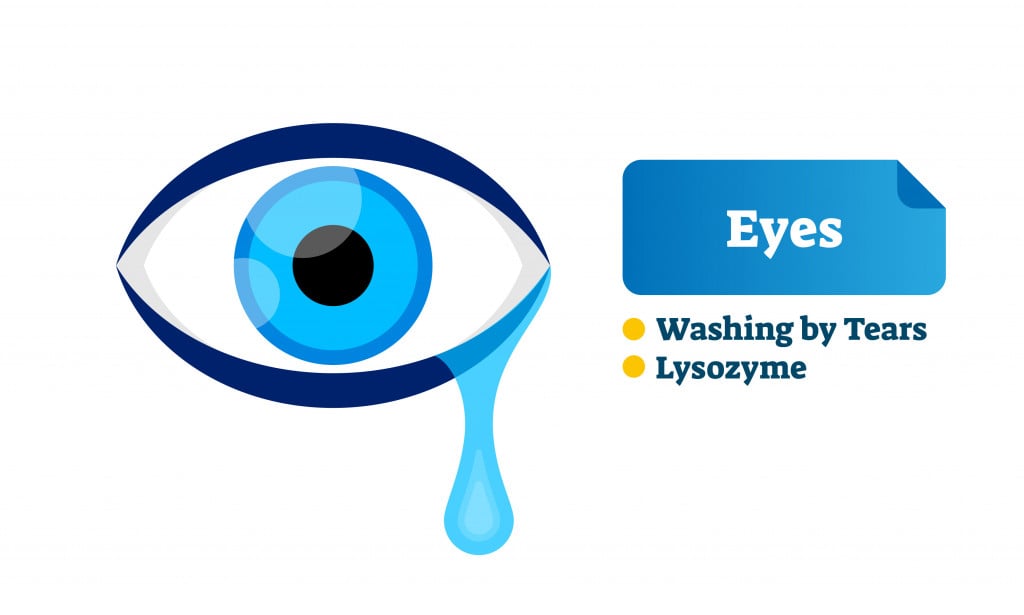 How the eye protects itself against foreign particles. (Credit: DeawSS,VectorMine/Shutterstock)

However, if the eye has a shield against the immune system of the body, how does it protect itself against, for example, a bacterium? That’s where antibacterial substances like lysozyme come into action. Lysozyme is an antibacterial substance that is released from the tear glands of our eyes. This is why your eyes becomes watery right after a dust particle or even an eyelash falls into it.

Sir Peter Medawar’s observation is why transplanting a healthy cornea (the outermost layer of the eye) can now be successfully achieved. Corneal transplants have a rate of being 90% successful without the hassle of tissue matching or taking immunosuppressive therapy.

However, like everything, there’s a downside to this immune privilege of the eye. The immune privilege is easily circumvented when an excessively strong immune response is encountered. This may leave the privileged tissue at risk of collateral damage, as its natural defenses are more easily broken. In normal tissue, the immune system promptly deals with foreign antigens and restores normalcy. but that isn’t always straightforward when it comes to our eyes.

The eye may not have a separate immune system, but it does have a different one!