We are in an age of endless improvement, where people expect everything in their lives to be faster, smarter, stronger, smaller and more efficient. Essentially, comfort and convenience is king, and manufacturers have been more than happy to provide the demanding masses with precisely what they want. However, this constant struggle for improvement seems to have skipped a few key items, such as the beloved microwave.

To be more specific, have you ever noticed how your microwave always makes noise? I have personally never owned a microwave that wasn’t unusually loud. In a world where hybrid cars can move like ninjas, one would think that someone would have put a muzzle on microwaves, but so far, this buzzing, humming, and vibrating appliance hasn’t gotten a makeover. Why is that? Why do microwaves make so much noise? 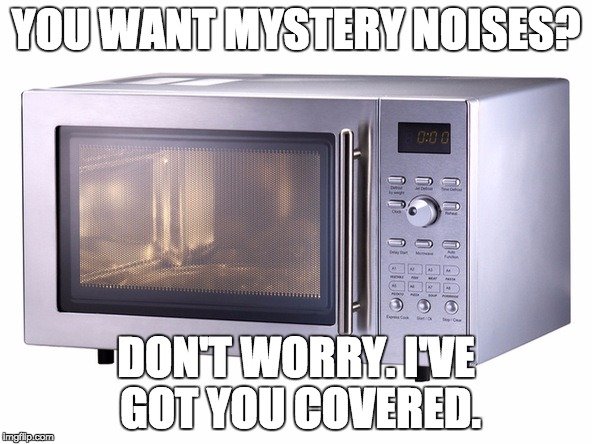 Short Answer: Due to some of the components (e.g, the magnetron and cooling fan) required to cool and power the microwave, noise is almost unavoidable, and while a silent microwave is possible, it would be significantly more expensive to produce.

What Makes A Microwave?

Although the power of microwaves to heat frozen food in mere moments often feels like a tool of the future, you might be surprised to know that the core technology required to run a microwave is actually a piece of the past. A vacuum tube, like the one found in old radios, controls electric current flowing between electrodes in an evacuated space (no oxygen).

Now, the particular vacuum tube found in microwaves is called a magnetron, and is usually located behind the back panel of your microwave. The magnetron is the part of the microwave that actually creates the energy that eventually heats the food. The second main component is called the waveguide, and this is a small divot or angled part of the microwave wall that directs the energy from the magnetron to the food. The final element of every microwave is the chamber itself, which is sealed and insulated in order to trap the microwaves inside. There are also less important aspects, such as the diode, capacitor, transformer, and stirrer (the blade that moves back and forth to evenly distribute the microwaves so your food cooks evenly). Granted, even cooking is not always guaranteed…

Also Read: Why Do We Need A Turntable In Microwaves?

Now, unlike normal ovens or frying pans, which cook our meals by heating the outside of the food, and then waiting for heat transfer to cook the interior of our meals, microwaves allow us to significantly speed up that process. The microwaves produced by the magnetron interact directly with the water molecules present in our food. These water molecules have both a positive and negatively charged end; the microwaves that we are sending out from the magnetron, on the other hand, have electrical and magnetic fields that switch back at forth at incredible speeds. The water molecules will do their best to constantly align with these microwaves as they shoot through the food, directed by the waveguide.

This desire to fit in with the microwaves’ magnetic fields cause the molecules to move very quickly, vibrating and thus increasing in temperature. This cooks the food very quickly, often 10-15x more rapidly than regular cooking on a traditional stove or in an oven. The microwaves are directed at the food to cook it from the waveguide, and are prevented from escaping the cooking chamber thanks to the metal screen embedded in the glass. The wavelength of the microwaves are much larger than the small holes in the screen, meaning that they can’t penetrate and cook your eyeballs as you hungrily gaze at your food as it cooks. 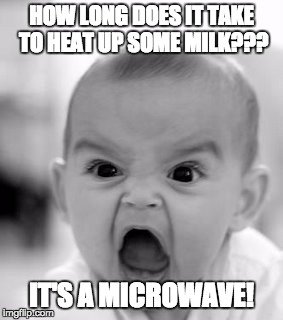 But Why Are They So Loud?

Many people claim that the humming noise of a microwave is caused by the magnetron, but the frequency of the microwaves is far higher than a human being could ever hear. That “blowing” sound that often accompanies a re-heated meal is actually caused by the cooling fan that must continually blow over the magnetron to prevent it from heating up while it produces the microwaves.  The magnetron does make noise in some models, but only if it is not well secured, which causes it to vibrate against the chamber walls where it is stored. Other microwaves also have an exhaust fan that automatically turns on whenever the microwave is being used. This can often be turned off, if the noise is beginning to drive you crazy.

However, the “whooshing” sound isn’t the only noise your favorite appliance makes. There is also a characteristic hum, which is caused by the diode, capacitor and transformer. These three components are responsible for handling the energy from the wall and stepping it up to power the microwave, resulting in that electric “buzz”.

If you hear other noises coming our of your microwave, such as a grinding, whirring, or clanking noise, it is a good sign that your magnetron is failing, the stirrer engine is breaking down, or the turntable motor is getting old. While this usually doesn’t prevent the microwave from working, it will make it less efficient, and the noise will probably only get worse. Most experts say that it is cheaper for you to simply buy a new microwave than repair an old one, since they are relatively inexpensive, and somewhat difficult to fix.

If you are determined to find a completely silent microwave… good luck. The components that do make noise are essential to the functioning of the microwave, and to work around those noise-inducing elements would require a more complex – and more expensive – appliance.

Since microwaves are only used a few minutes every day, and the noise isn’t intolerable, microwave manufacturers assume that customers would rather spend less money and simply deal with the humming, whooshing and buzzing sounds while they wait for their Hot Pockets.