Stars are visible at night, which means, YES, you can see them through an airplane’s window. The reason most people traveling in jets can’t see stars is because the moon lights up the sky well enough to wash out the glow of distant stars. Also, there is often artificial lighting inside the cabin, which makes it even more difficult to see the stars.

We look up at the night sky and see stars up there all the time. Many people, collectively referred to as stargazers, actively do this as a hobby. However, all that stargazing occurs when we’re on the ground. Have you ever tried stargazing from up above, when you’re flying through the sky in a big, metallic tube, a.k.a. an airplane?

If you’re an amateur in the skill of ‘stargazing from an airplane’, chances are that you didn’t see any stars up there.

For what it’s worth, most people can’t see stars from their airplane windows, but what does it mean? Are stars even visible from airplanes in the first place?

Seeing Stars From An Airplane

Looking at the sky from an airplane shouldn’t be that much different from looking at it from the ground, at least in the context of our ability to see distant celestial bodies that are billions of miles away from planet Earth.

The closest star to our planet is, of course, the sun. Despite the fact that it sits approximately 150,000,000 kilometers away, it only takes the light from the sun around 8 minutes to reach Earth. This should give you some idea of how insanely fast light rays travel. After the sun, our second closest neighboring star is Proxima Centauri. The distance between the sun and Proxima Centauri is 4.24 light years. Just so you know, 1 light year is about 9 trillion kilometers or 6 trillion miles.

Since expressing these numbers in kilometers will only consist of numbers with lots of zeroes (which won’t make any ‘practical’ sense), here’s an image that might help you roughly visualize the relative distances that we’re talking about here. 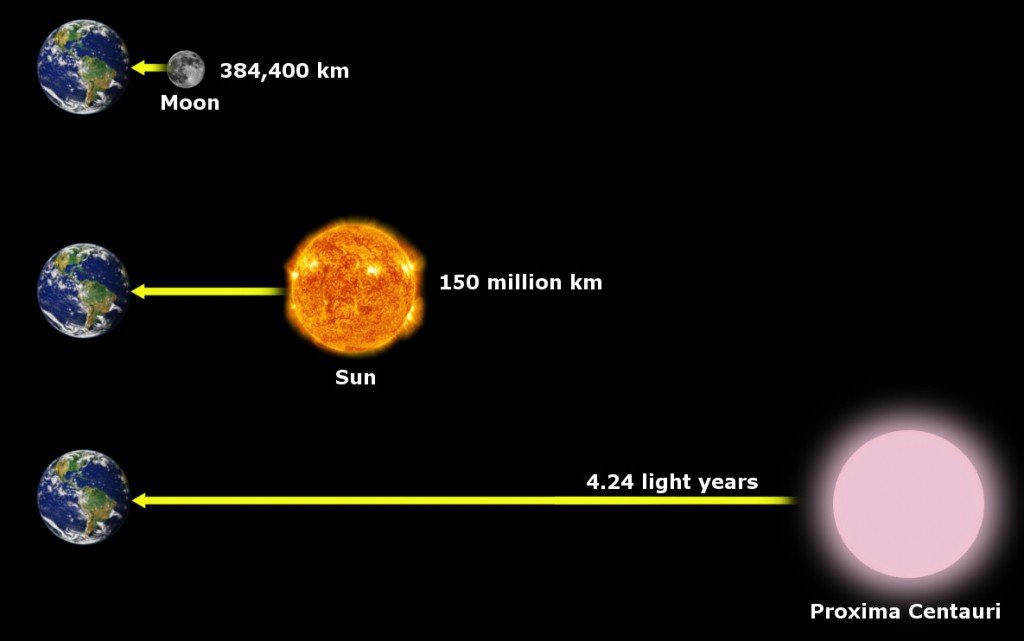 A comparison of distances between our planet and the moon, the sun and Proxima Centauri – the closest star to the sun. Note that the distances and sizes shown in this image are not to scale

All of this is to emphasize the fact that the stars embellishing our night sky are incredibly far away from us. So, regardless of whether you are on the ground or flying a mere 35,000 feet above it, your ability to see those faraway stars remains more or less the same.

You cannot see stars during the daytime from the ground; airplanes are no different in this regard. The reason is the same: during the daytime, the light from the sun is so bright that it washes out the luminance of any other celestial object. Forget about stars that are trillions of kilometers away from us; on most days, we can’t even see the moon, which sits just 384,000 kilometers away from us, and is one of the brightest objects in our sky.

So, trying to see those twinkling stars from an airplane window during the day is an exercise in futility.

Also Read: Are Dead Stars Visible In The Night Sky?

Why Can’t We Stars From An Airplane Window At Night?

One might think that it should be easy to see stars at night – when the sun is not around and the pitch-black skies are in perfect contrast to the shiny, twinkling stars. However, if you subscribe to this line of reasoning, you might be surprised to know that, even at night, starlight must compete with a few other sources of light.

While flying over a metropolitan or densely populated area at night, it’s likely that you won’t see stars from the airplane window. This is because the excessive artificial lighting (i.e., light pollution) of the city can light up the sky above it, making it glow. 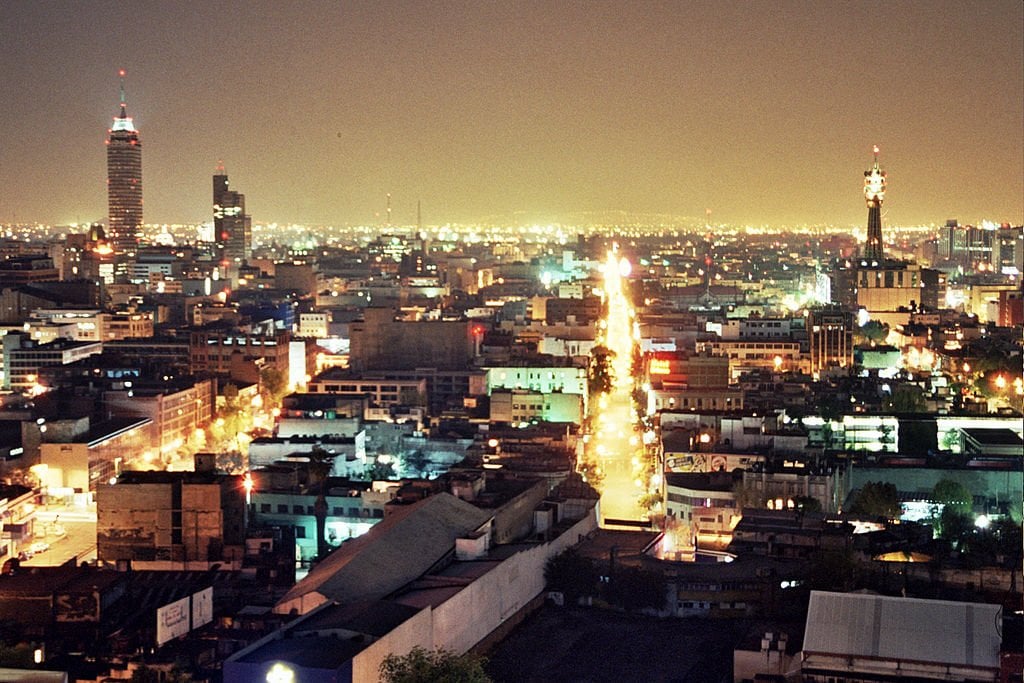 A picture of Mexico city at night; notice how the sky appears so brightly illuminated due to skyglow (Image Source: Wikipedia.org)

Such luminance of the night sky is called skyglow. It is, as you might have guessed, a prominent side effect of light pollution.

Light From The Moon

You will also have a hard time finding stars in the night sky through an airplane window if the full moon is out, because on those days, the moon’s luminance of the night sky is at its peak, which makes it difficult to reach our eyes.

Artificial Lighting In The Cabin 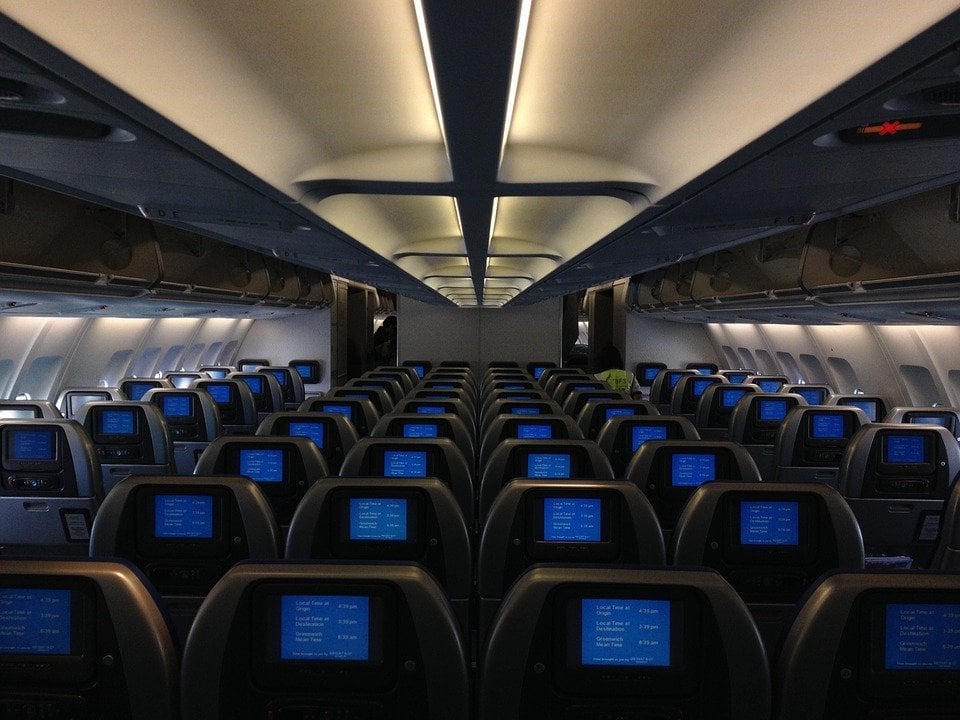 Last but not least, the artificial lights inside the airplane cabin can also make it harder to see stars through the window in the night sky. Your eyes are adjusted to the lighting of the cabin, so it becomes difficult for them to perceive the faint, low-intensity glow of distant stars.

How Can You See Stars In The Night Sky Through An Airplane Window?

Stars CAN be seen through an airplane window at night, if you know how to go about doing it. As you just saw, the factors that make stars so difficult to see from within an airplane cannot be changed. However, what you can do is make your eyes adjust to darkness (or at least minimal lighting) so that they are able to identify the faint glow of stars.

This can be done in a few different ways. Of course, the most effective option is to dim (if not completely shut off) the cabin lights for a few minutes to reduce the brightness levels inside the cabin. However, since that’s not very practical, you have to figure out a way to reduce the ambient light reaching your eyes to the absolute minimum. 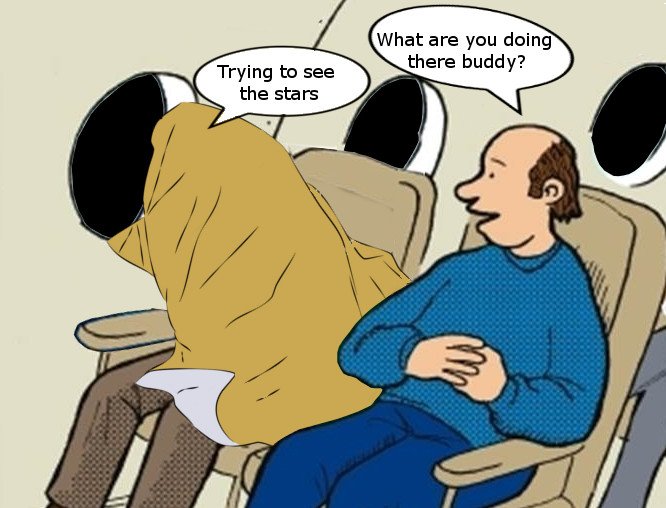 One way of doing this to take a thick piece of clothing (like a blanket) and put it over your head in such a way that the ambient lighting is (almost) completely blocked out.

If you’re lucky with all the other natural/external factors (that you can’t control), then, after a few minutes, when your eyes are adequately adjusted to the darkness, you will be able to see those shiny little celestial bodies glimmering in the night sky. 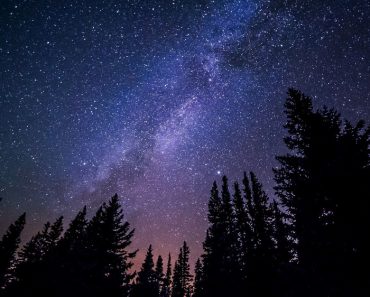