The ability to create speech is thought to be linked to the development of the FOXP2 gene in humans and other close hominid ancestors. Great apes do not have this gene, which is why they are not able to create speech.

Have you ever walked into a pet shop and been greeted with a “Hello!” by a chipper bird in the corner? Or perhaps you know someone who owns a parrot and takes incredible pride in the handful of words and phrases that the bird has seemingly mastered? The ability of certain bird species to mimic human speech is impressive—and surprising, if you’ve never experienced it before.

Humans think of spoken language as one of the greatest differentiators between ourselves and other species; it is arguably our greatest evolutionary advantage, and something that we inherently associated with intelligence and higher learning. While there are other forms of communication in many other organisms, whether that is in the songs of whales, the barks of dogs, the dances of bees, or electrochemical signaling between plants, speech is something that humans alone have mastered. 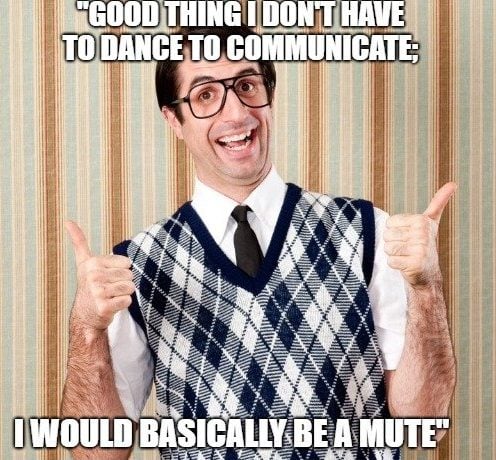 That being said, we don’t often look at parrots as intellectually equivalent to humans—not even close! We do, however, often look at primates as our closest relative and a species that demonstrates impressive cognitive and human-like abilities, including the use of tools, laughter, societal grouping, stress eating, begging for food, and the demonstration of fairness or equality, they do not possess our ability to speak our minds. Does this mean that parrots are the successor to global domination? Or that great apes are not as great as we once thought?

The answer to both of those questions is a firm NO, but there are certain physical and mental variations between primates, parrots and humans that allow or prohibit the use of “speech” as we know it. To begin with, let’s look at parrots and their peculiar ability to mimic human speech.

To begin with, it is important to note that not all parrots are able to mimic human speech; grey parrots, Amazon parrots, parakeets and cockatoos are all able to mimic human speech in some way. Furthermore, some birds aside from parrots can also replicate the sounds of humans, including starlings, lyrebirds, mockingbirds and hill mynas, the last of which some consider to be the best mimic bird in the world. 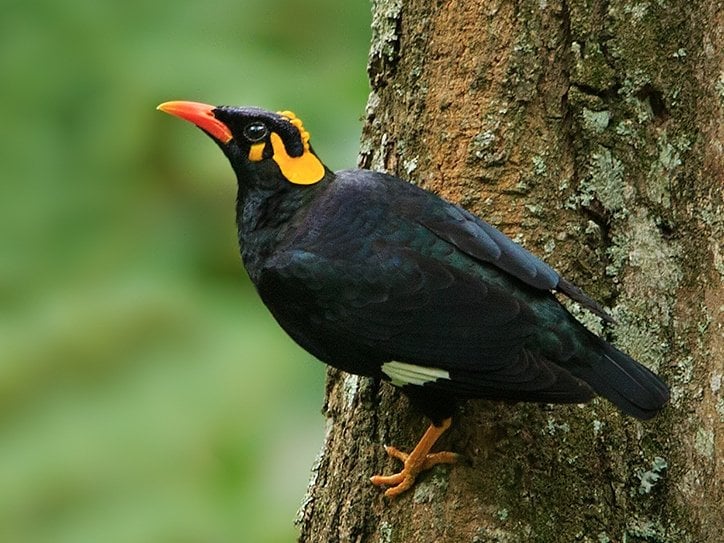 Second, it is important to make a distinction between mimicking and producing human speech. There remains a great deal of debate about the cognitive function behind the words that a bird produces, and whether some element of their speech comes from an understanding of the words and the context, but most experts agree that a bird’s vocabulary is primarily based on hearing and replicating sounds, not comprehension. Even so, there are physical, behavioral and neurological advantages that allow a parrot to speak, both of which we will examine below.

Without being physically capable of creating speech, there is not much reason to speculate on why an animal should or should not be able to create human-like speech. Parrots and many other speech-capable birds, however, do have the physiology to accomplish this feat. While humans have a larynx, also commonly known as the voicebox, birds have a small structure in their chest below their larynx called a syrinx, which serves a similar function. When the parrot attempts to generate speech, their tongue, which is quite dexterous, is able to manipulate their breath into words!

Now, when it comes to parrots versus other songbirds and “talking birds”, parrots actually stand out when it comes to brain structure. All songbirds have certain areas of their brain, called cores, that control vocal learning, but parrots additionally have “shells”, areas of the brain surrounding these vocal centers that also exhibit activity when speech pathways are engaged. Going back 30 million years, to the Kea bird of New Zealand, DNA markers show that gene expression leading to this type of shell activity defines those birds that are able to mimic human speech.

Also Read: Why Is It That Apes Can’t Speak But Humans Can?

Interestingly enough, many of the same genes that code for vocal learning in parrots is also linked to their movement centers, which may give some clue s to why some parrots also bob and duck to music, which often makes it look like they are dancing to the beat!

Not only do parrots have the neurological capacity for vocal learning, and the physiology to execute speech, but they also have the desire to communicate and interact with others. Parrots and other vocal birds tend to be very communal and social with other members of their species, and seek to fit in with their group. When they are around humans and human speech, they tend to make human speech, whereas when they are in the wild, they are typically limited to bird noises. Furthermore, parrots must feel comfortable and trusting of their humans before they begin to speak; repetition of words and phrases, coupled with reinforcement like snacks or treats, will often open up your parrot’s willingness to chat!

Now that we understand why and how parrots are able to talk, let’s turn our attention to primates, specifically great apes, who we call our closest relatives as humans. For generations, experts have explained away their inability by saying that their vocal tracts simply aren’t developed enough; in other words, if their physiology were different, speech would be possible. 150 years ago, when Charles Darwin first published Origin of Species, he had a different view, namely that apes’ brains had not gone through the necessary evolution to reach the power of speech. While that theory was discounted by experts since Darwin’s time, new research shows that he may be correct.

Using X-ray technology, experts have reconstructed the vocal tract of macaque monkeys and other species, and then simulated the physiology in comparison to humans. It was found that the physical structure of the throat should make speech possible, allowing for the production of thousands of different words, yet monkeys remain limited to screeches and hoots. This suggests that speech has been a physical possibility for millions of years in the great apes, but not necessarily a cognitive one. 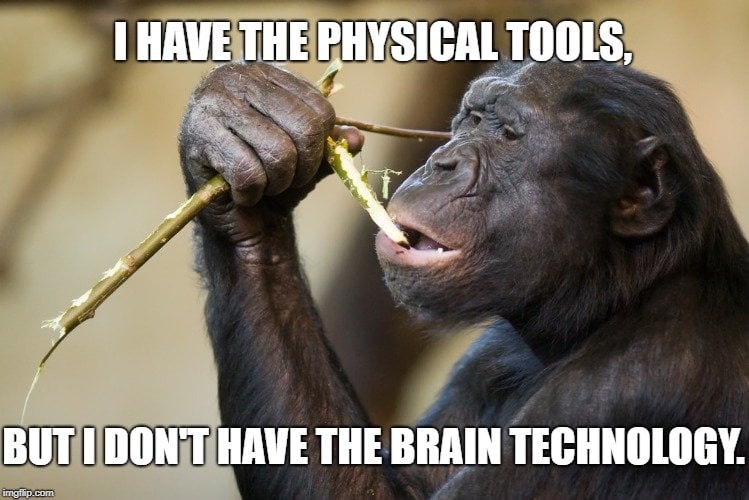 The theory now making its way through the primatology field is that great apes simply lack the neural control to mimic or replicate speech, even if they demonstrate language-like elements in their calls and means of rudimentary communication. Two key brain areas are the cortical association areas, which are linked to higher order brain function in humans, as well as the brainstem nuclei, which are linked to the muscles required for vocal production. When these areas of the brain are larger in the brain, the species of ape or primate tends to have a larger vocal repertoire. If these areas are smaller, or compose a smaller percentage of the brain, the species’ ability to generate unique sounds is diminished. In the great apes, like bonobos (considered our closest cousin), between 40 and 50 different sounds can be made, and their tongues have more fine muscle movement than other, older species of primates, such as gibbons.

Aside from the neural complexity, there also might be a genetic component that prevents apes from formulating speech. The FOXP2 gene has received a great deal of attention in this field, as mutations in the gene can cause difficulties in speech formulation; it is thought that the development of this gene in humans and other close hominid ancestors may be a key step in our ability to speak and create more complex ideas, further separating us from the great apes.

While the debate is still ongoing in the world of primatology about the solid truth on the lack of speech in the great apes, research is drawing ever closer to a conclusive answer. And when it comes to parrots and other mimicking birds, it may be a beautiful skill, but remember that it is essentially a trick. While parrots are quite intelligent, and can learn how to count to ten, and even identify their favorite foods, the vast majority of their language is simply replication and imitation. Conscious, intentioned and nuanced speech is still something exclusively performed by humans and—along with self-awareness—it remains our greatest asset as a species. 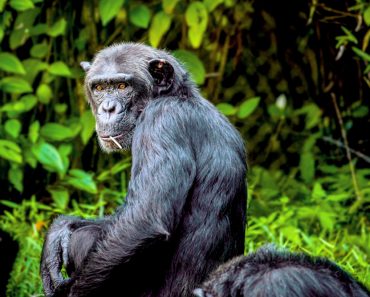