The primary difference between EQ and IQ is that IQ is a measure of cognitive abilities and problem-solving skills while EQ is a measure of emotional intelligence. Emotional intelligence is made up of five facets: self-awareness, self-regulation, empathy, social skills and motivation. While it is possible to improve your IQ, it is believed that EQ is more flexible and can be improved through concerted and conscious efforts at self-improvement.

Self-improvement is a natural desire for human beings, but to improve ourselves, we must first understand our limitations and our potential. For many years, regarding the study of the mind, intelligence was thought to be the most important element that guided our lives. 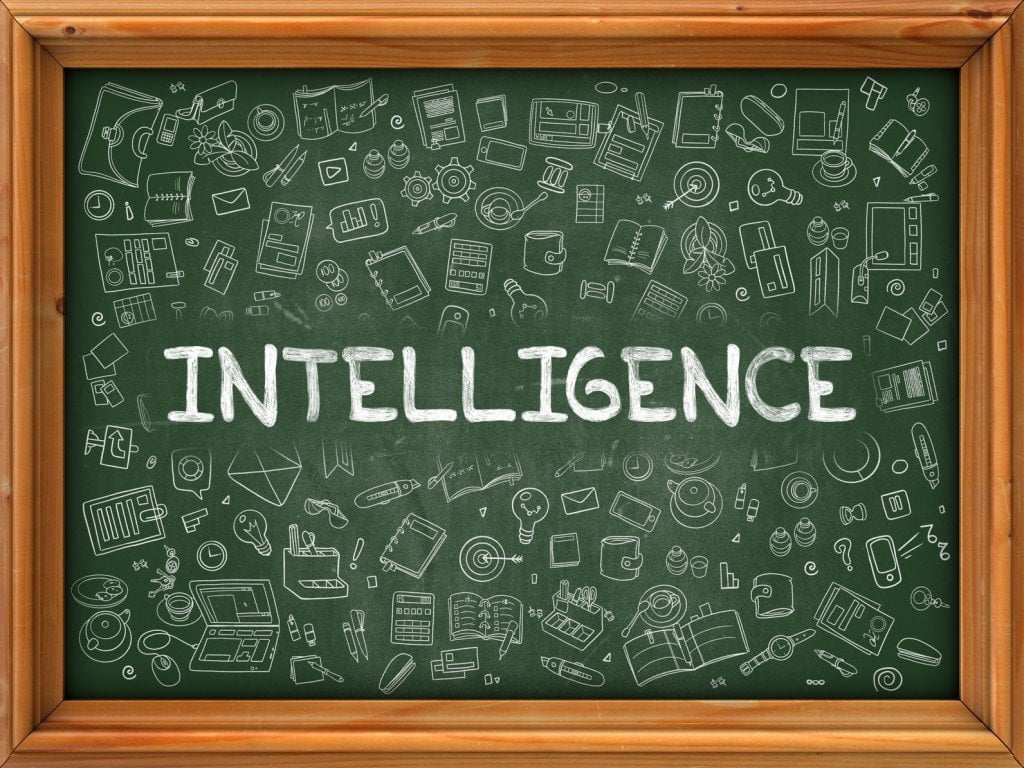 In the beginning of the 20th century, a formal means of measuring intelligence was developed – the IQ (Intelligence Quotient) test. However, in recent years, a new theory has been proposed, focusing on people’s EQ (Emotional Quotient). There is a great deal of debate surrounding the relationship, similarities, differences, and strengths of EQ and IQ, and if we’re ever going to learn what truly makes us tick, we should all understand these two concepts a bit better.

The first intelligence quotient tests were developed in the first few decades of the 20th century, and are the scores generated by various standardized tests designed to assess human intelligence. The unique thing about IQ tests is the standardization of the score based on a ratio of age and performance. Eventually, the belief emerged that IQ measured a person’s fundamental intelligence and would not change throughout a person’s lifetime. This has since been shown to be incorrect (check out this article for the details), but IQ tests became widely trusted and very popular. 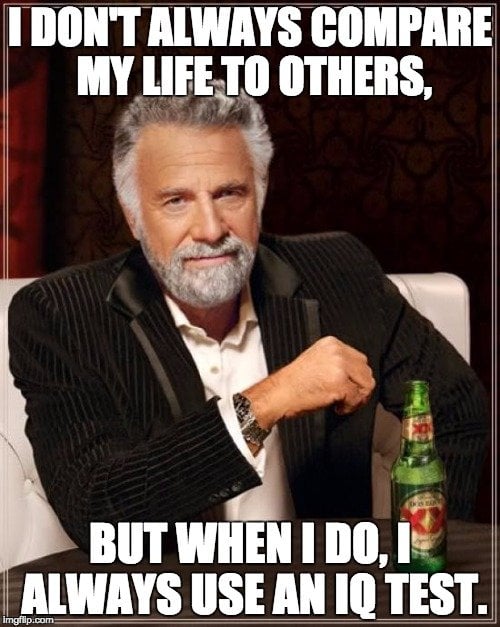 Due to their universal popularity, specific knowledge and facts are included to a very limited degree on IQ tests. Instead, an IQ measures your problem-solving skills, intuition, pattern recognition, reasoning, logic, mathematics, and a number of other fundamental skills that aren’t necessarily determined by what facts you’ve memorized. Essentially, IQ tests measure how someone learns, understands applies information in different settings.

This is critical to everything in our lives, including our careers, our fundamental behaviors, driving a car, reading a book, and everything in between. Clearly, having a higher IQ can help progress your academic and professional career, and perform the necessary tasks of daily life. However, that isn’t the whole story….

While many people have the misconception that EQ and IQ are opposed, they are actually just different. Whereas IQ measures how people learn, understand and apply information, EQ measures how individuals learn, understand, and apply emotional knowledge. More specifically, an EQ (Emotional Quotient) score reflects how well a person can understand their own and other’s emotions, to differentiate between them, and to use that knowledge to guide your actions and behaviors. This emotional intelligence (EI) is extremely important for human beings, namely because we are emotional beings!

Researchers have done extensive studies on EI, particularly since the mid-90s, despite the fact that the term and concept first emerged a decade earlier. After rather exhaustive study, five main areas have been found that define one’s emotional intelligence: self-awareness, self-regulation, empathy, social skills and motivation. If you are able to improve these areas, your EI will increase, as will your EQ. While it has been discovered that IQ can change, opposed to long-standing beliefs, it can be still be difficult to improve our IQ as we age. However, EQ is much more flexible, and can be improved through concerted and conscious efforts at self-improvement. 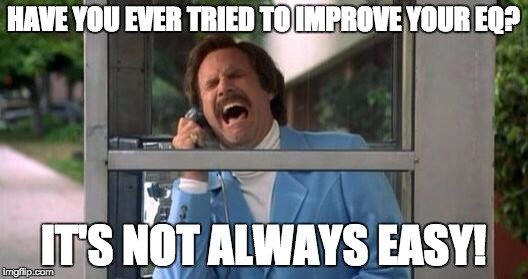 The ability to understand, control, and utilize your emotions is crucial to success in work, relationships, family matters, and personal health (physical and mental). Now, let’s take a slightly closer look at the five facets of EI.

Self-awareness: Argued by many to be the most important aspect of EI, the ability to “know thyself” and honestly appraise strengths, weaknesses, mistakes, and intentions.

Self-Regulation: Understanding your emotions is one thing, but keeping them under control and using rationality to guide your behavior, instead of instinct, is also very important.

Empathy: Recognizing emotional needs in others and effectively supporting them in the way that they require is a key to interpersonal relationships. This is the ability to see other people as humans, full of faults and insecurities, just like you.

Social Skills: Interacting with others in normal, acceptable ways, and engaging them both socially and intellectually, is a great way to create relationships and be a great leader. Doing this with respect and compassion is the sign of high EI.

Motivation: Chasing your dreams, setting long-term goals, and driving yourself forward to success is the sign of someone with high EI. 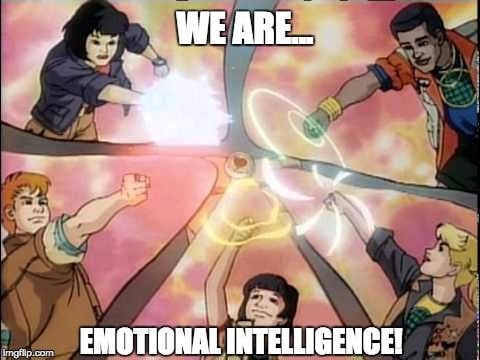 As you can see, these skills are incredibly important for success in every aspect of life, yet they have nothing to do with problem-solving, reasoning, math puzzles, or pattern recognition (in the classic sense of these skills). Obviously, EQ must be considered when analyzing a person’s potential to succeed. So… IQ or EQ? Which one is actually more important?

The short answer… neither is “more” important or “less” important. There are those researchers who suggest that EQ forms the foundation for all of your interactions and impulses, including the learning process, thus affecting your IQ and cognitive development. However, others posit that EQ is overrated and has a limited effect on your overall success in life. Consider it this way, having a high IQ might be a good predictor of a career path or industry, but your EQ score will determine how well you will function in that position (e.g. teamwork, leadership, etc.). 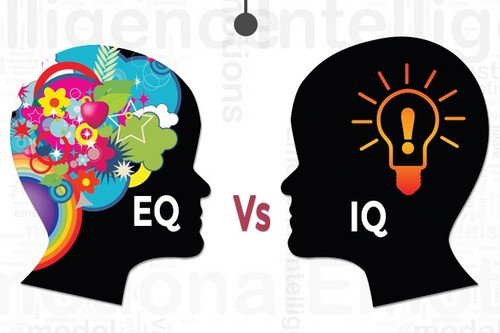 Are they in opposition? (Photo Credit: glitzyworld.com)

In the professional world, EQ has gained a great deal of popularity, and many studies have shown that EQ has a significant impact on job performance, interview skills, first impressions, salesmanship, as well as other aspects of business commonly associated with a rising star in the workplace.

IQ will always have a significant place, because it has proven its reliability for nearly a century. Also, an IQ test is relatively objective, while EQ tests are inherently subjective (e.g., people try to score well, and thus may not be answering honestly). This makes it harder to quantify the value or impact of EQ scores in the general population.

The prevailing theory is that EQ and IQ do not work in opposition to one another, but are instead complementary aspects of an individual that often overlap and work together. 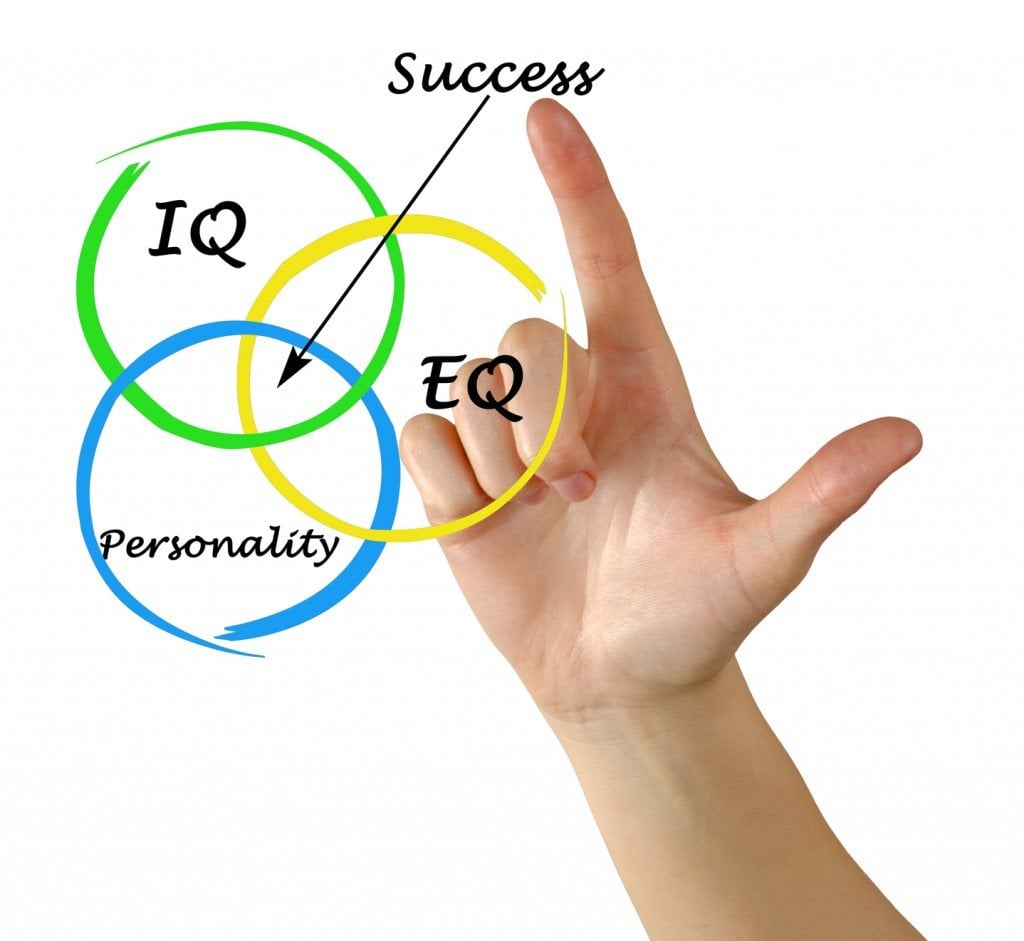 Instead of thinking about EQ and IQ as battling it out in an endless personality duel, recognize the value of both skill sets, improve them whenever possible, and enjoy the benefits that a powerful EQ/IQ combination can bring!