You would be better off running through the rain, since how drenched you get depends ultimately on how much time you spend in the rain.

Imagine yourself taking a pleasant walk down the street on a Sunday morning. You’ve picked the perfect playlist and are totally at peace with your inner self. Out of nowhere, the skies darken. Clouds filled to the brim roll into view. These massively oversized packets of water threaten to burst at any minute. You curse your carefree self for never bothering to check the weather before spontaneous strolls. The walk back home will take at least 15 minutes from where you are.

If you choose to run, that would cut the time in half. Great! So you decide to run, but at that moment, the rain clouds open up and deploy a thunderous shower on your head. You hesitate and take temporary refuge under some scaffolding nearby. What now? You recollect your friend saying that you should walk briskly to avoid getting too drenched, but he’s the same guy who thinks the new Star Wars films are better than the old ones. How much can you really trust him? If you have to make a quick decision on a rainy day, make a run for it! (Photo Credit : KKulikov/Shutterstock)

Those of you who are actually reading this while stuck in a downpour, I’ll give you the short answer—Run! How drenched you get in the rain depends solely on the amount of time you spend in it. By running to your destination, you will spend less time braving the rain’s onslaught, and therefore be less wet by the time you arrive.

If that overly simplistic explanation doesn’t fully convince you, well, read on.

Over the years, a wide variety of experiments and calculations have been conducted, all leading to the same conclusion… in order to get less wet in the rain without an umbrella, one must move as fast as possible. For those still in doubt, let’s begin with a simple experiment.

Imagine that when you were standing under that scaffolding from our original example, planning your journey back home, you had a sponge in the palm of your hand. While walking through the rain, assume that you take about 15 minutes to get home. Your sponge is exposed to the rainwater for 15 minutes. If you run, you can get home in 10 minutes and your sponge therefore faces the rain for only 10 minutes. Which sponge would have absorbed more rainwater? Logically, the one exposed to the rain for longer would have been hit by more water and therefore be the wetter of the two. 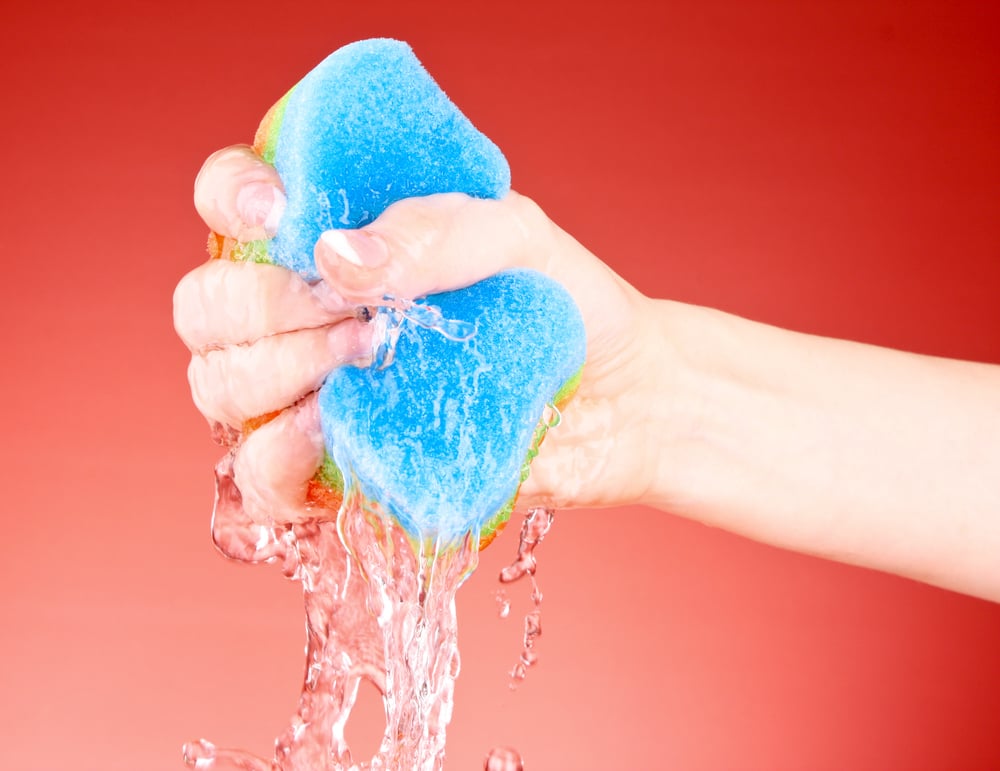 The sponge that’s exposed to water for longer will be wetter (Photo Credit : Africa Studio/Shutterstock)

Nevertheless, some critics have argued that the sponge experiment only considers rain falling in the vertical direction. The rain that hits you from the front, they argue, might lead to a very different result. The rain that hits you from the front covers a lot more surface area than the rain coming down from the top, so how does one account for this? Believe it or not, the hosts of the popular MythBusters television show on the Discovery Channel held the firm belief that you would get increasingly wet if you ran through the rain, since you would end up hitting more raindrops per second, i.e., the rate at which you would hit raindrops would be greater. This does seem to make sense, right? 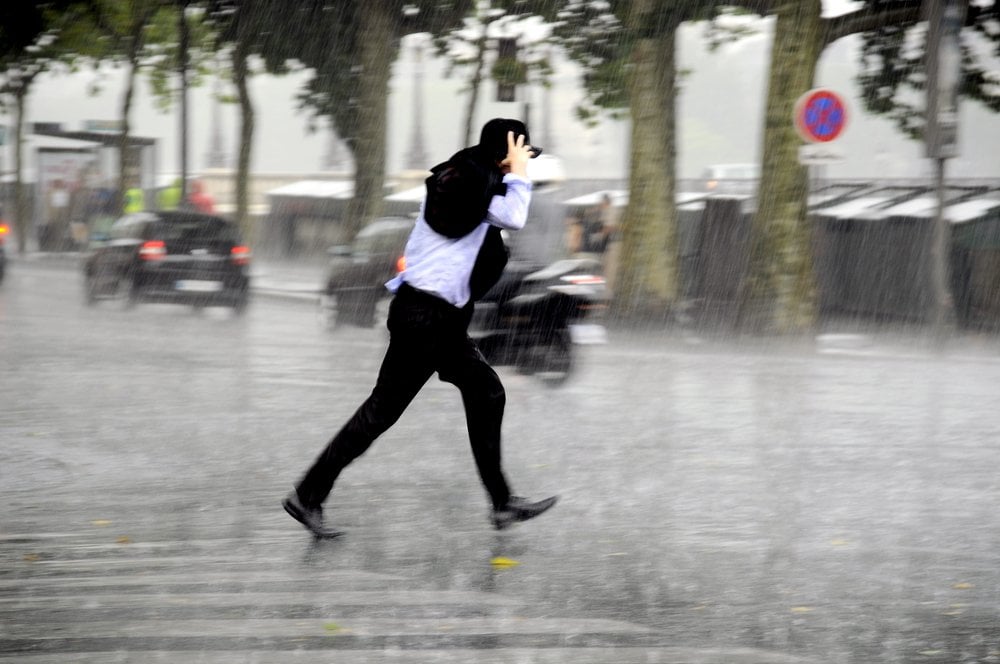 Could the rain hitting you from the front make you wetter if you run? (Photo Credits : alexkatkov/Shutterstock)

Why is it better to run through the rain?

However, Doug Craigen, a physicist based in Winnipeg, provided a simple explanation to “bust” this “myth”. Regardless of whether you decide to run or walk, there is a finite amount of water between you and your destination. If you run, you hit the water at a faster rate and accumulate more water per second. On the other hand, if you walk, you hit the water slower and absorb less of it per second. However, when you run, you cover the distance faster, thus reducing the absolute number of seconds you are exposed to the rain. When you walk, although you absorb less water per second, you will be out there in the rain for many more seconds, thus getting considerably more soaked. To reiterate, it’s better to run than to walk in the rain!

Why is it better to run through the rain, empirically?

Trevor Wallis and Thomas Peterson, running enthusiasts and meteorologists at the National Climatic Data Center in Asheville, North Carolina, conducted an interesting experiment to further reinforce the support for running over walking in the rain. Amidst a heavy downpour near their office, they mapped out an approximately 100-meter route, put on cotton sweatsuits and headed out. Wallis decided to run the course, while Peterson walked. At the end of the path, each of them weighed their sweatsuits. Peterson’s suit weighed 40% more than Wallis’. Consider both their sweatsuits as human-shaped sponges. Each of these sponges, when exposed to rainwater, would absorb some amount of it. Clearly, the person whose suit absorbed more water was heavier and therefore wetter.

Those of you with more of a mathematical inclination, how about we prove this idea with the help of equations?

Why is it better to run through the rain, mathematically?

Consider a person moving along a path with speed ‘V’. Raindrops are falling down on them at speed ‘u’. The surface area of the top of this person’s head is At and the frontal surface area of the person’s body is Af. The number of raindrops/m3 of air is assumed to be a constant represented by ‘n’.

Image: a person walking down the road, arrow from top to bottom pointing at person’s head ‘u’, arrow pointing sideways in front of the person ‘V’

The rate of absorption of raindrops from the top and the front are given by the following two equations:

If we simply went by these two equations, we may come to the same conclusion as the guys from Mythbusters that by reducing our speed ‘V’, we could reduce the rate of absorption of rainwater and therefore get less wet. However, this conclusion is based on incomplete information. Let’s get acquainted with our time variable ‘t’ before we jump to any conclusions.

So, the total amount of rain hitting the person in time ‘t’ can be denoted by:

Notice that in Equation ‘3’, N holds an inverse relationship with ‘V’. As a result, the total number of raindrops hitting a person will increase as their speed decreases. Thus, if they run, they are hit by fewer raindrops. Secondly, the term that denotes the amount of raindrops hitting the person from the front has no bearing on the speed (V) of that person. The person will be hit by the same amount of water from the front, regardless of whether he walks or runs. This is in line with what physicist Doug Craigen explained earlier in simpler terms.

In conclusion, if you’re stuck in a tremendous downpour with no shelter to take refuge under, your best bet is to make a run for it as fast as you can!