There were three reasons why the July 20th assassination plot failed: 1) The change of venue for the meeting from the reinforced, underground bunker to the conference hut of Wolf’s Lair. 2) The fact that only one explosive was armed instead of two. 3) The change of position of the briefcase containing the explosive from under the conference table to next to Hitler at the last second.

Sometimes, history is not determined by major political decisions or widespread wars or protests, but rather by small, seemingly unimportant parts of a plan that go south and cause catastrophes of epic proportions.

This story is about one such event – a meticulously planned military-cum-political operation that went terribly wrong due to small changes in the science that was involved in its execution.

Towards the end of the second World War in 1944, Germany’s hope of pulling off a comeback was all but finished. A significant portion of the German populace, including many senior officers of the Nazi Army itself, was completely disillusioned with the leadership of Adolf Hitler, who was adamant on continuing the war until the last Nazi breath. By doing this, he was essentially leading his already ravaged country to complete annihilation at the hands of the Allies. Something had to be done to stop this from happening. 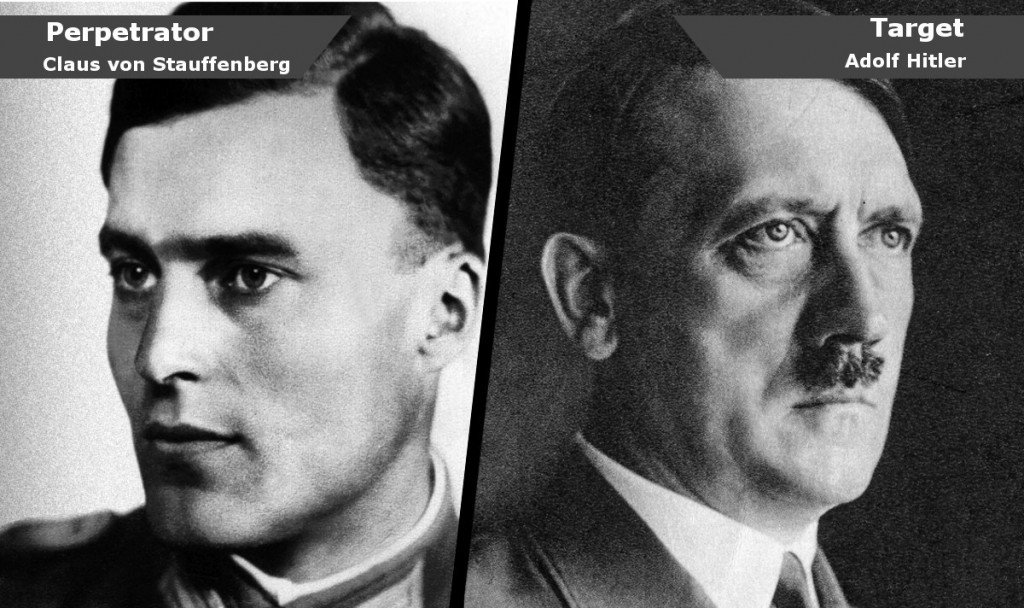 And thus, the ‘July 20 plot’ was hatched: a few top politicians and some high-ranking German Army officers planned to assassinate Hitler on July 20, 1944 and subsequently take control of the government and present peace initiatives to the Allies in order to end the war. Also known as ‘Operation Valkyrie’, it became one of the most defining events in the final chapters of the world war.

As mentioned earlier, the list of plotters included some eminent political and military figures, but the principal plotter who took charge of planning and executing the plan, including the assassination itself, was Claus Schenk Graf von Stauffenberg, a colonel of the German Army who had lost his left eye, his entire right hand, and two fingers on his left hand during an air raid in April 1943.

What was supposed to happen

The assassination was to be carried out by planting a pair of explosives in a conference room – an underground bunker made of reinforced concrete with only one steel door and no windows. A closed, reinforced area like that would be an ideal place for exploding a bomb… internally.

You see, a reinforced building – made of steel and concrete – provides impeccable protection against external explosions, because blast waves can’t penetrate the thick, strong surface of the building. However, even if a low-order explosive were to go off inside such a building, the consequences would be disastrous. The blast waves (and the shrapnel) produced by the explosion wouldn’t be able to penetrate the walls and would bounce right back inside the room. The air pressure generated by even a small explosion would kill everyone instantly. 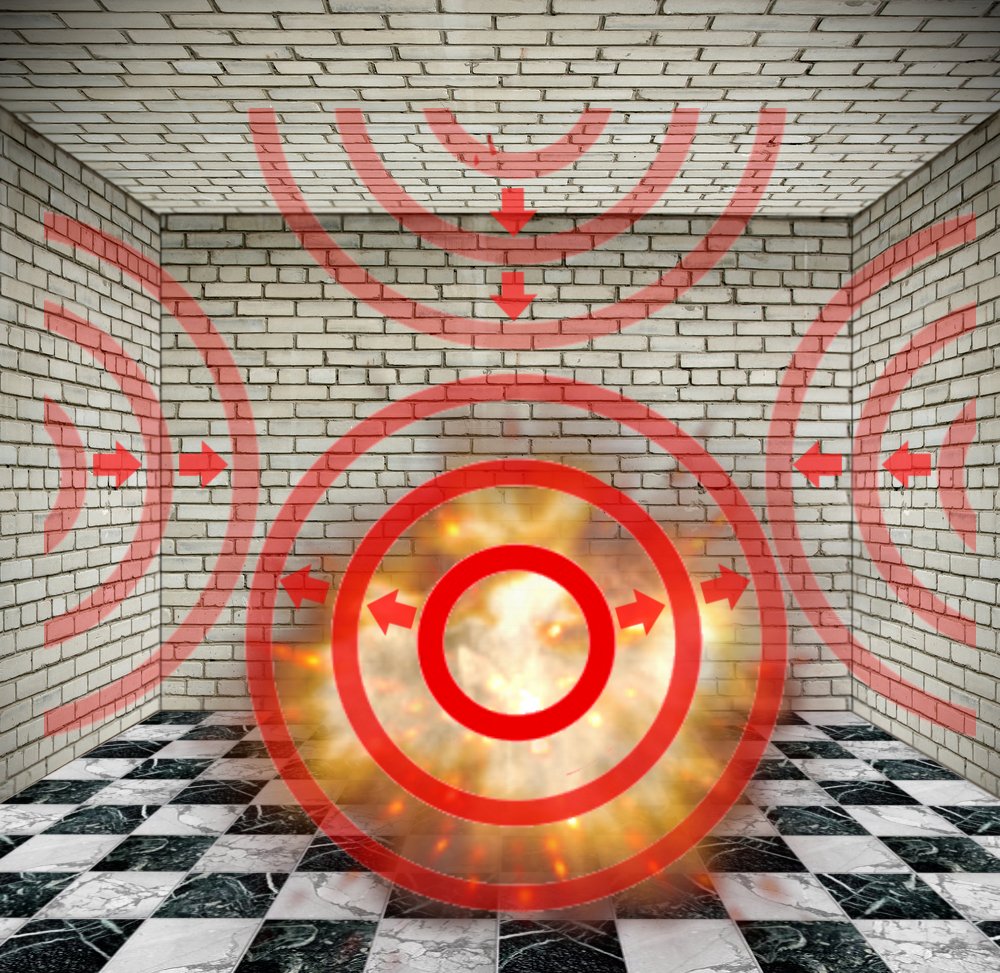 Blast waves of an explosion in a closed room

Still, the plotters decided to plant two explosives in the bunker for good measure. Stauffenberg was to put the briefcase containing two armed explosives as close to Hitler as possible and leave the room a few moments later. The plan seemed foolproof… until three small variables changed in the final moments before the plan was executed.

Everything was going as planned until the plot suffered its first setback:

Change of venue for the meeting

The weather on July 20th was unusually hot, which prompted Hilter’s officials to change the venue of the meeting from the reinforced, underground bunker to the conference hut of Wolf’s Lair. Unlike the bunker, this room was a regular meeting room with a long wooden table in the center, small decorative items, and adequate windows for ventilation.

This was bad news for the plan, as the destructive potential of an explosive reduces significantly in a relatively open place with lots of wooden objects inside (which can absorb and dissipate the energy of the blast). Although he was slightly perturbed by the change of venue, Stauffenberg concluded that the twin explosions would still level the room, and decided to carry on with the plan… until the second pitfall struck.

Only one armed explosive

While Stauffenberg was arming the explosives, along with an accomplice in a private chamber, an unexpected call from outside the room startled the two men, and they were only able to arm one explosive instead of two. Stauffenberg – and the fate of the entire plot – now relied on the potency of the one live explosive that he carried into the conference hall.

Change of position of the briefcase

How badly injured a person is during an explosion depends on their proximity to the bomb; the nearer the person is, the higher the chances of the person sustaining fatal injuries. This is why members of bomb disposal squads wear bomb disposal suits while defusing bombs.

Since Stauffenberg only had one live explosive at his disposal to carry out the assassination, his only hope for success rested on placing the explosive-containing briefcase as close to Hitler as possible for maximum impact. He managed to do that, since there was only one person standing between him and Hitler. He placed the briefcase under the conference table, as close to Hitler as he possibly could, after which he left the room on the pretext of answering a phone call. 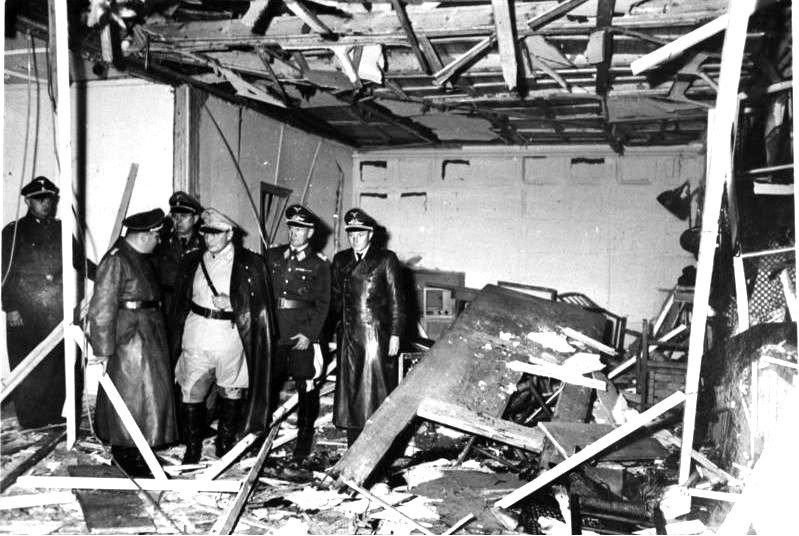 A picture of the Wolf’s Lair conference room soon after the explosion occurred (Photo Credit : Wikimedia.org)

The bomb did explode a few minutes later, but except for a shattered eardrum and a few minor injuries, Hitler escaped the explosion unscathed! As it turns out, after Stauffenberg exited, the man standing next to him filled his position and unwittingly moved the briefcase away from Hitler, saving the Fuhrer’s life. The unsuspecting man succumbed to the injuries intended for Hitler by practically standing right above the bomb.

Here’s a short clip from the movie Valkyrie (2008) depicting the final moments leading up to the explosion:

There have been a number of studies regarding how the assassination plot unfolded and how three small variables foiled the entire attempt. Had two bombs been placed instead of one (as intended originally), or if the meeting had been held at its original venue, i.e. the reinforced bunker, or had the bomb not been moved away from Hitler at the last instant, Hitler would have been assassinated. As a result of that, perhaps the thousands of lives that perished in the war’s final year due to his illogical adamance would have been saved.

Although the plot failed to generate the expected results, it became a burning symbol of German Resistance and showed the world that not all Germans were like Hitler and the Nazi Party. There were many, like those involved in the plot, who were willing to sacrifice their own lives to liberate Germany from his tyrannical rule.