Swords are an integral part of the historical analysis of ancient and medieval warfare. They continue to intrigue us, despite the fact that most battles today lack swords entirely. In this article, from the European broadsword to the Japanese katana – we still study them, compare their advantages and disadvantages, and fantasize about imaginary battles between two skilled sword fighters using different swords.

Straight from the west, curved from the east!

One of the longest running arguments among sword enthusiasts revolves around the two dominant shapes of swords: curved and straight. Traditionally, straight swords have been used by Western European cultures, while curved swords are known for being more Eastern, particularly Middle Eastern scimitars and the Indian Talwar.

Medieval history suggests that there has been no superior civilization between the West and the East. It all depends on which era you were living in. However, each of these powerful cultures obviously preferred one type of sword over the other. Why would that be the case if they weren’t absolutely sure that their swords were better than the swords of their enemies? So… which sword reigns supreme?

The answer to this question is that the clear demarcation between straight and curved swords mirroring the cultural difference between the West and the East is a falsity. There were plenty of straight swords in Eastern cultures, as well as curved ones in the West. An Indian sword, the Khanda, was famously straight, as was the Turkish Y’tanga. Similarly, there are many examples of curved swords in Europe, such as the Szabla and the Flacion. 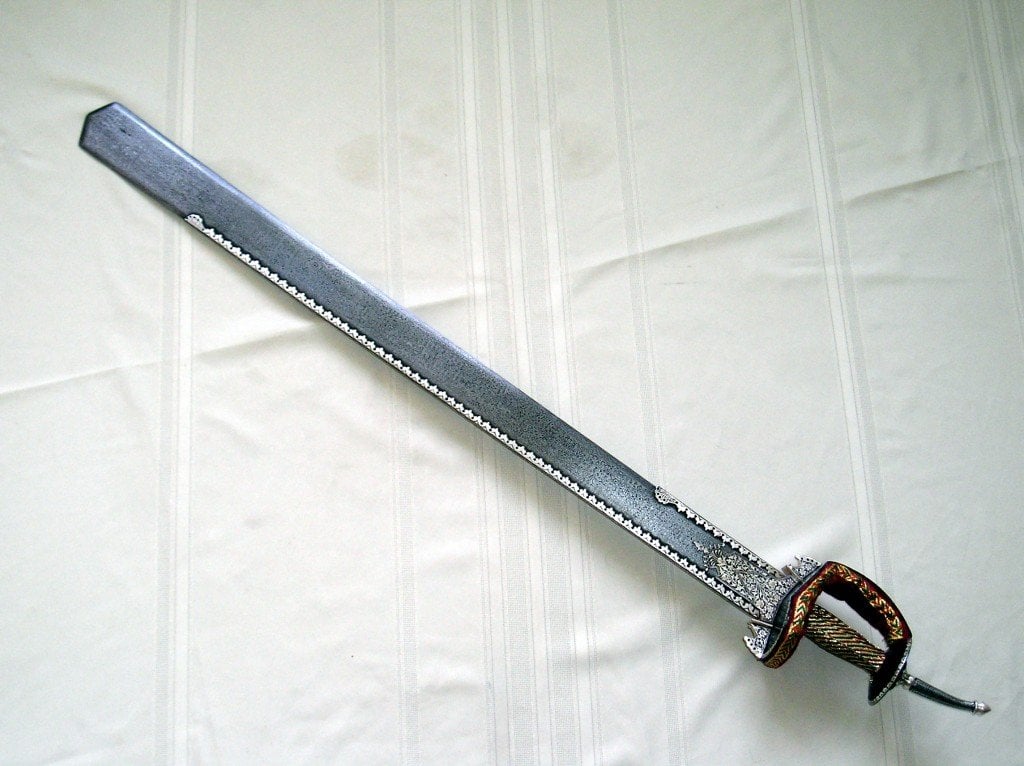 However, it is true that Eastern cultures loved curved blades far more than their European counterparts. One of the main reasons for this is the prevalent landscape and fauna of the region.

Curved blades became so popular in Eastern cultures simply because the Middle East, Central Asia and India were famous for their wide expanses of land, which were ideal for cavalry charges. Remember how Genghis Khan conquered most of Asia on the strength of his cavalry alone? The Mongols also achieved this feat with the assistance of their awesome curved scimitars. As it happened, men on horseback found it much easier to wield a curved sword than a straight sword.

Arguments that support the superiority of a curved sword always mention how a curved blade cuts much more effectively than a straight sword, but this is not necessarily true. The curvature does not help to cut ‘better’, per se, but it does complete the job more efficiently. Give a single curved sword to a man on a horseback facing hundreds of infantry soldiers, and perhaps you’ll see the carnage he can enact on the battlefield.

A straight sword, on the other hand, might cut just as well, but it would require a lot more training and focus for a soldier to wield properly. Its weight wouldn’t seem as balanced from the top of a galloping horse. Also, considering the momentum you will possess on horseback, there is a good chance of you losing your sword because it got stuck in one of your victims. This wouldn’t be an issue with a curved sword.

Eastern armies were huge, especially during ancient and early medieval times. Equipping each man with a sword would have been a costly affair for the constantly squabbling Oriental kingdoms. Most of the armies were actually comprised of archers that kept a fair distance from the heat of the battle.

However, in the middle or near the end of most battles, the archers were forced to draw their swords and attack their enemies head-on. This was often a desperate move on the part of the losing side. At that point, when an inexperienced swordsman was surrounded by enemies, the only way to escape was the flexibility and speed of curved swords.

When is curved sword better?

Curved swords are easier to draw from the sheath than a straight blade. They should also be your go-to choice if you have to hack down multiple enemies quickly. Curved swords have more cutting area than straight ones, as they have a better angle of attack. It also requires less training to wield a curved blade than a straight sword.

When is straight sword better?

In one-on-one battles, however, the straight sword is far superior. The reason straight swords were more popular in older European armies is because their armies were generally smaller. The populations in that part of the world were smaller than the big Eastern civilizations, so their infantry focused more on training each individual soldier in the arts of warfare, rather than simply increasing the size of their armies.

A straight sword is much better for thrusting and finishing off an enemy with singular blows. A curved sword would hardly do any damage if a soldier were wearing chain-mail armor (which was a very popular form of armor in Western cultures). A highly trained swordsman wielding a straight sword could masterfully combat this form of armor by strategically attacking the chinks visible in the pattern.

Similarly, a straight sword is better if you have to block an attack. In fact, if you are using a two-handed European broadsword, then God have mercy on your victims, because the strength behind each offensive stroke is almost a guaranteed deathblow.

The obvious superiority of the Broadsword

Although these are the basic points regarding the differences between the two types of swords and the preferences of their wielders, the final verdict of which is “better” is definitely not in. This debate is as heated as ever, with no obvious answer on the horizon. Sword connoisseurs just can’t seem to agree about anything!