A samurai sword is made of excellent-quality steel that is repeatedly heated, hammered and folded. The repetition of the process ensures the removal of all air bubbles that can form in the steel (which weakens the sword) during heating.

Whenever there is any discussion of historical warfare and the importance of sword-fighting skills, the word “Samurai” always seems to enter the conversation. For hundreds of years, heroic tales of the unmatched bravery of the Samurai have been delivered to the ears of eager listeners around the world. The combat skills of the legendary Samurai are greatly complemented by the strength of the swords they possess. Dawn Of The Samurai Swords

Long ago—before the turn of the second millennium—the main weapon for Samurai on the battlefield were bows and arrows. When the arrows were depleted, warriors would resort to the polearm, which still provided them with ammunition for killing the enemy at a distance. It wasn’t until much later that these warriors decreased their usage of archery and started adopting swords as their primary weapon for battle.

In the early days, Samurai borrowed their sword style (a straight blade) from Koreans and Chinese, but it was then transformed into a sword popularly called Chokuto.

Katana, the most iconic Samurai sword with a curved blade, was only developed when Samurai warriors began fighting predominantly on a horseback. The curved blade made it easier for Samurai warriors to slash their opponents while mounted. However, straight-bladed swords continued to be widely used by another type of Japanese warrior: Ninjas.

During the Tokugawa period in the seventeenth century, an official sword-testing department was formed to evaluate sword quality! During the trial, swordsmiths would demonstrate a Katana’s ability by slicing through a pile of cadavers of persecuted criminals. While the corpses of deceased criminals were used for testing most of the time, some culprits who were convicted of heinous crimes were used for testing the sword while they were still alive. This testing was usually remunerated by the bidder of the sword. It has been recorded in the history books that the cost of testing was sometimes equal to the price of the sword itself! Over the years, Samurai have mastered the skill of making many different types of swords by varying the curvature, size and handle. This helped to serve different needs on the battlefield and even beyond it. Some of the most popular types of Samurai swords are the Katana, Tanto, Wakizashi, Tachi, Odachi, etc. They all had their own qualities and were used according to the type of duel or conflict in which the Samurai was engaged. Let’s look into each of these swords in a bit more detail:

Katana is easily the most famous Samurai sword. In fact, many refer to Katana as a “Samurai Sword”. It is characterized by its distinctive appearance—a curved, single-edged blade with a long grip to accommodate two hands. Though there is no fixed size for a Katana, most of them have a length between 60 cm to 80 cm. Historically, the Katana was worn with the edge facing upwards, allowing a warrior to draw the sword and cut their opponent in two pieces with a single stroke!

Tanto is the smallest of all samurai swords, with a size ranging between 15 cm to 30 cm. It is basically a Japanese dagger. Tanto or Wakizashi was usually the second line of defense for a Samurai warrior, accompanying the main Katana or Tachi. It is reported that Samurai warriors who had Tanto were never without them, no matter where they went. Tanto, on account of their diminutive size, were not used for slashing, but were very effective for stabbing.

Wakizashi is another ‘accompanying’ sword, like Tanto, but bigger in size. Its length is generally between 30 cm and 60 cm. Wakizashi means “side insertion” in Japanese. Great Samurai warriors used to carry Wakizashi in tandem with their iconic Katana. In fact, there is a Japanese term to articulate this combination: daisho. Daisho translates into large and small, with ‘large’ referencing Katana and ‘small’ implying Wakizashi. Tachi is a Samurai sword that is even more curved and longer than the emblematic Katana. It is generally between 80 cm and 100 cm. This sword is specifically designed to be used by horse-riding warriors. Its extra length and curve made it optimal for cutting down enemy foot soldiers.

Also Read: Curved Sword Vs. Straight Sword: Which Is Better? 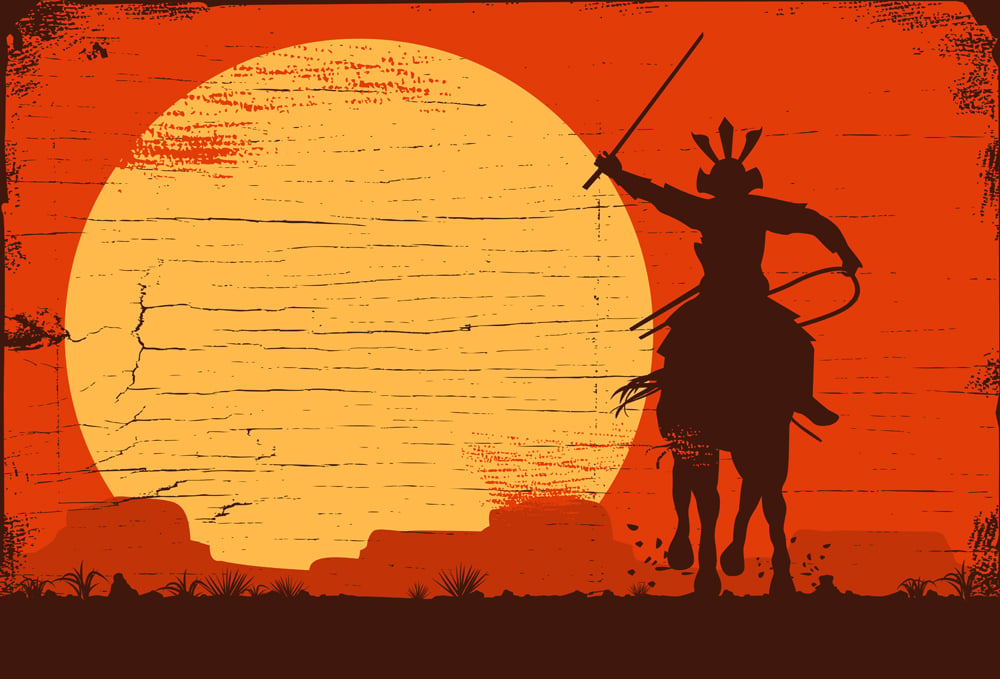 Tachi sword was useful for Samurai warrior on a horseback (Photo Credit : Seita/Shutterstock)

The largest type of Samurai sword is the Odachi. Some even call it Nodachi, which is Japanese for “field sword”. Odachi appears similar to Tachi, but is notably longer, with a length greater than 100 cm. Odachi was typically carried by foot soldiers as a weapon to attack opponents over a long range. Odachi was only suited for large open battlefields due to its monstrous size. Using Odachi in a constricted environment was almost impossible! 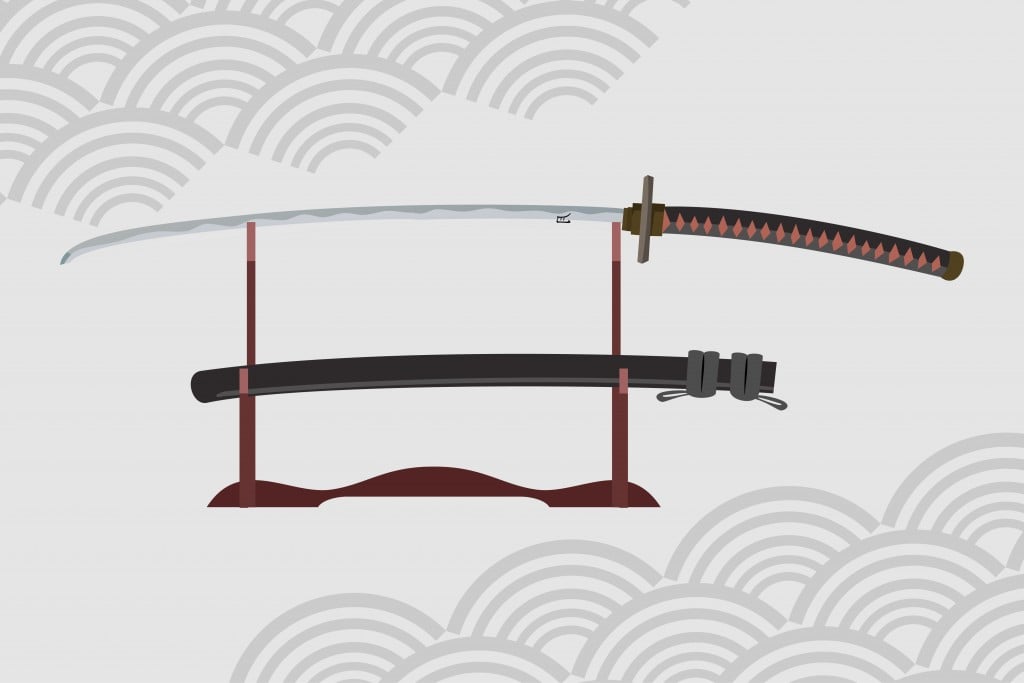 Making A Samurai Sword: What Makes Them So Special?

Centuries earlier, when the Katana was in the vogue, swordsmiths were treated with the utmost respect. In fact, many rulers of that time took up the task of making swords for themselves. Making Katana or other Samurai swords was not just about crafting a sword from a fine piece of steel—it was a religious ceremony.

In earlier times, before beginning the sword-making process, the sword maker had to ‘purify’ himself according to the pious Shinto rituals. This would require a swordsmith to observe fasting, refrain from sexual intercourse and even take a religious pilgrimage.

Once ready to start the forging work, a swordsmith would demarcate his work area—dedicated to making the sword—under the vigilance of a Shinto priest with a sacred rope. To keep himself ‘pure’ as per Shinto rites during the whole sword-making process, the swordsmith would need to stand under a waterfall and recite Shinto prayers every day. If there was no waterfall in the vicinity, the swordsmith would pour a bucket with a predefined amount of water on himself. There are even some folk tales that legendary swordsmiths were assisted by divine powers to make such impeccable Katana!

The process of making a Samurai sword was always, and remains, an elaborate one. It requires a great deal of conviction and perseverance. The sword is made of excellent-quality steel that is repeatedly heated, hammered and folded.

The repetition of the process has its advantages:

After the sword is heated, hammered and folded to the swordsmith’s satisfaction, it needs to be cooled. However, it cannot be cooled by directly submerging the blade into cold water, as that would make the surface of the blade brittle. On the other hand, if it is cooled too slowly, the blade would become blunt. Man testing out the Katana

To achieve an optimal level of cooling, a thin layer of clay (a combination of ash and water with the clay) is applied on the cutting edge of the blade to cool it down, keeping it sharp and hard, while on the other edge, a thicker layer of the same clay is applied to make the sword sturdy and shatter-proof—essentially providing a sturdy backbone.

Also Read: What Is Damascus Steel?

This is why iconic Samurai blades like Katana or Taichi are generally curved, since the two edges cool at unequal rates!

“The sword embodies the soul of the Samurai wielding it.” This aphorism aptly summarizes the Samurai sword. Katana and other Samurai swords are indeed majestic-looking weapons with all the strength that a piece of steel can provide, in addition to the patience and care of a master craftsman. What more could you ask from a sword of such legendary stature!