If the bullet is shot from an angle of 30 Degrees, then being underwater in the range of 3-5 feet (0.9-1.5 meters) can ensure safety from most guns.

Remember the opening scene of Saving Private Ryan, when Allied forces were pinned down by heavy machine-gun fire from the bunkers on Omaha Beach so that they jumped over the sides of the boats into the water to avoid being hit by stray bullets?

Or perhaps that scene from Mission Impossible: Ghost Protocol, when Ethan Hunt (Tom Cruise) and William Brandt (Jeremy Renner) crash into the water when their car is shot?

There are countless such scenes in films that show people diving into a body of water such as a pool, canal, or even ocean to avoid being hit by a bullet.

However, it is a great mystery whether being underwater can save you from bullets due to the varied approach (sometimes being underwater saves you and sometimes it doesn’t) that movies take when dealing with this ‘underwater myth’. Given that, let’s clear up the uncertainty around this frequent and much-debated cinematic trope once and for all!

You probably know that every medium offers some resistance to the movement of an object as it moves through it. Thus, the air surrounding us offers us resistance to our common movements, such as walking or running, as we move through it.

It is the pulling force that wears you down and slows you down as you swim through the water; it is the same force that counteracts the forward motion of a ball. A ball sails easily enough through the air to hit a target, but as soon as it breaks through the surface of the water, things change dramatically!

Once it enters the water, the bullet must work extra hard against the natural resistance of the liquid to move forward. However, in the case of most bullets, they do not go beyond a few feet.

Check out the image below from a Discovery Channel documentary of D-Day in Omaha Beach.

The bullet is fired from an MG-42 machine gun, a very powerful firearm. The bullet leaves the rifle at a breathtaking speed of 3000 feet per second but slows down and comes to a halt within less than a yard (2.5 feet at the most)!

Factors that influence the speed and range of an underwater bullet

As you have just seen, the traction force is the biggest cause for concern for a ball that wants to go fast and deep underwater. However, is the drag offered by water identical for everything that moves through it?

You see, the drag force depends on several factors, including the type of bullet, its velocity when fired, the drag coefficient of the bullet, and the time it has spent in water. It also depends on the density of the fluid in question (the fluid is water in this case). For people who have a thing for formulas, here is the drag equation:

where FD is the drag force, ‘p’ (rho) is the mass density of the fluid, v is the flow velocity relative to the object, A is the reference area, and CD is the drag coefficient. 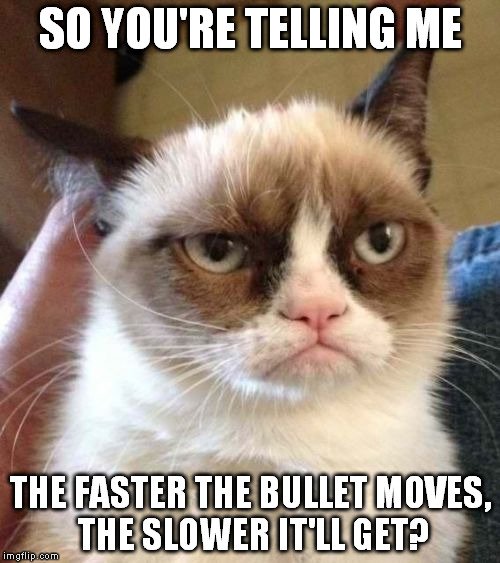 Also, the denser the fluid is, the slower a bullet will get as it moves forward. For instance, the density of water is higher than air, so a bullet will slow down much more quickly in water.

A TV show has tested this in reality!

Mythbusters, a popular Discovery Channel program, tested the “bullet-proof” ability of water in one of its episodes. After shooting into the water with a variety of rifles, including a 9mm pistol, shotgun, M1 Garand semi-automatic supersonic rifle, and a 50-caliber rifle, they concluded that you could protect yourself from an underwater onslaught of bullets from most rifles.

In real life, however, a bullet is rarely fired from a position directly above the water. So if the bullet is shot from an angle of 30 Degrees, then being underwater in the range of 3-5 feet (0.9-1.5 meters) can ensure your safety from most guns.

As it turns out, most films are scientifically accurate when they show the protagonist jumping into a pool of water to escape the hail of bullets that the villain fires at them. I think it’s not always a bad idea to believe in Hollywood’s magic!

Check your knowledge about dodging the bullet by being underwater!