Mensa is a non-political, international high-IQ society for bright or exceptional minds. With members ranging from 3-103, Mensa has been one of the most prestigious intellectual circles on the planet since the mid-1940s.

Have you ever made a joke at a party that completely sailed above the heads above the other guests? In school, were you that lucky student who never had to study for tests, but always passed with flying colors, as though your brain was a sponge eager to consume and retain knowledge? If you suspect that you’ve been blessed with a high level of intelligence, you may be a perfect candidate for Mensa.

The name of the organization itself often brings a raised eyebrow or a nod of approval, as it is notoriously difficult to be welcomed as a member, since the entrance requirements are quite challenging, albeit straightforward. Before you send in your application to join this group of global geniuses, let’s take a closer look at how Mensa began, what its goals are, and how it is accepted throughout the world.

Back in 1946, Roland Berril and Dr. Lancelot Ware, a lawyer and a scientist/lawyer, respectively, founded Mensa in Oxford, England as a club with a sole qualification—a high IQ. To this day, membership is opened only to those who score in the 98th percentile or higher on an intelligence test (the Standford-Binet IQ test or the Cattell Culture Fair Test, among a limited number of others).

Aside from this sole measurement, no other qualifications for membership exist, resulting in an extremely diverse membership in terms of age, gender, race, social strata, sexual orientation, religion, language and cultural background. Due to this limited qualification for involvement, Mensa members include poor and rich alike, as well as multi-doctorate professors, truck drivers, waitresses, rocket scientists, philosophers and poets, among countless other professions. 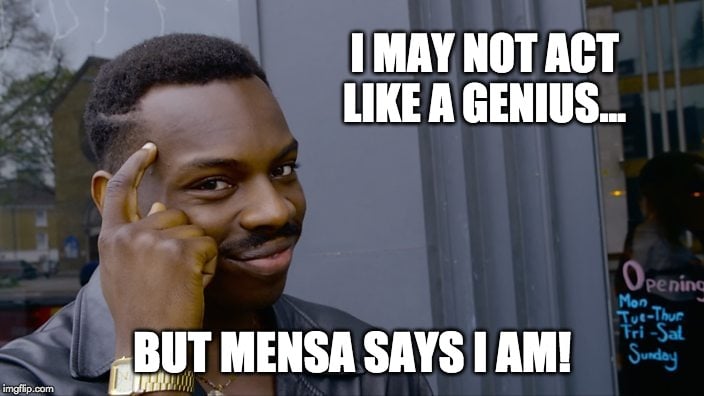 While the first branch of Mensa originated in England, it was designed as a round-table (mensa meaning “table” in Latin) organization where members could meet once a month on equal footing for conversation and general engagement.

While this wasn’t initially successful, with the founders being surprised at the number of “common people” who qualified for inclusion, the idea had been born.  The opening of the American branch of Mensa (currently the largest) is when things really began to take off. Since then, Mensa International has grown to nearly 140,000 members in more than 100 countries, with offices operating on every continent aside from Antarctica.

What Is An IQ Test?

Obviously, the fundamental part of joining Mensa is performing well on an IQ test or other accepted intelligence test, but what does that mean exactly? IQ tests are formulated to assess an individual’s intelligence on a universally applicable scale.

In other words, an IQ test doesn’t test you on your knowledge of facts, but rather on your skills in quantitative reasoning, logic, problem-solving, visual-spacing processing, working memory and other basic elements of knowledge. Due to the non-specific elements of intelligence such subjects analyze, it is possible for these tests to be administered to anyone, of any age, from any background.

However, not everyone around the world trusts IQ tests equally, not only because there are so many variations and applicable tests to analyze such intelligence, but also because of potential cultural specificity of “intelligence”, resulting in bias. This will be discussed a bit further below.

Also Read: 11 People Who Have The Highest IQ In The World

There has long been controversy over the fairness and accuracy of IQ tests in their determination of intelligence, as many claim they are biased towards the cultures in which they are administered, and ignore some of the culturally specific forms of intelligence that are highly praised in other parts of the world. Knowledge of herbal medicines and natures is often not given any weightage in IQ tests (Photo Credit : Valentina_G/Shutterstock)

The fact that white and Western societies are where intelligence tests were largely formulated in the 20th century, many claim that there is an inherent cultural bias against other races and groups of people when it comes to the administration of these tests.

In the past, as recently as the 1970s, intelligence tests were often used for malicious purposes, largely to the detriment of people of color and others from non-Western origins. In their darkest application, IQ tests have been used to strengthen political or social support for belief in the superiority of certain racial groups over others.

There are still countless critics of this standard of intelligence measuring, but it remains widely accepted around the world as the most impartial means of assessing general intelligence.

What Is The Purpose Of Mensa?

The original intentions of the founders of Mensa were quite clear, and the three tenets have become something of a mantra for the organization and members alike: to identify and foster human intelligence for the benefit of humanity, to encourage research in the nature, characteristics and uses of intelligence, and to promote stimulating intellectual and social opportunities for its members.

In other words, Mensa doesn’t have any political or social goals outside of promoting an environment where ideas can be fostered and similarly intelligent people can interact, engage and work together to promote a better world.

What Does Mensa Do?

To pursue and achieve these goals, Mensa is heavily involved in organizing summits, offering scholarships, planning members’ events throughout the year, and promoting goals such as literacy and education around the world. This activity and general philosophy continues to this day, but modern-day Mensa may look quite different from the more erudite and scholarly circles of the past.

Today, many of the Mensa conventions and events are opportunities to play games and have fun, with drinking and “frivolity” taking center stage more often than serious-minded discussions on ways to improve the world.

Also Read: Is Your IQ Fixed For Life?

There are certainly enlightening speakers and a confluence of brilliant minds is sure to spark fascinating conversations, but the more casual nature of this high-IQ society has caused some to question its legitimate prestige and value in the modern world. Membership standards remain quite high, but the long-term impact and purpose for each individual member seems to have diminished slightly as the organization has grown and evolved.

Despite this perceived shift in the attitude of Mensa International, or at least the attitude of the world towards Mensa, the intentions and actions of the organization remain altruistic and clear. They take no part in political or social movements, nor do they chime in on religious or cultural issues; they are solely established as a gathering place for those of elevated intelligence. Now, with all of that in mind, if you’re still feeling particularly bright, go ahead and sign up for an IQ test and earn your own place in the highest echelon of brain power on the planet!