Newton’s cradle is a desk toy and an educational tool that demonstrates the laws of conservation of energy and momentum. When one of the balls is lifted & released, it strikes the subsequent stationary balls and through a series of swift energy transfers, the last ball gets propelled outwards.

Seen on the desk of every Fortune 500 CEO, psychotic villains, or protagonists in movies, Newton’s Cradle is a corporate toy most of us wish to have on our work tables. This swinging ball setup relieves stress in some and inspires creativity in others, but for the majority of people, it is little more than a fascinating distraction.

Contrary to popular belief and its naming, the swinging ball setup was not actually invented by Newton, nor was he the first to ink the laws that the toy demonstrates.

The principles demonstrated by such a cradle were first mentioned in a paper presented by John Wallis, Christopher Wren, and Christiaan Huygens to the Royal Society in the year 1662. Christiaan Huygens, in particular, contributed the most to the cradle’s invention. Huygens’ work, De Motu Corporum ex Percussione, discusses the collision of suspended bodies and the transfer of motion from a moving body to the one at rest. He was also the first to report that explaining the mechanics behind a cradle-like system required the use of conservation of momentum and a quantity proportional to mass times velocity squared. The quantity mass times velocity squared is, of course, the kinetic energy of a moving body; even so, the term was coined nearly a century after Huygens’ discovery.

On the other hand, the law of conservation of momentum was first suggested by Rene Descartes. Although, the mathematical representation he put forth incorporated speed instead of velocity. Rene’s formula, momentum = mass x speed, did work in certain scenarios, but couldn’t explain the collision of objects and the ensuing momentums. Huygens replaced speed with velocity, a vector quantity, and was therefore more successful in explaining the collision of objects.

Nevertheless, Abbé Mariotte, a French physicist & priest, was the first to properly conduct and record experiments on pendulum balls. Newton mentioned Mariotte’s work in his book, the Principia, and that’s the entirety of contribution to the setup that now goes by his name. 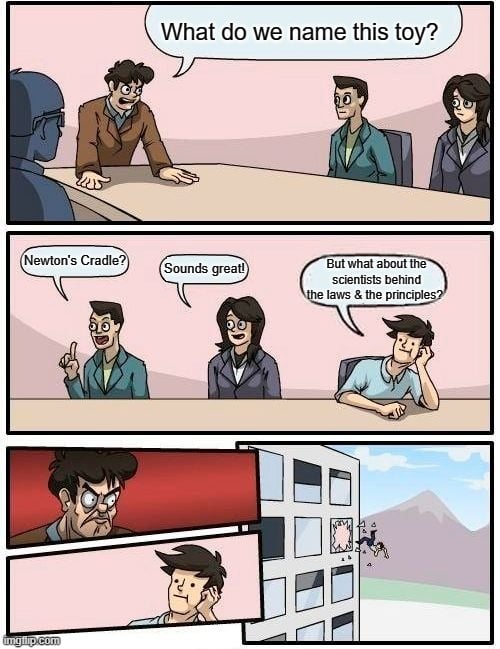 But why “Newton’s Cradle”?  you may ask.

Because Courage, the cowardly dog’s computer said so!

Well, it wasn’t the computer, per se, but it was the actor (Simon Prebble) who voiced the computer in the classic cartoon series who named the swinging ball setup Newton’s Cradle.

The cradle is believed to be named after Newton for two reasons. First, one can derive the law of conservation of momentum from Newton’s second law of motion (Force = mass x acceleration), and second, as an ode to Newton’s far greater contribution to the field of physics than Huygens or Mariotte.

Over the years, Newton’s cradle has undergone quite a few facelifts. However, the basic outline remains the same and is quite simple. An odd number of balls, usually five or seven, that barely touch each other are suspended on a wooden or metal frame. The balls are normally made of stainless steel and on rare occasions, titanium. Stainless steel is an ideal choice to construct the balls, due to its superior elastic properties and inferior price.

Each ball is identical in properties (size, weight, mass, and density) and is suspended using two wires of equal length. The wires angle in from either side of the frame to form an inverse baseless triangle with the balls. They also help restrict the pendulum balls’ movement to a single plane that is parallel to the crossbars of the frame.

The operation of Newton’s Cradle is as simple as its structure. When a ball from one end is lifted and released, it strikes the subsequent stationary ball and transfers all its energy to it. Through a series of incredibly swift transfers, energy is transferred to the ball at the other terminal, forcing it to swing upwards. The terminal ball elevates to a height equal to the first ball before falling back down to hit the still stationary balls. The energy and thus the motion is now conducted in the reverse direction, eventually thrusting the first ball out again.

The following process continues until all energy imparted at the start is lost to friction from air resistance, to sound energy and from any heat generated between the swinging spheres.

As mentioned earlier, Newton’s Cradle demonstrates the laws of conservation of energy and momentum.

Coming back to Newton’s Cradle, at rest, the balls have zero potential energy, as they can’t move down any further (Potential Energy = mgh, at rest h = 0) and zero kinetic energy, since they aren’t moving (Kinetic Energy = 1/2 mv2, at rest v = 0). Similarly, the balls do not carry any momentum either (Momentum = mv, at rest v = 0).

Upon impact with the next ball, the first one loses all its kinetic energy (and as a result, all its momentum) and comes to a dead stop. However, energy and momentum cannot be lost, so it must be transferred to the ball it strikes.

The force exerted by the first ball upon impact causes the second one to compress slightly. The compression is symbolic of energy being transferred in the form of potential energy. As the second ball tries to retain its original shape, the potential energy is converted into kinetic energy and is simultaneously transferred to the subsequent ball. The following chain of compression-decompression, and therefore the transfer of energy, continues until the final sphere.

The final sphere, as it decompresses, doesn’t find a subsequent ball to compress and transfer the energy to. Because transferring energy isn’t a viable option, the final ball pushes on the penultimate ball and gets propelled outwards in return. Every action has an equal and opposite reaction, right?

Since no energy is lost in the transferring process, the final ball shoots up with a speed equal to the dropping speed of the first ball, thus indicating that momentum has been conserved!

Also, the final ball rises to a level equal to the dropping height of the first one, signifying that all energy is also saved!

Although the working procedure and physics behind the cradle are quite straightforward, individuals often inquire: What if we dropped two balls instead of one? Why doesn’t the cradle blast two balls at half the speed? Or better yet, all the remaining ones at quarter speed? Once initiated, will the cradle ever stop?

First, each ball imparts enough energy to move one other ball (given that they are the same size), so the number of balls that get launched outwards will be equal to the number of balls dropped. Second, as evident from the formula of momentum (mv), if the mass is the same (which it indeed is for all the balls), the speed must also remain the same if momentum is to be conserved. Third, the cradle does stop eventually due to energy losses.

Also Read: What Is Orbital Velocity?

In an ideal world, Newton’s Cradle would represent an elastic collision (kinetic energy before and after the collision remains the same), but, energy losses render the collisions inelastic.

Nevertheless, this 50-year-old apparatus continues to prevail as a mesmerizing toy and an excellent educational tool! 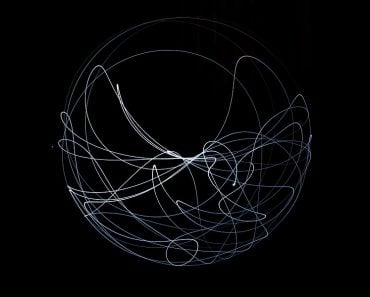