The non-stick property of Teflon cookware is due to the chemical structure of polytetrafluoroethylene (PTFE). PTFE is a fluorocarbon solid that consists of long chains of carbon and fluorine atoms. The strong cohesive forces between the carbon and fluorine atoms make PTFE a non-polar substance that is chemically inert. Additionally, PTFE has virtually no adhesive forces, which means that any foreign molecule has a hard time sticking to it.

Just like anything else, cooking is fun if you’re good at it. However, doing dishes after the meal, which is a natural component of the process of cooking, is not something that most people look forward to. Fortunately, thanks to the advent of non-stick cookware, people who are not experts at the art of cooking food are somewhat encouraged to have a go at it, as they know that even if they mess the recipe up, their cookware will not bear the price of their sloppiness by having bits of burnt food stuck to the pots and pans. 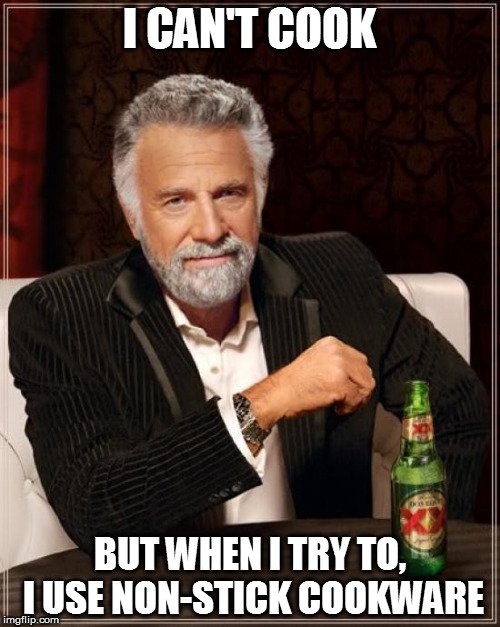 The question is: why doesn’t stuff stick to certain types of utensils? What makes them non-stick?

Short answer: Non-stick cookware is covered with a layer of PTFE, commonly referred to as Teflon, which is known for offering almost no friction to anything that comes in contact with it. 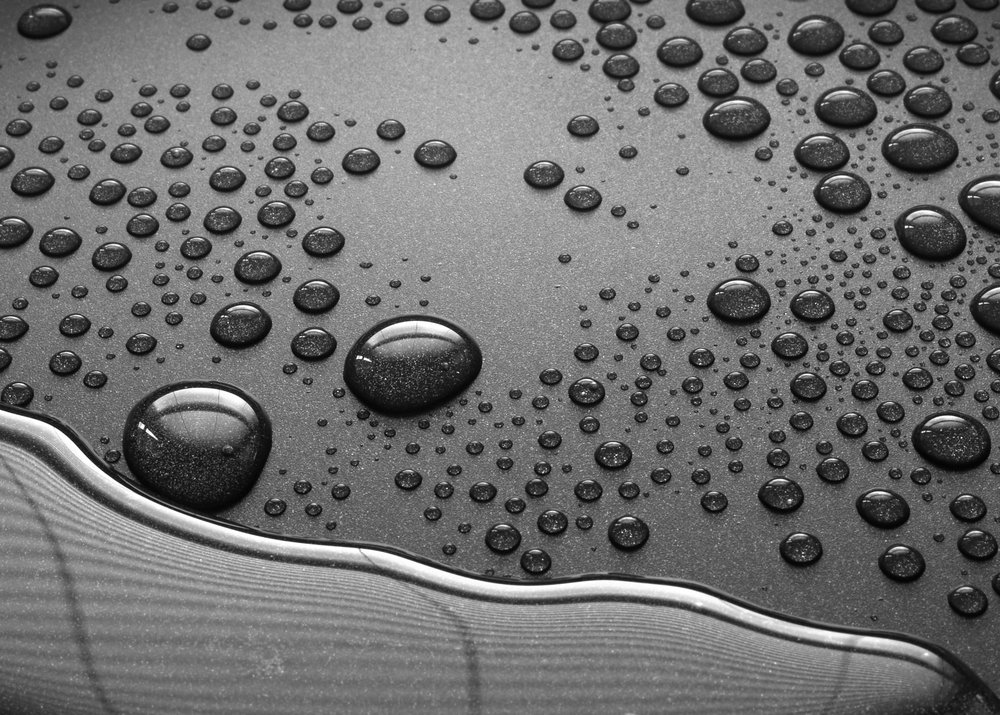 PTFE, commonly known as Teflon, is widely used for adding a non-stick coating to cookware and utensils (Credit: Pefkos/Shutterstock)

Teflon is a synthetic material that can be used to cover the surface of certain object and imparts nonstick properties to it. The name ‘Teflon’ is actually a brand name (patented by DuPont) of polytetrafluoroethylene (or PTFE), which is a non-stick chemical substance discovered back in the 1930s during a laboratory experiment. Although it’s most commonly seen in nonstick cookware in everyday life, PTFE is used in a myriad of objects, including waterproof clothing, computer chips, coaxial cables, stadium roofs, synthetic body parts and spacesuits. 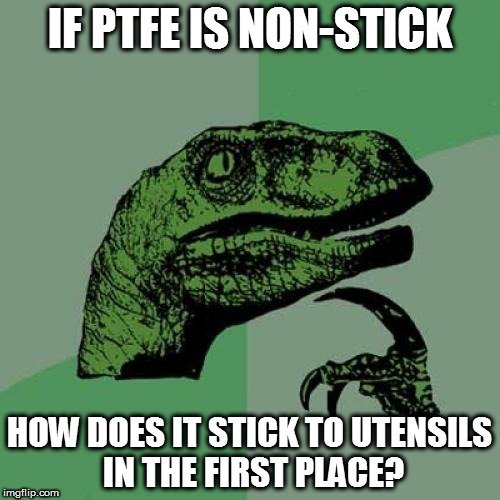 Now, that’s an interesting question, isn’t it? You can find the answer here.

Why Is PTFE Non-stick?

With a number of incredible physical and chemical properties, PTFE could be called a magic material. It is highly inert, meaning that it doesn’t react with other substances easily. It has a high melting point and shows exceptional electrical properties, which makes it an excellent choice to be used for the wiring of computer and aerospace applications. However, that attribute that it’s most commonly known for is its non-stick quality, which is why it’s used in numerous frying pans, pots, and other culinary tools.

Also Read: How Do They Get Teflon, A Non-Stick Material, To Stick To Pans?

The non-stick property of PTFE can be ascribed to its chemical structure. It is a fluorocarbon solid that consists of long chains of carbon and fluorine atoms.

Now, the thing about PTFE is that it’s an introvert, chemically speaking. This means that PTFE doesn’t want to be in contact with other objects, so it doesn’t let anything (including food, water etc.) stick to it. There is a reason behind that too.

You see, carbon-carbon and carbon-fluorine bonds are some of the strongest single bonds in all of organic chemistry. This makes the fluorine atoms only prefer their own kind, while repelling any other kind of molecule. In chemical terms, we say that PTFE has strong cohesive forces, i.e., its constituent atoms have a great affinity towards each other. Furthermore, PTFE has virtually no adhesive forces, which is why any foreign molecule has a hard time sticking to it. 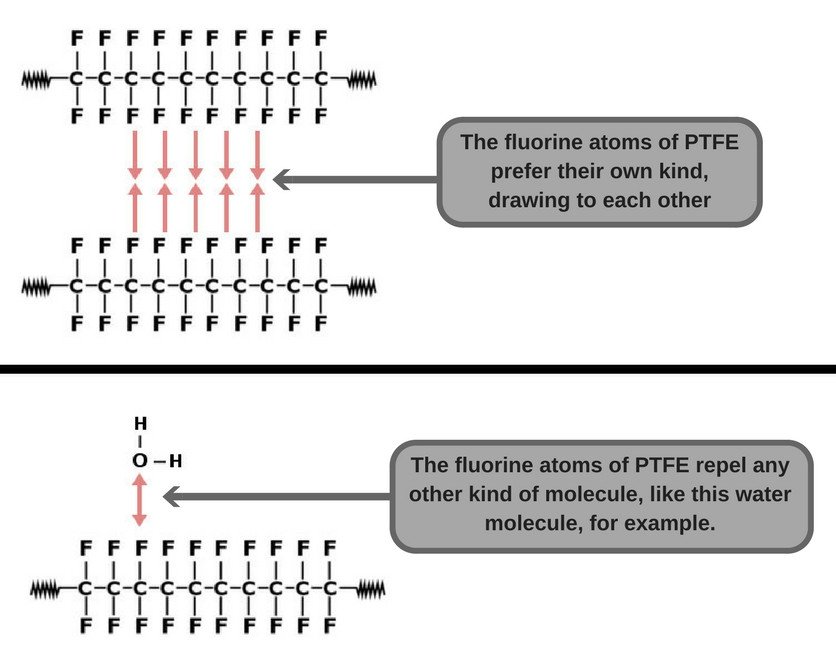 Additionally, it’s non-polar in nature, which makes it chemically inert. This property is highly desirable, as it ensures that the PTFE in our cookware doesn’t react with any food item that’s kept or cooked in it.

The scope of practical applications for PTFE is enormous; it’s used in making plain bearings, slide plates and gears (due to its low coefficient of friction), wiring for aerospace and computer equipment, the production of carbon fiber and fiberglass composites, and in many other areas.

Also Read: What Is Kevlar? Why Are Kevlar Vests Bulletproof? 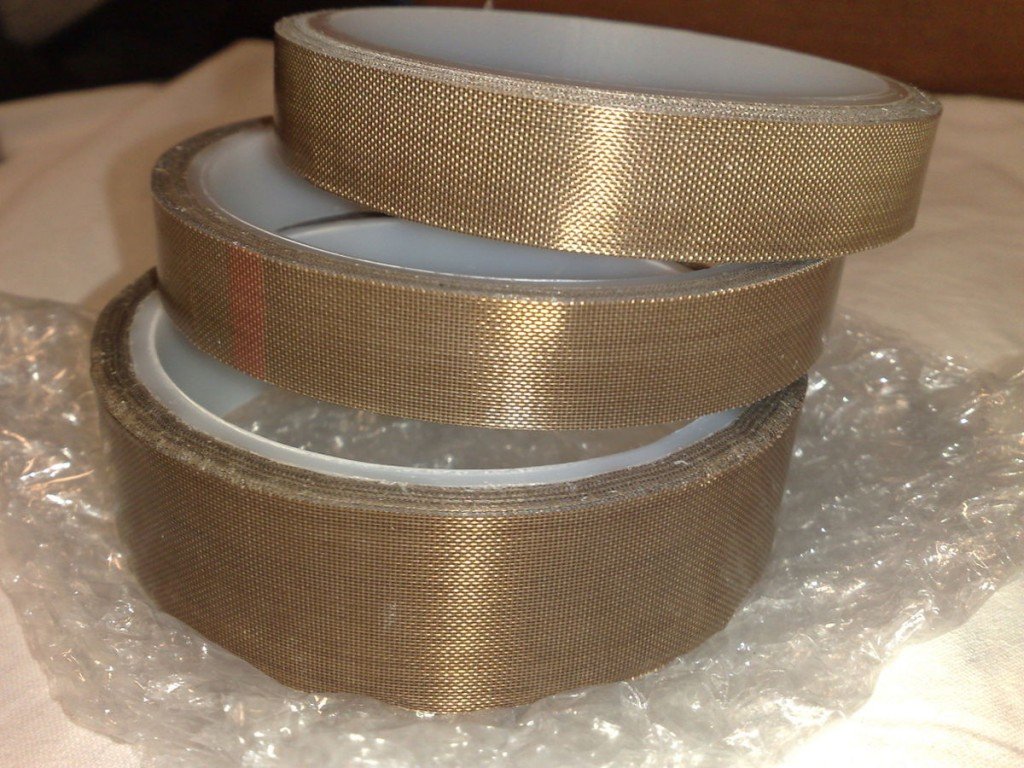 Clearly, the reassurance that you won’t have to spend hours scrubbing the cookware if you mess up the recipe while trying something new definitely motivates people to experiment in the kitchen, thanks to PTFE!