Yes, wingsuit flying is a sport that allows you to glide through the air, similar to how Batman does in the movies. You must wear a specially designed suit that generates lift and reduces drag in order to fly. You can steer by tilting your body like a bird’s wing. However, landing is difficult and dangerous, as the force exerted on the body during landing is fatal.

“The Batman”… those two words are enough to send most guys into daydream mode. The emotion that this superhero invokes in a person is almost inexplicable, but his cultural significance is undeniable. The character’s complexity excites us, his darkness touches a darkness within us and inspires us to seek justice in our own world. There seems to be no other symbol that is more alluring than the Bat Signal. (Even while writing this article, I must have slipped into comic book daydreams a dozen times or so.) 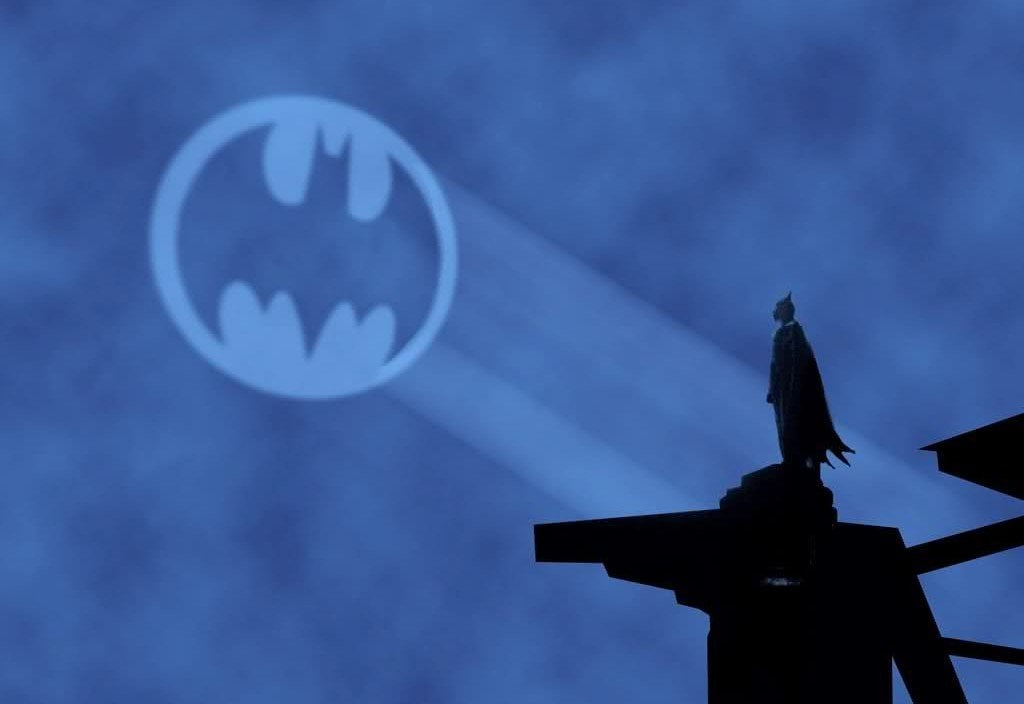 Then, there is the other side to The Batman – the high-end tech addict and gadget-loving billionaire behind the mask. The grappling gun, his utility belt, the Batmobile, the Batwing… these are on every Batman fan’s wish list. Every Batman worshiper’s dream is to be able to spread their cape behind them and glide. If that’s one of your deepest desires, then perhaps wingsuit flying is the kind of adventure sport you’re looking for.

What is Wingsuit Flying?

Wingsuit flying is a combination of two adventure sports: skydiving and hang gliding. A person jumps from an aircraft or from a very high altitude and glides through the air. The diver has to wear specially designed attire called a Wingsuit. The suit has webbed wing surfaces, which are present between the legs, the arms, and the body in order to increase the surface area. This fabric surface area generates enough upward force to prevent the diver from free falling.

With the help of the suit, a wingsuit diver can reduce the speed at which they fall, while increasing his or her horizontal speed. The suit is essentially inflated by the air through which it is moving with the help of small inlets. This helps the suit maintain a rigid structure. Therefore, the divers can rest their limbs and the suits will remain outstretched at all times during the dive. Current wingsuits have parachutes that are on the back: the regular chute and the reserve chute. This sport also requires a diver to deploy his parachute at the optimum altitude to land safely. The average proximity that flyers descend at is 50 to 60 mph, and they can move at speeds through the air of about 70 to 90 mph.

They are also called ‘flying squirrel suits’. Yes, certain types of squirrels can glide between trees. 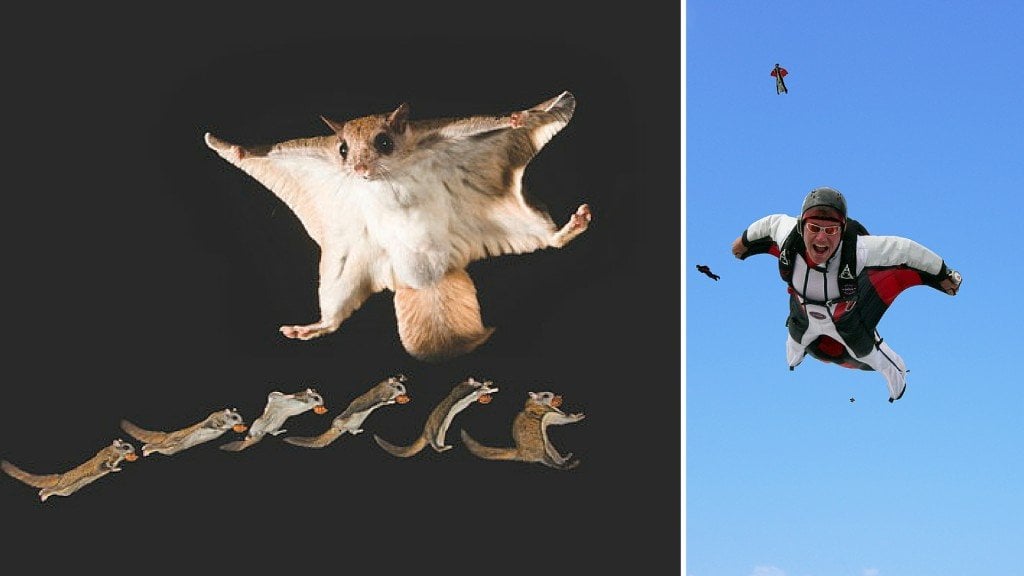 How Do You Control Movement During Flight?

To understand how to maneuver a proximity flying suit, we have to understand the basics of Flight Physics.

Consider any body that is moving through the air. There will be four major forces acting on a body during flight. The horizontal forces are called Thrust and Drag. Thrust is defined as the force resulting from the forward movement of a body. Its opposite component is called Drag, which is an opposing force generated by the medium through which the body is moving. To put in simpler words, the reason why your hand gets pushed back when you stick it outside of a moving car is due to the air resistance (Drag). 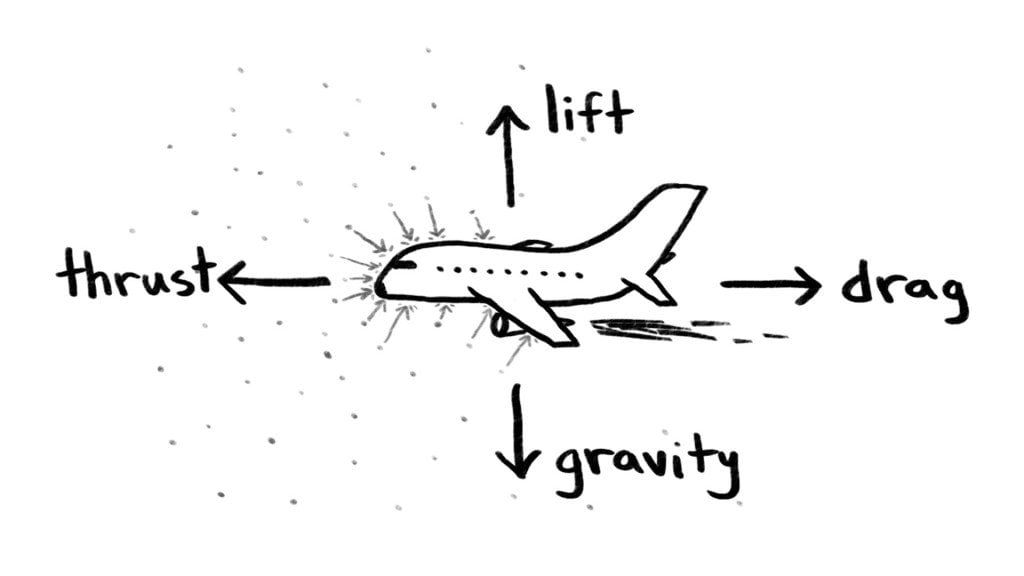 The vertical forces that act on the body are Lift and Gravity. Lift is the force acting on a body that results in the body moving up, which is typically caused by wing-like components. Gravity is the force of attraction towards the earth. The total force is the weight of the body, which is the product of mass and gravity (W=mg). Consider an airplane taking off… the combination of forces, specifically Lift (generated by wings) and Thrust (engines) helps move the aircraft above the runway and ascend. If you look at space shuttle launches, there is only a Lift force, as the shuttle has to take off or “Lift off” in a straight path. Therefore, the result of these four forces determines how the body moves in the air. 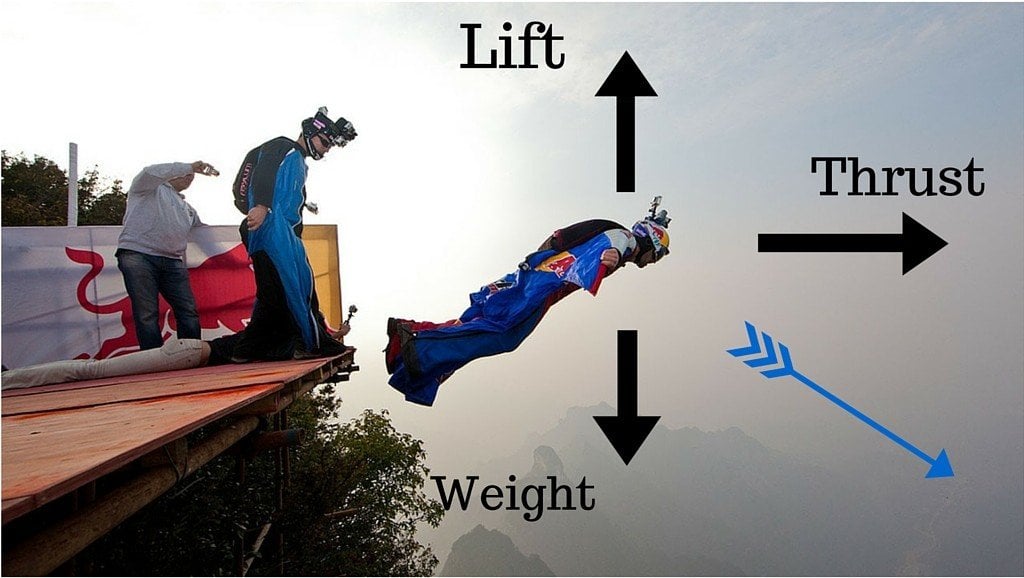 In the case of proximity flying, the suit’s aim is to generate a certain amount of Lift, thus reducing the rate at which the diver falls. The required path of flight for the diver is the blue arrow on the image. The shape of the suit, after inflating, helps to reduce the drag of the diver.

Now, let’s look at how a body turns in midair. As kids, when we were running around the ground pretending to fly, every time we made a turn, we would show this by tilting our arms. Of course, we were trying to copy the movement of birds or planes, but why do we do that? To understand this, we’ll consider the example of a bird. 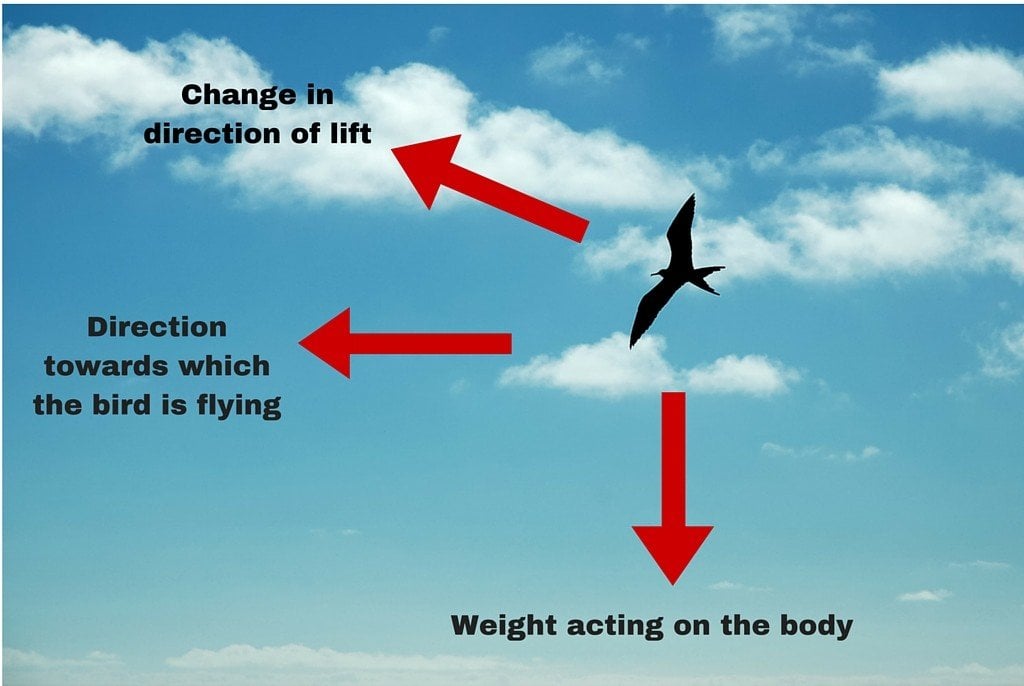 When the bird tilts its wings, a centripetal force, a force pushing a body in a circular path, is generated. Due to the change in position of the wings, the lift force changes direction, acting in a perpendicular angle to the bird’s wings. The result of these force shifts is that the body move toward the sides.

Similarly, a wingsuit diver can steer himself through the air by tilting his or her body like a bird’s wing. As there will be more force on the lower side on the surface of the suit, the diver will be pushed towards the side , enabling him or her to turn. The physical movement speed of the body will determine the rate at which the body moves. 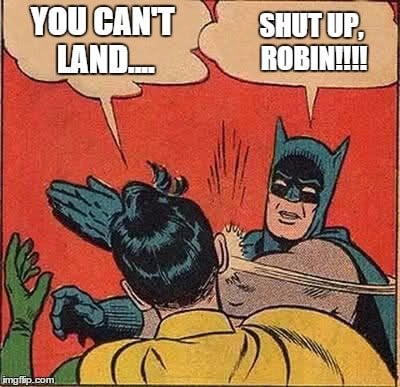 One major flaw in the quest to glide like Batman appears during the landing phase. Researchers have discovered that even though we might be able to glide like Batman, landing will be a major problem. The force that would be exerted on a body while landing is fatal. In other words, if there was a real Batman, he wouldn’t be able to land as we see him do in movies or games. Robin’s got a point… However, that issue was not going to stop enthusiasts in the real world from coming up with a solution. The force at which the diver lands is a problem, so we have to provide enough cushion to absorb that force. 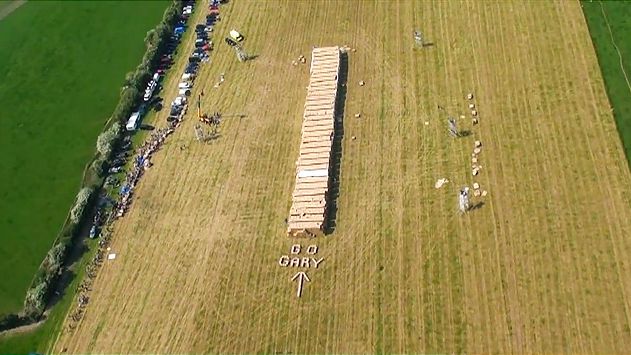 Despite the dangers, two men know a thing or two about landing safely without the help of a parachute. British stuntman Gary Connery safely landed in a wingsuit without landing on a crushable landing zone built from thousands of cardboard boxes. Another guy, Raphael Dumont, landed on a river. While doing this type of high-risk landing, it is important to ensure that the diver comes to the ground at a highly acute angle, just like an aircraft does, to reduce the impact while landing.

Although we still can’t glide from building-to-building, burst through windows, or safely land on the tops of cars, we can definitely soar through the skies like “The Dark Knight”!