Hanging upside down is a great way to hide from predators, such as birds and other dangerous predators, particularly during the daytime. It’s also the ideal position…

If Batman had to choose a place to retire, I would put my money on Bracken Caves, Texas. Every year, between March and October, over 10 million bats flock inside the dark abyss of the cave to roost. Venturing inside the cave, which is allowed, you will see every inch of it covered with bats, hanging upside down like cloaked vampires (although the bats that roost in Bracken Caves are not, in fact, vampire bats).

Doesn’t it look a bit weird? How anyone could sleep with their legs desperately clutching a branch is unthinkable. As it turns out though, bats have a strange knack for sleeping exactly like this, with their heads pointed down and their feet holding onto the branch of a tree.

We know that it happens, but why do they do it? 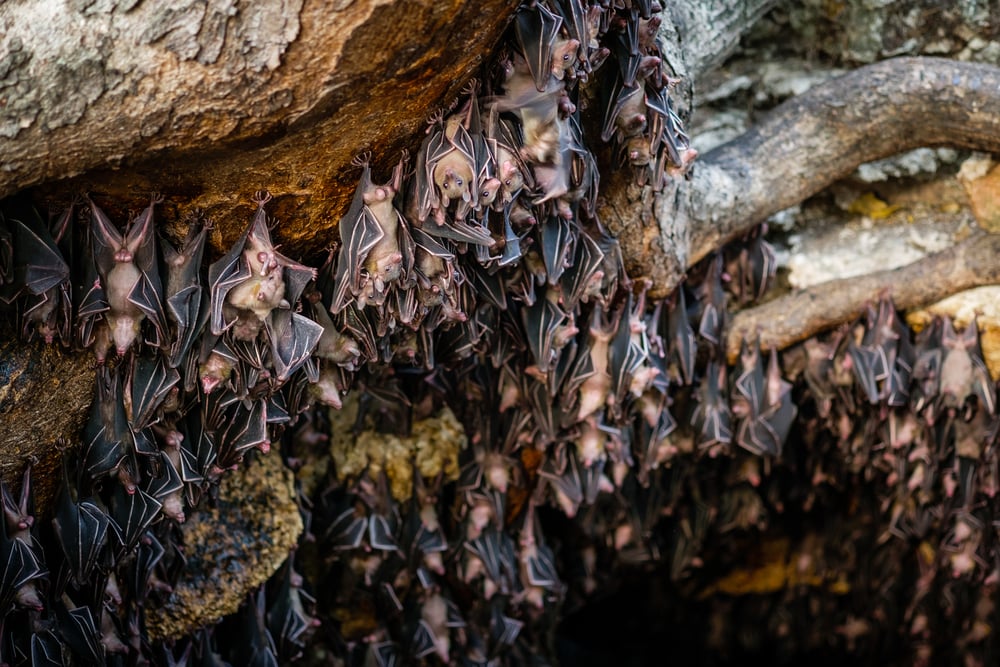 The Origins of Upside-Down Hanging

The mystery of upside-down hanging is intertwined with the mystery of how bats evolved flight. They are the only mammal capable of true flight, but there is very little fossil evidence for what a non-flying bat ancestor might have looked like.

The dominant hypothesis is that bats evolved flight from a mammal that could climb up trees, and possibly spend significant time there, hunting for tasty insect treats. Over time, this non-flying mammal began to take to the air, perhaps by gliding like modern shrews, or by some other evolutionary route as yet undiscovered. This tree-climbing, insect-eating, possibly flying mammal might also have preferred upside-down hanging.

A bat fossil discovered in Wyoming, United States supports this hypothesis. The group that studied the fossil found that this proto-bat might have been an upside-down hanger. Many modern animals that spend a portion of their life in tree canopies hand upside down. Monkeys frequently hang upside down using their tail or feet, sloths cling with their hind legs to branches, and opossums are famous for their upside-down tail hanging. 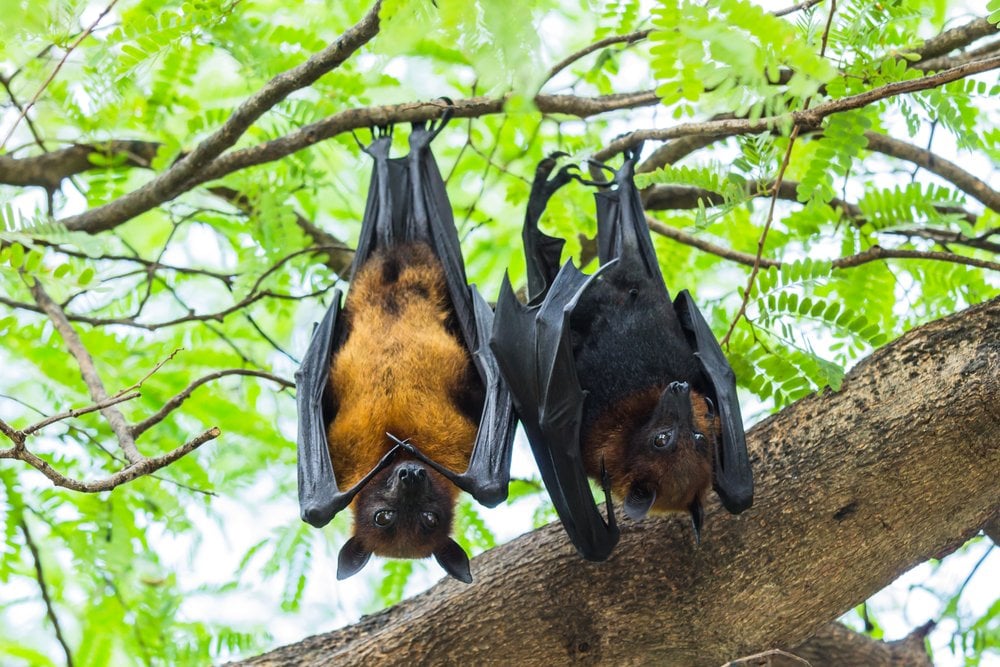 Both bats and bird fly, yet they do it in slightly different manners. Unlike birds, bats find it much easier to simply let go of the branch they are clutching and fall into flight almost instantly. Bats let go, fall a meter or so, and then gain enough momentum to glide away. Birds are more of the “jump and flap” type flyers.

Most bats cannot take off from the ground. Taking off into flight requires a lot of energy, which means that a creature needs powerful muscles that can generate such power. Bats, it seems, didn’t evolve flight that way. Instead of running and jumping like birds do, bats simply use their muscles cleverly to generate enough energy to power their flight.

To uncover how bats fly, researchers at Brown University X-rayed Seba’s short-tailed bats, a fruit bat, as they took off into flight. They found that bats have very flexible tendons connected to bones of the biceps and triceps that make their flying more maneuverable. This evidence overthrew the earlier notion that bats had stiff tendons. 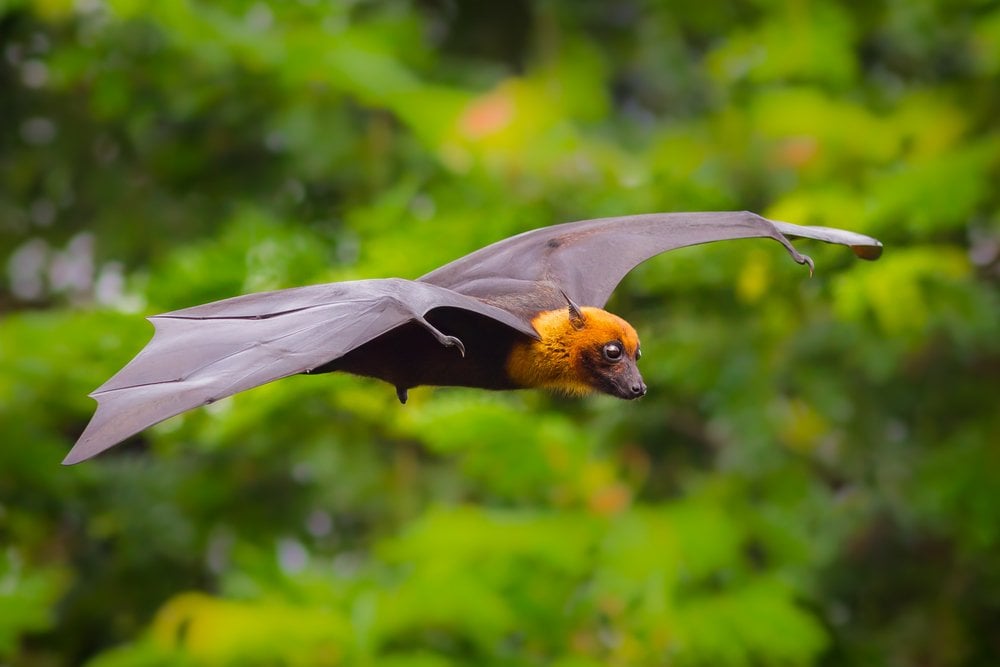 Hanging upside down is a great way to hide from predators, such as birds and other dangerous predators, particularly during the daytime. When they sense any danger, they just let go of the branch and are gone in a blink! They’re able to hide themselves by tucking away in places where most creatures are unable to look.

An effortless take off and flexible flying gives them the opportunity to make a swift exit. Without that, their running would be rather clumsy, since their wings—spanning from its arms to its legs—would get in the way.

This built-in safety from predators is also handy when bats hibernate or are rearing their young. High up, on the ceilings of caves and trees, not much can reach them.

Unlike many other creatures, it is found that for bats, being upside down is actually easier and more comfortable than other positions. In 1977, a paper published by authors D.J. Howell and Joseph Pylka looked at the biomechanics of why bats might prefer an upside-down lifestyle. They found that bat femurs weren’t very good at dealing with compressive stress, hanging upside down is easier then standing or sitting around. 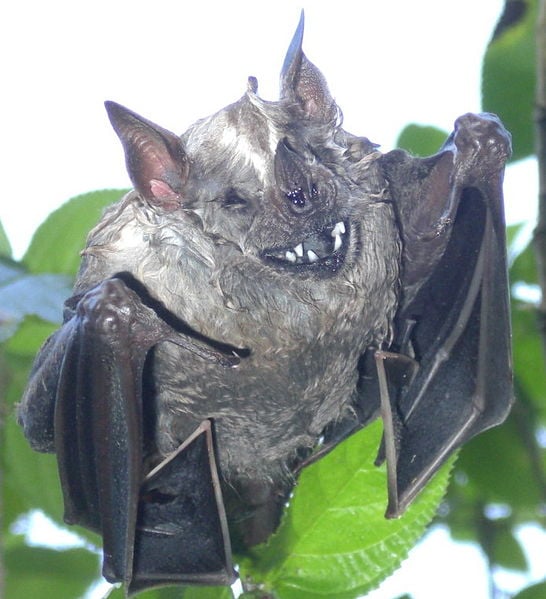 Bats belonging to the genus Thyroptera, about 5 species of them, have specialized suction cups under their wrists and ankles to stick to smooth surfaces. They don’t hang upside down. (Photo Credit : Hanson59 /Wikimedia Commons)

However, not all bats have adopted this topsy-turvy lifestyle. Bats belonging to the genus Thyroptera, about 5 species in total, have specialized suction cups under their wrists and ankles to stick to smooth surfaces. They prefer to stick to the inside of banana leaves, rather than ominous caves. The Madagascar sucker-footed bat takes a similar approach. It also has suction cups on its wrists and ankles that allow it to stick to smooth surfaces.

While a vampire might hang upside down just to give their victims a fright, and Batman might do it to look cool, for bats, the motive is still “up in the air”. This is simply their natural approach to life!