There is an old myth that a penny can derail a train. This is not true, as a penny is not heavy enough to change the path of a train.

As a child, I remember there being a lot of talk about the magical powers of the train and its tracks. Some people said that a train could convert a coin into a magnet. While this is false, it was an innocent and comparatively healthy notion.

Another popular adage, however, was that a penny placed on the tracks of a train could actually derail the train, which would cause massive destruction! Now that I’ve grown up, it’s time to explore and investigate the truth of this statement.

We say that a derailment has occurred when a train runs off its rails. But it does not always mean that it has gone off the track completely. Derailment can happen for various reasons such as collision with another object, an operational error, the mechanical failure of tracks, and the mechanical failure of the wheels. At times derailment has been caused on purpose to prevent more serious issues.

The issue is very straightforward. Essentially, there is a belief that an average penny, with a weight of no more than a few grams, can derail an entire train, which is more or less in the range of 200 tons (now, count the number of zeroes after converting 200 tons to grams). By the sheer numbers, it seems utterly childish to even consider that such a small piece of metal could affect a high-speed locomotive. However, since we are scientifically intrigued by the matter, let’s look at the odds.

Derailing can happen to trains and does happen for a number of causes. It may be caused by a technical issue, such as a faulty rail, cracks or gaps in the rails, or even human error. What happens is that the locomotive moves off the rails on which it is moving, leading to an accident – and sometimes a catastrophe. 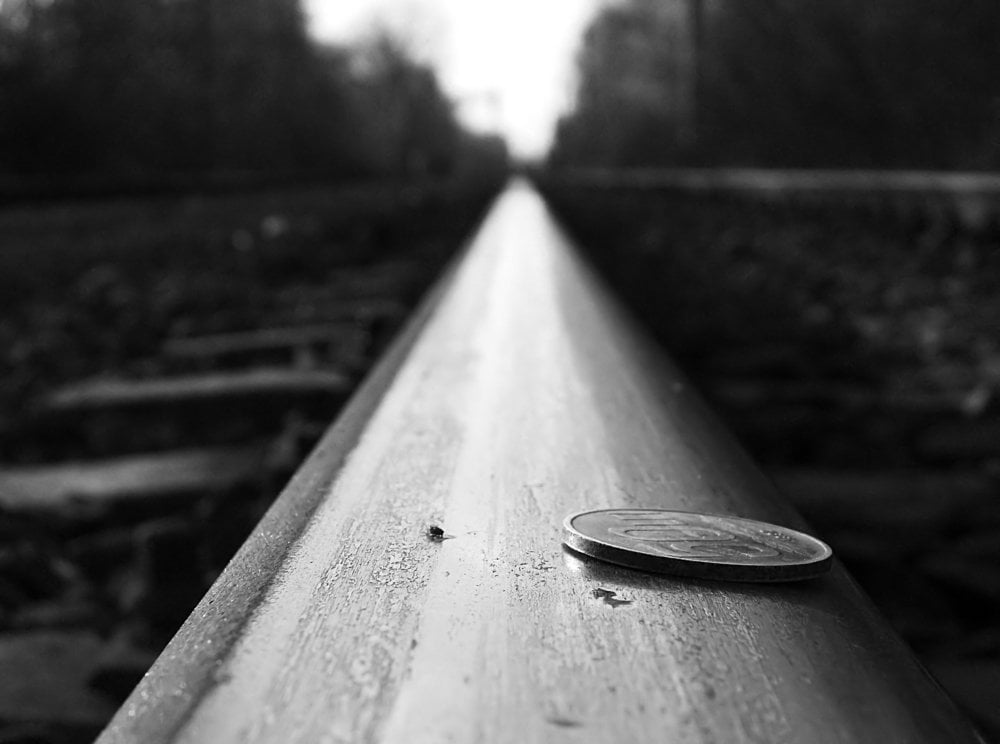 Obstructions lying on the railway tracks can also cause derailing. Some of the most common derailing incidents caused by an obstruction on the tracks involve snow, fallen trees (or thick branches), or vehicles.

Can a penny derail a train?

As far as a penny is concerned, its size is not nearly significant enough to cause a train to run off the rails. This certainty is based in mass and momentum. The principle of conservation of momentum comes into play. The principle basically argues that when two bodies with masses interact, the total momentum remains conserved.

In this case, the two bodies involved are the train and the penny. Now, as we saw, a train is thousands of kilograms and a penny is merely a few grams. Also, the train (the heavier of the two objects) is moving at a high velocity, while the penny is stationary. Therefore, the momentum of the moving train is much more than the penny. The penny is too light to impart any momentum of its own on the train – at least nowhere nearly enough to cause any change in the path of the train.

In short, the penny will have no effect at all.

As you might expect, the penny wouldn’t be of much use after a locomotive runs over it. In fact, the coin-crushing person would be lucky if they were able to detach the penny from the tracks, as the penny will often be flattened and stick to the track. In other cases, the penny is nowhere to be seen; it gets stuck to the wheels and simply gets taken away.

Still, people believe in trying things out, but we would argue that you sit this particular experiment out. There have been many unfortunate incidents when people tried to place a penny on the tracks and were injured or even killed. It’s better to stand at a safe distance and not go anywhere near the tracks to try this old myth out. The result will never change, but your life certainly can!