Bladeless fans amplify air flow, just like conventional fans, but they do not have outwardly visible moving parts.

The electric fan is one of the most mundane yet critical appliances in our daily lives. In the event of power outages, the absence of light is only a minor inconvenience as compared to the absence of flowing air. While the ergonomics of fans change to suit various needs (ceiling fans, pedestal fans etc.), the underlying design and principle remain the same.

However, what if I told you that there are fans without those commonly visible blades? They’ve actually been around for some time now, even though you might not be aware of them! 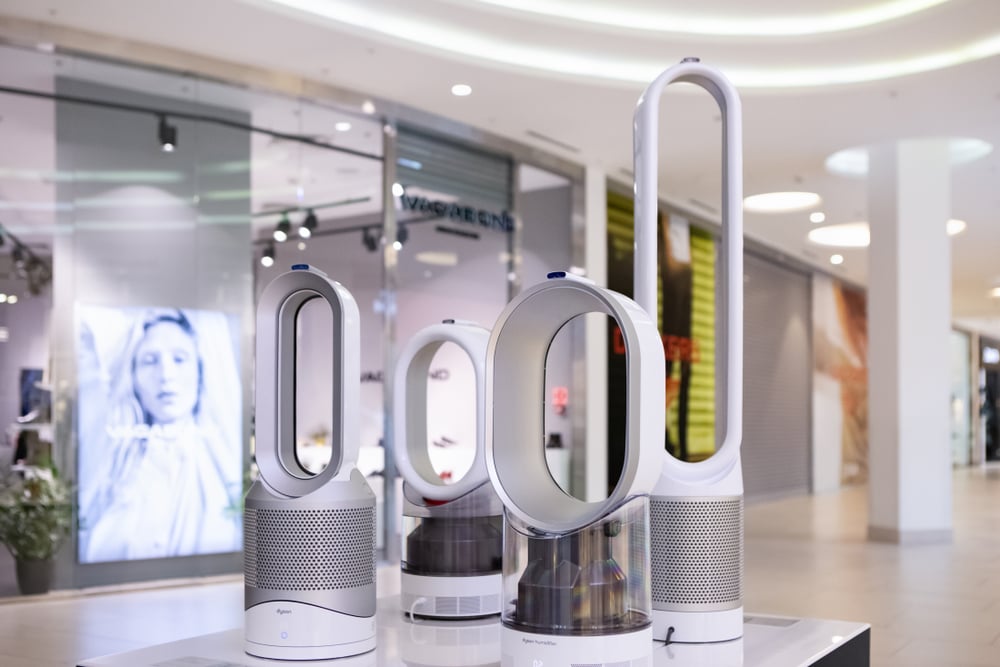 What are bladeless fans?

All fans work with the flow of air to concentrate or dissipate its supply in a given region. Quite unlike a conventional fan, which has a lot of visibly moving parts, a bladeless fan is a static contraption that looks more ornamental than functional. It is, however, based on a very clever design utilizing the magic of fluid dynamics.

Bladeless fans consist of a base with a special kind of turbine called a mixed flow impeller. The impeller has asymmetrically arranged blades that draw in ambient air from all directions. It is driven by an electric motor and the entire setup is encased in a cover with holes to let air flow into it. 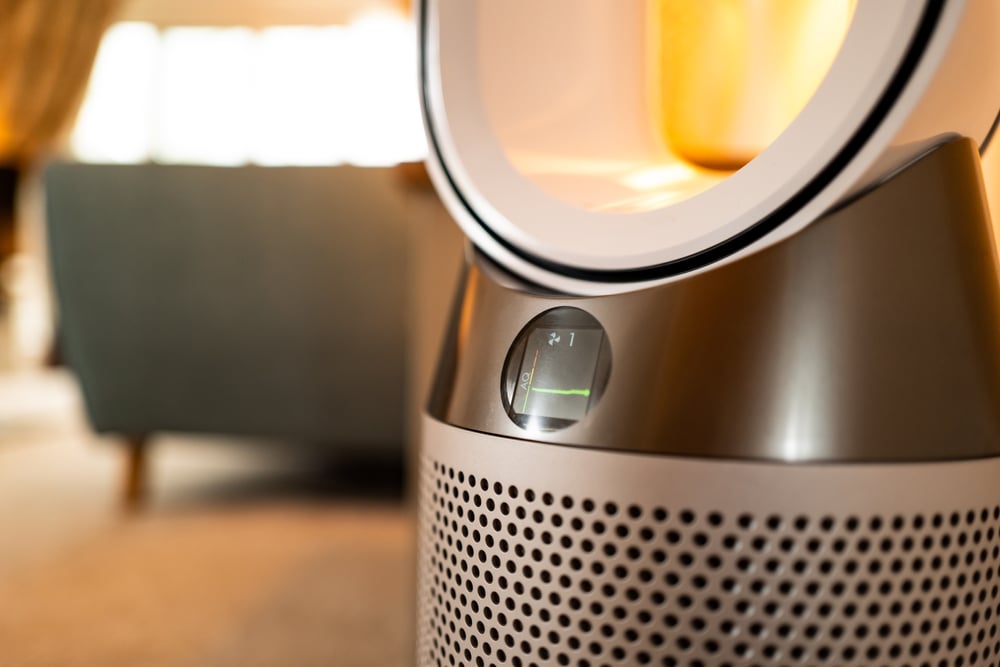 The perforated cover on the base of the fan allows the impeller to draw in air (Photo Credit : Nick Beer/Shutterstock)

The discharge frame or the ‘hoop’ responsible for providing the air flow to the room is mounted on this stand and has a slit around its inner circumference to let air flow out. This slit is a part of a hollow cross-section shaped like an aircraft’s airfoil.

Bladeless fans are also called air multipliers in proprietary parlance. This is because they leverage two very important phenomena to increase the amount of air passing through the hoop without necessarily drawing that air into the impeller. These phenomena are called induction and entrainment. Let’s try to understand each one in turn and see how they affect the final air flow.

Induction accounts for the bulk of air acceleration and multiplication that occurs in bladeless fans. In order to properly understand induction, we must understand Bernoulli’s theorem. This states that pressure and velocity are inversely related. Thus, an accelerating mass of fluid, in our case, air, will have lower pressure compared to a slower moving mass of air. 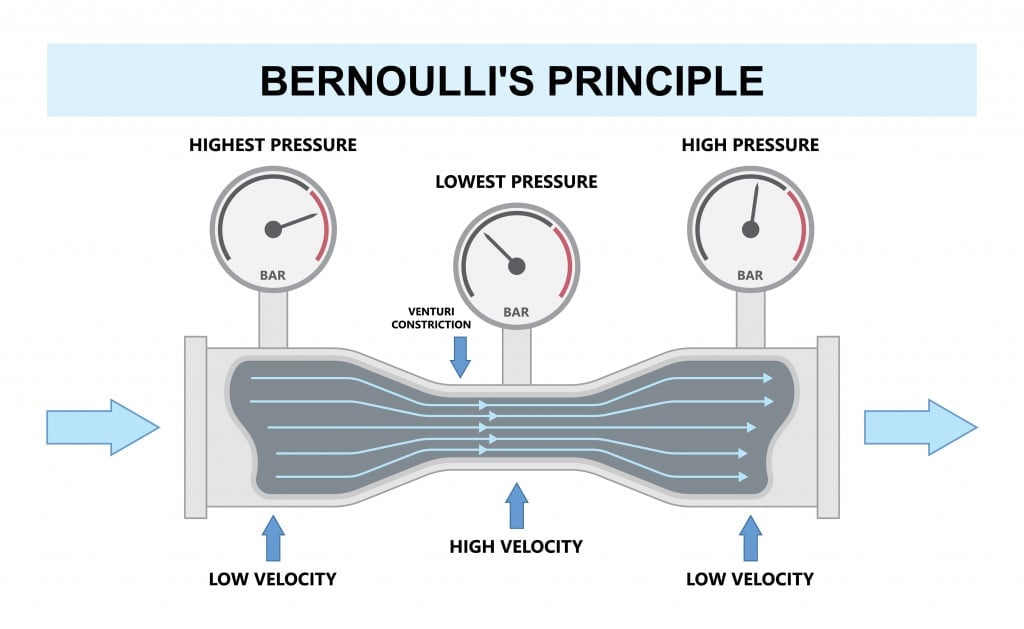 As per Bernoulli’s theorem, pressure and velocity are inversely related (Photo Credit : Pepermpron/Shutterstock)

In the case of bladeless fans, air from the impeller gets forced into the discharge frame. This discharge frame has a cross-section that is similar to an aircraft wing airfoil, by which lift is generated.

However, this cross-section is hollow and open-ended, very similar to a paper clip, allowing air to exit through the slit. When air enters the discharge frame, it accelerates outwards. This causes a reduction in pressure of the accelerated air mass. However, ambient air that is already present in the discharge frame annulus is at lower velocities and higher pressure.

It therefore pushes the accelerated air mass towards the surface of the discharge frame and follows its profile even upon exiting. This is known as the Coanda effect. You can read more on this here. 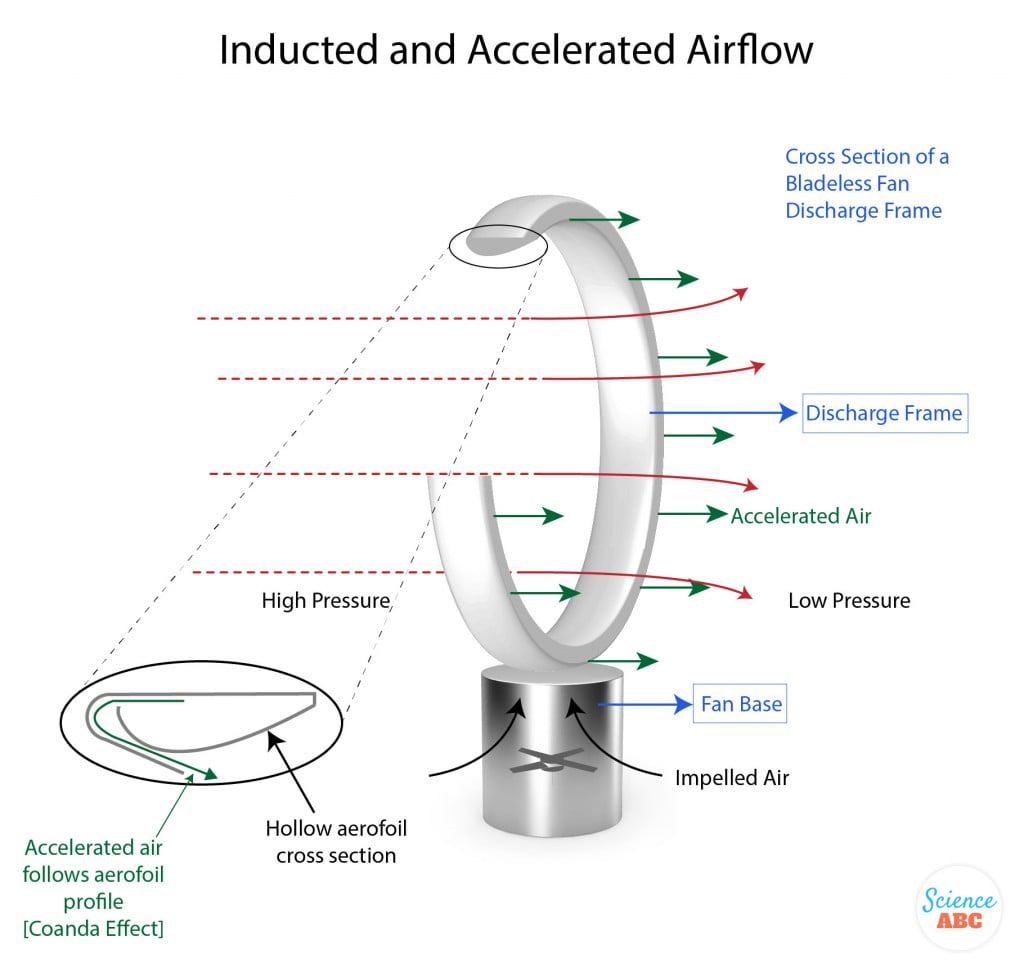 Dynamics of acceleration and induction

As the accelerated mass of air exits the slit, a ring of low pressure is created around the discharge frame. In order to equalize this pressure, ambient air from the room enters the ‘hoop’ from one side and exits from the other. This ambient air adds to the already accelerated mass of air that is exiting the slit of the discharge frame, in an area known as the mixed-flow region.

The air forced out of the discharge frame moves at a higher velocity as compared to the ambient air. It thus forms an invisible boundary with the ambient air mass. The air flow at this boundary, however, is not smooth. Instead, air flows in turbulent, swirling patterns in this region. 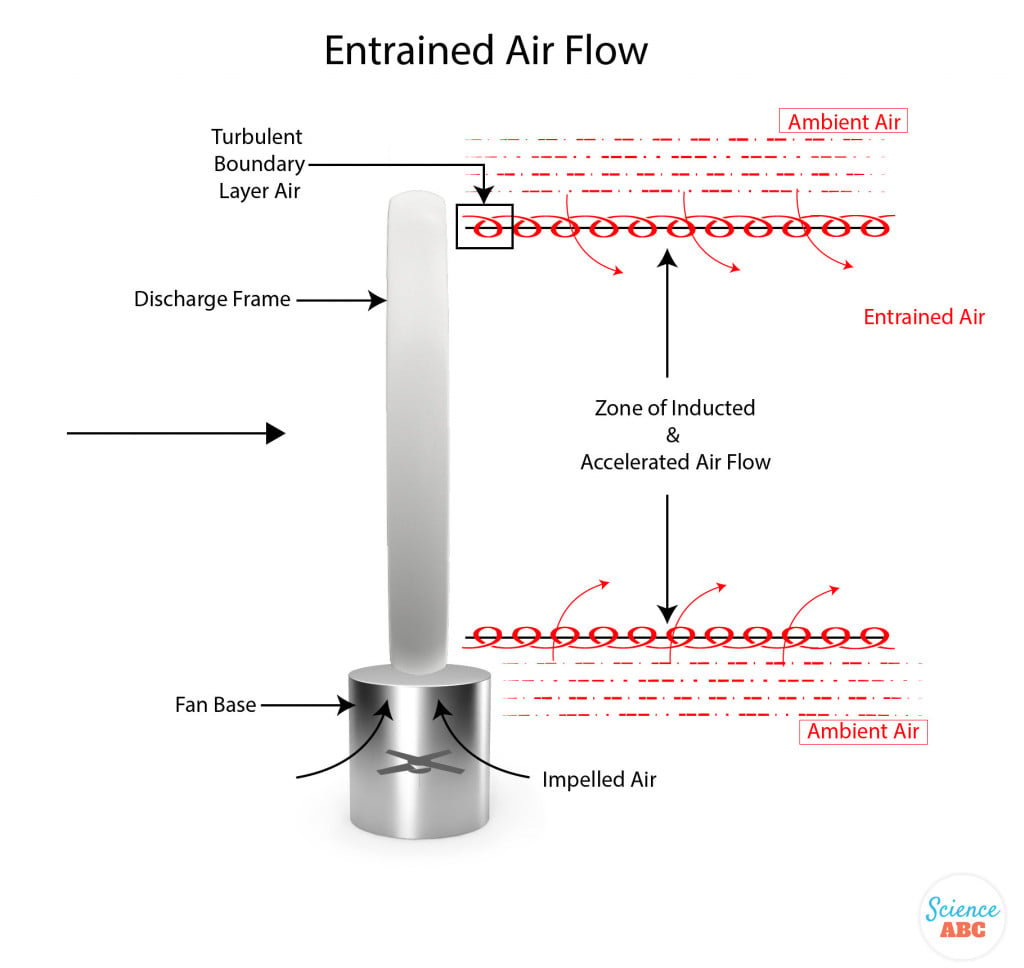 Such motion causes air to be drawn in from the ambient mass, into the accelerated mass that emanates from the discharge frame. This process is known as entrainment and further multiplies the amount of air flow.

Induction and entrainment occur simultaneously, and can cumulatively amplify the air flow by as much as 15 times the amount that originally entered the impeller. Changing various parameters, such as the design of the cross-section, the height of the discharge frame, and the power rating of the motor changes the air handling capacity of the fan. Bladeless fans are observed to be quieter and more energy-efficient than their conventional counterparts. 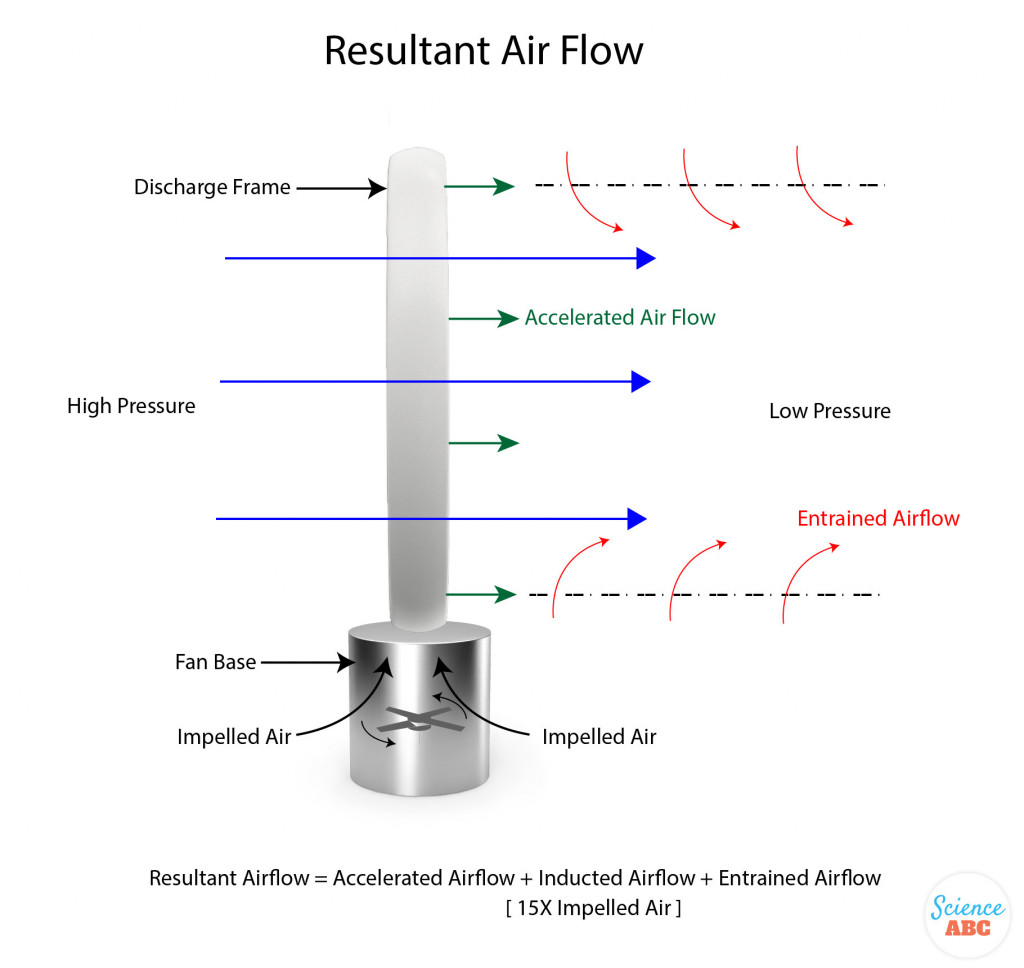 Bladeless fans are known as air multipliers, as they increase the volume by induction and entrainment

Advantages and disadvantages of bladeless fans

To their credit, bladeless fans are a much more stylish alternative to ‘bladed’ fans. The absence of exposed moving components adds to their safety in domestic applications. However, bladeless fans employ high-precision design and engineering in their components, such as the airfoils, mixed flow impellers and motors. At the same time, they are generally outfitted with remote control and IoT operations, making them more expensive than their conventional counterparts.

Is the bladeless fan truly bladeless?

Despite the tricky name, bladeless fans are not actually bladeless, as air is forced into the system by the impeller blades. That said, the moniker comes from the absence of visible components that are more commonly found in conventional fans. 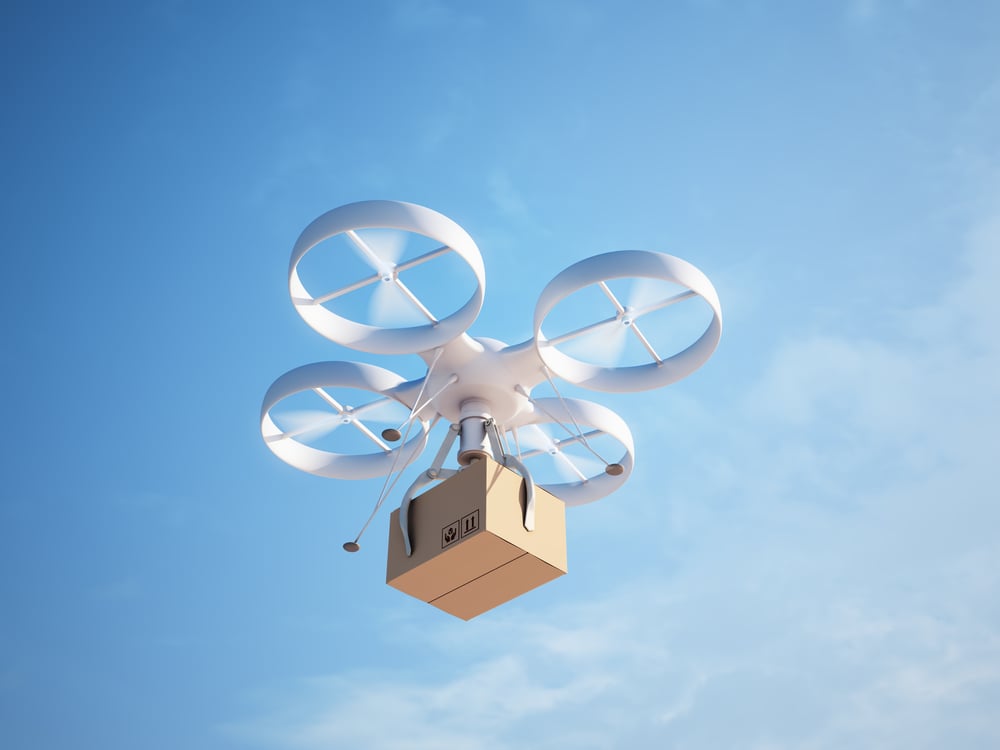 Bladeless fans have great potential for use in UAVs and drones, as their design makes them safer for handling (Photo Credit : Mopic/Shutterstock)

The potential for bladeless fan design to replace open blade designs shows great promise in high criticality operations like turbines and thrusters that can be used in aircraft, unaided aerial vehicles (UAV) and drones. So, is it possible for truly bladeless options to take over the market… only time will tell!