Strange observations of a shallow ocean floor that gets shallower at night was not the ocean floor at all, but rather a thick layer of fish. Scientists have named this layer the Deep Scattering Layer (DSL). The fish swim up during the night to eat, and are primarily composed of phytoplankton.

During World War II, scientists around the world were experimenting with new technology to help them win the war. Among such crucial inventions and innovations, such as the computer and the first atomic bomb, was SONAR.

SONAR had previously been used during World War I, and was especially useful for anti-submarine warfare.

However, scientists working on improving the technology spotted something strange during their tests; the ocean floor was much shallower than expected, only a few hundred meters from the surface. Even stranger was that the ocean floor appeared to come up to the surface at night. What was going on here? And what did it reveal about what happens at the bottom of the ocean?

First, we have to learn how SONAR works. 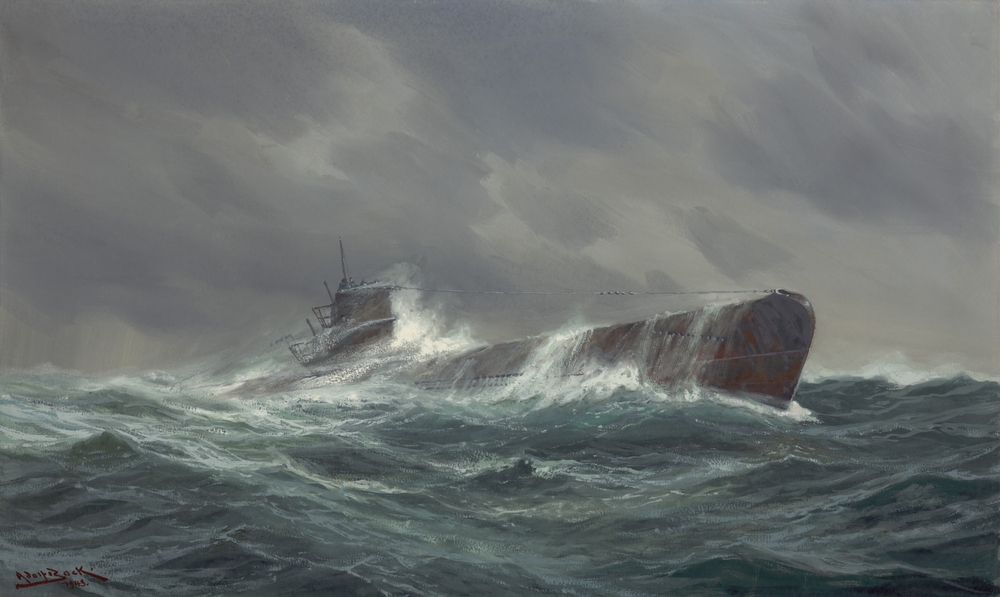 Submarines were on of the biggest threats in the marine environment during World War 2 (Photo Credit : Everett Collection/Shutterstock)

SONAR is the short form of “SOund NAvigation and Ranging”. This is a system created to help sailors and scientists find objects underwater.

This technique is performed by emitting a pulse of sound. This pulse hits objects and then gets reflected. The time between sending out the wave and receiving its echo allows us to determine the distance between the objects. Using this, we can create a map of objects and the landscape surrounding the ship. You can read about SONAR more in this article here. 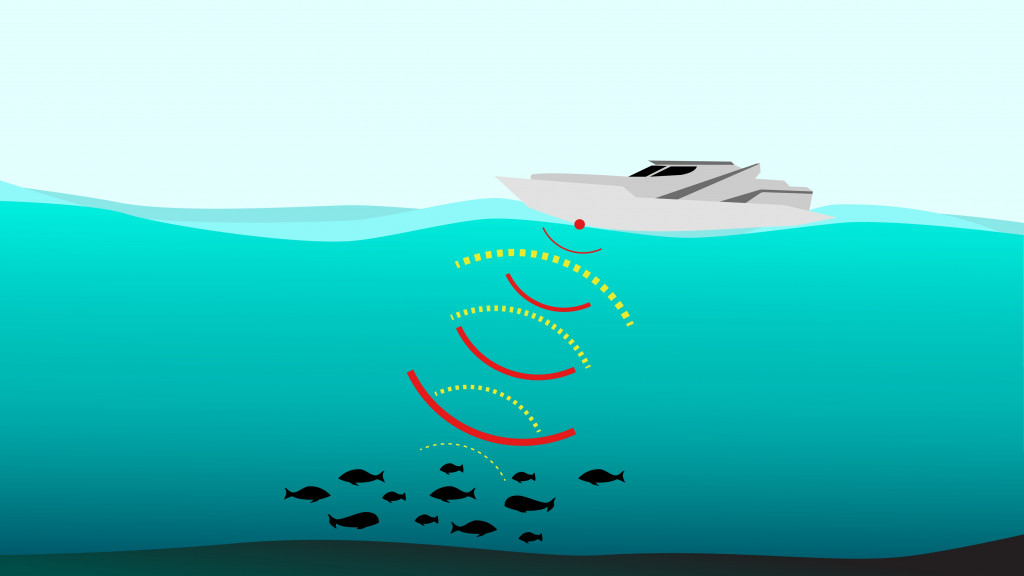 SONAR works by sending pulses of sound and receiving the reflection of the sound. (Photo Credit : Akarat Phasura/Shutterstock)

During World War II, SONAR helped sailors detect submarines, and today we use it to map the ocean floor and find shipwrecks.

SONAR is not useful for humans, but animals as well. Dolphins and whales use SONAR to locate food. When they emit these sounds, it hits all sorts of objects, including their next meal—fish. When the sound is reflected back, the whales can tell where the fish are. In those war-torn days of research, something similar was happening with the technology on ships.

An Ocean Floor Made Of Fish

The strange observations of a shallow ocean floor that gets shallower at night was not the actual ocean floor at all, but rather a thick layer of fish. Scientists named this layer the Deep Scattering Layer (DSL).

The DSL is composed of various sea creatures, but these are not just any regular sea creatures. These creatures evolved to live 300-500 meters below the surface of the sea. This is a region of very high pressure and low light. This gives rise to fascinating creatures, such as the lantern fish.

Also Read: How Do Satellites Help Us Catch Fish? 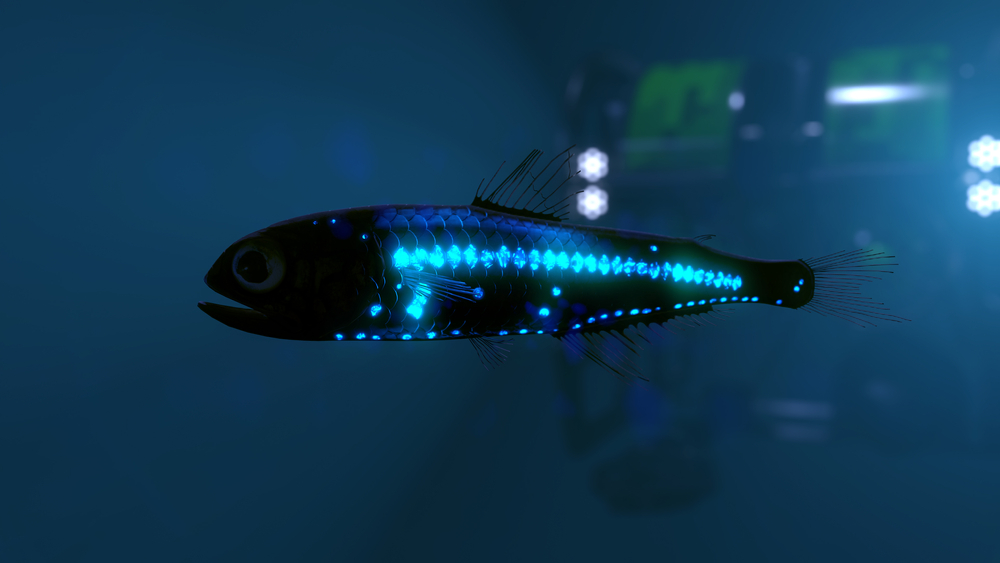 This is a lantern fish, and as you can see. it emits its own light (Photo Credit : 3dsam79/Shutterstock)

These fish evolved glowing bodies because they live where no light can reach, but why would they live in such a place to begin with? Precisely because it’s dark! Where there is no light, predators can’t spot them, but doesn’t glowing defeat that purpose?

There is a range of theories explaining why these fish glow in the dark. Depending on the type of fish, explanations vary from attracting prey to warding off predators. The patterns in which the glowing parts of the fish are arranged suggests that the lights help with camouflage.

However, there’s still one thing that doesn’t fully make sense. Scientists observed the DSL coming nearer to the surface at night. Why would it do that?

Moving To The Surface

If the darkness keeps them safe, it also keeps them hungry. Since there’s no light, there’s very little food in that zone. 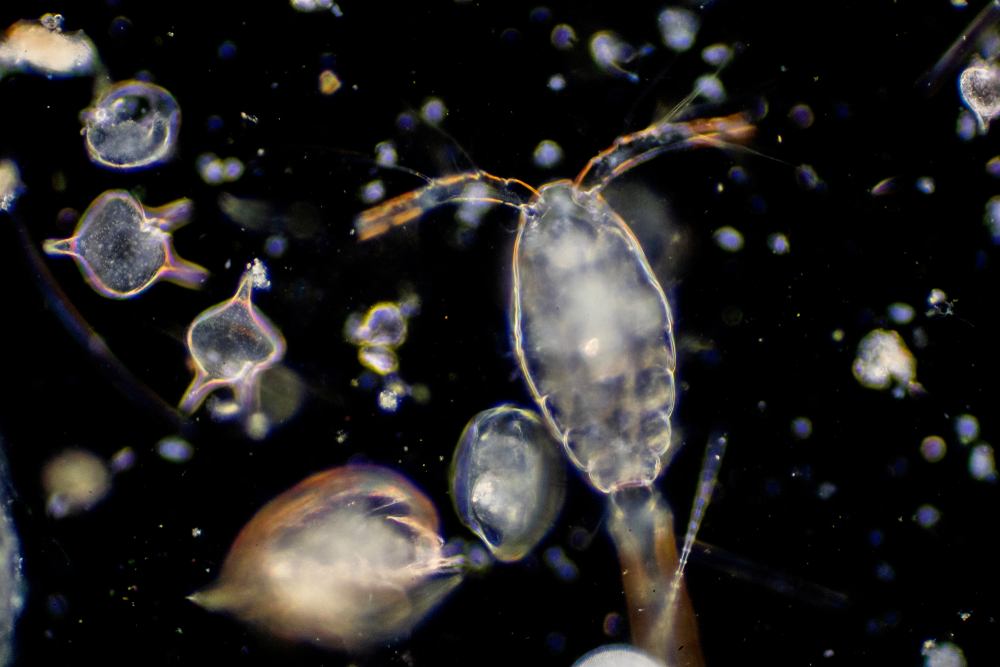 The term “Plankton” actually includes a range of creatures, like these slightly larger zooplankton. shih are microscopic creatures that feed on plankton (Photo Credit : Choksawatdikorn/Shutterstock)

The fish in the DSL live far from the surface of the water, but only when it’s bright outside. When it becomes dark, the fish that feed on plankton swim up to the surface for their evening meal. As the sun starts to rise again, these fish retreat back to the safety of the deep and dark ocean.

Since there is a daily migration across the vertical plane (from deep to shallow and vice-versa), scientists call this movement Diel Vertical Migration (DVM).

The DSL is extremely important to marine ecosystems. Most marine creatures reside in this area and play an important part in their food chains. Even their migration is important. DVM gives time for the phytoplankton to reproduce and helps replenish their populations, ensuring that the food source is never fully depleted.

Because the animals in the DSL live so deep and only come up to feed, it’s very difficult to study them. What are their reproductive behaviors? What other interesting behaviors do they get up to for the rest of the day? There’s still much to learn about this part of the ocean, and much to figure out regarding how to learn about it!