Blowholes are one of the least known dangers to humans in the areas near oceans? But do you know what a blowhole is? And what makes it so dangerous?

Try thinking of Mother Nature not as some gigantic being that controls all existence on the planet, but rather as a mere human being who experiences emotions, like happiness, sadness, regret and so on. Also, imagine if nature also experienced anger… if this was how nature really worked, then there would definitely be two natural events that depict it; volcanoes and blowholes.

Rocks are undeniably the strongest naturally occurring objects above the surface of Earth, but like many other natural things, rocks also undergo numerous changes over long periods of time. A blowhole, for example, is formed when sea caves grow landwards into vertical shafts, which can cause abrupt blasts of water from its gaping hole.

How are Blowholes Formed?

Bottom of the rock

A blowhole is actually the end product of a long geological process that can take thousands of years, if not longer! At first, the hydraulic action of the waves of the ocean crashing against land causes small fractures in the surface. The constant movement of waves at the bottom of cliffs (or any solid structure at the shore) eats away at the area around the crack and renders it weak enough to create sea caves at the bottom.

As if this wasn’t bad enough for the health of the rock, the movement of waves forces air into these small fissures, which are formed on the surface. As a result, the rock is placed under ever-increasing stress. Things become even worse during high tide, as more faults in the rock are created, more of the surface is eaten away and more air is forced into these fissures.

Process of formation of a blowhole (Image Source: http://www.geocaching.com)

The rock not only becomes weaker as time passes, but the land above the rock also undergoes geological changes. There is constant and gradual erosion of the upper surface due to various natural processes, such as weathering and chemical dissolution. Therefore, the upper surface is also considerably weakened over a long period of time.

The strength of a rock diminishes at two vital points; its top and its bottom. When both the parts are unable to endure the pressure of the trapped air below and the constant attack of the sea, part of the rock crumbles. When the conditions are ripe, i.e., when there is a high tide or a rough storm at sea, jets of water abruptly erupt out of the newly formed hole at enormous pressures. Some of the outbursts of these water jets can shoot up as high as 30 meters (~98 feet). 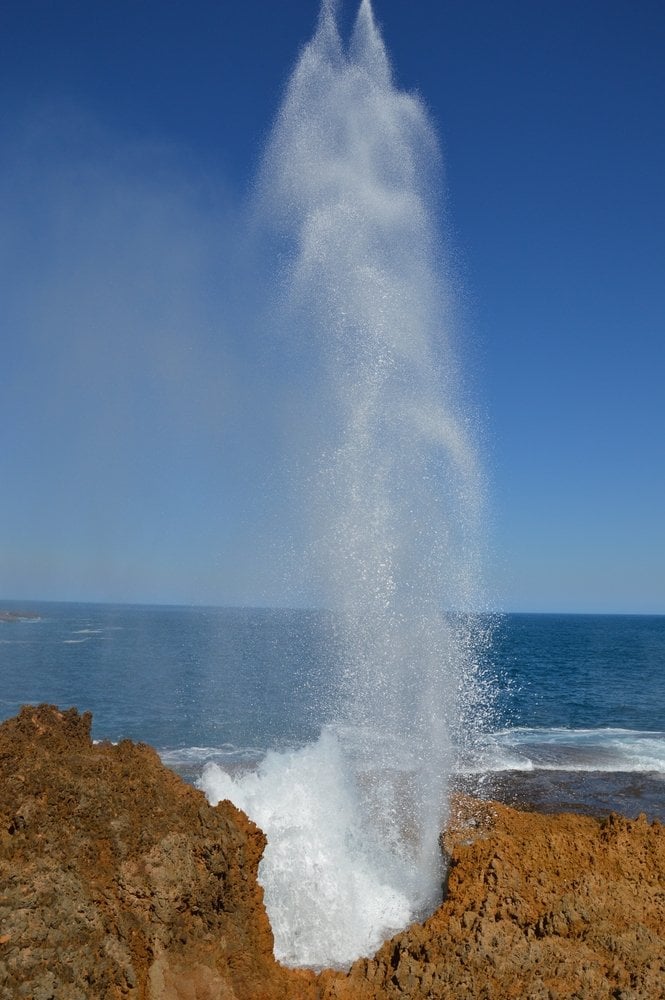 Some eruptions can be really high (Credits: panta rai/Shutterstock)

Some Known Sites of Blowholes

There are a few identified sites around the world that are notorious for their famous blowholes. These include Tiarei in Tahiti, Wupatki in Arizona (USA), Hālona Blowhole in Hawaii, Trevone in Cornwall (UK), Punta Banda Peninsula in Mexico, and Kiama in New South Wales (Australia).

Blowholes are not known as natural dangers, perhaps less than any other naturally occurring phenomena of such force and energy. What can make blowholes lethal, however, is that they erupt all of a sudden, giving absolutely no time to those people nearby to take any evasive action. There have been numerous accidents in the past due to blowholes, and there even have been some deaths too!

However, the regions where blowholes have been identified usually have warning signs installed near the rocks along the sea line to highlight the presence of blowholes that may erupt suddenly. So your best defense strategy against blowholes is to read those warning signs and keep a safe distance from any dangerous areas on the rocks.

Peeking inside a blowhole obviously isn’t the wisest choice, but if you wait long enough, you’ll be able to catch a glimpse of Mother Nature at her angriest from a safe distance!