The eggs of some sharks are made different. Instead of what one associates with eggs, the embryos are in pouches or sacs. Different species of sharks have different strategies when it comes to their eggs.

There are about 500 species of sharks around the world that show an astounding diversity in their reproductive strategies. They can reproduce sexually by laying eggs or giving birth to a live baby, while other sharks display the rare form of reproduction known as virgin birth (parthenogenesis).

Usually, when referring to an egg, we think of an oval-shaped object laid by female birds or reptiles that may contain a developing embryo. 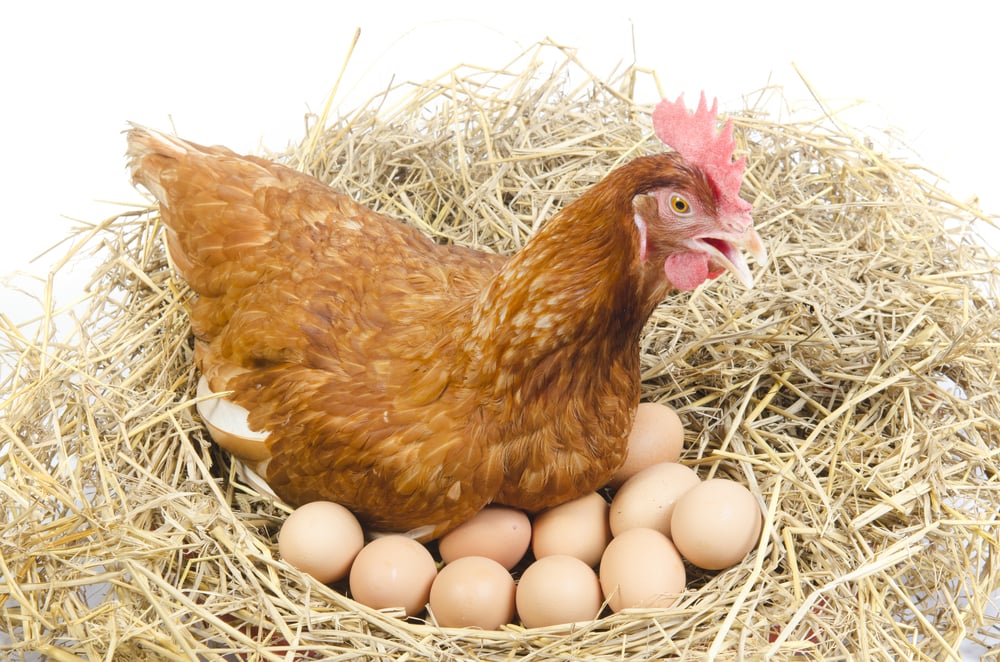 A shark’s egg is no ordinary egg. Some species lay an unusual looking “egg” in the ocean. Some eggs might look like a mermaid’s purse, while others look like a spiral conch shell. Apart from being aesthetically pleasing, the peculiar shape of the eggs does have a functional role.

How do sharks reproduce?

Sharks reproduce either by oviparity or viviparity. Animals that lay eggs that mature and hatch outside the body are oviparous animals. On the contrary, viviparous animals give birth to live animals that have matured within the female womb.

Around 70% of sharks are viviparous and the remaining 30% are oviparous. Normally, most oviparous fish species release their eggs into the water. The egg fertilizes outside the body by a sperm from a male of the same species.

However, upon fertilization, some species of sharks lay eggs with peculiar coverings. 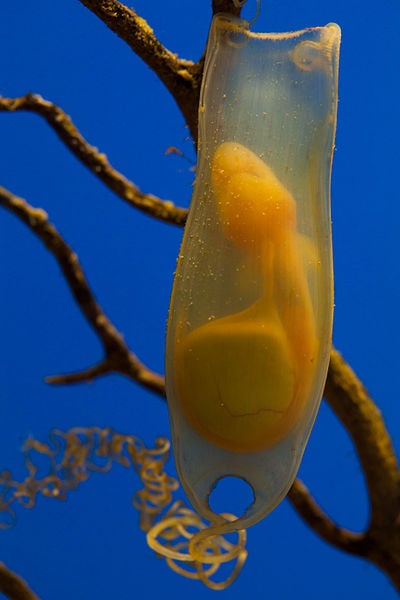 For example, the embryo of the catshark grows inside a long, pouch-like egg. Other oviparous species of shark with strange-looking eggs include bamboo sharks, zebra sharks, and bullhead sharks.

How is the egg capsule formed?

The formation of shark eggs is, in a way, similar to the process of packaging chips. First, the lower end of a plastic wrapper is sealed to create a pouch for the chips. After filling chips in the bag, the upper end of the wrapper is joined together, thus securing the chips from all sides. Much like a bag of chips, the formation of the egg case begins from the bottom. The posterior (lower) end of the egg case is formed, along with thread-like tendrils. The egg case is made of keratin and albumen secretions. 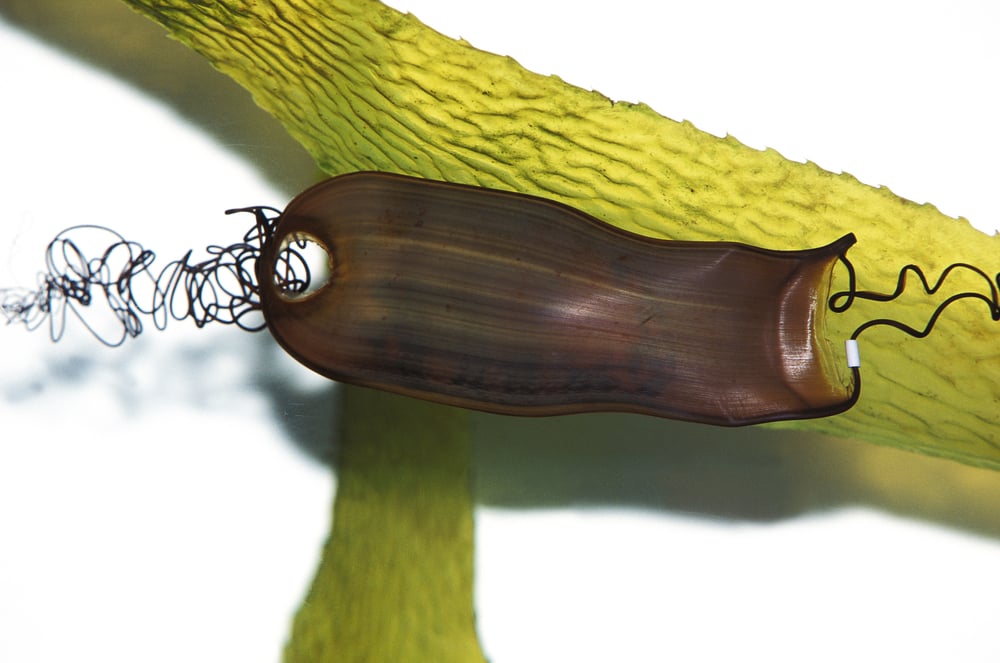 As the shell continues to form, it expands in size. The incoming egg is continuously coated with albumen and keratin as it moves along. Once it’s settled, a keratin sheet seals the anterior end, but the tendrils continue to form. The production of the egg case finally stops when the egg moves down the oviduct. There are small slits on the egg case to allow for respiration. 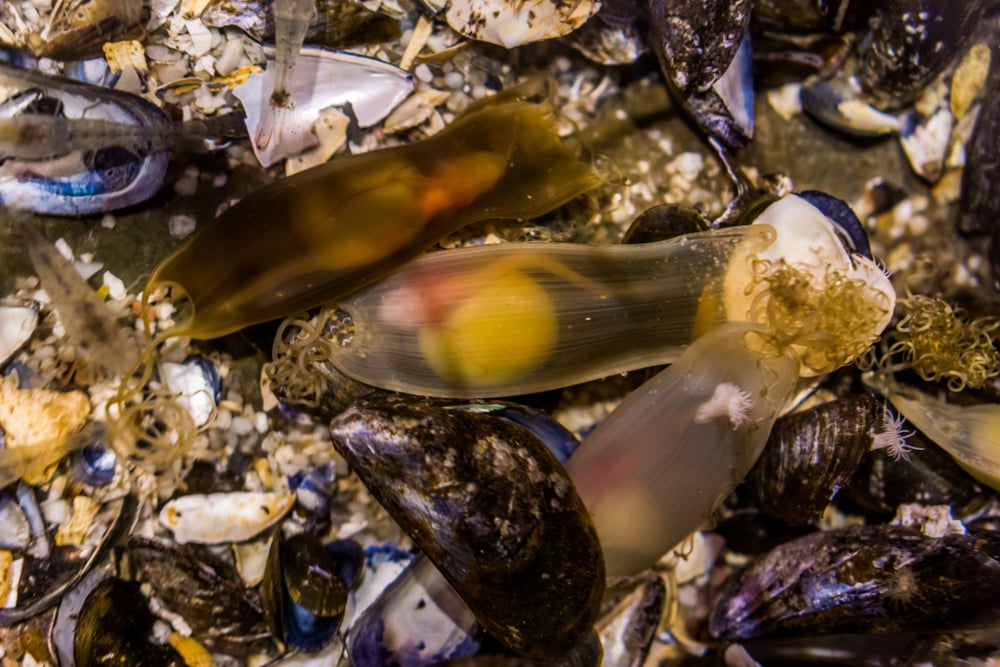 The color and opacity of the egg case depend on the egg’s age. A newly laid egg case is quite transparent, with a light olive-brown shade. As it starts to age, the color of the case darkens, as the opacity of the case increases. The maturing egg case also becomes tough and more resilient.

What is a mermaid’s purse? 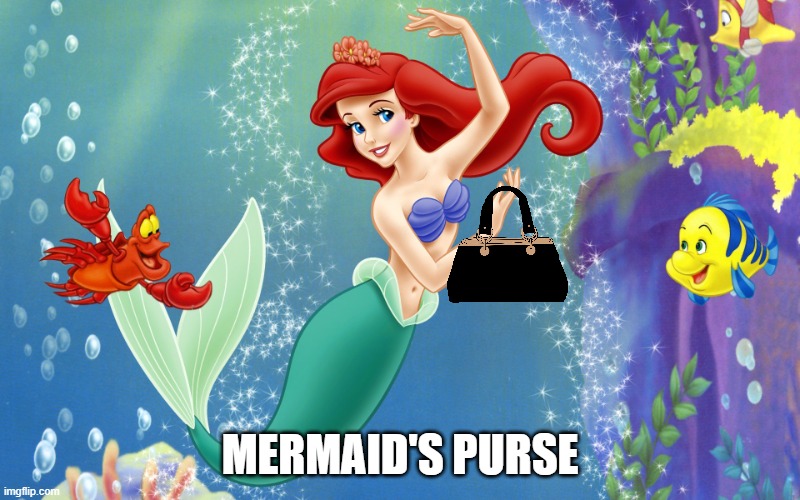 Yes, technically that image is of a “mermaid’s purse”, but that’s not the purse I’m talking about. Mermaid’s purse is a nickname for the egg cases of certain shark species, like the swell shark, carpet shark and angel shark. They are leather-like protective purses that contain a fertilized egg. A mermaid’s purse also contains a yolk sac that provides nutrition to the fetus. Usually, the egg capsule contains a single embryo, but there are multiple embryos in some egg cases.

The mermaid’s purse is sealed from all sides, but has four openings that allow the young shark to breathe. These openings are known as respiratory slits. Some have long tendrils attached to them. The tendrils act as anchors by tangling up with the algae and seaweed, which prevents the egg from washing away.

A few shark species have egg cases with a horn-like structure on each side. Because of this, such egg cases are sometimes called a ‘devil’s purse’.

What is a spiral egg?

Bullhead sharks and horn sharks have an auger-like egg case. It is conical in shape with spiral ridges and curly tendrils suspended at the bottom of the egg. Horn sharks can release six or more eggs into the water at the same time. The egg cases are heavy and slowly sink to the surface of the ocean.

The mother then carries the egg in her mouth and screws the egg into the crevices of rocks to anchor it well. They do this to protect the egg from washing away. They also have tendrils to provide additional support for the egg. 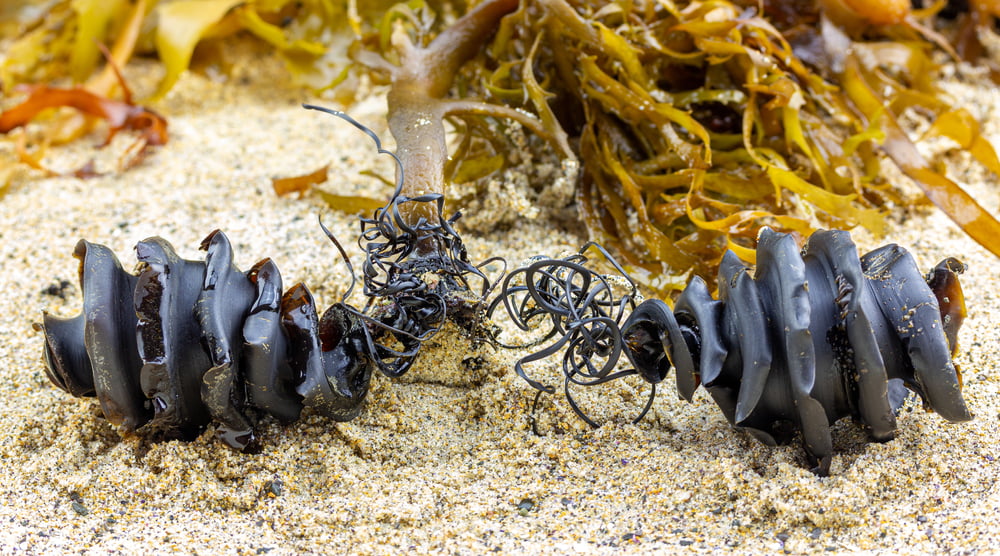 Unlike other animals, horn sharks don’t look after their eggs. They take off soon after laying the eggs, leaving the pups on their own. However, as a motherly gesture, they do provide the growing fetus with a lunch box. The egg case contains a yolk sac that provides nutrients to the developing embryo.

The Australian Swell shark (or draughtboard shark) has extremely eye-catching eggs. They have a flask-shaped, orange-yellow egg case with 19-27 transverse ridges and tendrils.

Other shark eggs look like fancy artifacts; the Australian ghost shark’s egg case is initially golden yellow, but the capsule turns black as the egg matures and nears hatching.

This can be dangerous, as predators passing by may get a whiff of the baby shark. Fortunately, the pup develops the ability to sense the electric fields of a predator. They cease their respiratory gill movements and freeze when they feel a threat approaching, effectively saving themselves from danger.