Did you know that a honey bee can be an expert at holding its liquor? Studies have shown that worker bees can be predisposed to alcoholism and can consume sugars with ethanol concentrations as high as 20%.

Honey bees are well-known performers of the “waggle dance”, a form of dance language the bee uses to communicate with its fellow friends, although since they’re worker bees, let’s call them colleagues. However, there’s another move you’ll see a bee do when it occasionally guzzles some fermented nectar, gum or fruit punch, and then clumsily flies out of the flower bar. At that point, it’s pretty evident that it’s drunk!

Yes, honey bees can be experts at holding their liquor, which sets them apart from other invertebrates. Additionally, studies have shown that worker bees can be predisposed to alcoholism and can consume sugars with ethanol concentrations as high as 20%.

Honey bees are a keystone species in the ecosystem (Photo Credit : Serenko Natalia/Shutterstock)

When Flowers Turn Into Microbreweries

To begin with, flower nectars don’t normally ferment. Their sugar concentration is high, which does not allow any microbes, such as yeast, to grow, so the nectar remains as it should. Come rainfall, and this perfect little mechanism goes haywire. The nectar starts to absorb moisture and thus gives way to yeast, which can now turn nectar into booze.

Rainfall and humidity can skyrocket during winter, but luckily, bees avoid foraging at this time, as winter means short and cold days. Autumn and spring, however, become ‘happy hours’, as the warm climate can be interspersed with humidity, and the rate at which nectar ferments can increase.

Bottlebrushes, Lemon-scented gums and Banksias, among others, treat their visiting bees to some unexpected day drinking. White gum, otherwise known as the Wandoo tree’s nectar, is reputed to cause death in its visitor bees due to excessive fermentation.

What Effect Does Booze Have On Bees? 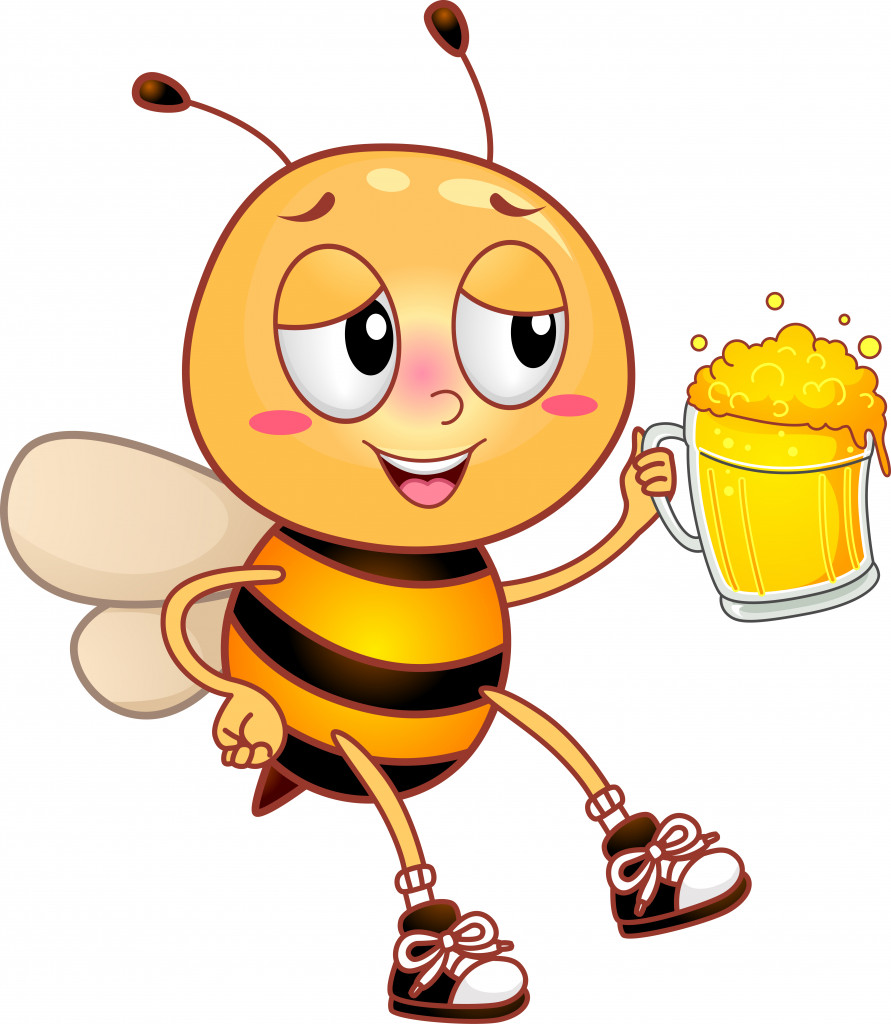 When bees approach a flower as they normally would and drink their fill, little do they know the kind of nectar that remains enclosed in the flower. Getting drunk on a cocktail of bottlebrush nectar sends the bee’s brain into a spiral. Ethanol belongs to a group of chemical substances that includes other toxic plant biochemicals. Upon fermentation, these chemicals become more pronounced and affect the bee’s brain. If present in excess, they can even be fatal.

Scientists estimate that alcohol can cause hangovers in the bees that last as long as 48 hours. A neurotransmitter (signaling molecule secreted by brain cells) called octopamine, gets affected in the process. This makes the bees aggressive, negatively affects their foraging, and messes with their power to discriminate between odors.

They become disoriented, zig-zagging about in the air, until they hit an object and end up sprawled out on the ground. Many die from intoxication.

Studies conducted on bees has shown that alcohol consumption has a similar affect on bees as it does on humans. Their blood ethanol level shows a spike as they become more and more drunk. They move much slower, and as they became more intoxicated, they became less mobile and tend to turn upside down.

It’s interesting to note that drunk bees also tend to stick their tongues out. Whether it continues to wobble about in the air or lie on its back and wiggle away depends on the level of intoxication it has reached. If they are mildly drunk, they continue to fly; if they’ve had a little more than they should’ve, they sprawl themselves on the ground. Unfortunately, if they’ve gone all in and gotten drunk against their better judgment, they will lose their way back home and eventually die.

No Drinking And Buzzing

Drinking may be socially acceptable in human societies, but in the world of bees, it is strictly prohibited.

When inebriated or drunken bees somehow manage to stumble back home to their hives, they are greeted by their guard-like sisters at the entrance. If they fail the ‘breath test’, they get ‘bounced’ to the curb! Research shows that the guards sense something fishy in the way drunken bees ‘waggle’ and they immediately throw them out of the hive as punishment.

This type of strict bee society doesn’t tolerate any funny business amongst its workers, and violators of their no-booze rule will have their legs bitten off. Such damnation serves as a good lesson to other bees of the colony. This act of the guards is somewhat justifiable because, if the drunken bees’ nectar were to be turned to honey, it could potentially paralyze the entire hive.

All the poor worker bee does is work for its short and limited life, but any kind of enjoyment—be it laziness or alcohol imbibing—somehow leads to its inevitable death. 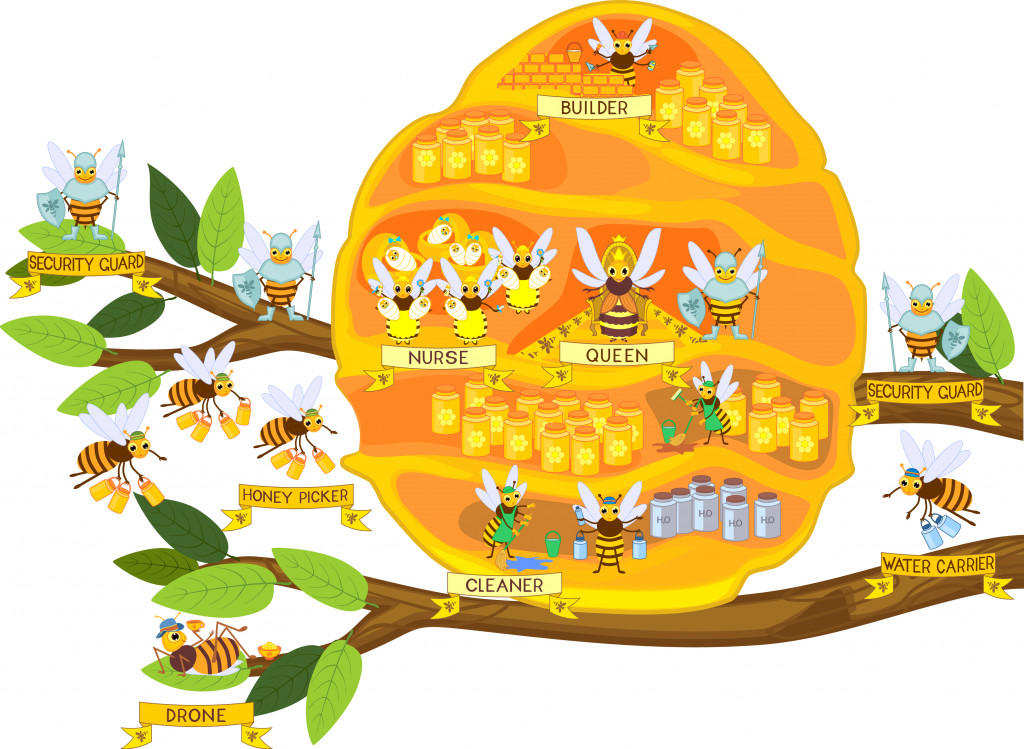 Scientists think that since bees behave very similar to the way humans do when they’re drunk, that bees can act like research models to study alcoholism and its effects. In fact, bees have been given a drug that prevents drinking called Antabuse, which has worked its magic on bees as well as it does on humans. Today, bees are even being used in some anti-alcohol drug test phases, before human trials begin.

Aside from bees, birds, bats, butterflies and even tree shrews are often seen becoming drunk on fermented foods.

Flowers that bloom in late autumn or early winter are to blame for the rise in bee drunkenness. During these months, the water mixes with the sugars in the nectars, causing them to ferment. Alcohol causes bees to fly in no particular direction, meaning that they are no longer capable of performing their bee duties properly. Drunk bees face serious punishment and torture from their hive mates. There’s no grounding for these bees, they’re straight up banished from their homes, or physically maimed.

Finding its roots in Greek, “drunk” means “honey-intoxicated.” Wonder where that came from! 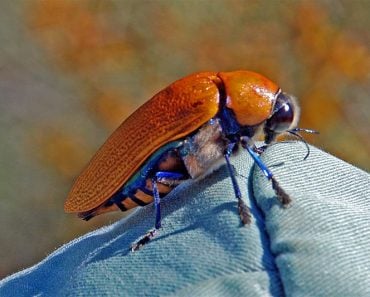