Self-driving cars or autonomous vehicles are classified into various levels based on the level of automation built into them.

Instead of a self-driving car, why not take the bus, you might ask. As you likely know, automated connected systems are no longer restricted to factories. They continue to percolate and expand in the daily thoroughfare of our lives. Gone are the days when owning and driving a car was a matter of privilege afforded by a select few. In the pursuit of greater productivity, it is only natural for us to delegate mundane tasks to automation. This paradigm is now extending to driving vehicles.

What Is Autonomous Driving?

Autonomous driving is the technical term for self-driving cars. While the idea of a moving car with a guy asleep in the driver’s seat might seem spooky at first, it is no longer a figment of wishful imagination. Autonomous driving has developed in stages and is being deployed in a phased manner in order to integrate well with other ‘human-driven’ vehicles on the road. Let’s explore each of these stages.

Based on the amount of human assistance required to drive a car, regulatory bodies identify 6 levels of autonomous driving.

Driving is a combination of steering (lateral control) and speed (longitudinal control). To what degree a car is automated depends on its ability to exercise these controls independently of the driver. Ranging from fully manual to fully automated, these levels are explained in detail below:

Level 0 vehicles are the most prevalent vehicles on the road today. The onus of driving the car as well as responding to any hazards that may come along the way rests solely with the driver.

Modern vehicles have features, such as sensors and cameras, that alert the driver towards instances of proximity, deficit of attention or even uncontrolled departure from lanes. However, they cannot take over from the operator to drive towards perceived safety.

This is the most commonly found level of automation available to modern-day vehicles. In such systems, the control of the vehicle lies primarily with the driver, but is supplemented by the built-in systems if required. Some examples include adaptive cruise control and parking assistance, where the driver is responsible for steering and speed control, respectively. While Level 1 automation was initially available only in higher end vehicles, this useful technology has now trickled down to the mass market.

Partial automation is the maximum level of automation known to modern-day road legal vehicles. Often referred to as ‘hands off’, this system takes control of the steering and speed of the vehicle. The driver, however, cannot completely divert his attention to other activities, as he must remain observant and assume control of the car if the situation calls for it. A common example of Level 2 automation is Tesla Motors’ autopilot mode. The autopilot mode in Tesla cars is an example of level 2 automation (Photo Credit : AlesiaKan/Shutterstock)

Conditional or ‘eyes off’ automation is often considered to be actual autonomous driving, as control of the vehicle is shared equally by the driver and the system. The driver can choose to focus on other tasks, knowing that the car will take reliable evasive actions if the situation demands it. However, Level 3 protocols are currently restricted to routine conditions, such as pulling out of a parking lot, or in stop-start traffic.

Certain conditions, such as arduous terrain, inclement weather and even highly fluctuating speeds call for human intervention. However, regulations do not permit such vehicles to operate on roads, as the technology is still in its nascent stage

Also known as ‘mind-off’ automation, Level 4 closely overlaps with Level 3. In this level, the systems are well versed with most adverse conditions and can function normally without human intervention, in most cases. If the system finds itself unable to extract itself from any situation, it can communicate with the driver to intervene. In the event of the driver not responding to the vehicle’s override request, the vehicle is capable of securing itself safely until further action is taken.

Level 5 automation is the ultimate objective in autonomous driving. A Level 5 autonomous vehicle fully replaces the driver and consequently, all driver controls, including the steering wheel, accelerator and brake pedals. It is not only expected to communicate with its passengers, but also with fellow vehicles on the roads to chart out the most optimal travel routes, without requiring any manual intervention. Since Level 4 and Level 5 automation are devoid of human assistance, their most economic application is in high certainty environments.

The concept of autonomous driving is based on the elimination of human intervention to drive any vehicle in the first place. This seeks to eliminate road inefficiencies arising due to driver error. 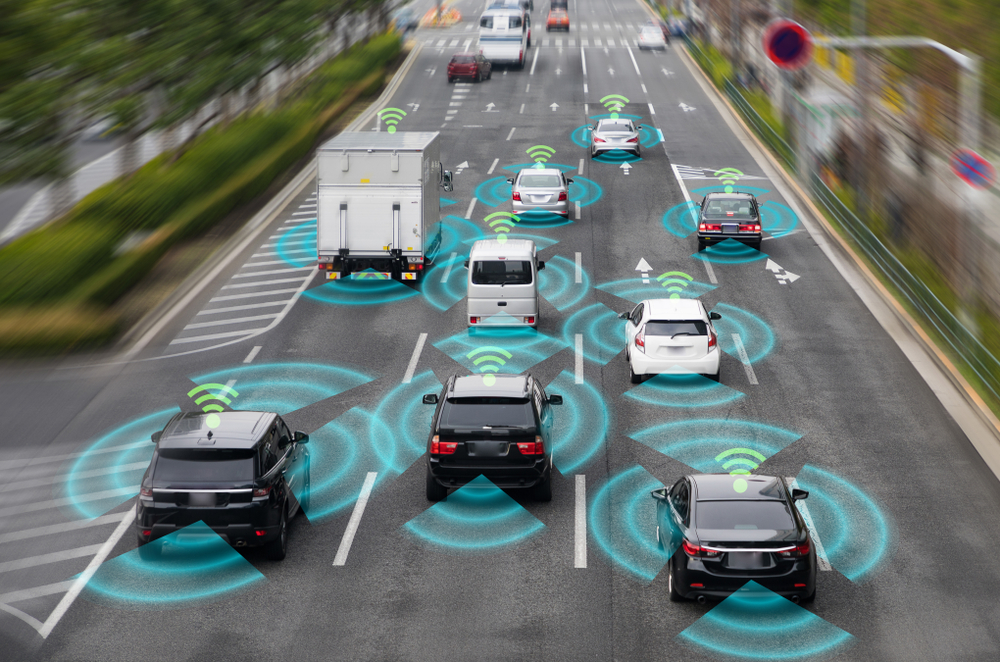 Autonomous driving will depend greatly on connectivity with other vehicles and passengers (Photo Credit : metamorworks/Shutterstock

Autonomous vehicles are being built on electric platforms with connectivity built into them. Apart from the obvious benefits, such as a reduction in road accident casualties, better traffic management, and even information-based vehicle pooling, autonomous driving shows great promise in industrial applications.

An excellent case study is the shipping, mining and construction industry. The introduction of autonomous driving capabilities greatly improve the ability to operate in hazardous conditions without posing a risk to human life. The implementation of machine learning will ensure the seamless integration of autonomous vehicles with traditionally driven vehicles.

While not being a desperate need, autonomous driving is the way forward. Like traditional vehicles, it requires an ecosystem to function in the most efficient way. Such infrastructure is very difficult to establish at the outset, especially in most developing nations. Post-deployment, adaptation to local traffic conditions also poses a challenge, thereby creating safety issues for motorists. At the same time, humankind will be faced with a moral dilemma arising from job losses of the many people who are dependent on driving for their livelihood.

Whether we switch to a completely autonomous system or coexist with traditionally driven vehicles remains a mystery that only time will tell!