A professor in a tweed jacket is standing at the front of the lecture hall, rambling on about chromosomes, the Neoclassic period, or geometric theorems. Several heads around the classroom begin to bob and jerk within the first fifteen minutes. An hour later, before the dismissal bell rings, nearly half the class is in a state of stupor – some sleeping, others holding their heads up, fighting back their drooping eyelids. 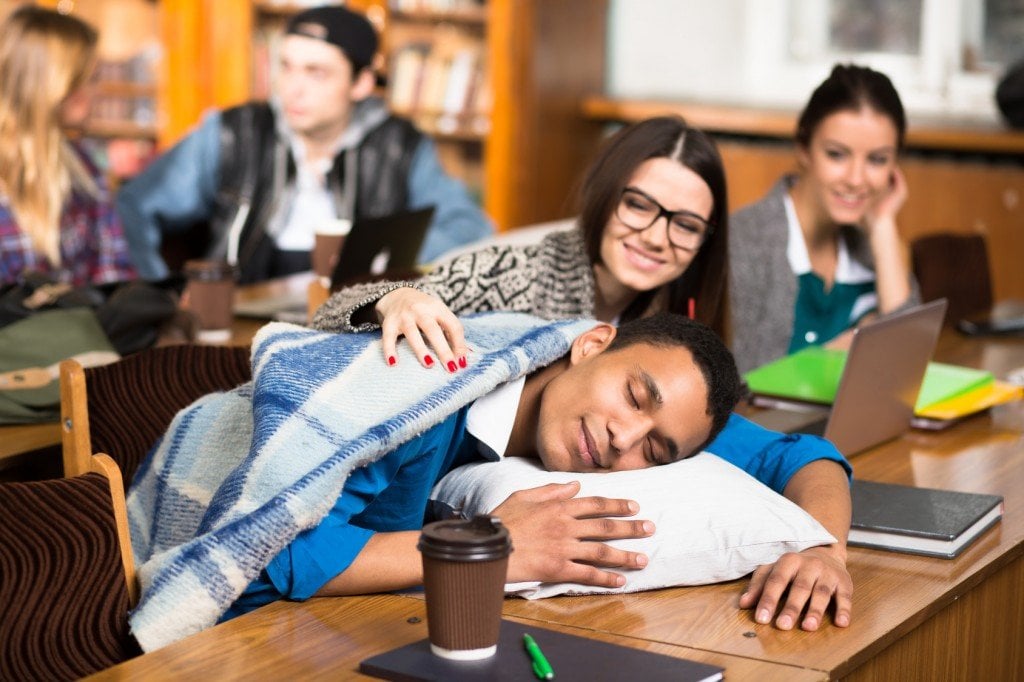 Every College Student at some point, minus the pillow (Photo Credit: Svyatoslav Lypynskyy / Fotolia)

This can’t be encouraging for the professor doing his best to educate his students, and probably isn’t good for the learning process either. The question is, why is fatigue such a common companion to boring lectures?

There’s no denying that we humans are creatures of habit, and one of our favorite daily habits involves cuddling up in a warm, dimly lit room and laying our heads down for a good chunk of sleep. No, that isn’t a reference to your college lecture hall, we’re talking about our bedroom. Our body gets used to certain environmental cues and responds to them naturally, so when we’re sitting slouched down in a comfy chair, near the dimly lit rear of an auditorium, our body associates this with our typical sleep pattern, and lets our body drift off to dreamland.

However, there is a more scientific element as well. Research has shown that blue light naturally stimulates our mind and tells our body to wake up. This may be indirectly linked to the color of the sky in the morning – the typical color infiltration that starts our day. Blue light affects a very small region of the brain called the suprachiasmatic nuclei, a bundle of powerful nerves that regulates our sleep cycle – like a built-in alarm clock. Blue light essentially stimulates that area of the brain like a strong cup of coffee. 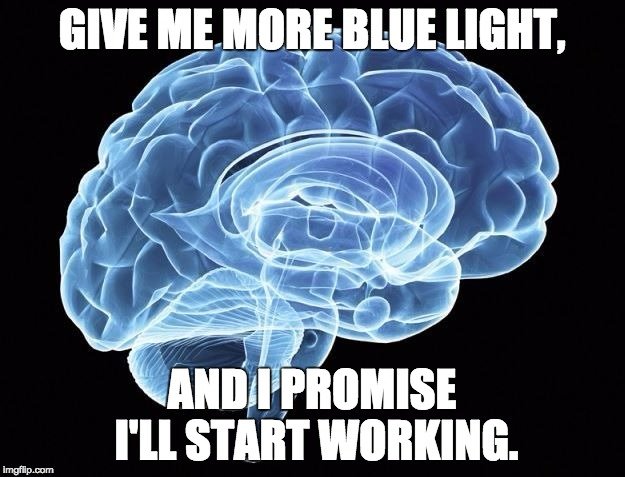 In an artificial light situation, however, like a lecture hall, the lights are typically low or dimmed, and certainly not blue in nature. If you’re being lectured with a projector in a darkened room, the situation is even worse. You may as well bring a blanket and a pillow, because you’re almost bound to feel drowsy in a lecture hall, even if the material is interesting to you.

The Science of Stimulation and Boredom

Our initial question was concerned with boredom’s relationship to fatigue, but that isn’t the only factor in play, as we saw above. That being said, suprachiasmatic nuclei stimulation is only one way to “wake up” our brain and body. Physical and mental stimuli are crucial to prevent unexpected naps; for example, when you’re driving in a car, opening the window or blasting music are two ways to prevent fatigue when the long, endless road stretches out before you like a one-way trip to boredom.

Similarly, physical stimulation in an academic setting, such as interaction with the professor or other students, keeps our minds alert and engaged. Think about it, how often have you fallen asleep in the middle of gym class? Or while you are having a heated debate with another classmate during a seminar? However, in a lecture hall, you are typically static – not moving, speaking, or interacting. Your pencil may be lazily scribbling down notes, but a lecture hall presents a weak, uni-directional source of stimulus for the brain, with the lecturer’s voice bordering on “white noise” for some students.

When our brain activity is diminished, our body is more likely to feel sluggish and easily distracted. When nothing is directly “happening”, our bodies have evolved to embrace that period of inactivity and sleep in order to conserve energy. We see the same thing happen when we sit down to watch a movie, read a book, or take a long drive. 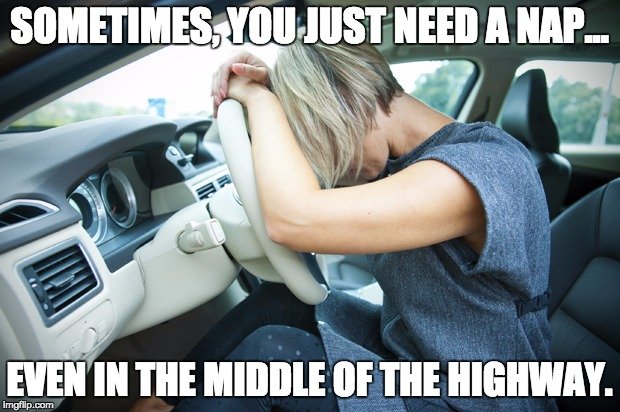 More specifically, boredom can be classified in five different ways: Indifferent, Calibrating, Searching, Reactant, and Apathetic. Studies have found that some personalities link directly to certain types of boredom, which can explain a great deal of our behavior. Nearly 40% of student-age participants showed a link to “apathetic boredom”, namely when there is a lack of arousal and an individual fails to feel positive or negative feelings. In other words, you may not hate learning about history, but you might not also love it, and when you’re in a static position without any physical, emotional, or mental stimulation, sleep is almost inevitable.

No matter what physical, light-based or mental stimulation you are experiencing (or lacking), fatigue almost always arises from a genuine deficiency of sleep. Student life (particularly at secondary school and college levels) is characterized by high levels of excessive studying, new responsibilities, social demands and interests, extracurricular activities, and a feeling of invincibility (“Sure, I can stay up for three days partying and then make it to my 9am lecture on time”).

Drinking coffee and relying on stimulants to perk you up can also be dangerous, because there is an inevitable crash back to Earth (and exhaustion) when you artificially elevate your energy levels. Once that initial rush wears off, the sudden lack of caffeine attaching to our nerve cells seems intensified, and as those nerves bind with adenosine (a sleep-inducing connection), the effects seem magnified. 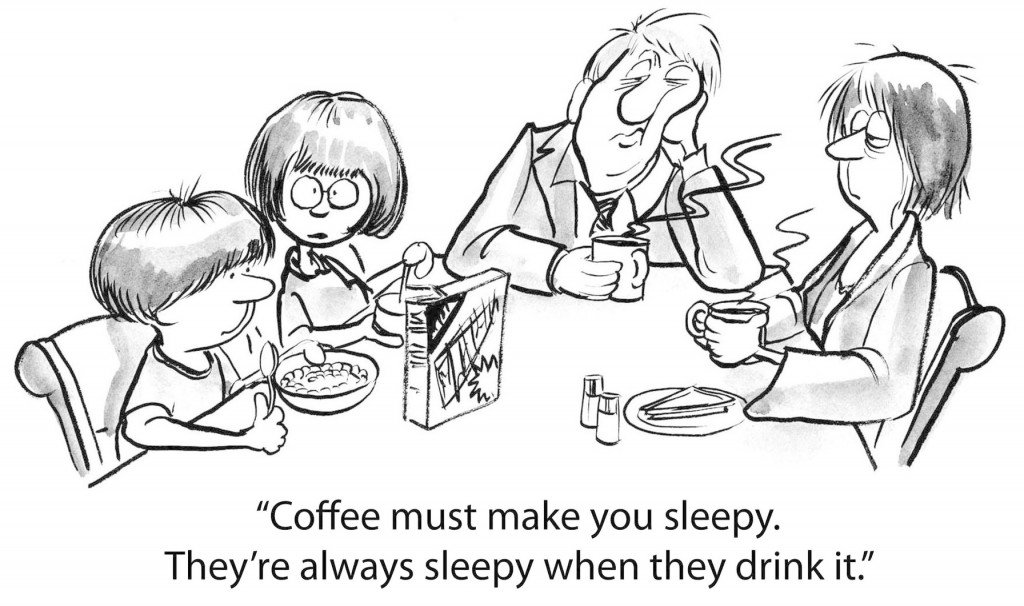 If you constantly find yourself nodding off to sleep in your lectures, don’t be too quick to blame it on a lack of stimulation, blue light, or interest in the subject matter. You may just need to grab an extra hour or two of sleep each night so your body isn’t craving rest, and cut down on your caffeine dependence. This will keep your body from snatching any available downtime for some shut-eye, particularly if your professor is watching!