Ask yourself, honestly, of the 8 hours that compose your workday, how many hours are you really productive? How many hours are you truly and uncompromisingly focused? Contemplate the number of hours in the last year that you have wasted looking at the monotonous sky, if you’re lucky enough to sit beside a window, or looking at the ceiling, if you’re not. While to your boss you seemed pensive, all you were thinking about was devouring the fruitcake you made the night before. 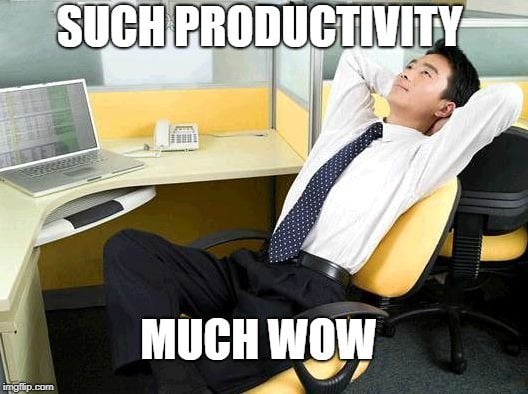 Or think about how many hours you’ve frittered away in the doldrums of a 9-5 job, either zoning out of meetings or indulging in currently the most common practice to distract oneself – scrolling. Today, we seldom find people who are immune to the seduction.

Why do we inevitably fall into this trap? Is it because, as one study concluded, we always underestimate the time we think we require to complete a task? If this is the case, we might be misled to believe that we can afford to squander some of that excess time on Facebook discovering which Ninja Turtle we might be. Every addiction psychologist knows that an addict, rather than deliberately repressing a craving, should take measures to prevent it from being conceived in the first place — rather than exercising one’s brittle willpower, one mustn’t carry money when heading out the door.

Similarly, to prevent employees from frittering away time and precious, expensive resources, should employers shorten the workday itself? There’s a consensus that the 8-hour proverbial grind is outdated and essentially all we need, regardless of the gamut of disparate domains – from engineering and law to science and art – is just 4 hours. 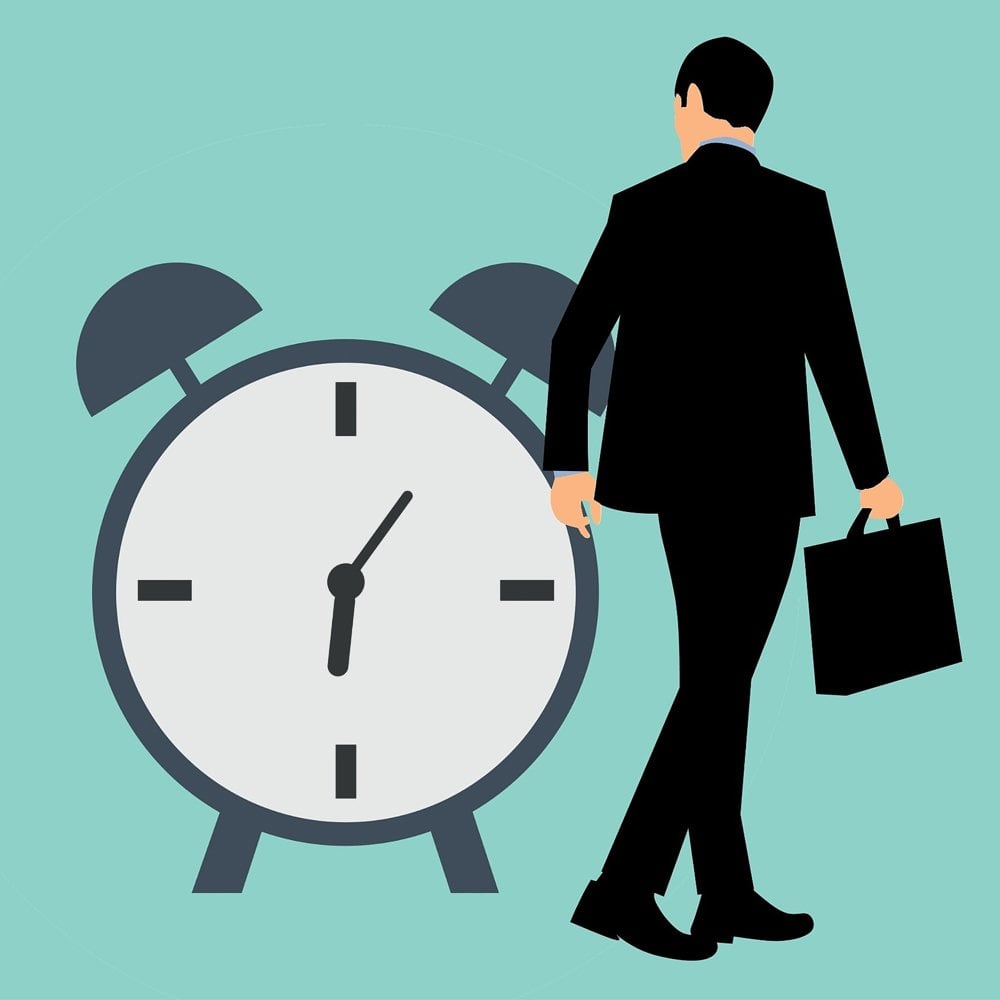 The 40-hour work week is a relic from the Industrial Revolution. If you think 8 hours is excruciatingly long, prior to its implementation after the notion of 8-hours work, 8-hours recreation, 8-hours rest was propagandized by the Labor Union, workers worked as long as 16 hours every day. The startling discovery was that a reduction in working hours had absolutely no negative effect on productivity. In fact, within a year of its adoption, the profits of The Ford Company, the first corporation to adopt this system, nearly doubled! The employees were happier because their work-life balance was restored. This happiness undoubtedly encouraged them to be more fruitful, but it was primarily the pressure to do more in less time.

Perhaps 8 hours sufficed almost a century ago when work – particularly industrial, rather than creative – was solely manual. However, 8 hours seems nonsensical today when manual labor is automated, and work tends to be dominantly cognitive. Ironically, this realization should have saved us time, but instead, people still tend to work as long as even 90 hours a week, probably according to the logic that more hours guarantees more work. This logic is indisputable when applied to machines, but it is high time we realize that human beings do not operate in the same way. 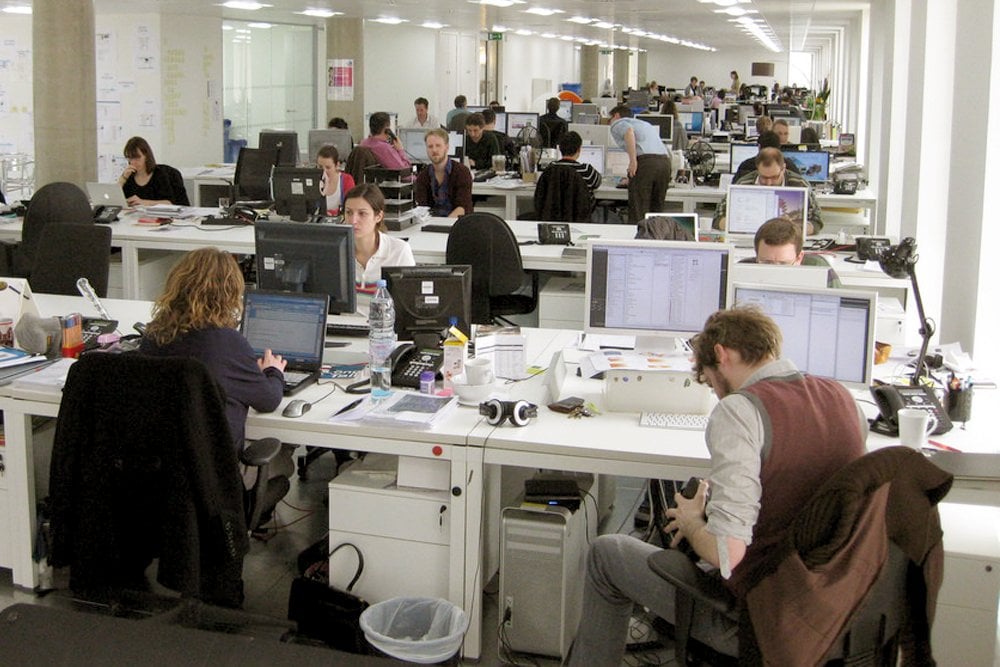 Our mental bandwidth is embarrassingly small and, rather than pushing its limit, we’d be far more efficient if we leveraged it in a period or series of periods as small as possible. In today’s relentlessly competitive culture, Silicon Valley engineers would describe Charles Darwin as lethargic and unambitious for he, instead of working, spent most of his time contemplatively treading gardens and climbing mountains.

Charles Darwin, one of the most influential scientists ever to grace this planet, whiled away most of his time walking and ruminating, but also managed to write 19 books, including the revolutionary but highly controversial Origin of Species and The Descent of Man. Darwin didn’t toil for 16 hours each day; he achieved these glorious feats by working, as you might have guessed, only 4 hours every day. He worked for two 90-minute periods in the morning and then an additional hour later in the day.

The prolific mathematician Henri Poincare wrote 30 books and 500 papers that covered a range of diverse subjects from theoretical physics to philosophy, and he, like Darwin, also worked every day for no more than 4 hours. Every day he lent his elbows to his bench from 10 am to noon and then in the evening from 5 pm to 7 pm. Thomas Jefferson also worked only 4 hours each day. Numerous artists belied the cliché of the obsessed artist: Nobel Prize winner in literature Alice Munro and writer John le Carre weren’t glued to their notes-strewn desks until the story materialized; they also chose to work no more or less than 4 hours every day. 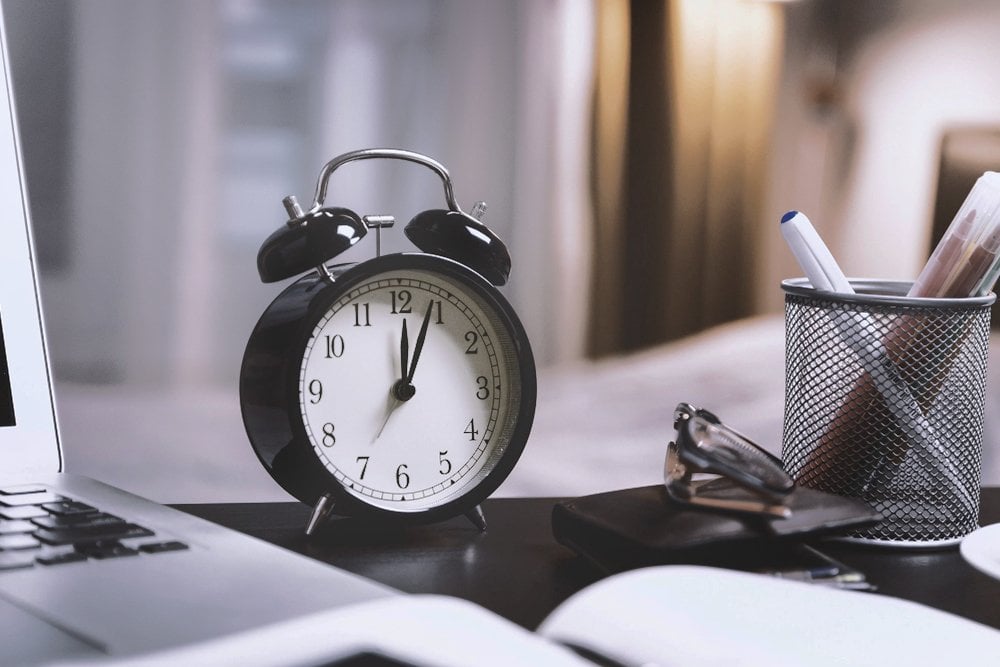 And wait, there’s more. The pioneer of capitalism, Adam Smith, wrote: “The man who works so moderately as to be able to work constantly not only preserves his health the largest but, in the course of the year, executes the greatest quantity of work.” Bear in mind that capitalism is the very principle upon which our economy is based. According to the Bureau of Labor Statistics, an average American works 34.5 hours every week. Either we have misconstrued Smith’s ideas, which is an innocent, reversible mistake, or the increasingly popular notion that the 90-hour work week is aspirational is a lie proliferated to exploit labor.

One of 20th century Britain’s most eminent mathematicians, G.H. Hardy, began his day with a lavish breakfast and learning cricket scores, followed by work from 9 am to 1 pm. “Four hours creative work a day is about the limit for a mathematician,” he opined. After 1 pm, he would abandon his desk for circuitous, pensive walks and playing tennis. Leonard Woolf, the husband of modernist writer Virginia Woolf, was also fascinated by “how much one can produce in a year, whether of buns or books or pots or pictures, if one works hard and professionally for” – wait for it – “three and a half hours.” What he meant by hard and professional was working with tremendous focus; not mechanically or unconsciously, but wisely.

These high-achievers did not work hard, but instead worked smart. They realized that taxing the mind for long hours at a time was counterintuitively unproductive. Rather, they worked when their energy was at its peak or when they felt that they were at their zenith of productivity. Every person experiences this peak; it is in this period when one does truly meaningful, thoughtful work, but every person also knows that it is immensely difficult to stay there. 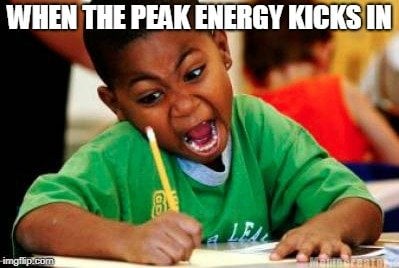 This is the working principle of the 4-hour workday – tremendous, uncompromising focus during only these peak times. Furthermore, as the psychologist would suggest, rather than resisting enticing distractions, switch off the phone or your data to deny the phone the opportunity to distract you in the first place.

Naturally, these peaks are mentally exacting and therefore cannot last, it seems, more than 90-120 minutes. Also, as finite as this period is, try to dedicate it to conscientiously performing only a single task. In fact, writer of Two Awesome Hours, Josh Davis, has audaciously claimed that one can do more meaningful work in just two hours when fully focused than in two whole days when semi-focused! In other words, leverage every bit of energy you can summon in those two critical hours.

Beyond the 90-minute mark, productivity has been observed to plummet. Coffee and other stimulants, upon which 50 to 90-hour work weeks are helplessly dependent, make it worse. The achievers listed above did not just value focus, but also rest. A lack of sleep beckons stress, one of the potential causes of cancer. According to a study conducted in 2015 involving 600,000 people, those who worked 55 hours or more every week were 33% more likely to suffer a stroke than those who worked 35-40 hours every week. Of course, coffee mitigates sleep, but this emulates a rubber band effect: the more you stretch, the harder it hits you. Don’t be surprised if, at the end of the day, you’re completely exhausted and as effervescent as a zombie. 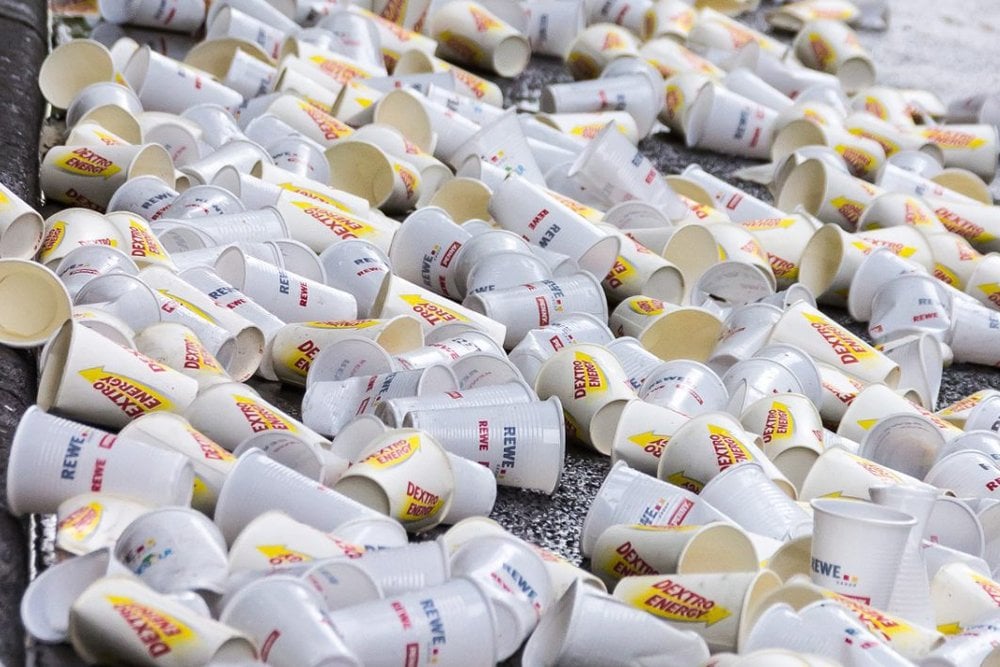 The critical importance of the conjugal relationship between tremendous focus and rest was best highlighted by Karl Anders Ericsson, Raif Krampe and Clemens Tesch-Romer. These researchers discovered a pattern in a study examining the lives of students learning the violin at a conservatory in Berlin in the 1980s. The researchers were interested in determining what separated the best from the rest. This was the very study based upon which Malcolm Gladwell stated his 10,000-hour rule in The Outliers, which is now a tenet of athleticism and other realms of achievement.

The researchers found that while every student practiced, the best students practiced deliberately, which required deliberate focus. However, the students never over-practiced. They were aware that excess focus and practice would cause burnout and injuries, so they practiced in regular, short bursts. The total duration of time they practiced every day was calculated to be, of course, 4 hours.

That is, 20 hours a week (excluding the weekends), 80 hours a month and almost 1000 hours a year, or 10,000 hours in a decade, just as The Outliers recommends. However, the rule is incomplete; its counterpart has been overlooked for a decade now. Not only did the best practice more deliberately, but they also rested more deliberately. They rested, on average, an hour more than the others in the study. In total, they spent 12,500 hours resting and 30,000 hours sleeping. Basically, squeeze 20-30-minute breaks or power naps between the 90-minute peaks. A brisk walk outside while assimilating the day’s work or listening to music or reading to forget about work for a while is advised. 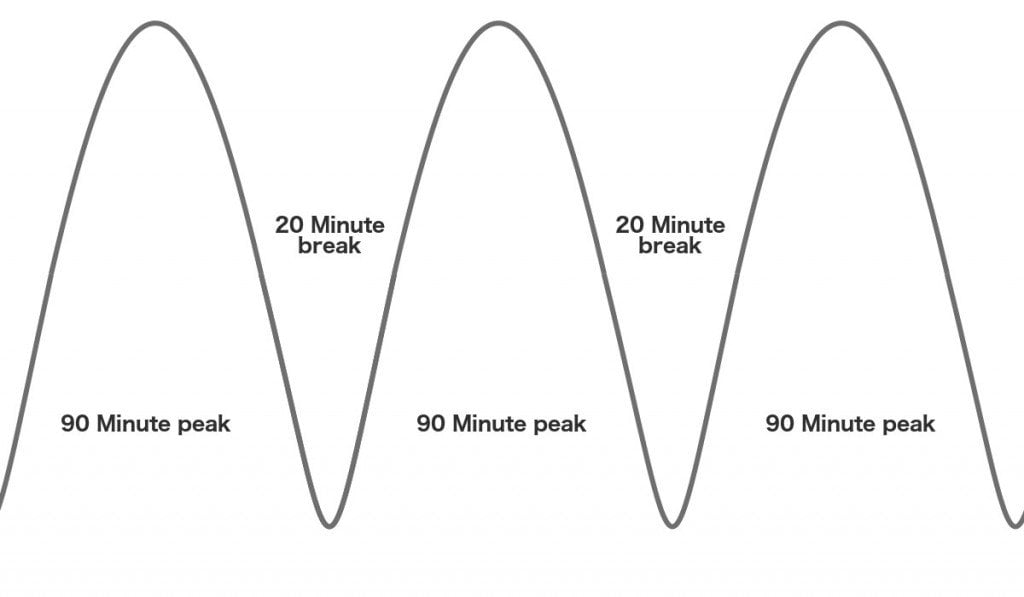 The crux of the argument is that a 4-hour workday makes us much more resourceful. We are able to, as Tony Schwartz advises, manage energy rather than time. Understand this distinction carefully. Becoming resourceful is not easy, as it requires one to make rigorous plans and follow them assiduously, but trust me, it pays off. In one study involving people who designed products, those who tackled the project with a smaller budget were significantly more resourceful and ultimately more successful than those who started with a larger budget. They simply didn’t have a choice. One can then spend the remaining 4 hours with family, with oneself, fulfilling passions and devouring fruitcakes. It is high time we begin to value work over presence.