Most people know that the way we move through the world has notable effects on our physical health. For example, if you don’t wash your hands after going to the bathroom, dress poorly for the weather, or take a lot of extreme risks, there is a good chance that you will be exposed to more germs, your body will be less capable of defending itself, or you will become injured. These are basic cause and effect scenarios that we all understand.

But what about the way you think as you move through the world… does that have any effect on our bodies? Can our emotional intelligence have a measurable impact on our physical health? 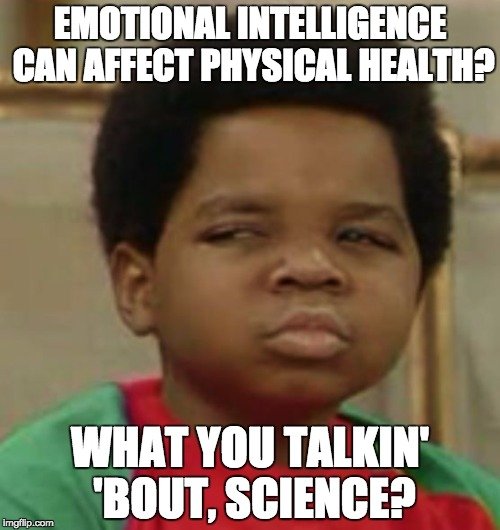 What Is Emotional Intelligence?

First popularized in the mid-1990s with the publication of Daniel Goleman’s book “Emotional Intelligence”, this concept is broken down into five critical parts – self-awareness, self-regulation, motivation, empathy and social skills. Emotional intelligence is often abbreviated as “EQ”, mirroring the classic “IQ”, which stands for Intelligence Quotient.

Self-Awareness: This element of emotional intelligence means honestly evaluating and paying attention to how you feel. When you feel a certain emotion, you do your best to understand and explain it, and you are aware of how your actions and emotions impact not only yourself, but also other people.

Self-Regulation: Being aware of your emotions is one thing, but being able to control your subsequent behaviors is another. Self-regulation deals with being able to maintain self-control over yourself, limit decisions based purely on emotion, avoid blaming others, take accountability for your actions, and channel your strong emotions in a positive way.

Motivation: This part of your emotional intelligence deals with improvement, advancement and progress. If you are a motivated person, you like to know where you stand, have access to information on how to improve, and the willingness to put in the effort to reach those goals. This is particularly relevant when discussing the impact of emotional intelligence on your physical health.

Empathy: This element of emotional intelligence is difficult to directly tie to your personal health, but it does show a certain level of perception and awareness to the needs and feelings of others. You are willing to listen to others, understand new problems or concepts, and genuinely invest in the wellbeing of other people. This range of outside experience may help inform your own decisions about personal health choices.

Social Skills: Social skills deal with communication, teamwork, conflict resolution and the ability to work within a unit, rather than solely going it alone. Having high social skills means being able to express yourself, even if it is about an uncomfortable topic, valuing the opinions of others, and allowing those outside beliefs or opinions to shape your understanding of a concept. In other words, don’t be like Johnny Depp.

Research has shown that EQ has a significant impact on mental health outcomes, but emotional intelligence can also directly affect our physical health.

Rather than using those 5 traditional aspects of EQ, personal emotional intelligence is better served by using the Trait Meta-Mood Scale (TMMS), which speaks to three core aspects of EQ:

Attention: The ability to notice and pay attention to their moods.

Clarity: The ability to clearly understand the nature of their moods.

Repair: The ability to maintain positive moods and repair negative moods, when necessary.

When looked at from this angle, it is easier to see how emotional intelligence could affect physical health. As a simple example, if you possess the powers of attention, clarity and repair, then the following scenario might be true for you…

You begin to feel a bit irritable, and can’t seem to focus on your tasks at work. After a few moments of consideration, you remember that you had to skip breakfast because you were running late, and have only drunk two cups of coffee since waking up. The emotion you are feeling is hunger, so you decide to go into the break room and fix yourself a healthy snack, as lunch is still two hours away.

In this rudimentary example, you paid attention to your mood, identified the reason behind it, and put in direct effort to repair the negative mood before it got any worse, with a solution that would satisfy your needs. This is a simple, but obvious scenario where emotional intelligence affected physical health in a positive way.

Numerous research studies have matched elements of emotional stress and behavioral response to cardiovascular, hormonal and enzymatic activity. Some studies consisted of subjects writing about emotionally traumatic events, which included recall and analysis; during these writing sessions, their systolic blood pressure was monitored. 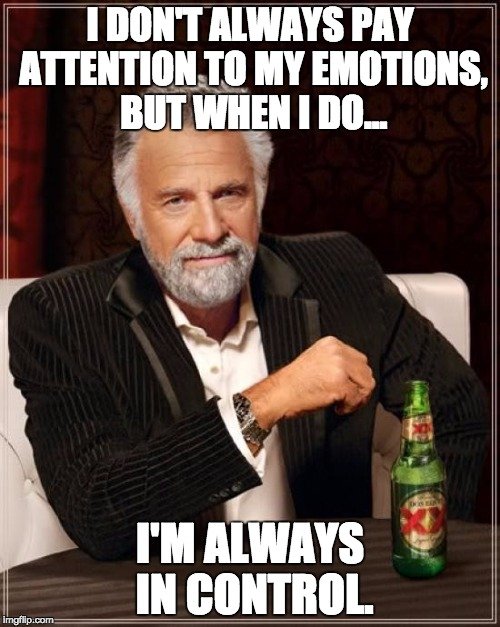 Overall, without providing an exhaustive account of the research studies,the results showed that people who strongly attenuate and accurately perceive their moods are able to cope with stressful situations, overcome hesitance is seeking medical attention, accept the physiological changes in their body and proactively seek resolutions that lead to better health. This can be manifested in everything from overcoming nicotine or alcohol addiction to improving their diet and maintaining a strict exercise regimen. All of these behavioral rhythms are linked to strong emotional intelligence, an acceptance of personal reality, and a level of dynamism and accountability for their own wellbeing.

In short, if you are self-aware, self-regulatory and motivated, you will be more likely to experience positive health outcomes, regardless of how and when they appear in your life!