To enter the resting phase, larvae of silkworms begin to form a natural cover around them, secreting slimy thread-like structures that subsequently harden into a cocoon. This is the source of coveted silk.

Smooth as butter, comfortable like cotton, yet strong as steel. This is a dream fabric for many, and yes, you’ve probably already guessed what it is—silk! 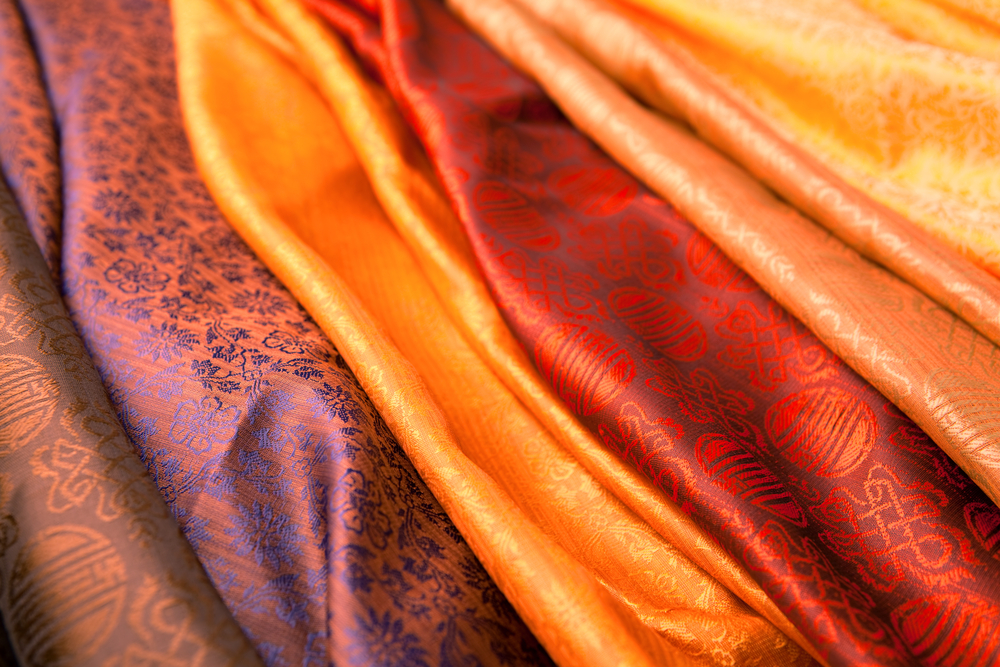 If you have ever been in apparel markets in China or India, you have likely come across silk. It has a distinct texture, a soft feel, and shiny luster. These distinct features make silk one of the most coveted fabrics in the market.

Guess where this fabric comes from? Not from plants or mammals, but from insects! Yes, those tiny critters we so often treat with disdain are the creators of this lush material. It is indeed hard to believe that such an exquisite form of fabric comes from an insect. Thankfully, this insect isn’t as freaky as a cockroach or potentially painful like a stinging bee. It comes from an innocuous moth.

More specifically, most of the silk we see comes from a special species of moth, the Bombyx Mori, whose role in this historic process dates back thousands of years.

Silk is one of the oldest fabrics known to humankind. It was discovered in ancient China. As per the Chinese legend, it was discovered some 5000 years ago by Empress Xi Ling-shi, wife of legendary Emperor Huangdi. Folklore of her silk discovery is as interesting as that of Newton and gravity!

So, the story goes like this. One day, the empress was sitting in a garden under the mulberry tree. She was sipping tea intermittently while sharpening her sword. A cocoon fell under her cup of steaming tea without her noticing. Just when she was about to sip the tea, she saw shiny thread rolling out from the dropped cocoon in the tea. The Empress was enamored by this eccentric cocoon that had fallen into her tea.

She started scouring the trees and plants around to discover where the cocoon had come from. Her search led her to find more cocoons of silkworms (Bombyx Mori). She was impressed by the other cocoons hanging on the mulberry tree and figured out that the thread was made by the silkworms wrapped inside the cocoon. Its soft thread-like cocoon gave the empress a smart idea: to weave fabric from it!

She began studying these silkworms and wrote down her observations. After her diligent studies, she managed to crack the lifecycle of moths and came to understand how cocoons could be leveraged to produce silk—the soft smooth fabric. So, what exactly did she learn about silkworms?

The lifecycle of the silkworm

Well, silkworms, just like other moths, go through a beautiful life cycle from being a minuscule insect tinier than ants into becoming a butterfly-sized winged moth. However, this evolution is not direct, and there are a couple stages involved in the lifecycle.

It starts with an adult female moth laying eggs. Silk moths can lay anywhere between 300-500 eggs at one time. Now, when these eggs hatch, tiny caterpillars come out and immediately start searching for food. These baby worms are technically called a larvae. These larvae typically feed on mulberry tree leaves, and they are prolific feeders. Larvae keep chomping on leaves and grow nearly 10,000 times larger within a few weeks. 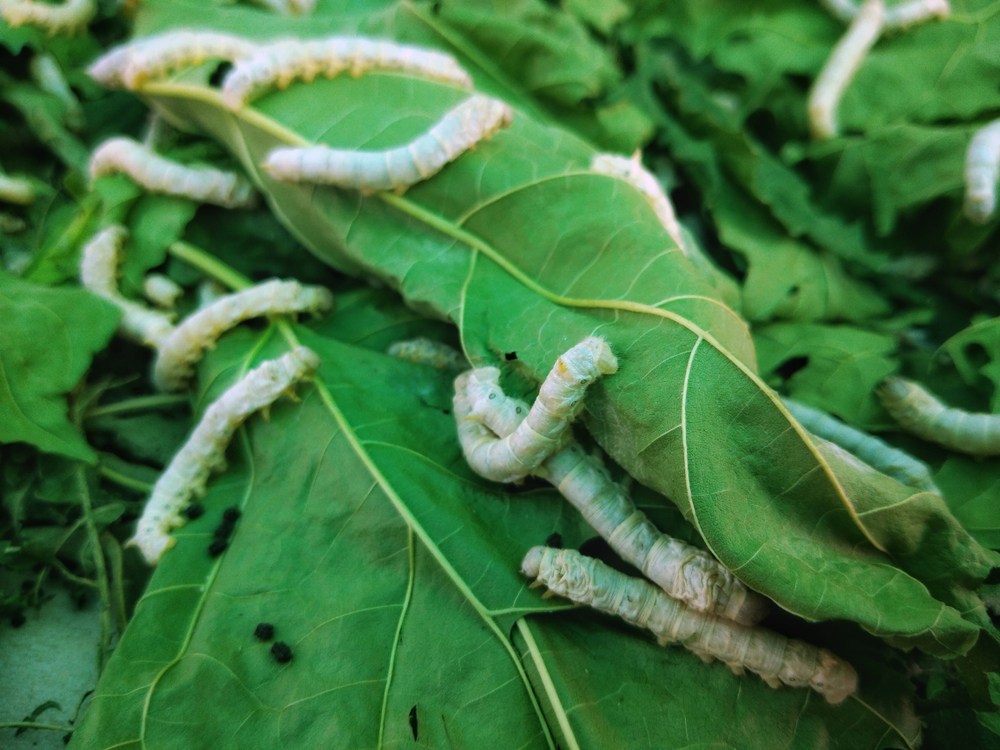 Once they are content with their feeding, they go into a resting phase. To understand this resting phase, consider how humans rest/sleep. For resting, all we need is a nice cozy cover in the form of a blanket. Silkworms behave in a similar way to us.

To enter the resting phase, these larvae start to make a natural cover around them. They have a special spinneret in their mouth that secretes slimy thread-like structures made of protein. They swirl their head in all directions, secreting the thread to wrap themselves up nicely. Upon exposure to air, this slimy cover hardens, forming a thick coat of fiber. This is called a cocoon, and is the source of coveted silk. 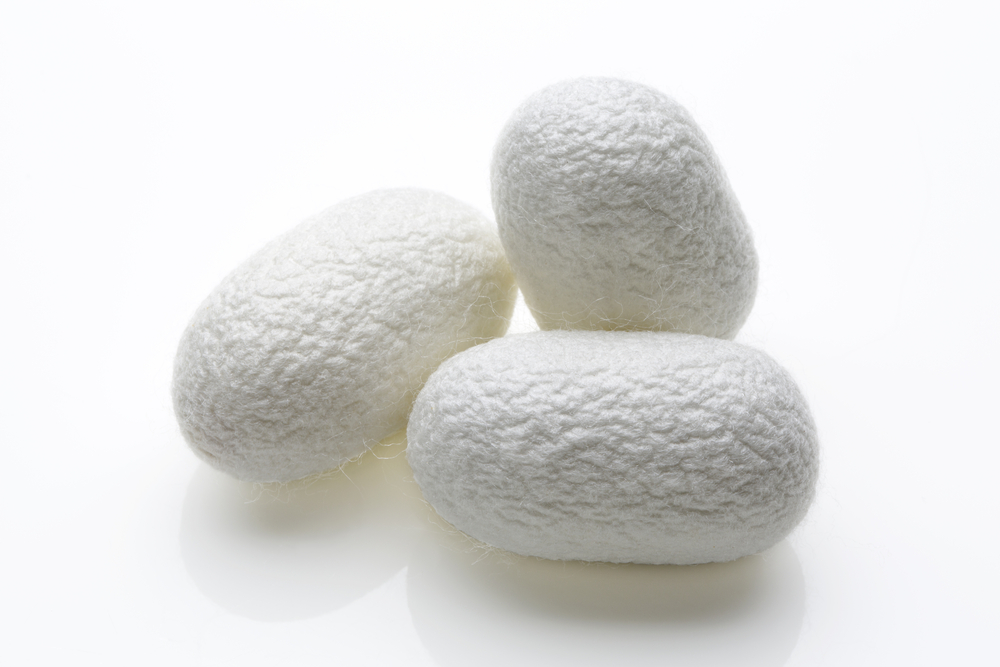 At this stage, the larva is transformed into a pupa. The pupa is sessile, i.e., it does not move. While pupating, the pupa starts developing organs that adult moths have inside the cocoon shell. After pupating for a few weeks, an adult moth comes out of this cocoon.

These moths breed and the female moths start laying eggs, and the cycle repeats. 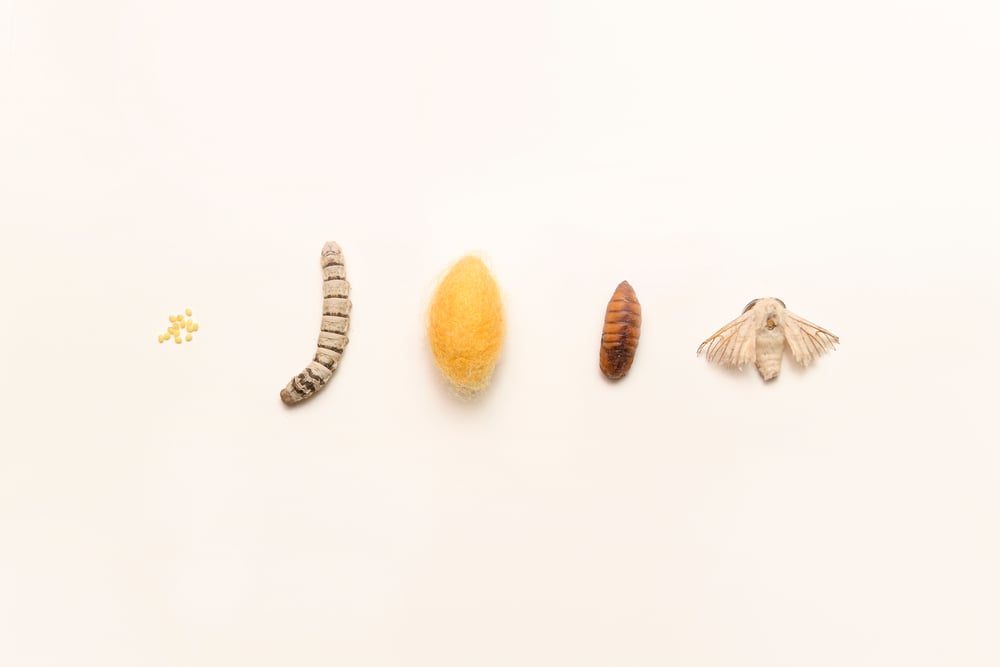 The lifecycle of a silkworm: From egg to moth (Photo Credit : ChilliPix/Shutterstock)

Now, some of you might have assumed that we must be using cocoons to get silk once the adult moth leaves the cocoon shell. Unfortunately, that’s not the case. If we wait that long, the silk would degrade and be unuseable as fabric. So, we stifle cocoons in steam to get the silk while they are still pupating. There is a whole industry dedicated to extracting silk from cocoons, a practice called sericulture.

Sericulture, the practice of breeding and cultivating silkworms to procure silk, is undertaken widely in rural areas of China and India. Cultivated Bombyx Mori typically hatch eggs during the summer. Eggs hatch within 3-4 weeks. After they are hatched, larvae are fed with mulberry leaves around five times each day.

All these efforts continue until the time they pupate, i.e., encapsulate themselves in a cocoon. Once silkworms do this, they are placed in a container where they’re boiled for a few minutes to stifle the pupae inside, before they transform into a moth. Yes, this is cruel, but it’s how we get silk.

The boiling of cocoons makes it easier for the wound thread to unravel by melting Saracen, a naturally secreted gelatinous protein that binds the cocoon. To harvest silk, threads from 30-50 cocoons are clubbed together into a single thicker thread by passing them through a tiny hole in the bamboo stick onto a hand-operated reel. The operator slowly and carefully turns the reel, unravelling the cocoon thread.

It takes two to three thousand cocoons to get a pound of silk. Unravelling of the cocoon is a time and labor-intensive process. This is the reason why silk is so expensive and is often found in luxurious items. 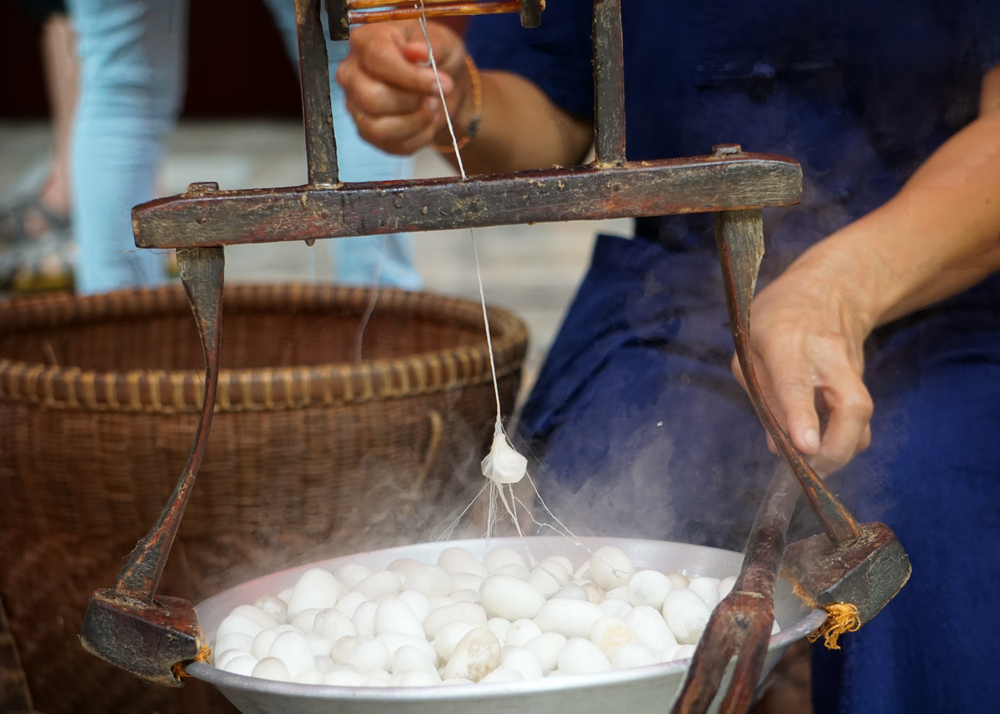 The next step is to clean this thread by washing it in warm water and clearing off any Saracen remnants. They are dyed to give them the desired color. After dying, the silk thread is allowed to dry. Once dried, silk is fed into large rollers and weavers, which produce the final piece of silk apparel. This Vox video shows how silk is extracted from silkworms:

Silk is famous for its durability. It is actually stronger than many metal wires. In fact, it is the strongest natural fiber known to man. And what’s even more amazing is that it comes from an innocuous moth not known for its sturdiness. That’s the beauty of nature… it just keeps surprising us!