“‘Diction’. What a great word that is, right? ‘Diction’. I think the word is so slick that I like to say it over and over again.

This guy has great diction.

You should really work on your diction.

Diction is all about choosing the right words in the right places.

Does this situation sound familiar? Has it ever happened to you that a perfectly normal word, when repeated over and over and over again, suddenly loses all its meaning and starts sounding weird? This includes both prolonged viewing of the word and its active repetition (oral or written).

If this has happened with you, then let me tell you this: This phenomenon (namely when a word loses all its meaning when repeated multiple times), in fact, is quite common, and it also has a fancy name: semantic satiation.

How Can We Sometimes Keep Reading, But Not Understand Anything We Read?

What is semantic satiation?

Semantic satiation is the name of a psychological phenomenon wherein the repetition of a word, whether it’s visual or oral, causes it to lose its meaning for the viewer/listener, and makes it seem like it’s just a meaningless sound. Historically, the term ‘semantic satiation’ has been used to refer to the subjective loss of meaning that comes as a result of prolonged exposure to a word. The term ‘semantic satiation’ was coined by Leon Jakobovits James (a psychology professor at the University of Hawaii) in his 1962 doctoral dissertation at McGill University; he wrote his doctoral thesis on the phenomenon. According to James, it’s a kind of fatigue (reactive inhibition). He says, “when a brain cell fires, it takes more energy to fire the second time, and still more the third time, and finally the fourth time, it won’t even respond unless you wait a few seconds.” He adds that the more times you repeat a word, the more energy it takes.

Although, you can experience semantic satiation with practically every word, some words lose meaning faster than others. These are usually the words with whom you have “stronger associations”. For instance, the word “Internet” would turn into brain mush far less quickly than the word “semantic”. Semantic satiation can be experienced with any word.

But why does really happen? What’s going on here?

When you hear, read or speak a word, your brain isn’t really listening to its sound; rather, it’s translating those sounds into an idea. That idea is then put together with other words, to form a more complex idea. However, when you repeat a word multiple times, your brain ceases to recognize it as a word (which subsequently keeps it from translating it into an idea), and breaks it down into sounds. These sounds, of course, have nothing to do with the inherent meaning of the word. That’s why a purely normal word begins to sound like gibberish. 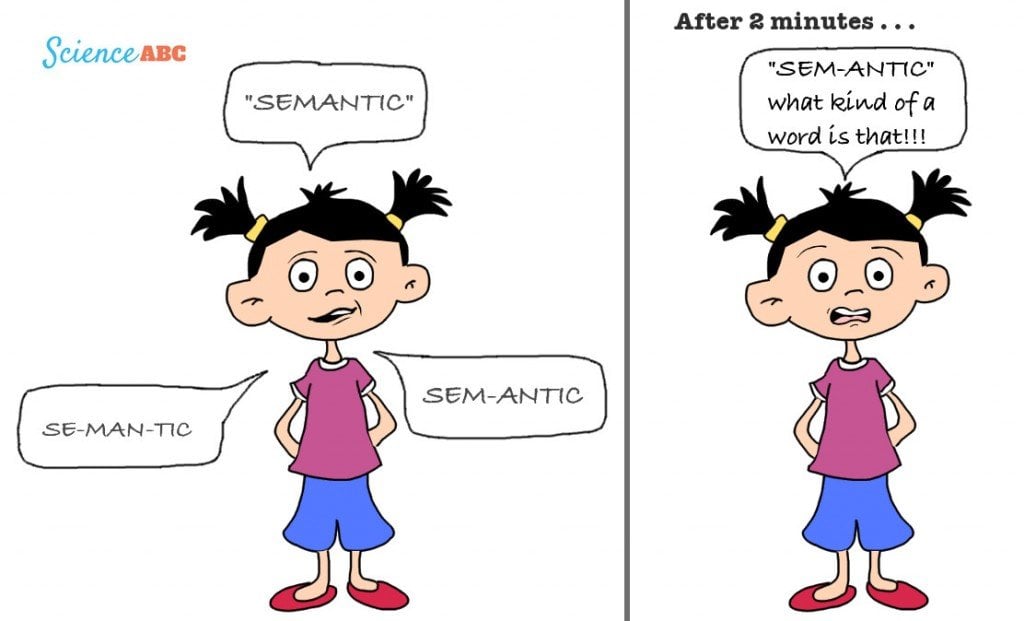 The longer a word is ‘played’ with, the more meaningless it becomes.

Think of it this way: our brains have an incredible ability to take words and understand an entire concept associated with them. For instance, when you think of the word “book”, you instantly conjure up the image of a book. You may have additional details like color, thickness, cover etc. in the background, but you instantly connect with the idea of a book the moment you look at the word or hear/speak it.

However, when you start repeating it actively, the brain refocuses on the actual word “book”. Then, it thinks about the word, its intonation, sound, the letters it comprises etc. These things obviously have nothing to do with the idea of a book, which is why the word seems meaningless the more times it’s repeated.

Interestingly, the idea of semantic satiation is used to develop techniques to reduce speech anxiety by stutterers. The repetition of specific words leads to semantic satiation, which, in turn, leads to a reduction in the intensity of negative memories and emotions that are triggered while speaking.

Did you ever imagine that something you considered a random ‘thing’ with words could actually be used to help patients with speech defects?

Test how well did you understand semantic satiation