Carotenemia or carotenosis is a medical condition that makes you look like a Simpsons character by giving your skin a yellowish-orange color. It is a harmless condition that has no major consequences apart from the discoloration of the skin. 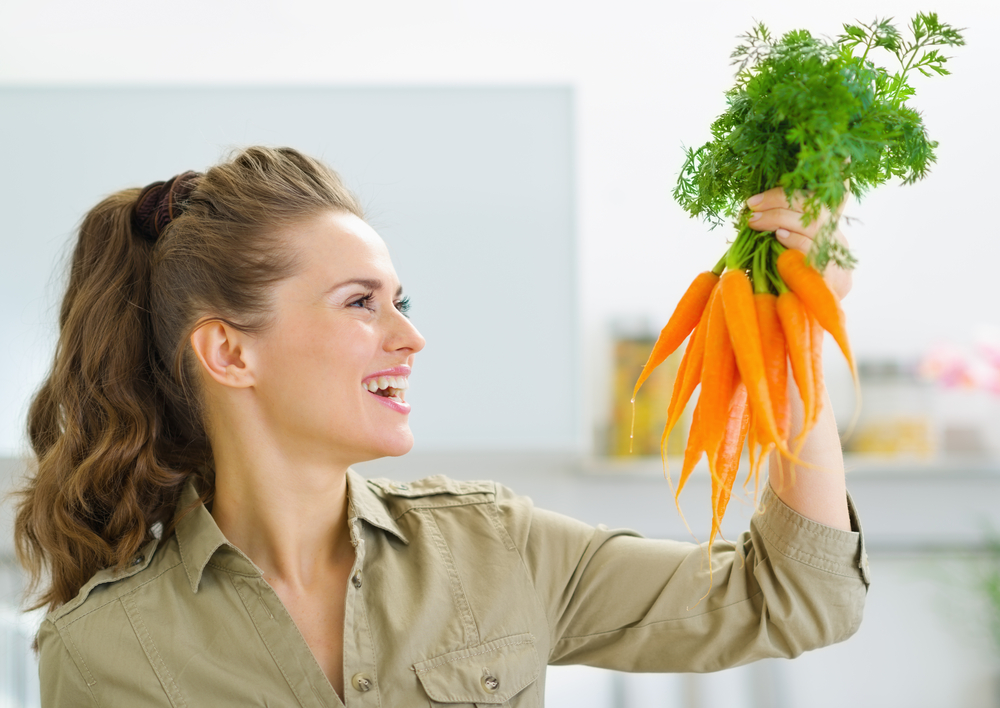 Can eating too many carrots turn your skin orange? (Photo Credit : Alliance Images/Shutterstock)

Adults are always messing with children. At times, our childhoods are a struggle to find out what’s true and what’s a blatant lie.

“If you swallow a seed, a tree will grow inside you?” That’s a lie.

“If you eat too many chicken nuggets, you’ll start clucking like a chicken?” Nope.

“Eating too many carrots will turn you orange.” Nonsense… or is it? Surprisingly and unfortunately, this one isn’t a lie.

What’s The Big Deal About Carrots?

Carrots are a rich source of beta-carotene, a type of pigment found in fruits and vegetables that gives them a yellow-orange-red color. In fact, of all the carotenoid pigments out there, beta-carotene is the main one. It gets absorbed in the small intestine, where it gets converted to Vitamin A in a two-step process. 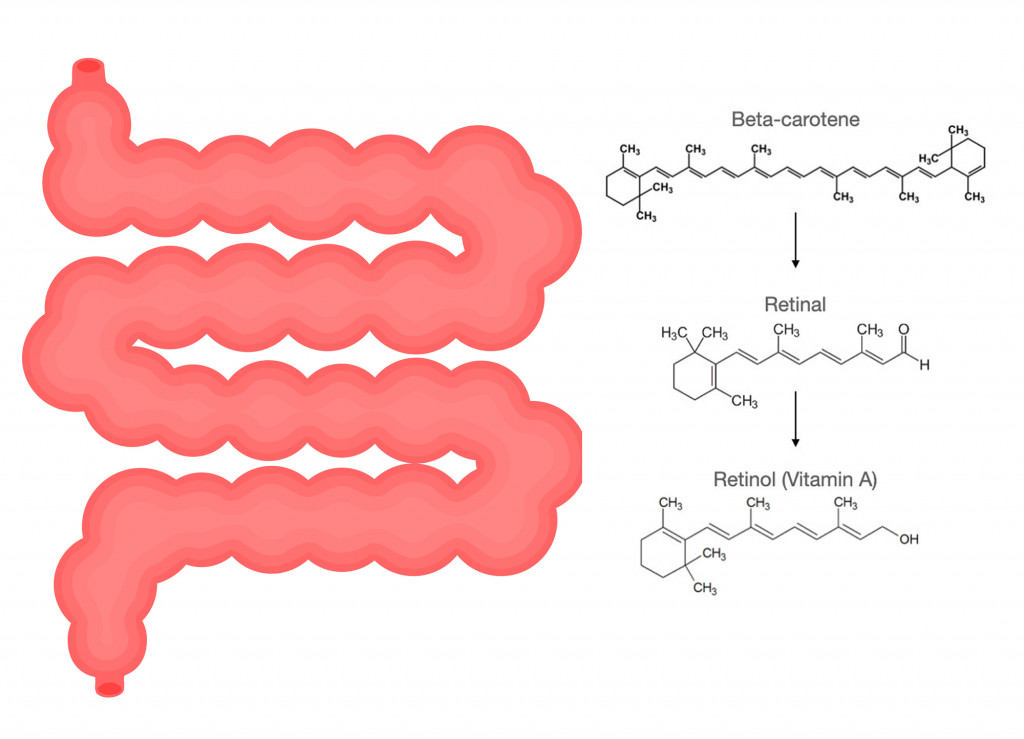 The beta-carotene we get from food is absorbed in the small intestine, where it is converted to retinal by the ß-carotene dioxygenase enzyme. Retinal is then reduced to retinol.

We now know that Vitamin A is important for good vision. If you didn’t know that, find out more here.

Thus, more carrots means more Vitamin A, which means eagle-like vision, right? Wrong. As it turns out, you actually CAN have too much of a good thing.

Where Does It All Go?

Even though most of the carotene we ingest is converted to Vitamin A, 10% gets absorbed without conversion and sent into our circulation. The body controls the amount of Vitamin A it produces from carotene, which prevents Vitamin A toxicity or Hypervitaminosis. The rest of the carotene gets deposited in the skin, as carotene has an affinity for fat. 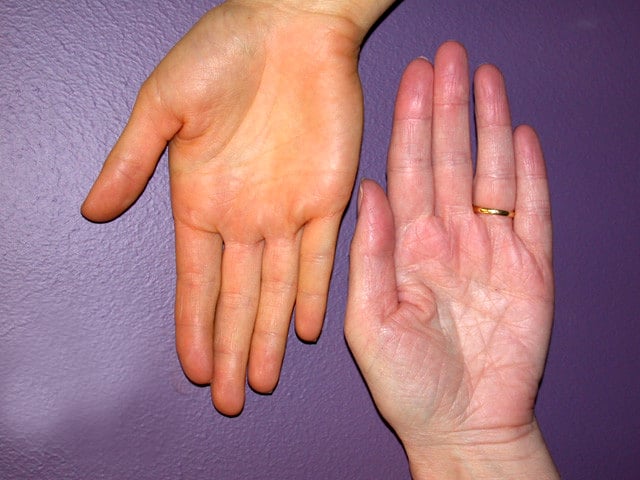 Image showing normal palm color on the right and the yellowish discoloration seen in carotenemia on the left (Photo Credit : Creative Common License)

Basically, if you’ve eaten too many carrots, it’s all headed one way. The excess carotene accumulates in the thicker areas of your skin, including your elbows, knees, palms and soles. This results in carotenemia or carotenosis, a medical condition that makes you look like a Simpsons character by giving your skin a yellowish-orange color. Think of it like your mom putting cookies in a cookie jar and then hiding it. Your body does the same with excess beta-carotene, but sadly for us, the body hides the excess in plain sight. 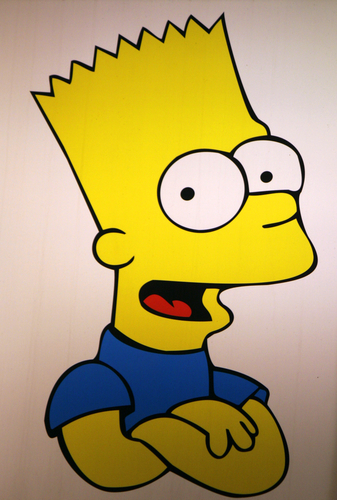 Halloween coming up and you don’t want to get paint all over yourself? Eat a bunch of carrots! (Photo Credit : 360b/Shutterstock)

Carotenemia was first described in 1919 by Hess and Meyers. They noticed two patients in a children’s ward developing a yellowish tinge to their skin. After ruling out every other possibility, they looked into the children’s diet. That’s when they found that these two kids had been getting a bunch of carrots in their meals every day for weeks!

How Much Is Too Much?

According to the U. S Department of Agriculture, USDA, one portion (100g) of carrot contains about 8mg of beta-carotene. Dermatologist Dr Melissa Piliang, MD in an article in the Cleveland Clinic, says you need about 20-50mg of beta-carotene per day for a few weeks to develop carotenemia. This would be roughly equivalent to eating 10 carrots a day for a few weeks. Even Bugs Bunny would find that a tall order!

Who Gets This Sun-free Tan?

Children are the most likely candidates to develop carotenemia, with one study showing an average range of 7 months to 11 years. Let’s blame the pureed carrot food for babies. 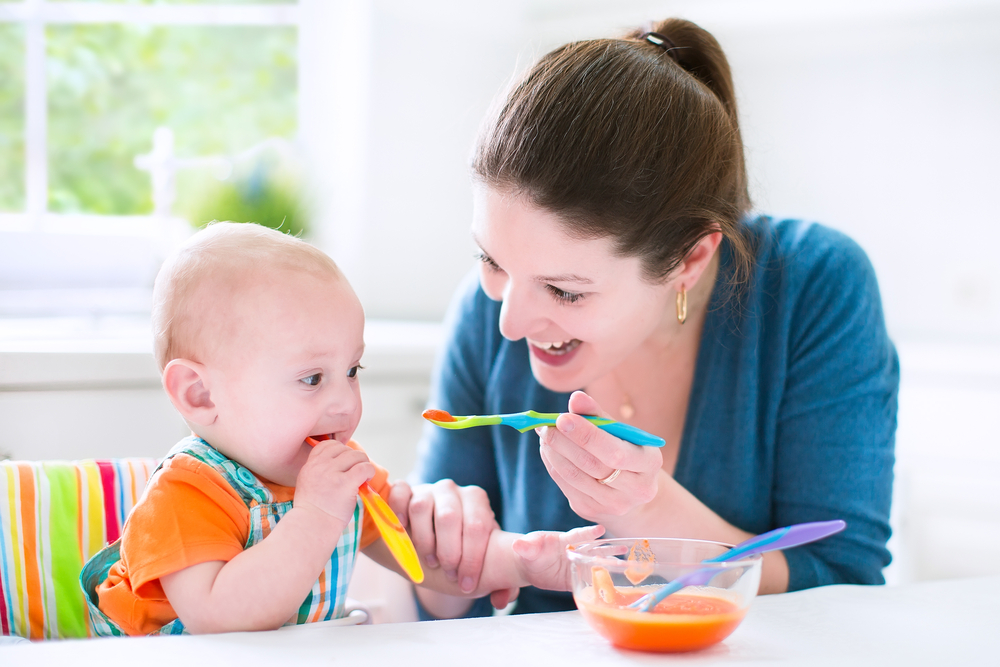 Apart from being a great source of Vitamin A, carrots are rich in dietary fiber. Their bright orange color also makes it a favorite) (Photo Credit : FamVeld/Shutterstock)

Carotenemia appears in other age groups too. The food shortage during the World Wars ( both 1 and 2) forced many people to switch to plant-based diets, resulting in multiple reports of carotenemia in those time periods. Reports showed up during World War 1 and World War 2 when most people had to switch to veggies because of food shortages. Any discoloration of the skin is also a lot easier to detect in lighter skin types, so most reported cases come from Caucasian populations. 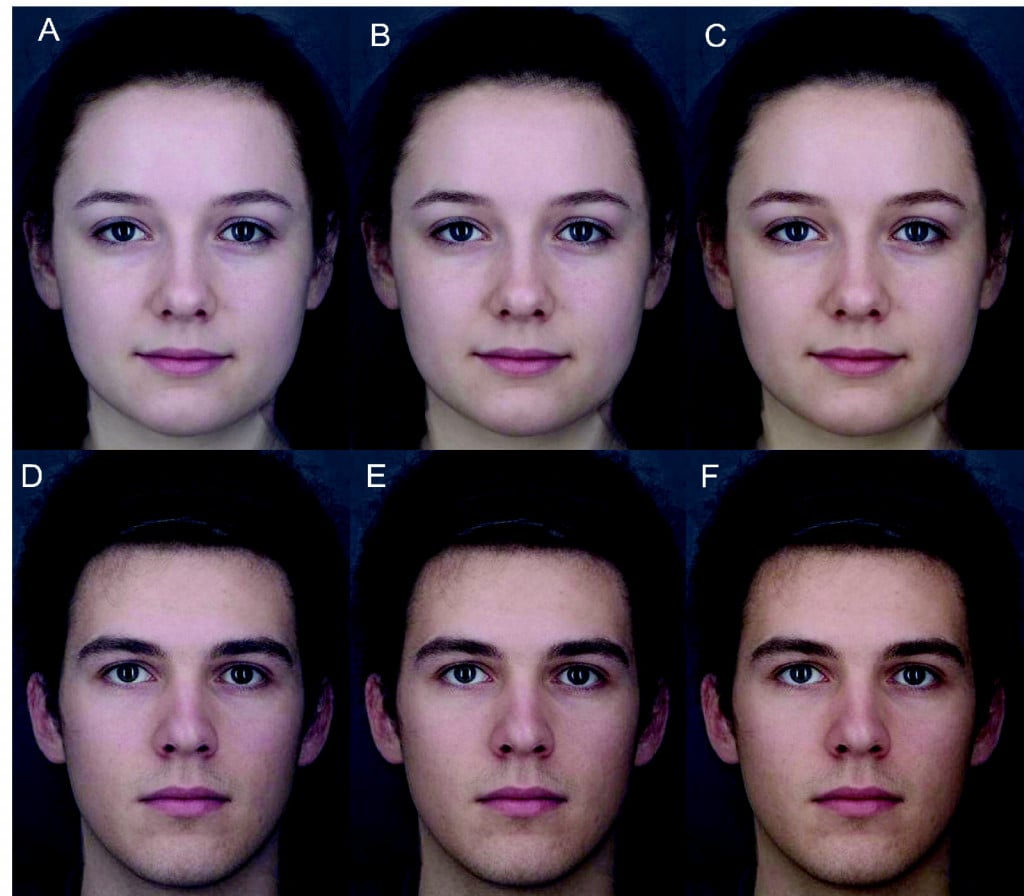 Interestingly a cross-cultural study reported that people actually found the yellowish color of the beta-carotene pigment on a person’s skin attractive. This has subsequently led to the fad of people taking “tanning pills”. These pills often contain beta-carotene or other similar compounds, but a lot of these pills don’t have FDA approval. 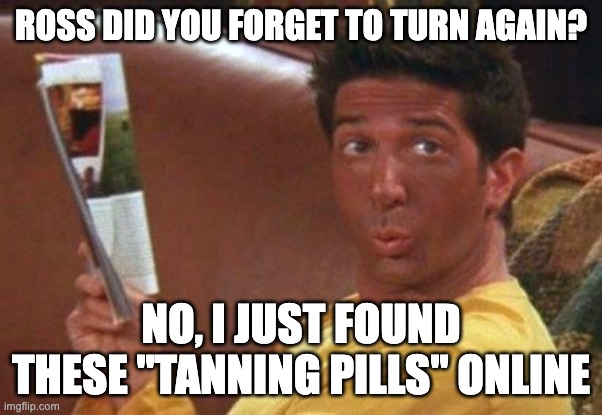 Tanning pills have become a popular fad, but consider that many lack FDA approval.

Another susceptible group are patients suffering from hypothyroidism. This is because the consumption of Vitamin A in these patients is low, which results in a buildup of beta-carotene.

Carotenemia is a harmless condition that has no major consequences, apart from the discoloration of the skin. The only danger here is to ensure that the skin discoloration isn’t due to other diseases, like jaundice, kidney disease or thyroid disease. This is easy to rule out, as carotenemia doesn’t cause any discoloration in the white of the eyes, unlike those other diseases.

Once your doctor rules out all other causes and diagnoses you with carotenemia, the treatment is quite simple. You start a treatment course of eating FEWER carrots and restoring a balanced diet! Your skin will eventually return to its  natural color in a few weeks or months.

When it comes to young children though, developing carotenemia could mean they aren’t getting a balanced diet. If you see the skin tone of your children change, parents, you might want to rethink your meal plans!

Also Read: Science Of Ripening: Why Do Bananas Change Color When Ripening?

Bring Those Carrots Down!

Now, before you start an all-out carrot war, remember that they’re not the only foods that can cause carotenemia. In fact, any vegetable or fruit that contains beta-carotene can do the trick, not just those in the yellow-red color spectrum. There are certain other foods, like eggs and cheese, which also contain beta-carotene.

In summary, eating a good amount of carrots can help your vision indirectly, but eating too many can give you the color of one! Just like everything else in life, a healthy balance must always be struck.