Synchronicity is a word that describes “meaningful coincidences”, in which the inner and outer worlds appear to align or fall neatly into place. Despite its widespread appeal, it remains a pseudoscience, as there is no way to prove either its validity or falsity.

Imagine walking down a street in your old neighborhood, listening to music, when you turn a corner and stumble upon a special bar that you used to frequent with an old lover. As you walk past the bar, musing on some good old days, a song that was particularly special during that relationship trickles out of the open door. A few hours later, your phone buzzes and to your surprise, that same ex-partner has reached out to say hello after months being out of contact.

If that story sends a shiver of recollection down your spine, then you have experienced what some people in the world would call synchronicity, although many may relegate it to the arena of extreme coincidence.

The origins of synchronicity, its philosophical and spiritual meaning, its validity as a measurement of experience, and its powerful hold on human imagination are all fascinating subjects that deserve to be explored!

There’s a good chance that many of you readers were able to relate to the example above, and you’re not alone; one of the greatest minds of the 20th century, Carl Jung, was also fascinated by such “meaningful coincidences”. Importantly, the linked elements have no causal relationship, but connote a powerful sense of meaning to the person experiencing this phenomenon. While Jung had mused on this subject as early as 1913, during his early period of psychosis, and even commented on the idea of an “acausal togetherness principle” in the 1920s, he didn’t full flesh out the idea until 1952, when he published the landmark paper—Synchronicity: An Acausal Connecting Principle. 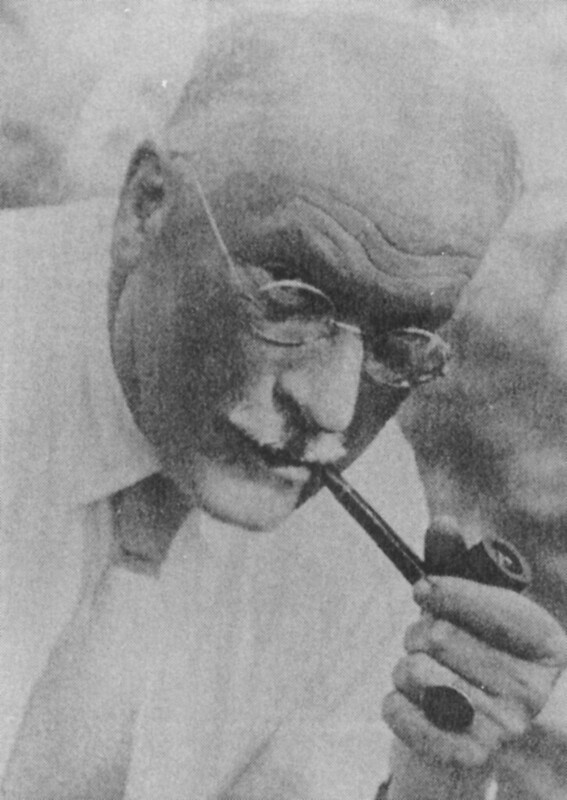 Jung’s central argument was that, just as events can be linked by causality, events outside the explanation of causality could also be linked by meaning. In other words, in relation to the example of the “bar/song/phone call” above, that instance of synchronicity goes beyond mere coincidence; instead, it reflects evidence that everything in the universe is actually linked, and that we are all linked to a collective consciousness. 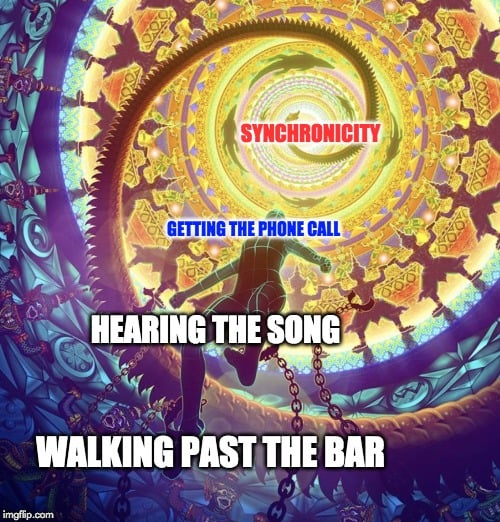 In addition to being an esteemed analytical psychologist, Jung was also fascinated by and a stated belief in the paranormal, numerology, alchemy, astrology and telekinesis, among other fringe subjects. His philosophy on synchronicity was highly compatible with many of those same beliefs, such as the meaningful connections or coincidences that suggest some sort of otherworldly presence or attempt at communication. Many believers in the paranormal will reference instances of synchronicity to justify their faith. For example, a man whose parents both died in a car accident during a bad winter storm suddenly thinks to call his sister, whom he doesn’t speak to very often. He ends up not making the call, but later finds out that she got into a minor accident days earlier during a snowstorm.

For outside observers, this may seem like pure coincidence, but for that man, the experience contains a huge amount of meaning. It combines elements of his inner world (memories and present thoughts) and the outer world (his sister and her accident), with no causal relationships to be seen. In such a situation, it is easy to understand why a person may think they had received a message from their parents, a “sign”, or some attempt at connection from beyond the grave. A believer may say, “what are the odds of that happening?” as though that in itself is proof, evidence that there must be something “bigger” going on.

That “bigger thing” in Jung’s view, was a collective consciousness, an idea derived from quantum physics, in which every individual person could be akin to a quanta, all bumping into one another all the time, like atoms in the universe. The same quantum entanglement could be applicable, therefore, to all the quanta, allowing for the seemingly impossible moments of synchronicity across time and space. Despite having no formal background in science, Jung often referenced this link to quantum mechanics, and even had his ideas supported by well-known physicists of the day, such as Wolfgang Pauli. In fact, Jung’s original article was published in the same volume as a related study by Pauli, known for his discovery of the famous (Pauli) exclusion principle, and his promotion of spin theory.

While this idea, and others like it (i.e., serendipity, seriality, and simulpathy) are popular, synchronicity has fallen into the realm of pseudoscience, as it cannot be proven or disproven. The appearance of synchronicity is commonly dismissed or disproven by the well-studied phenomenon of confirmation bias. Basically, confirmation bias means that people are more likely to draw notice when connections are made than when they’re not. Going again to the initial example, the individual was primed to notice that song in that place, followed by the unexpected phone call, but hearing that song in a different context, walking past that bar when it wasn’t playing music, or receiving that same phone call a few days later would not have sparked the same recognition, as these would be “non-events”.

Confirmation bias is commonly described as “remembering the hits and forgetting the misses” for that very reason. However, statistically speaking, these moments of synchronicity are far from impossible, albeit highly unlikely, with incredibly low odds. More importantly, however, if Jung’s view of synchronicity is to be believed, such moments of linkage between a collective consciousness would reveal some transcendental truth, but how are we to interpret that scientifically. Since synchronicity is a completely subjective experience, based on personal thoughts and experiences occurring in an unplanned way, there is no objective or logical way to identify whether synchronicity is valid. 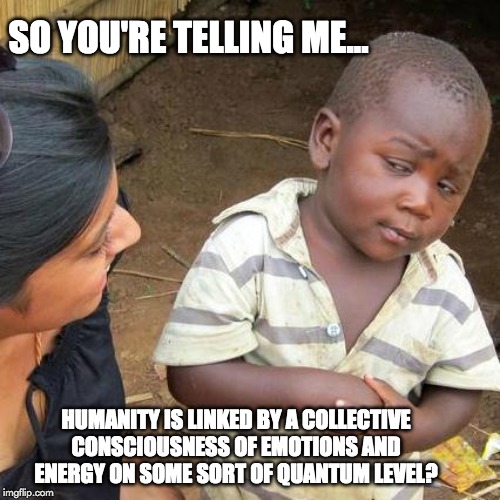 For this reason, as with many other popular theories from the early 20th century, synchronicity is now categorized firmly in the realm of pseudoscience. That being said, the word has also entered the popular lexicon, and is often used interchangeably with serendipity or coincidence. Despite not having any proven basis in science, people love pointing out moments of synchronicity when they pop up!

Why Do We Love Synchronicity?

Quite simply, identifying and analyzing moments of synchronicity can add meaning to people’s lives. In this apparently random and cruel universe, in which we are thus far alone, synchronicity can hint at stability, a grand plan, or deeper meaning—if you’re willing to see(k) it. This peek behind the curtain of a “deeper meaning” is why synchronicity is often tied up with spirituality and oneness. Carl Jung had a phrase or this connected field of consciousness—Unus mundus (unified world). Many people like the idea of engaging with the world not only with our physical bodies, words and actions, but also with our energy fields, emotions, psyches and memories.

If you are willing to approach life from this perspective, than coincidence, serendipity and synchronicity may indicate a connection to a more unified reality, an indication that one has tapped into the mainframe, so to speak. Synchronistic moments reaffirm the existence of such an underlying reality to those who believe in such a “unified world”. Though hardcore skeptics and those who only deal in the realm of proven science will dismiss synchronicity as wishful thinking, these experiences can be powerful, memorable, and evocative.

While Carl Jung and millions of other people over the years have taken moments of synchronicity—”meaningful coincidences”—as a sign of greater connectivity within the universe, there is no scientific basis for proving such a theory. However, everyone is free to believe and experience the world in their own way, and we certainly don’t have all the answers here at ScienceABC. However, regardless of what you believe, when a string of events and thoughts tickle the deepest parts of your mind, imbuing a completely unexpected day with intense meaning and significance, simply be grateful for humanity’s wonderful power of observation and memory.