The Cold War was a period of political and military tension between the US and the Soviet Union. The Cold War started after World War II, when the two countries no longer had any reason to be friendly to each other. Both countries began trying to undermine the other without any open hostility.

During World War II, the United States and the USSR were unlikely allies against a common enemy – Adolf Hitler and the Nazis. However, after the war, they no longer had any real reason to continue being friendly to each other.

With ever-increasing global connections, it became important for nations to practice similar economic and political policies in order to trade peacefully with each other. Unfortunately, the USSR’s Stalinist Communism and the United States’ Neoliberal Capitalism were in stark contrast, and the other’s mere was a threat to the other. Thus, the Cold War lay on the horizon, with both countries steadily trying to undermine the other without any open hostility. So, how did this dangerous rivalry start in the first place? For that, we will have to study the consequences of the horrific Second World War.

The tensions between the US and Soviet Russia could be seen as far back as 1943. After the surrender of Germany, the ‘Big Three’ – UK Prime Minister Winston Churchill, US President Franklin D. Roosevelt and Soviet Premier Josef Stalin met in Tehran to plot the direction that the post-war world would take. The one point they absolutely disagreed upon was Poland. Poland suffered terribly at the hands of Hitler’s blitzkreig. It had two governments-in-exile, one communist and the other anti-communist. Considering that Poland was the USSR’s neighbor, Stalin wanted the communist government to rise to power. This would help the Soviet Union, as Poland would then act as a buffer from further possible attacks from the West. On the other hand, Roosevelt and Churchill wanted the Polish people to choose their own government.

In 1945, another conference was held in Yalta between the Big Three. Stalin insisted on the same demand. The other two then reluctantly conceded to a Communist-dominated provisional government. This government was supposed to be a temporary solution, and should have been replaced by a newer government that was chosen and elected by the public. However, the communist provisional government rigged the elections and were unfairly victorious. Thus, the Yalta Agreements were considered invalid by the United States. This angered the US government and further exacerbated their anti-Soviet stance.

The United States sunk about $2 billion dollars into the Manhattan Project to create the world’s first atomic bomb. However, Germany surrendered before the bomb could be used against Hitler. Therefore, the US targeted Japan instead to conclude the World War. One of the reasons for this was to show the global population, particularly the Soviets, what America was capable of.

For a while, America enjoyed the nuclear monopoly, but just four years after Hiroshima, the Soviets successfully detonated their own prototype nuclear bomb. Investigations further revealed that the details of the bomb had been extracted from American laboratories by Communist spies. The main reason that these spies did this was because they thought a single country should not have a monopoly over such a terrible weapon.

Thus began the US-USSR Arms Race, wherein both countries tried to outdo the other and unnecessarily created more and more nuclear bombs. This led to the invention of the hydrogen bomb, which is roughly 100 times more powerful than the ‘Fat Man’ bomb that was dropped on Hiroshima!

Nuclear warheads were soon developed that could be deployed using unmanned technology. Both countries housed thousands of such warheads, even though only 8 of them would be enough to wipe out all of human life on planet Earth! Luckily, none of them were ever deployed. Nevertheless, the fear of them being detonated, even by mistake, still lingers. In 1946, George Keenan sent a lengthy memorandum regarding the Soviet Union to his superiors in Washington, which has now come to be known as the ‘Long Telegram’. He was in Moscow at the time and he informed Washington that the USSR intended to spread its influence as much as possible throughout the world. He suggested that America should take up the responsibility to contain the Soviet Union’s expansive tendencies, and recognize the Russians as nothing more than bitter rivals. One of the 8000 pages of the long telegram, wherein Keenan condemns the Stalinist regime

This belief structure became official American policy under President Truman and was called the Truman Doctrine. Under this Doctrine, the US acknowledged its free reign to instigate violence in regimes that they considered to be totalitarian. Although technically it applied only to the crises in Greece and Turkey at that time, in retrospect, it was this Doctrine that led to USA’s global policy of containing every incident of Communist sentiments, such as the Korean war.

During the Second World War, Korea was occupied by the Japanese, but after Japan’s surrender, Korea had other problems to deal with. The northern part was controlled by the Soviets, while the southern part was in the hands of the Americans. Once both armies retreated, they left behind two drastically different Koreas. The North Korean leader, Kim Il Sung, wanted to take over the militarily weak South Korea for himself.

America, with its doctrine of containment, was furious at this development. US troops were immediately dispatched to help South Korea fight against North Korean dictatorship. Kim Il Sung was desperately trying to hold on to his position, and to gain some sort of advantage, he approached Stalin for military support. Stalin redirected him to his newly Communist neighbor, China. Chinese leader, Mao Zedong, was afraid that American troops would occupy North Korea and then move forward to ‘liberate’ China from communism. Thus, the Chinese army did not hesitate to engage the USA on the Korean battlefield.

The two sides eventually reached a stalemate and the fighting stopped. In a way, the Korean War continues to this very day!

Political and military support related to the fight against Communism was also accompanied by economic foreign policies, such as the Marshall Plan. The USA was afraid that the carnage induced by the Second World War would destabilize European nations, making them more susceptible to forming Communist parties. To prevent that, George C. Marshall devised a massive program of financial assistance to these nations. However, as the core of this plan was American capitalist investments, the Communist nations of Eastern Europe could not benefit from its advantages. The entire Soviet bloc withdrew itself from participating in this policy.

Eventually, Truman’s popularity began to wane, as many people thought he was too soft on the Communists. Eisenhower, famous for his feats as a general in World War II, suggested more aggressive tactics. He was inevitably elected President of the United States in 1952. He began attacking the growth of Communism through covert operations with the CIA. The resentment for the CIA’s involvement in overthrowing the popular Iranian government under Mohammed Mossadegh resulted in the Anti-American sentiments of the Iranian Islamic Revolution and strengthened the Soviet bloc.

Korea was not the only country to be torn between the Americans and the Russians. Germany also faced a similar fate.

After World War II, Germany was divided between the four Allied Powers – USA, the United Kingdom, France and the USSR. The capital city of Berlin was further divided into four zones between the four Allies. The Allies had vowed to help the Germans get back on their feet after the destruction left in the wake of Hitler’s actions. 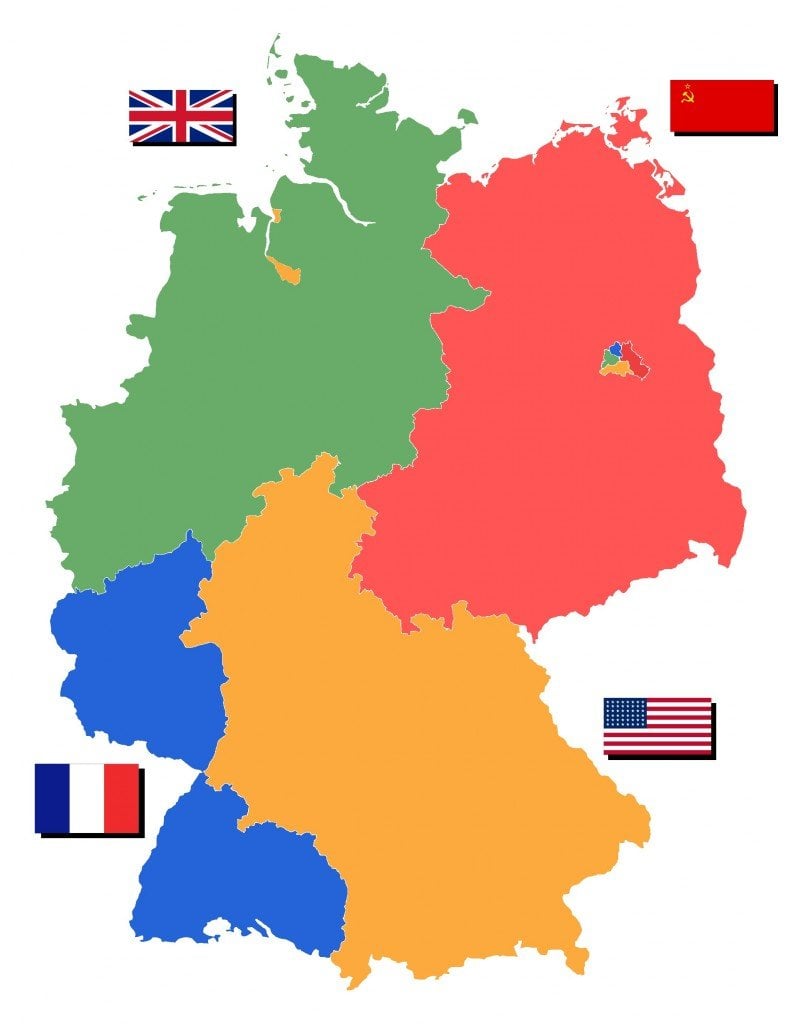 As we all know, Hitler had trampled all over Europe only to land in the frozen, unforgivable land of the USSR. Hitler ended up killing about 20 million Soviet citizens, which is 60 times more than the American casualties! Russian animosity for the Germans was therefore burning with such intensity that Stalin made no attempts to help rebuild Germany. The Eastern zone under the USSR’s rule remained backward in comparison to the other zones.

By 1948, the Western Allies combined their three zones under one administration, which eventually became the Federal Republic of Germany, better known as West Germany. Stalin saw this as anti-Soviet and placed a blockade on West Berlin. This USSR-controlled zone strengthened further to become the German Democratic Republic, also known as East Germany. The country remained divided like this for the next 40 years.

The Wall literally cemented the absolute hatred between the USA and the USSR. The Cold War was thus inevitable in a world torn between Western Capitalism and Soviet Communism. It lead to disastrous events, such as the war in Vietnam, the Cuban missile crisis, the Soviet occupation of Afghanistan and many more unfortunate events. Fortunately, the communist experiment failed and the threat of the Cold War is now nothing more than history!